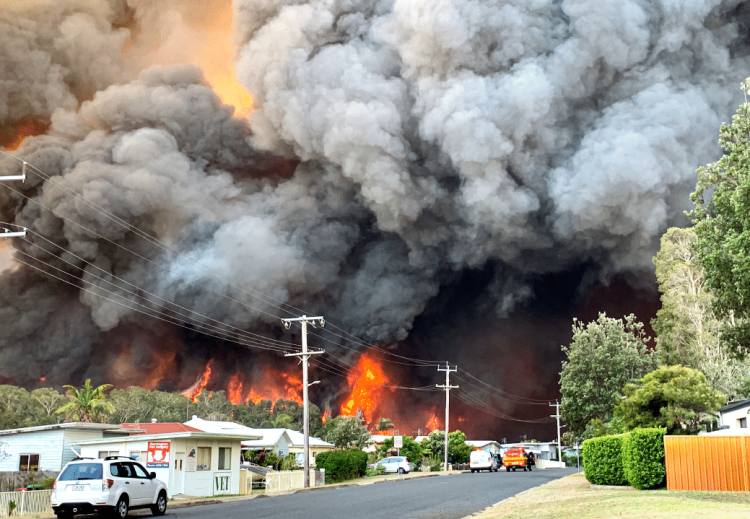 Where there’s smoke, there’s a greater risk to health

Introduction by Croakey: Lives were lost and homes and buildings destroyed in the 2019-2020 bushfires, one of the worst Australian seasons on record.

New research into the Victorian bushfires is now revealing the indirect consequences of the fires on health, with some surprising results and practical recommendations for policymakers and health authorities.

The research found that urban, inner-city hospitals and working-age adults were most affected by bushfire smoke, findings that have not been reported widely in the media. The findings are timely, with communities east of Perth under threat from a massive bushfire that has already destroyed scores of houses.

Last January south-eastern Australia was ravaged by bushfires. This January it was Western Australia and South Australia’s turn, with fires around Perth and Adelaide. Climate change – the warming of the globe – is making Australia’s bushfire season longer and more intense.

A Grattan Institute report, Climate change and health, released in December, argued that health systems need to be better prepared for bushfires and other climate emergencies.

New research by former Grattan Institute staffer Callum Shaw looks at one side-effect of bushfires – how the smoke reduces air quality which results in people who are often many, many kilometres from the fire getting sick. The research used satellite data to measure air quality across Victoria.

Inner-city hospitals and working-age adults from 18 to 64 were most affected by bushfire smoke, most likely due to their increased need to travel for work and other activities. This finding has important implications for the way that public health departments prepare for future crises, and underscores the need for better workplace safety policies during extreme air quality events.

Such research will help policymakers quantify the impact of bushfire smoke on public health so they can effectively respond to future bushfire crises. Understanding how the effects of bushfire smoke differ across demographic and geographic groups will result in more effective public safety policies and hospitals being better prepared for spikes in emergency room visits.

Bushfire smoke is associated with large increases in fine particulate matter which can travel deep into the lungs and cause a range of respiratory problems including asthma and chronic obstructive pulmonary disease.

The worse the air quality, the higher the number of people going to hospital emergency departments. The five worst days of the 2019-20 fires in Victoria accounted for roughly 50 per cent of the bushfire smoke-related visits to emergency departments for respiratory problems.

But emergency department presentations for bushfire smoke-related respiratory problems were more frequent near the central business district rather than near the actual fires, and working-aged people from 18 to 64 were more affected (up by about 6 percent on normal) than children (down 2.3 percent) or older people (up 1.7 percent). Children did not appear to be affected across the sample period, which is surprising as children and the elderly generally have less robust respiratory health than adults.

This research confirms that city hospitals as well as rural and regional hospitals have to expect more people to come to their emergency departments during and after bushfires. Hospitals will need to prepare for a spike in emergency room presentations around cities when air quality conditions deteriorate.

Proper planning will mean that hospitals have sufficient medical equipment and staff to handle a future surge in the number of patients presenting with respiratory problems.

To achieve this, health departments should conduct a review of their capacity to handle a surge of patients presenting with respiratory problems. If there is a shortage of specialised staff, it may be sensible to transfer pulmonologists from suburban hospitals to inner-city hospitals on days where forecasted air quality is hazardous. If there is a shortage of equipment in inner-city hospitals, then it may be wise to move some specialised equipment from suburban to inner-city suburbs.

And, of course, preventing people from being exposed to bushfire smoke is better than treating them after they have been exposed. At the height of the COVID-19 crisis, many businesses and schools quickly switched to working and learning from home. Businesses and schools should consider whether some or all of their people could stay home on days of poor air quality because the research findings highlight the serious risks associated with travelling and being outside during extreme bushfire periods.

Policy changes could include encouraging office staff to work from home during extreme pollution events and closing high-risk workplaces such as construction and outdoor retail. This would minimise the number of people that need to travel for work, which will drive down the amount of particulate matter those aged 18 to 64 will be exposed to. Lower exposure should help decrease the number of working-age adults who get admitted to emergency rooms during and after bushfires.

It would also be useful to replicate this study with data from New South Wales and Queensland. Air quality in Sydney was persistently high for an extended period in 2019-2020, so it would be interesting to see how fires around NSW impacted on respiratory emergency department presentations. A nationwide study would enable us to compare our work with other research and add more value to the national policy debate.

Dr Stephen Duckett is Health Program Director at The Grattan Institute. Callum Shaw’s research, ‘Seeing through the smoke: Evaluating the respiratory health effects of the 2019-2020 Victorian bushfires’, was submitted for his Bachelor of Commerce (Honours) degree at Monash University.

PrevPreviousVaccine rollout must respect the rights of patients in diverse communities
NextPerth is the latest city to suffer a COVID quarantine breach. Why does this keep happening?Next