Where to after “profoundly disappointing” Closing the Gap report? Justice targets, renewed funding, and much much more 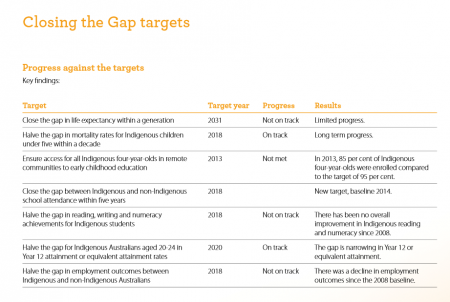 Pressure is growing on Prime Minister Tony Abbott to add justice targets to the nation’s Closing The Gap strategy to work to reduce the current rate of Indigenous incarceration – although he showed no signs of interest today as he handed down the “profoundly disappointing” 2015 Close the Gap report card. See the summary (pic, above left) and his speech.

The need to develop Closing the Gap targets to reduce imprisonment and violence rates and programs funded through justice reinvestment measures was one of nine recommendations from the Close the Gap Campaign Steering Committee, released to coincide with the Prime Minister’s statement. See their media release.

Opposition Leader Bill Shorten also called for a justice target as an “essential plank” in the Closing the Gap framework, saying “it is time to speak out against this silent emergency”. Warren Mundine, chair of the Prime Minister’s Indigenous Advisory Council, said there needs to be more focus on the number of Aboriginal children in the criminal justice system.

“If you lock people up in detention centres you’ve virtually got them for life … we’ve got to put a huge focus on that area,” Mundine told the ABC.

“To me, it was a ticking time bomb when I first came into the job. That time bomb is starting to blow up in our face.”

In its 2015 Progress and Priorities report, the Steering Committee has also warned that hard won Aboriginal and Torres Strait Islander health gains are further at risk from the 2014-15 Federal Budget cuts (the Report Card is based on 2012–2013 data). 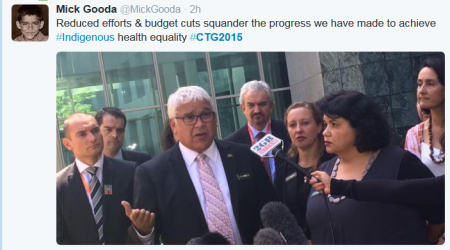 Headed by Social Justice Commissioner Mick Gooda and Kirstie Parker, it called on the Government to revisit its decision to discontinue the National Indigenous Drug and Alcohol Committee, restore and increase funding to the Tackling Indigenous Smoking program, develop a dedicated Aboriginal and Torres Strait Islander mental health and social and emotional wellbeing plan and a comprehensive Implementation Plan for the National Aboriginal and Torres Strait Islander Health Plan.

Aboriginal and Torres Strait Islander organisations have been calling for a justice target for some time to no avail, despite the pre-election commitment from Indigenous Affairs Minister Nigel Scullion for bipartisan support.

Yet Abbott’s speech (which, unlike Shorten’s, did not open with an Acknowledgement of Country) was short on detail and reflection, considering the annual report card is a landmark speech, particularly for a self-declared “Prime Minister for Indigenous Affairs”. He promised to again govern for a week this year from an Indigenous community this year and to support key measures of the Forrest review on Indigenous employment (including to “end sit-down money with continuous Work for the Dole). But he didn’t address the acute funding cuts and uncertainty for Indigenous communities (in fact, a group of his MPs walked out in protest when Shorten called for the $540-plus million cuts to be reversed).

Nor did he provide any detail on the long-awaited implementation of the National Aboriginal and Torres Strait Islander Health Plan, although he did say that the Plan “does capture the voices of the community and the experts and through this plan we will continue to support families and communities to manage their health and wellbeing; to access health services when they are needed; and to reduce harmful behaviours.”

He spoke only in passing about constitutional recognition, although he said in the formal report that he hoped it would be held on the “richly symbolic” 27 May 2017, the 50th anniversary of the landmark 1967 referendum:

A referendum should be held as soon as possible once we are comfortable that we have a proposal with the best chance of success.

Rather Abbott stuck to his mantra on education, employment and community safety and put much of the onus for results back on the Aboriginal and Torres Strait Islander community, saying Closing the Gap “is not something to be granted by this Parliament to Indigenous Australians”.

The Prime Minister said: “It’s hard to be literate and numerate without attending  school; it’s hard to find work without a basic education; and it’s hard to live well without a job.” Social Justice Commissioner Mick Gooda responded, saying it’s hard to go to work or school if you’re not in good health:

Here are some of the reactions to the report:

Public Health Association of Australia: Investing in Closing the Gap is a public health priority

See also, with thanks to  @FF_notes on Twitter, the transcript of the address by Joe Morrison, CEO of the Northern Land Council, to the National Press Club today (or you can watch it here), particularly on the risks he sees to land rights in the Northern Territory.

Croakey readers might also be interested in this article from earlier in the week by Amy McQuire at New Matilda, about how the national media managed to ignore a vital Indigenous protest that was truly on their doorstep. 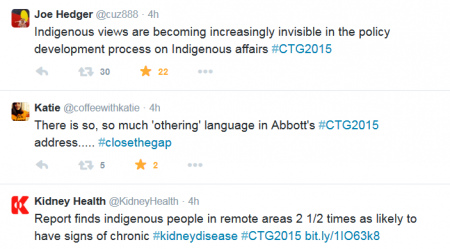 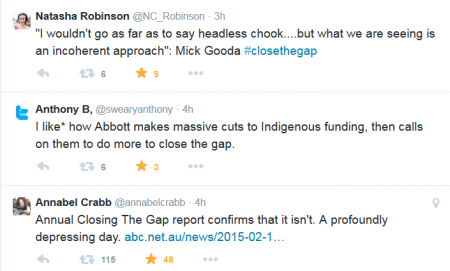 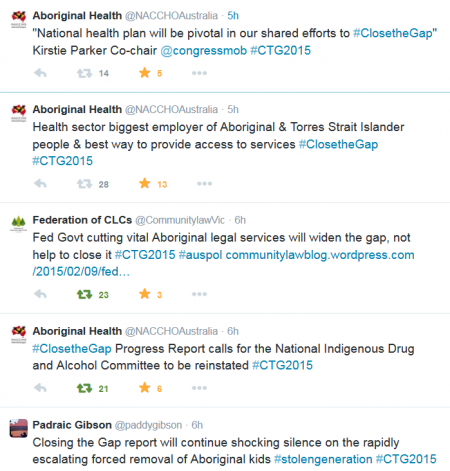 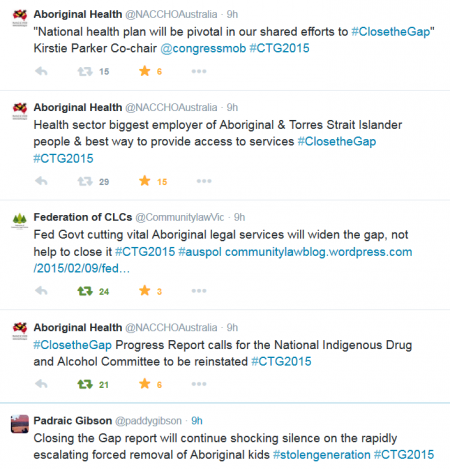 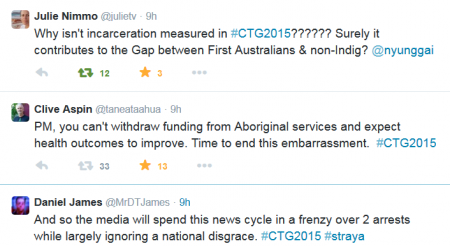 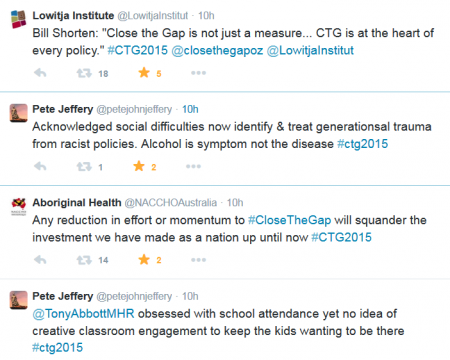 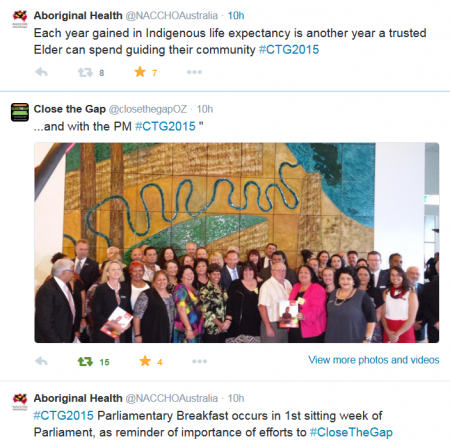 PrevPrevious“Ebola is not a natural disaster. It is a disease fostered by poverty…” Greens Senator Richard Di Natale on his trip to Liberia, Sierra Leone
NextBeing online – is it bad for your health?Next