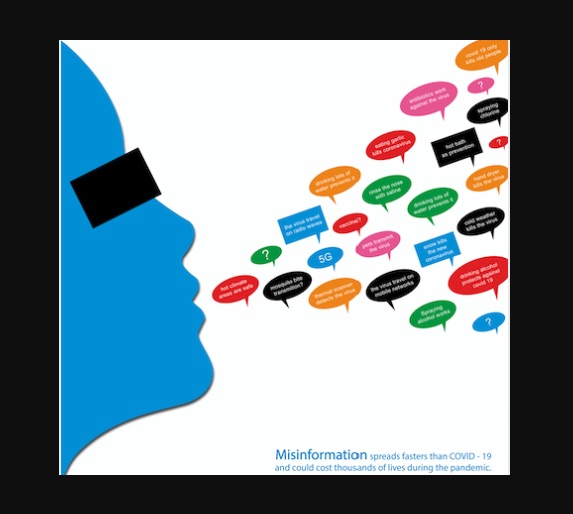 Whether a ratings chase or ideological war, News Corp’s coronavirus coverage is dangerous

Introduction by Croakey: A strong, sustainable public interest journalism sector is an important determinant of health, as we at Croakey have been arguing for some time.

Conversely, media that is not operating in the public interest can be harmful for the health of individuals, communities and societies.

At a critical time for pandemic control in Australia, the country’s most powerful media company, News Corporation, is actively undermining public health through commentary marked by racism, ridiculing of science and ideological warfare, according to a leading scholar in media ethics, Dr Denis Muller.

Meanwhile, the Federal Government today announced a $10 million grant to New Corp’s Fox Sports, for coverage of women’s, niche and other under-represented sports. The Opposition said this brought taxpayer funding of Fox Sports to $40 million over six years, and flagged concerns about transparency and process.

The country’s most trusted media outlet, the ABC, is meanwhile slashing staff, services and programs to offset an $84 million budget shortfall resulting from successive cutbacks by the Coalition Government.

The Government has rung the ABC to complain about Dr Norman Swan’s coverage, whose journalism is informed by a sound understanding of evidence and concern for the public interest. Has the Prime Minister or Health Minister rung Sky News about the nonsense being spruiked by Alan Jones et al?

Rupert Murdoch’s News Corporation, in significant parts of its coverage of the coronavirus pandemic, has become a clear and present danger to the welfare of Australian society.

Aping the worst of the American media – notably Murdoch’s Fox News – it rails against science, ridicules the measures being taken to suppress the outbreak, and tries to politicise a germ.

It also propagates hate speech, vilifying ethnic and religious minorities in whose suburbs, schools and housing towers clusters have broken out.

In all these ways, it drives divisions in Australian society and sows doubt in the minds of an anxious population about the need for lockdowns and other precautions.

Read more: Coronavirus is a huge story, so journalists must apply the highest ethical standards in how they tell it

This critique is directed primarily at its opinion articles and television commentaries, rather than at its news coverage.

The news coverage has been extensive, has included many voices, and has kept its audiences up to date with what is going on. It has also been vigorous in holding governments to account for their mistakes, which is exactly what the media should do.

But the racism, ridiculing of science and ideological warfare that has disfigured much of the commentary have nothing to do with holding governments to account or providing the community with essential information.

On Sky, Tony Abbott’s former chief of staff, Peta Credlin, launched an attack on Muslims and South Sudanese people over Melbourne’s second wave of COVID-19 that was a toxic mixture of vitriol and ignorance.

She blamed South Sudanese people living in Coburg for a cluster of 14 new infections, which she said were triggered by a feast to mark the end of Ramadan, the Muslim season of abstinence.

For those errors of fact, Credlin apologised. But her fairmindedness did not extend to an apology for a nasty rhetorical question about the character of South Sudanese immigrants in general, linking well-worn tropes about gangs, unemployment and alleged inability to speak “Australia’s national language”.

Andrew Bolt in the Herald Sun and Sydney’s Daily Telegraph was onto the same immigrant-bashing exercise. He noted that three of the worst COVID-19 hot spots in Melbourne were the Flemington towers, the Islamic Al-Taqwa College and the Cedar Meats abattoir.

Here was a trifecta for divisiveness: African immigrants, Muslims and a meatworks that, according to Bolt, employs many immigrants and donates money to the Labor Party.

Most recently, as mask-wearing was made compulsory in Victoria, Bolt and Alan Jones turned their attacks against that too. That represented a significant change and was based on new data.

In June, The Lancet, one of the oldest and most respected medical journals in the world, published an article based on a meta-analysis of 172 observational studies and 44 comparative studies into the efficacy of physical distancing, mask-wearing and eye protection as ways of reducing the risk of COVID-19 infection.

It found face mask use could greatly reduce risk of infection.

The breadth and authoritativeness of the study persuaded health experts in Australia and elsewhere that mask-wearing was now a more important part of the armoury against COVID-19 than had been previously thought.

Bolt likened this to a kind of political backflip. Jones called it “alarmism”.

They might do well to recall the remark of economist John Maynard Keynes:

When the facts change, I change my mind. What do you do, sir?

Jones proclaimed on Sky (July 20) that he had a pile of medical data stating that mask-wearing was ineffectual. He said he had done some research of his own over the weekend to support this proposition.

He went on to declare that government responses to the pandemic were shafting ordinary hard-working Australians.

Bolt stated he no longer trusted what Victorian Premier Daniel Andrews said about coronavirus. Like Jones, Bolt questioned the medical basis for the decision to make mask-wearing compulsory. 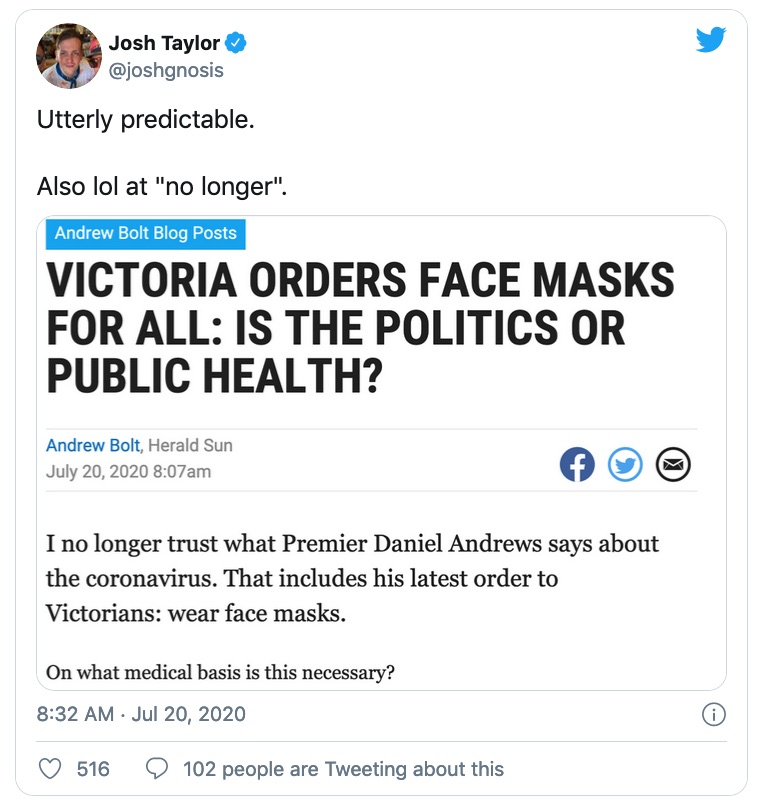 There has also been a party-political dimension to the News Corp coverage.

My analysis of 464 articles in the Telegraph on the Ruby Princess showed the coverage was extensive, quoting many voices trenchantly critical of the way the government handled the case. However, the newspaper itself made no direct personal attack on Premier Gladys Berejiklian.

A similar analysis I undertook of 411 articles in the Herald Sun about hotel quarantine and subsequent second wave likewise showed extensive coverage quoting many voices trenchantly critical of the government. But there was an additional dimension: direct personal attacks on Daniel Andrews, which has become a speciality of Credlin’s.

While the Murdoch organisation’s approach stands out as systematic and sustained, Channel Nine has also made episodic contributions to this dark side of Australia’s media performance.

Its Today program has twice disgraced itself. First it gave Senator Pauline Hanson a platform from which to make a racist attack on the people in Melbourne’s public housing towers. Then Today hosted an extreme right-winger, DeAnne Lorraine, from the United States, who says COVID-19 is a conspiracy to change the world.

Her stream of consciousness in support of this proposition included a reference to the Caduceus, symbol of medicine since time immemorial.

Fake science. And look at the snake. The snake is their logo. That should tell you everything you need to know, right there. 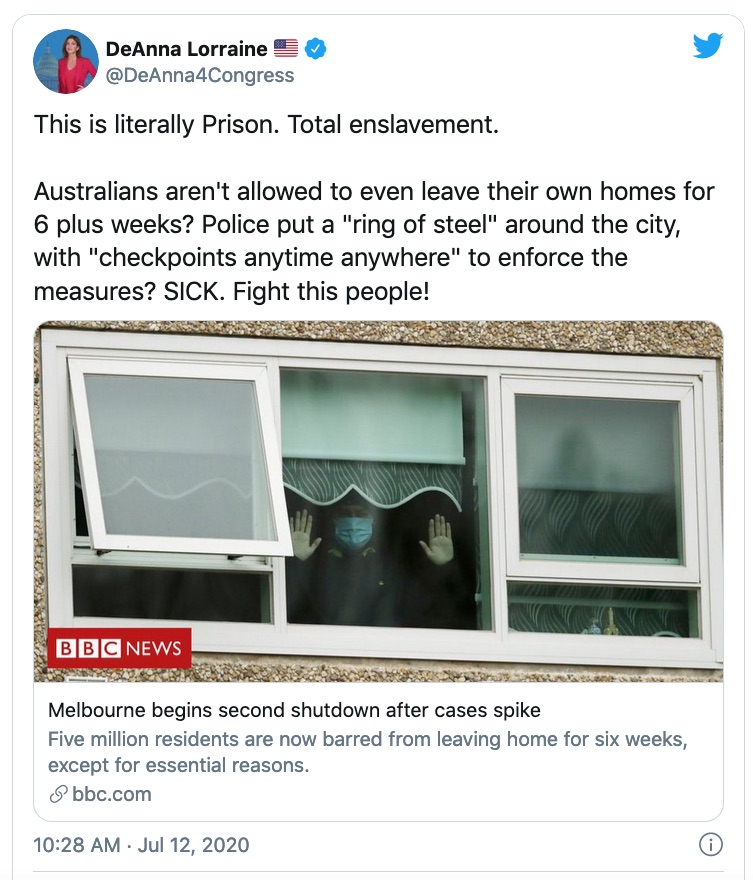 Whether the motive is to chase ratings, as with Nine, or to prosecute ideological and cultural warfare, as with Murdoch’s News Corporation, the consequences for Australian society are dire.

The coronavirus pandemic has created well-founded anxiety in people for their health and economic well-being. In times like these, there is always a tendency in human nature to look for scapegoats or to deny reality.

Read more: Media have helped create a crisis of democracy – now they must play a vital role in its revival

Media coverage of the kind described here exploits that anxiety and feeds those natural human impulses, leading to social division and resistance to medical advice.

Both these consequences work against suppression of the virus. That is why it represents a clear and present danger to society.

Dr Denis Muller is Senior Research Fellow, Centre for Advancing Journalism, University of Melbourne. He has worked in the media industry in Australia, England and Aotearoa/New Zealand.

PrevPreviousWe asked multicultural communities how best to communicate COVID-19 advice. Here’s what they told us
NextIf the Rugby League can do it, then why can’t national politics provide a fair competition?Next