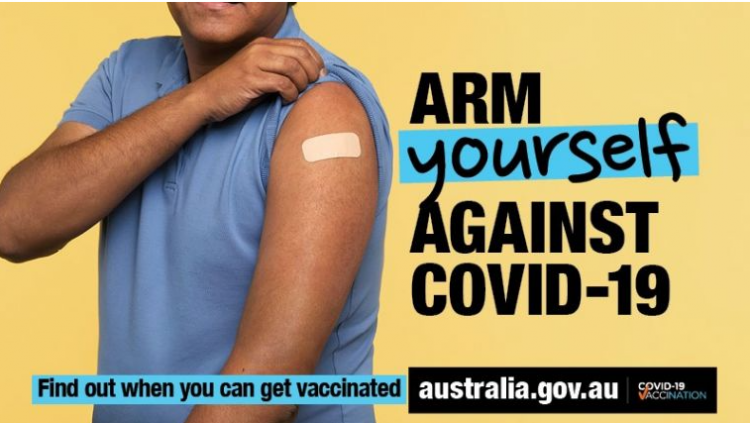 Introduction by Croakey: Protests around the world against COVID vaccinations and restrictions are increasingly being led and fed by white supremacists and far right groups and politicians.

The movement presents challenges for how the public health community conceptualises and addresses anti-vaccination concerns – especially at a time when some government advertising has reinforced militaristic framing, as per the image above, and the ‘freedom’ mantra as per these recent newspaper advertisements.

In the article below, originally published in The Conversation, Indigenous studies academics Madi Day and Professor Bronwyn Carlson link the rhetoric and misinformation of anti-vax movements to white supremacists and far right extremists.

The rallies occurred after weeks of protests in Melbourne against the Public Health and Wellbeing (Pandemic Management) Bill 2021. The Monday prior, protesters hung an inflatable effigy of Victorian Premier Daniel Andrews on a gallows assembled in Melbourne’s CBD.

Moments like these connect anti-vax movements to far right and white supremacist extremist groups and conspiracy communities in Europe and white settler nations around the world including Australia, Canada, USA and New Zealand.

Resistance to vaccinations in Australia is due to a range of mitigating factors. Vaccine hesitancy and resistance to pandemic legislation among minority communities including Indigenous and culturally and linguistically diverse communities, is due to institutional distrust caused by centuries of colonial medical and legislative violence. This could be the reason why some members of these communities are taking part in protests.

White supremacist and right-wing groups are capitalising on vaccine hesitancy to distribute conservative ideologies to new audiences via protests and social media. Among these are complex narratives about resisting a “New World Order”, which supposedly threatens a bygone Australian way of life.

Many involved in these movements probably do not realise they are aligning with people whose values and ideas are steeped in white supremacy.

Many groups have united under the banner of COVID denial and vaccine resistance. A common narrative shared on social media is that COVID, lockdown measures and vaccinations are part of a plan to implement a global totalitarian regime.

In September this year, a comment by New South Wales Chief Health Officer Kerry Chant went viral among COVID deniers and conspiracy theorists, including those involved in QANON. Chant responded to a question about how contact-tracing would work after lockdown by saying “We will be looking at what contact-tracing looks like in the new world order”.

Conspiracists in anti-vax circles have been using the term “New World Order” to refer to the theory that a secret group of powerful elites are planning global domination. Despite Chant’s intentions, mention of the term provoked a frenzy on social media and caused Google searches to skyrocket.

New World Order theory has racist and anti-semitic inferences. It comes from speculative and philosophical literature from Europeans and white settlers in the United States who have promoted paranoid myths about Jewish people’s involvement in the banking system. It has ties to fascism, racism and white libertarianism, and Satanic Panic since the second world war. It also has ties to Nazi occultism.

Essentially, resisting the “New World Order” is less about addressing existing systems of power including capitalism and colonialism that oppress and marginalise groups of people all over the world. It’s more about a battle between a perceived good and evil.

These ideas also have a long history in Christian literature including the New Testament. White Christian extremists, including the Klu Klux Klan, refer to themselves as knights engaged in a holy war to defend their liberties from racial and religious others whom they have historically oppressed.

Anti-vax movements have proven especially appealing to white women and groups of men who feel disadvantaged by rapid changes in Western society, which have destabilised their economic and social standing.

Many anti-vaxxers believe they are resisting evil globalist forces who want to corrupt them and their children by means of tracking devices, microchips and other insidious technology allegedly hidden in COVID-19 vaccines.

Protestors carry signs inferring their sperm is untainted by the vaccine, and unvaccinated users on Tiktok refer to themselves as “purebloods”. These sentiments echo white race anxieties popularised during the Aboriginal Protectionist and White Australia Policy Era, which continue to influence Australian immigration policy and Indigenous Affairs to this day.

Conservative family values are apparent in anti-vax movements. For example, protestors in Sydney on Saturday recycled “You Can Say No” posters originally used against the ballot for marriage equality in Australia in 2017.

Far-right politicians and organisations have capitalised on rapid change and experiences of economic crisis during the COVID-19 pandemic to promote ideologies about protecting traditional family values and Western culture.

Political proponents of the anti-vax movement, such as Clive Palmer and Craig Kelly, are also anti-immigration and climate deniers. The current party line for the United Australia Party is “Make Australia Great”, mimicking Trump’s former campaign.

Kelly and Palmer are capitalising on anti-vax sentiments to gain visibility at protests and on social media. Mainstream right-wing politicians have also participated in rallies including former chief of staff to Tony Abbott as prime minister, Peta Credlin.

Known members of pro-fascist, white supremacist and neo-Nazi organisations, including Proud Boys and Lads Society, have been present at anti-vax rallies. These organisations have also been involved in organising and security for speakers.

Outbreaks of COVID-19 have already had devastating impacts in Aboriginal and Torres Strait Islander communities. Community leaders and organisations are battling the spread of misinformation in Aboriginal remote communities including myths spread by Christian groups that claim COVID-19 is a white man’s virus. Spreading anti-vaccination propaganda among Indigenous communities has severe and life threatening consequences.

It might seem like anti-vaxxers and far-right extremist groups are minorities in Australia. However, far-right political parties who spread vaccine misinformation are gaining followers.

The United Australia Party has been actively distributing misinformation about COVID-19 and the controversial drug ivermectin.

It remains to be seen how the growing influence of the far right will affect upcoming elections and our futures. We need to think carefully about the ideas and movements we are invested in now, and who they are actually benefiting.

PrevPreviousCalling for the health sector to engage with “radical, bold and brave” initiatives to save the planet
NextThe Health Wrap: disrupted scientific careers, developments in maternity care, Thanksgiving – and “Hurricane” HawkinsNext