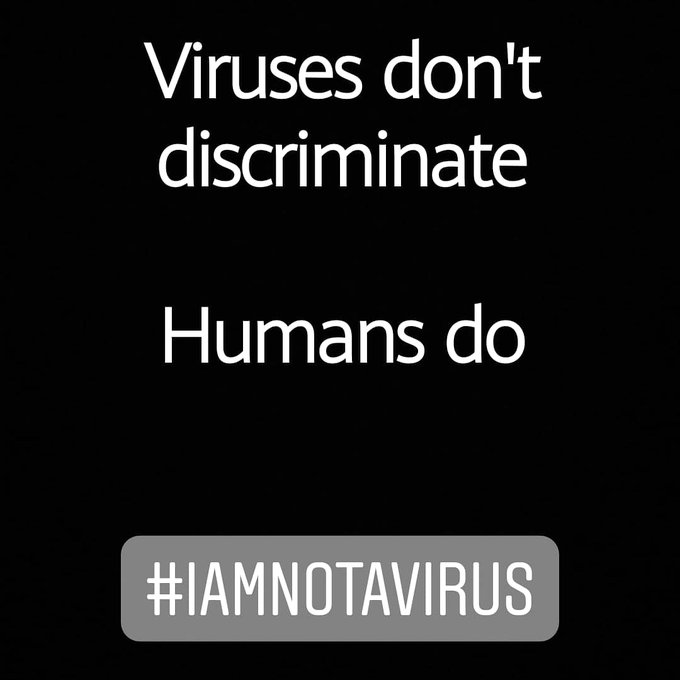 WHO calls for “solidarity, not stigma”, “science, not rumours” on coronavirus

The World Health Organization (WHO) has called on countries like Australia to reconsider travel bans imposed in the face of the coronavirus outbreak, warning that they “can have the effect of increasing fear and stigma, with little public health benefit”.

Australia is one of several countries, including the United States, the United Kingdom, Singapore and New Zealand to introduce a travel ban for non-citizens who have been to China in the past 14 days, including people who have travelled through the country.

Others, like Canada, have chosen not to, or, according to reports from some European nations, not yet.

We reiterate our call to all countries not to impose restrictions that unnecessarily interfere with international travel and trade. Such restrictions can have the effect of increasing fear and stigma, with little public health benefit.”

Where such measures have been implemented, we urge that they are short in duration, proportionate to the public health risks, and are reconsidered regularly as the situation evolves.”

The call comes amid continuing health and human rights concerns about responses to the outbreak. As well as clinical issues, the outbreak and responses to it are raising questions about whether the WHO has sufficient powers and oversight, and how  nations with stronger health systems can support more “fragile” countries.

In case you missed it last week, please also see Croakey managing editor Melissa Sweet’s comprehensive piece on human rights risks now evolving with the outbreak, including the choice of Christmas Island as the main quarantine site for Australians returning from Wuhan against the advice of the Australian Medical Association.

There are also growing concerns about misinformation and fear mongering in both traditional and social media that has, according to global health expert Ilona Kickbusch, reached “extraordinary heights”.

That’s been seen at many levels in Australia, including a Facebook post purporting to be an official notification from the Queensland Health Department warning against “non-essential” travel to a number of Brisbane suburbs.

Federal Minister Peter Dutton also fed some fear-mongering on Wednesday, flagging that any further evacuees could be sent to isolated mining camps if Christmas Island reaches capacity for people being quarantined.

See below for the warning issued by the Australasian College for Emergency Medicine on racial profiling and sensationalist media reporting, as well as some “some controversial suggestions” from Kickbusch on WHO governance, media watchdogs, and a political mechanism to call out non-compliance with WHO recommendations. 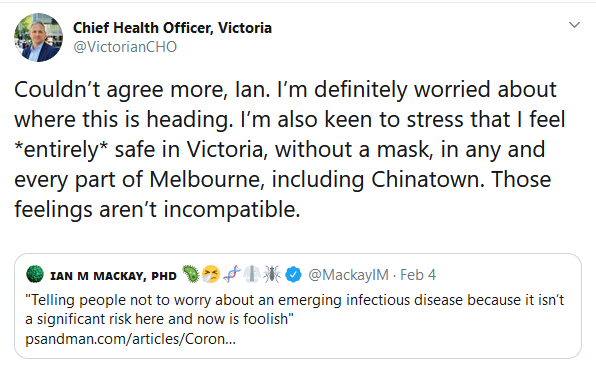 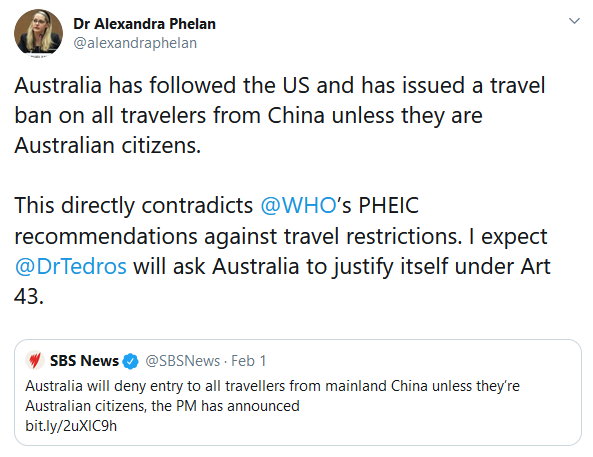 The WHO has said that its public health emergency recommendations are “non-binding but practically and politically significant measures that can address travel, trade, quarantine, screening, treatment”. In a number of tweets this week it said:

WHO can also set global standards of practice.

WHO can hold countries to account when they needlessly exceed these global standards. This is critical to ensuring the international response is evidence-based, measured & balanced to protect human health in ways that are neither over-reactive nor under-reactive.”

Whether or how countries that ignore or defy WHO recommendations will be held to account is unclear.

In the lead up to determining whether to declare the coronavirus a Public Health Emergency of International Concern (PHEIC), the WHO said that governments implementing additional health measures that significantly interfere with international traffic (such as refusal of entry or departure of international travellers) are obliged to send to it the public health rationale and justification within 48 hours of their implementation.

This week Croakey asked the WHO whether or not Australia had submitted a rationale about the travel ban or been asked to do so. A spokesperson in Manila told us by email:

The Emergency Committee convened by WHO Director-General Dr Tedros on the novel coronavirus (2019-nCoV) did not recommend restricting travel and trade at this time, based on current information about the outbreak.

Countries that have already implemented temporary travel measures are requested to notify WHO as required under the International Health Regulations.

WHO is ready to provide advice to any country considering implementation of such measures.”

Croakey has put a number of questions to Minister Hunt’s office, including whether it has sent a public health rationale to the WHO on its travel ban.

We will update this post when we receive a response. 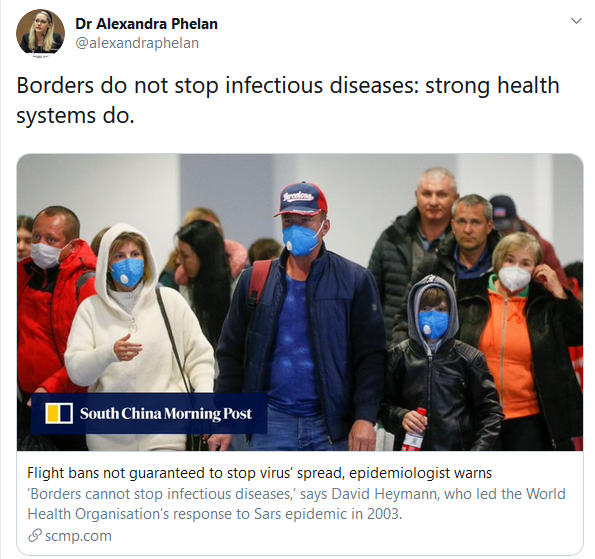 Also via Twitter, WHO Director General Tedros Adhanom Ghebreyesus has called for an unprecedented response to the coronavirus outbreak, driven by global solidarity and collaboration and built on evidence-based action.

He says that includes to:

As well as reiterating the WHO’s call to all countries not to impose restrictions that unnecessarily interfere with international travel and trade, Dr Tedros said the global organisation was also increasing its communications capacity to counter the spread of “rumours and misinformation”.

It is tweeting coronavirus myth-busters via the #KnowTheFacts hashtag. 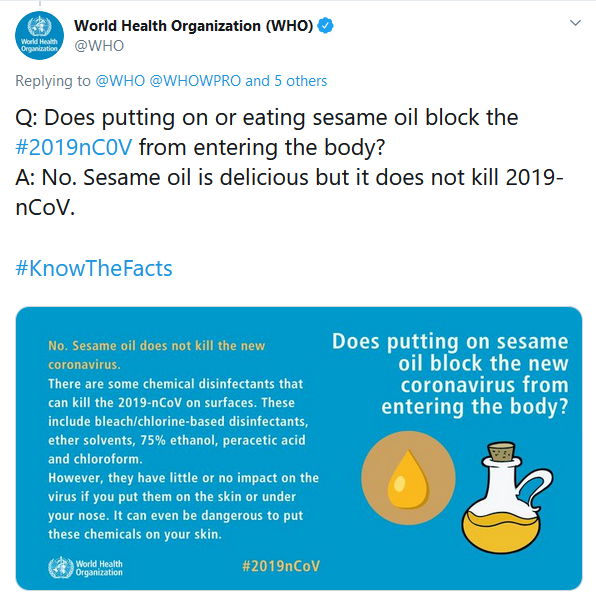 But it’s also warning about more than snakeoil cures, saying:

That’s the message also from the Australasian College for Emergency Medicine (ACEM), which issued a warning amid concern for both hospital staff and patients.

Dr Lai Heng Foong, Chair of ACEM’s Public Health and Disaster Committee said the college was deeply concerned about  “misinformation which has been spread among the public, as well as deeply distressing assumptions being made about ‘Chinese’ or ‘Asian-looking’ people, from some patients and families, as well as online, which amount to little more than racial profiling.”

Calling for action from governments and greater social responsibility from the media, ACEM Immediate Past president Dr Simon Judkins said:

“It is incredibly distressing to see that a health emergency like this can deteriorate into a situation where some choose to promote racism and xenophobia. The feedback we have from members regarding concerns about racial profiling; and sensationalist reporting from some sections of mainstream and online media is unacceptable.

“Unfortunately, our members are reporting an increase in instances of racism within EDs, with patients and staff of Chinese appearance being subject to racist abuse.”

Dr Kickbusch, who Director of the Global Health Programme at the Graduate Institute of International and Development Studies, and her colleague Gabriel Leung have written this week about the need for new forms of governance to better manage our response to pandemics, saying preparedness systems are always designed to deal with the immediate past pandemic and never the next.

They wrote in the BMJ:

We just came out of a cycle of the World Health Organization (WHO) under calling Ebola and over calling the 2009 swine flu outbreak. Now we are once again playing catch up with 2019-nCoV.”

They are seeking to open debate on a range of contentious areas, including that “not only has declaring a Public Health Emergency of International Concern (PHEIC) lost its meaning and power, the fact that there are no independent observers during an outbreak, assessing what is going on in countries, opens the door for speculation, political gamesmanship, and misinformation”.

They also say that, while transparency is “paramount”, there clearly needs to be a set of rules to which both traditional and social media need to adhere to in such critical situations, where “misinformation and fear mongering around the 2019-nCoV outbreak has reached extraordinary heights”.

The key aim is to sow mistrust: bots attack the WHO and respected journalists, anti-vaxx supporters are given platforms to spread conspiracy theories, and racist commentary abounds.

According to WHO, the tech giants including Google, Facebook, Twitter, Tencent and TikTok are “joining in to help share accurate advice and defeat potentially dangerous misinformation”.

Kickbusch and Leung propose effective media watchdogs to monitor how disease outbreaks are reported and for the global community to look for transparency beyond the social media platforms.

WHO could reach out to existing watchdog groups exploring cooperation. They could also study whether information has been held back and if critical informers or journalists have been silenced.”

That will make interesting watching as this crisis evolves, continuing to echo the words of former WHO Director General Margaret Chan during the 2014 Ebola outbreak: “Rumours and panic are spreading faster than the virus“. 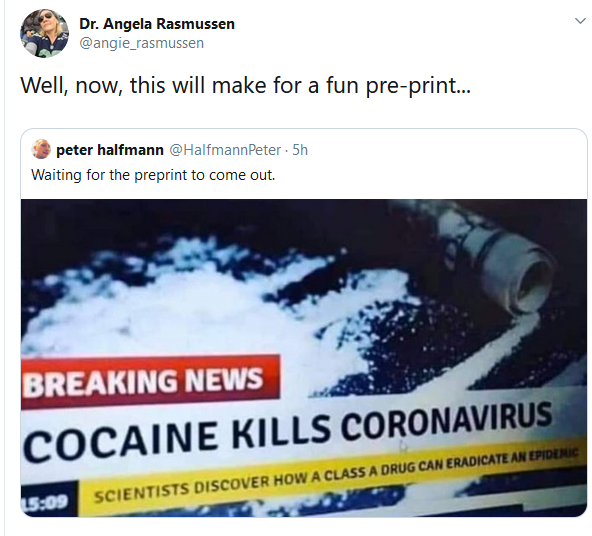 Here are some articles on “viral fake news” and tips for journalists and media:

Tips for journalists and media organisations covering the coronavirus

Is reporting of the coronavirus producing viral panic?