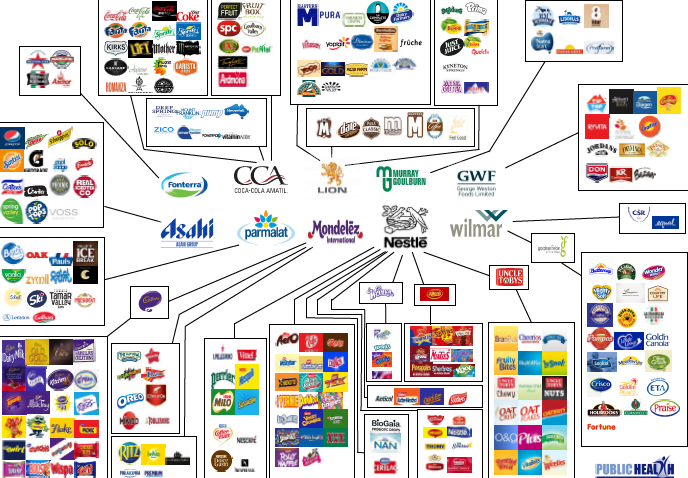 Who owns who in the Australian food market?

It may seem as though we have an endless choice of brands when we are shopping at the local supermarket. But delve a little deeper and our choices are in reality much more constrained.

Work undertaken by Dr Melissa Stoneham and Ainslie Sartori from the Public Health Advocacy Institute of WA (PHAIWA) shows how a small number of large and mostly foreign-owned companies own a significant proportion of brands in the Australian grocery market.

Below, Stoneham and Sartori discuss the public health implications of these findings, in particular, as they relate to the sponsorship of sport and the ability of consumers to make informed choices about their grocery purchases. 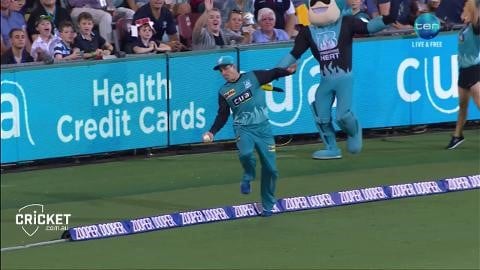 What is not quite right about this picture?

Sponsorship in sport is commonplace. Name recognition, brand reputation and greater sales are some of the obvious benefits. Yet we know that sponsorship of development programs and sport offers companies an avenue to expose children to their brand and foster a connection between children and their brand. In 2013, a Perth study of five- to 12-year-olds found they could associate team sports with the products and messages promoted via the sports’ sponsors.

So back to the photo. In this case, Zooper-Dooper is a sponsor of the Perth Scorchers. Zooper-Doopers are ready -to-freeze icy poles available in most retail outlets. They come in “8 cosmic flavours”, and with 12.7 grams of sugar per serve, you would class them as an unhealthy sponsor. Not wanting to appear to be too nannyish, one might suggest that a Zooper-Dooper is a lesser evil than an online gambling, fast food or alcohol sponsor.

Yet, the story gets more interesting when you delve a little deeper to identify which company owns Zooper Dooper. In this case, Zooper-Dooper, which also sponsor the Big Bash League, is owned by major alcohol company Lion.

This revelation was uncovered by research conducted by the Public Health Advocacy Institute of WA  to determine the influence of major companies and their corporate social responsibility initiatives in the Australian food landscape.

We identified the top 10 companies in the food market, based on revenue. A map demonstrating Australian food ownership and brand families was then produced.

The map (above) shows the diverse influence each company has over the Australian food market, with a small number of companies producing a significant proportion of well-known brands.

Due to the diversity of brands, individual companies are able to target different demographics with different product brands. We have seen this with Mount Franklin water, which is actually owned by Coca-Cola Amatil. Mount Franklin Water is a major sponsor of the McGrath Foundation, is the official beverage supplier of Netball Queensland, and sponsor the Brisbane Roar.

PHAIWA’s primary concern is companies that produce unhealthy commodities, but are then using subsidiary brands in their community outreach initiatives (e.g. sporting club sponsorship) which primarily target children. For example, Nestle owns Milo. Milo has been a major sponsor of Cricket Australia since 1992, and sponsors the grassroots cricket programs Milo In2Cricket and Milo T20Blast (targeted at kids aged 6-12).

Mondelez, Australia’s eighth largest food company by revenue, has Cadbury within its brand family.  Mondelez has committed over $3 million to a three year partnership with Football Federation Australia to create the country’s largest healthy lifestyle program for kids.

Other major findings of this research identified that the majority of major food companies in Australia are foreign owned, with Murray Goulburn at present the only Australian owned and operated company. Brand ownership per company ranges from four to seventy-six brands each, with Nestle producing the most brands in the Australian market, owning 76 individual brands. The majority of products produced by the top 10 Australian companies are discretionary in nature (i.e. unhealthy).

We also identified that of the ten food companies on the map, three are major alcohol producers – Asahi, Lion and Coca-Cola (which manufactures and distributes Jim Beam and Cola for the Australian market). These companies produce a number of non-alcoholic beverages and food items, which they utilise for numerous sporting sponsorships. These marketing tactics are smokescreens where companies that sell primarily unhealthy commodities are using healthier brands to access environments where children congregate.

This research has identified that given the diverse brand ownership of each company, it is important to understand how companies use wide-ranging brand ownership to target specific demographics, and improve overall company image. This knowledge will enable more targeted advocacy against the sponsorship of various community programs by companies who are deemed unhealthy.

Finally, from the consumer’s perspective, being more aware of who owns who in the world of food production will allow connections to be made between products they purchase and other brands owned by the same company, particularly when they produce a range of unhealthy commodities.