Home Public health and population health nanny state Whose problem is it anyway? Transforming the public health narrative to stem the tide of “lifestyle drift”. 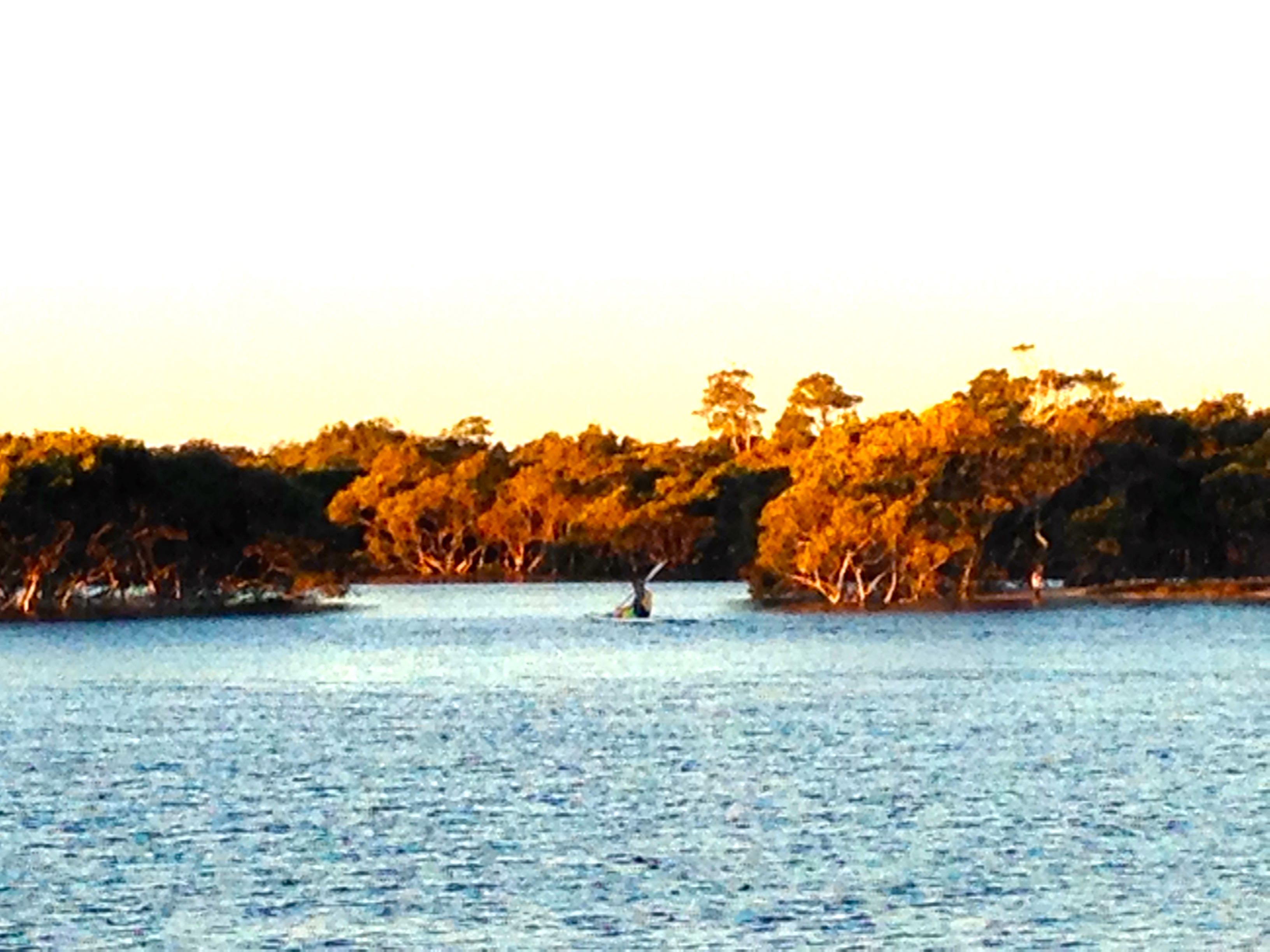 Whose problem is it anyway? Transforming the public health narrative to stem the tide of “lifestyle drift”.

Why is it that, while we know it’s the big issues, such as social disadvantage, lack of education and powerlessness, that have the most effect on health, we often focus on the smaller things as the basis for intervention: things based on personal choice, individual actions, and “lifestyle”?

An interesting paper, published recently in the journal, Health Promotion International sheds some light on this question, and suggests ways of balancing upstream and downstream factors when designing health interventions.

Below, the authors of the paper introduce the important concept of “lifestyle drift”, with the hope that a little awareness might just help us swim against the tide.

In areas as disparate as vaccination rates, heart disease and obesity, public health experts have long tried to point out the importance of addressing the social determinants of health (such as income, gender, ethnicity, and education) in forming policies aimed at improving the wellbeing of the population.

In practice, however, while policy ambitions start upstream at a broad population level, they soon “drift” downstream, becoming targeted at individual actions and responsibilities. This is sometimes referred to as the ‘lifestyle drift’ phenomena – where initial policy commitments that begin as universal become targeted at individuals during implementation.

Consider for example the many programs aimed at reducing obesity. The broadest goal of these programs is often to reduce population-level obesity but, over time, they become social marketing campaigns to encourage physical activity and healthy eating for individuals. These types of behaviourist intervention do not (in isolation) have the power to change any of the driving social determinants of obesity.

Lifestyle drift refers to both:

This trend towards individual level policy initiatives looks set to continue with ‘nudge politics’, the next wave of behavioural interventionist policies for reducing obesity that have recently come into fashion in the United States, UK and Australia.

To address the problem of lifestyle drift we need to better understand why public health policy has a tendency to drift from the universal to the individual. Our new work proposes that the sociology of social problems, specifically a framework known as the ‘residualist conversion model’, (originally outlined by Jamrozik and Nocella in their book, The Sociology of Social Problems: Theoretical Perspectives and Methods of Intervention) can help us to understand and manage the problem of ‘lifestyle drift’. We explore these issues through the case of obesity.

The residualist conversion model  is a framework that seeks to understand why some problems are framed as individual problems and others as social problems, and how this plays out for the interventions designed to deal with social problems. The reasons underpinning which issues gain prominence, and whether they are cast as social problems, are of longstanding concern to both sociology and political science.

The idea of a social problem invokes a general condition (such as an increase in the prevalence of obesity in a population) whereas a personal problem is specific to an individual (such as their own obesity). Most social problems do not occur equally across our society, leaving specific groups open to being described as the ‘problem’ themselves.

So, while the causes of a social problem such as obesity might be well explained by examining our social relationships (for example, the distribution of social resources), the social problem’s association with specific groups of people means that it can quickly be seen as a problem characteristic to the groups that experience the problem acutely (eg: people on low incomes who experience obesity).

In the case of obesity, this occurs when obesity is framed as a problem belonging to the obese, rather than a manifestation of power dynamics between people. The framing of obesity is key.

Below is the residualist conversion model as it appears in our recent work unpacking lifestyle drift. 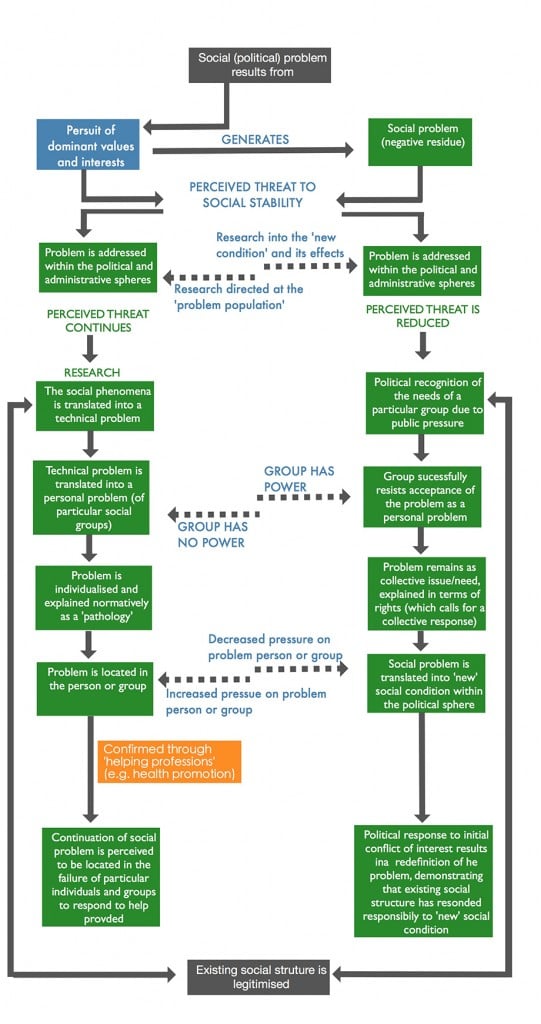 Residualist conversion model [as appears in Carey et al, 2016 and adapted from Jamrozik and Nocella, 1998].

Whether or not a social problem remains in the social sphere (and is therefore seen as an area for government intervention) or an individual problem (subject to individual responsibility) is dependent on the power dynamics between the people experiencing the problem and the broader social order.

If we continue with the case of obesity, the residualist conversion model suggests that, theoretically, if obesity affected high income groups at a disproportionately higher rate to low-income groups then the inherent power of this group would mean that obesity remained in the political sphere.

So how can we manage lifestyle drift? The final section of our work concentrates on balancing upstream and downstream approaches, and the development of frameworks that can help the public health field to achieve this balance.

Upstream and downstream approaches are not simple opposites but sit along a continuum. Work by Carey et al demonstrates that upstream and downstream approaches can be combined in a complementary framework when treated with a nuanced understanding of the strengths and appropriate application of each. Such frameworks are likely to be indispensable for striking a balance between universal approaches that promote equity (e.g. maintain a problem in the social sphere), and the need to cater to the specific needs of groups that experience differing levels of risk.

For obesity prevention to avoid the observed ‘lifestyle drift’, the framing of obesity within the media, within public health itself and within government must emphasise that it’s political nature cannot be ignored. Obesity must be framed in a way that enables the state to accept it as a social problem, rather than an issue faced only by specific groups.

Work in this area is gaining traction; in America, Nierderdeppe et al have shown that obesity related narratives that emphasise the social determinants to health and associated broad scale solutions, and do not feature acknowledgment of personal responsibility, are more successful at maintaining the framing of obesity as a social problem, even among conservative political groups. We think it is crucial to see this research replicated, and the findings implemented, in other political contexts including Australia.

New research on the political contexts of the social determinants to health is now being conducted through the Centre of Research Excellence in the Social Determinants of Health Equity. The Centre aims to advance understanding on ways for government policy to work more effectively to address the social determinants to health and move towards a fair distribution of health in society, and is set to bring out more exciting new research in this field.

This research was supported by The Australian Prevention Partnership Centre through the NHMRC partnership centre grant scheme (Grant ID: GNT9100001) with the Australian Government Department of Health, NSW Ministry of Health, ACT Health, HCF, and the HCF Research Foundation.