“Why aren’t I in prison?” … Some questions about white privilege #JustJustice

Public health concerns like white privilege and racism were on the agenda at the Leaders in Indigenous Medical Education Network conference in Townsville last week (see more details in this previous post).

These are also critical issues to address in efforts to reduce the over-incarceration of Aboriginal and Torres Strait Islander people.

In his contribution to the #JustJustice project, GP Dr Tim Senior investigates white privilege and how it contributes to unfair systems.

White privilege: a barrier to #JustJustice

Why aren’t I in prison? To be sure, I haven’t committed a crime (unless you count stealing a comb from a newsagents when I was two, which my mum made me take back).

I have been fined for speeding once – and driving offences are just the sort of thing that can end up with people being put in jail. Perhaps I should think of that as a narrow escape?

The fact that I don’t consider this a narrow escape says something about the answer as to why I am not in jail.

Sit down, though. The answer to my question might make you uncomfortable.

The principle reason that I am not in jail, is that I am white. There. I said it.

Why have I come to this conclusion?

Look at the imprisonment rates for Indigenous and non-Indigenous Australians. 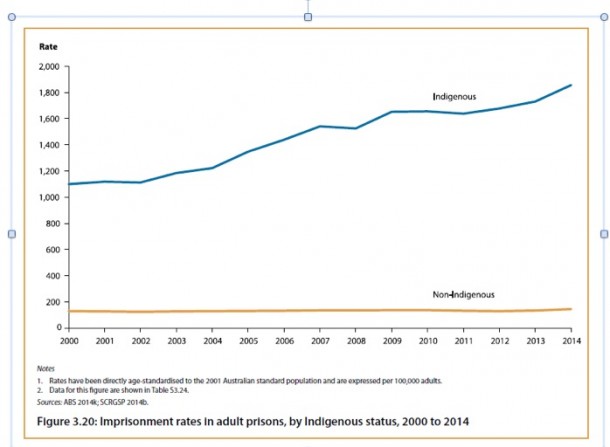 In the dark recesses of racist Facebook, you might see suggestions that Aboriginal people are just inherently more criminal. This is not only wrong, and explains nothing, it is also a deliberate way of saying “…and I don’t want to know.”

There’s truth in each of these statistics, but let’s ask again: “Why?”

There’s a theme that unites all of these reasons, in the society that produces these effects. Naming it provokes deep reactions, but once it is named and explained, it’s possible to see its work everywhere.

What is going on here is white privilege.

They don’t teach this in medical school – I’ll leave you to consider why!  So these ideas are relatively new to me and, as I learn about the unearned privileges I receive, I may be prone to misunderstandings and understatement. That’s because, as much as I try, it’s hard for me to see the world without my privilege.

Let’s think back to that time I was caught speeding. Though I was upset at the time, I never feared for my safety from the police officer, and assumed I’d be treated fairly. I never thought I’d be imprisoned for a minor traffic offence. I wasn’t asked to open the boot, or have the car searched – there was no reason to – but sometimes there is no reason to, and it still happens.

What if the police officer had looked in my car? What would she have found?

Wrapped up in a parcel on the back seat was my belief that if I was unhappy about how I was treated, I’d be able to see a superior police officer, whose background was also similar to mine. Tucked away in a plastic bag was my knowledge that I’d be able to get a lawyer and be seen by a judge who would also be a bit like me.

Aside from this, I’d know that hidden away with the spare tyre, there weren’t media stories about people like me that drew on my appearance or race to make me seem scarier or more violent than I am.

And tucked in the glovebox is my CV, which, because it has an English-sounding name at the head, is more likely to land me a job interview.*

I can go on. The car is full-to-overflowing of my white privilege. Behind the seat is knowing that politicians making the laws mostly have my racial background. I can glance in my rear-view mirror to see that my cultural background is shared by most journalists choosing what is news and how those news stories will be framed.  I can also recognise myself in those teachers at school and at uni who were encouraging me and helping to set my course.

It’s not just this one interaction with the police where my white privilege might be exposed, either. If the police officer wanted to search my home – more likely to be rented from someone else if I were Aboriginal – they’d find white people like me in my television dramas, more comfortable about sitting next to me, or allowing me to shop without suspicion.

Everywhere I look, in fact, is the message “Yes, you fit in here. You belong.” It’s nice and comforting. For me, and for other white people like me, life is like playing the computer game on the easiest setting.

To say this in public though, can lead to abuse and anger – so called white fragility, a state in which even a minimum amount of racial stress becomes intolerable, triggering defensive reactions among white people, such as anger, fear, and guilt.

I’m not saying that white people have it easy, or have no problems, or never go to jail. I’m not saying all white people are racist (though some honesty like this from Daniel Reeders would go a very long way to improving the situation).

We are (thankfully) not all Bolt wannabees. It’s much more subtle, complex and interesting than that. The structures that we have built society on, and colonised Australia with, have resulted in a whole heap of unspoken advantages to people like me, at the expense of people like my Aboriginal patients.

It’s why they relax in the community controlled service I work in –  because it says, unlike so much of mainstream Australia’s institutions and systems,“Yes, you fit in here. You belong.”

There is a common enough understanding that racsim is A Bad Thing, so even those who boo Adam Goodes don’t like being called racist. We now need to see and acknowledge the racist structures that we all live in, that exist in out health systems, in our legal systems and across our whole society.

Those imprisonment rates, those health statistics we see are symptoms of those societal structures. That is why we see similar figures right across the world.

Those statistics are the result of white peoples’ privilege and how white systems disadvantage and exclude others. It’s repeated for Maori people in New Zealand, for the Aboriginal people of Canada, and for black people in the US, which should tell us we’re not dealing with an Aboriginal and Torres Strait Islander problem here.

We are seeing the application of a dominant culture to exclude others.

We have to acknowledge this – which means those of us who benefit from white privilege need to do the most to change unfair systems – and perhaps risk losing some of our advantages in the process.

Those advantages can be hard to see. To help bring them to the surface, watch this video that tests your awareness.

Once you start seeing white privilege, like the surprise in this video, you notice it every time you look. 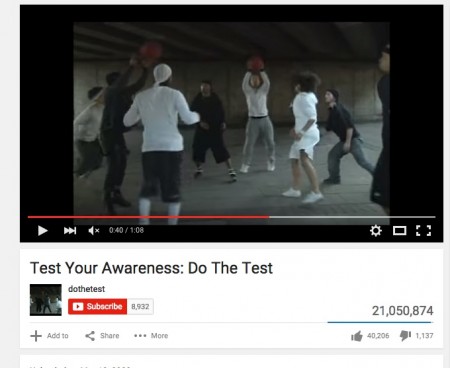 *Yes, one of the authors of that study is now in the Shadow Cabinet!

• Dr Tim Senior is a GP who works in Aboriginal health, a contributing columnist to Croakey, and author of #WonkyHealth – the e-book. Follow him on Twitter: @timsenior 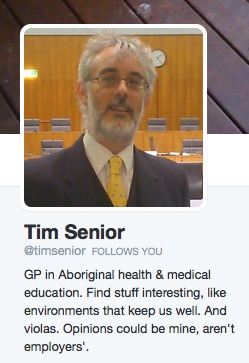