Why aren’t more academics making their own apps and getting digitally savvy?

In recent months, sociologist Deborah Lupton has become a blogger, joined Twitter, and made a free app to share the word about key concepts in medical sociology.

In the article below, she challenges other academics to think about how they could be making apps to help students.

Meanwhile, please speak up if you can recommend apps explaining important public health concepts in ways that might be useful for Croakey readers (and their friends) …

Apps and academics: why I made my own medical sociology app

A few months ago, I decided I would take on a new professional challenge – I would explore the world of social media and digital devices. 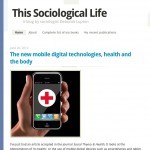 I hit the internet running and investigated the various forms of social media platforms available. I started up my own blog ‘This Sociological Life’, signed up to Twitter (@DALupton) and explored the possibilities of Pinterest for academics (and blogged about this here).

I also used SlideShare to upload some of my Powerpoint presentations and Delicious.com as a bookmarking site for material I had come across on my internet travels.

And I decided to try to make my own app for mobile digital devices.

My decision to make an app stemmed from two major reasons. First, I have long been interested in the ways people interact with computer technologies, and have published some research on this in the past.

Second, we have mobile digital devices at home that are very popular with my two school-aged daughters. I had noticed the huge number of educational apps that are available for children’s use, from infancy to high-school level. Some Australian high schools, including my older daughter’s school, have acknowledged young people’s high take-up of mobile digital devices and are beginning to advocate that students bring their devices to school and use them for educational purposes during the school day.

The relevance for tertiary-level education appeared obvious. I wondered whether many universities, academic publishers or academics themselves had begun to develop apps. Yet, having searched both the Android and the Apple App Stores using the search term of my discipline, ‘sociology’, I discovered only a handful of apps related to this subject for tertiary students. Nor were there many for other social sciences. There seemed to be a wide-open gap in the market.

So, as a bit of an experiment, I set about making my own app. I wanted to see how difficult it would be for someone like me who is not very computer-savvy. I decided to make an app which explained key concepts in medical sociology, a field I have been writing about for many years. The idea would be for the app to list each key concept and a brief explanation of it as a resource for students studying this topic.

After some investigation I found an online app maker wizard that was very easy to use. It basically involves using the program’s templates to type in the information you want to include.

My app is very simple. It is text-based only and has no illustrations or graphics, but there is provision for these to be included if the developer so chooses. Apps developed using this particular wizard are only be available for use on Android devices, but having looked at similar app makers for Apple devices I was put off by their more technical nature and the greater expense involved.

In just a couple of hours my app was ready. I had typed in over 25 medical sociology key concepts (for example, social class, discourse, identity, illness narratives, poststructuralism), plus a list of books for further reading, chosen a nice-looking background and paid US$79.00 for the app to appear without ads and to guarantee that it would be submitted to the Android App Store. 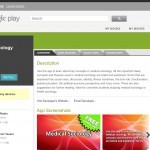 A day later I received a message notifying me that the app had been accepted into the App Store and was now ready for anyone to download (see it here). It was all very quick and easy. I was now an app developer!

The potential for using apps for tertiary education is enormous. Academics or universities developing their own apps are able to tailor the content to their own specific needs and purposes.

Some universities, including those in Australia, have begun to provide apps that provide information about the university (although some of these are little more than brochures uploaded to an app format).

Yet it seems that very few have developed more specific subject-based content for apps. It would be so easy for university students to carry apps on their mobile devices that provided information such as subject outlines, for example.

Short apps listing and defining key concepts on a specific topic area such as the one I have developed could be made for any number of subjects, available for ready consultation by students.

Over to you, academics …