“Why aren’t you all caring for country?” Professor Kerry Arabena

Leading Indigenous academic Professor Kerry Arabena warned she was going to be provocative in her keynote presentation at this week’s Public Health Association of Australia (PHAA) conference.

In many ways, she turned the discussion on its head, calling for a “shift from problem-solving to hope-building infrastructure”, particularly in remote Indigenous communities, and for debates around urban design to contemplate the land outside cities.

“Why is care for country just a concern for Aboriginal and Torres Strait Islanders and regeneration farmers?” Professor Arabena asked. “Why aren’t you all caring for country?”

One of the aims of the conference was to broaden the concept of social determinants of health to include psychological and emotional as well as social and physical determinants.

Conference participants repeatedly heard that many of these issues are meeting on the edges of Australian cities, in suburbs where people are increasingly stranded – physically and psychologically – and in the divide between cities and country.

The Cullacabardee Aboriginal community is 21 kilometres north of the Perth CBD, with a transient population of about 60-70. Few of its residents have cars or drivers’ licences, many are old and struggle to walk much of a distance. The nearest shop or bus stop is six kilometres away.

“They pay for taxis before they can pay for food,” said Asta Flugge from the WA Department of Health, which was asked by the community to help them deal with issues of healthy eating, including access and availability of food – on the outskirts of one of the world’s richest cities.

The Moorditj Lifestyles healthy food program was one of a series of presentations at the PHAA conference that illustrated the health concerns associated with living in Australia’s urban fringes.

The program has been deemed a success, particularly in the way it connected with the community, as this feedback demonstrated (Click on image for details): 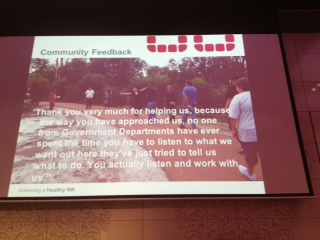 But, the organisers noted, there’s still no public transport serving this community.

In a keynote on tackling the physical and psychological determinants of health, Sharon Friel, Professor of Health Equity at the Australian National University, said good physical structures and social conditions of ‘place’ can contribute to individual and community empowerment that is fundamental to health equity and an enjoyable life.

“It is impossible to think about the physical environment and social conditions (and increasingly changing environmental conditions) separately, as they interact to improve or worsen health inequities,” she said.

“For example, poorly planned cities and their suburbs and inefficient public transit and road systems can result in long and expensive commutes for low-income workers that fray family and community ties, reduce the opportunity for social gatherings and for leisure and recreation, create conditions that make crime and violence – and the accompanying fear – more likely, or reduce access to basic amenities and services.”

That extends through to access to fresh and affordable fruit and vegetables, as she showed in this slide, which explained the strong focus on food insecurity at Aboriginal health sessions at the conference, including the Marang Dhali Eating Well program in western New South Wales and healthy food initiatives from the Victorian Aboriginal Community Controlled Health Organisation (VACCHO). 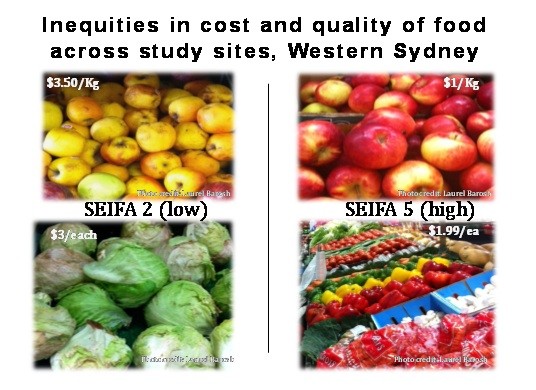 Design is also an important element, according to a Deakin University study on the perspectives of parents living in two new outer Melbourne housing estates.

In the study, parents talked about why they had wanted to move to the suburbs, nominating open public spaces and the chance to mix with neighbours as attractions.

But it found that lack of local services meant most people went everywhere in their cars and the design of houses meant they exited directly from garages into their houses. There was no ‘over the fence’ interaction. Similarly, few actually used local parks, with their children mainly playing in their own backyards.

For many others, there is no choice but to move to these suburbs as housing affordability worsens. The recent State of Australian Cities report catalogued the growing divide in cities like Melbourne which win international awards for liveability, but where low income households are forced by housing costs to live far from work and education opportunities, and with few support services and little public transport.

Speaking to the concept of social determinants of health as ‘a fair go’ in health, Professor Billie Giles-Corti, who is working on how to measure liveability across cities, asked: “Is it fair that we send people who don’t have as much money to live on the fringe where there’s no amenity – and they may live there for decades without amenity.”

It’s a dilemma that may also challenge health professionals living in inner and middle suburbs if they share the fear of change that many Australians have about the need to increase density to bring vulnerable people closer to services, jobs and opportunity. “We have to engage ourselves (on this),” she said. “We might be among those people bearing a placard declaring ‘save our suburbs’.”

Finding the way ahead, she says, will require bipartisanship and the development of city plans – as has happened in Portland, Oregan – not government plans that are subject to political shifts. It will also require new ‘knowledge brokers’ who can move into the gap between research and policy and practice, and be funded to do so, she said, quoting US epidemiologist Larry Green: “If we want evidence-based practice, we need practice-based evidence.”

It’s a gap that was also highlighted in a presentation by Patrick Harris, from the Centre for Health Equity Training, Research and Evaluation in Sydney. His team looked at how public health could collaborate with the housing and planning sector to improve health outcomes in new developments.

“Concerning master planning,” he reported bravely, “we did not know what we were doing. Despite our technical knowledge and skills with health-focused processes, we failed to appreciate complexities inherent in master planning which limited our ability to provide information at right points.”

In another presentation, about seeking to influence the New South Wales Planning Review to incorporate a health focus, he said health was mentioned “but not with any enthusiasm”, as a possible goal of land use planning in an early issues paper.

Public health advocates, he said, had to be able to recognise policy windows and to act quickly before they closed. He suggested five enabling factors:

“Additionally,” he said, “advocates must engage with the political processes, not rely solely on evidence and rational argument.”

Infrastructure for hope, not problems

Professor Kerry Arabena, Chair of Indigenous Health at the Centre for Health and Society at the University of Melbourne, was initially taken aback when asked whether she wanted to respond to a question about the design of city fringes in Australia.

“I’m very interested by the kinds of discussions that happen around how we might design communities, but I wish we would get outback to regional and remote Australia.

For example, people living in remote areas would “love to have safe walking paths well-lit at night because it’s too bloody hot to walk around during the day, we’d love to have a whole range of things that I think people in cities and on the coast take for granted.”

However, there was another dimension to consider around urban design: the land that sits outside cityscapes, and that resources our cities. Arabena added:

“I think there is an incredible invisibility around what is nominally called the outback or the bush that is not brought into these discussions in a real way, when a lot of the food production doesn’t happen in cities, it happens external to them, but the quality and health of those landscapes absolutely determines the quality of product that gets into your neighbourhood shops.

There needs to be some way (in discussions around urban environments) of connecting some of these big trajectories, not only about how we live but how we supply where we live.

Why is care for country just a concern for Aboriginal and Torres Strait Islanders and regeneration farmers? Why aren’t you all caring for country? We need to place country firmly in the health and well-being of our people and build the reconciliation agenda not just between people but between people and living systems.” 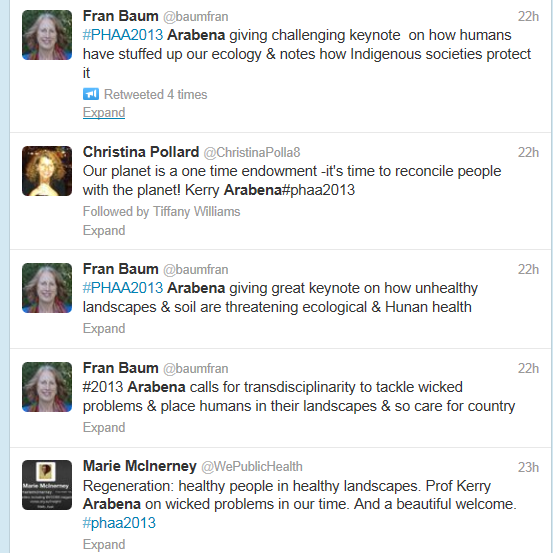