Why history lessons are an important part of medical education 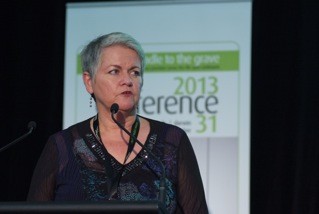 When academics at Bond University were planning a cultural immersion program aimed at improving medical students’ understanding of Indigenous health, their priority was to make it creative and engaging.

Associate Professor Janie Smith, who has previously worked as a remote health professional in the NT, presented on the new immersion program at the recent CRANAplus conference in Darwin (where she was also elected the organisation’s new president).

During a two-day retreat in the Gold Coast hinterland, students were asked to draw their own culture on large sheets of paper, to identify their own values and belief systems, as well as the symbols, food and other elements making up their culture.

In a later session, parts of their culture were – literally – ripped away from them, as a metaphor for how Aboriginal and Torres Strait Islander people have experienced the loss of cultural and family connections over time.

“We asked them, how does it feel to have part of your culture ripped away?” Professor Smith said.

She said the experience was extremely powerful for the students, as were the storytelling sessions where Aboriginal and Torres Strait Islander facilitators shared their own personal and family histories.

Students also participated in a weaving workshop, to gain an insight into Torres Strait Islander communal learning practices, and a talking circle, during which they shared their reflections about the program.

The pilot program with 92 first-year medical students was held last October, and Professor Smith and colleagues are gearing up for the next program later this month.

Professor Smith said an evaluation had shown the program was effective at engaging and educating the students.

“We didn’t want to get up and talk about racism in the early stages of the program and make people feel guilty, we wanted them to be open to learn,” she said.

“I think the approach we’re using is quite fresh. It deals with the difficult issues but in a positive way and it makes students work through the issues themselves.”

Given the diverse cultural backgrounds of the students, many would have experienced racism themselves, she added.

Professor Smith said the program highlight a lack of knowledge about Australian history related to the treatment and experiences of Aboriginal and Torres Strait Islander people, and she plans to increase the history component for medical students. Some students hadn’t known where the Torres Strait Islands were located, she added.

• This is the final article from the CRANAplus conference – you can see the other stories here.