Why I will celebrate NAIDOC Week next year: Dr Chelsea Bond

The Guardian recently published an article by Nakkiah Lui, a Gamillaroi and Torres Strait Islander woman and writer, titled “Why this year’s NAIDOC week will be my last”.

In response, Dr Chelsea Bond, an Aboriginal (Munanjahli) and South Sea Islander Australian and a senior lecturer with the Aboriginal and Torres Strait Islander Studies Unit at the University of Queensland, explains why she will continue to celebrate NAIDOC Week – as an act of agency.

As the nation wrapped up its annual NAIDOC Week festivities last week, Nakkiah Lui provided a timely and pertinent reminder of the origins of NAIDOC Week and encouraged us to critically reflect upon exactly what we were celebrating about Aboriginal and Torres Strait Islander culture in the first week of July.

I must confess, I’ve been unimpressed by the various government departments who grace our local festivities distributing plastic merchandise with a missionary zeal handing out trinkets to the ‘natives’.

As a colonized people, we must continually interrogate the acts of the colonizer, as well as our participation in such acts. We must disrupt colonial imaginings of us and our culture, while also being mindful of the ways in which we’ve internalized those imaginings and reproduced them as our own.

While I applaud Lui’s reflections on one level, I am disturbed by the contradictions of this critique.

In a culture steeped in oral tradition, there is perhaps no other important cultural act than the act of storytelling. As a young child I was conscious of all manner of rules about the stories I could hear and the stories I could tell. When invited to speak, I’m forever mindful of the protocols regarding what I’m speaking about and of course, who I’m purporting to speak for – there are always limitations upon the narrator which we can count on our mob to remind us of. 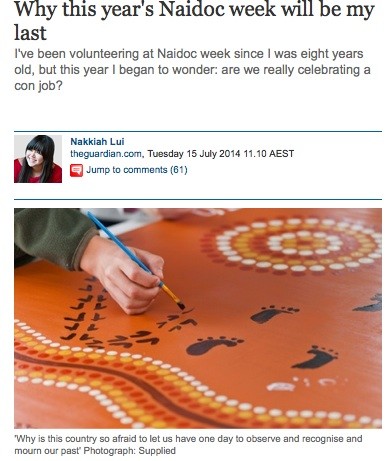 Thus Lui’s proclamation in The Guardian (which boasts a readership of 1.2 million Australians) that in NAIDOC Week “everyone had a wonderful week of both…sausage sizzles and eye incest from accidently perving on an unknown cousin” initially inspired a gut reaction from me best encapsulated as the ‘lateral violence’ type. But to engage in a response of this nature would do a disservice to the both of us and our respective communities.

Upon deeper reflection, what was problematic about this commentary for me was that it spoke to the author’s experience of NAIDOC Week but was narrated as the experience of “everyone” including me. In a climate where Indigenous voices are still at the margins of mainstream media attention, what we say carries an extra burden of representation that we need to be conscious of and cautious about.

Given that Lui’s cultural celebrations have been reduced to sausage sizzles, face painting, perving and activities constrained by the parameters of federal funding guidelines, I can well imagine there might be little to celebrate.

However, what I saw during NAIDOC Week was the ongoing agency and activism of our mob through activities that were not necessarily sanctioned by the State. It was unfortunate that the analysis of funding guidelines distracted the author from exploring and promoting the various and vibrant ways in which our people continue to commemorate the week.

That NAIDOC Week should have multiple meanings for our mob, complimentary and contradictory is a story I feel would’ve done more justice to our people.

Reminiscing about Indigenous activism of the past, while failing to acknowledge how it operates today was a disappointing oversight and in part, inspired some of the responses it did.

A healthy sense of culture

When I celebrate NAIDOC Week – I’m not participating in my own oppression. Quite the opposite. As an Aboriginal mother I’m engaged in the task of racial socialization – raising Aboriginal children with a healthy sense of culture and identity in a world in which that Aboriginality has negative connotations.

NAIDOC Week for me, makes that task just a little easier. This doesn’t mean I don’t resist my own oppression, but abstaining from celebrating culture will not free me or anyone else I know from it. In fact if offers some reprieve, at least for one week.

Our Aboriginalities have been pathologised by the State and is evidenced in an array of Indigenous social policy agendas from the Northern Territory Emergency Response to the various Close the Gap initiatives that are visited upon us every day.

Pervasive colonial narratives of our culture as lost, less or even worse, the cause of our social ills, is something that I feel compelled to contest. And I do that, even when I’m organizing a NAIDOC Week activity in my own community of Inala, or taking my kids to a Family Fun Day, or marching on Invasion Day.

As part of this year’s NAIDOC Week event in Brisbane’s Musgrave Park, I convened a forum which explored the various ways in which Indigenous activism is present by yarning with an activist, academic, athlete and a returned serviceman. This reminded us that every day as Indigenous peoples, we are engaged in acts of resistance and resilience in all kinds of places and in all kinds of ways – “passivity” is simply not an option.

Many of us are enacting our own agency as sovereign people, and yes, even through the task of ‘celebrating culture’ in NAIDOC Week.  I celebrate because despite all intensive efforts to eradicate us from the Australian landscape, ngulli yahnbai gulli bahn (in my language Yugambeh, “we are still here”).

Despite our hardships, despite our trauma, despite our oppression – we are still here and so too is our ‘culture’. And that ‘culture’ is still operating inside and outside of that tent that is erected at 5am in the morning each year.

Whether that happens to make some non-Indigenous people feel warm and fuzzy is not my concern. What is my concern is that we proclaim what culture means to us, each and every day, and in ways that honour those that have gone before us and those walking beside us, even if it differs from our own idealized notions of culture.

Perhaps having one week in the calendar year where we do precisely that is not a “con” as the author suggests. Rather it is our duty as tomorrow’s ancestors. This is the cultural story that I choose to narrate, and this is the gift that I leave to my descendants.

And should NAIDOC Week only offer you the opportunity to discern who your mob is – then perhaps that would be reason enough to turn up for your sausage next year.

• Dr Chelsea Bond is an Aboriginal (Munanjahli) and South Sea Islander Australian and a senior lecturer with the Aboriginal and Torres Strait Islander Studies Unit at the University of Queensland. She has extensive experience in Indigenous health, as a health worker and researcher in urban and rural communities across south-east Queensland.