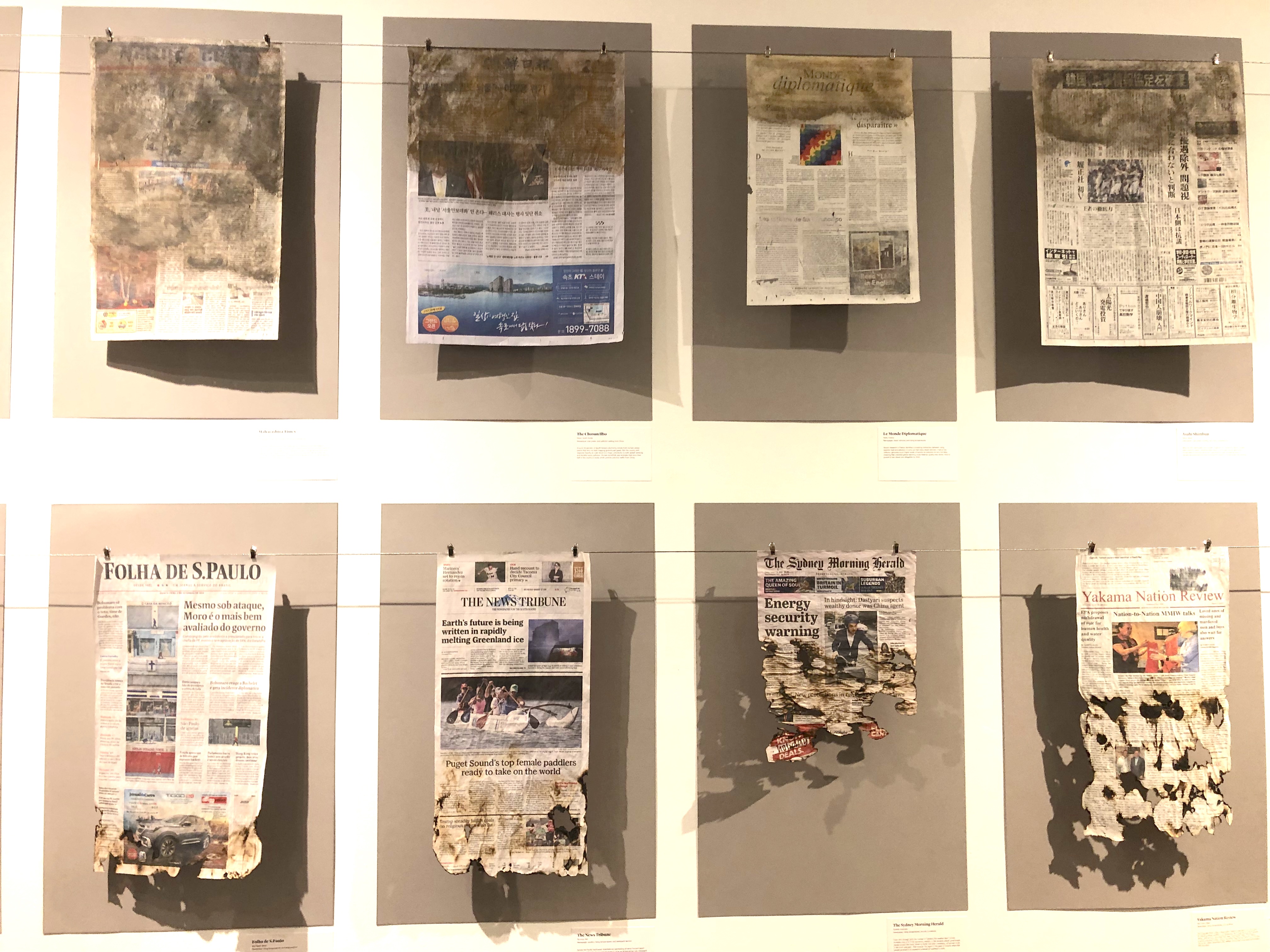 Introduction by Croakey: When the Intergovernmental Panel on Climate Change released a critical report on the climate crisis, 28 of the 50 biggest newspapers in the US did not tell their readers about it.

In the United States last year, the top news shows on ABC, NBC and CBS spent a combined total of only 142 minutes reporting on the climate crisis – less than in 2017.

These figures were cited at the launch of Covering Climate Now, an ambitious global media collaboration that seeks to transform media coverage of this global public health emergency.

Greg Truman reports from the launch art exhibition in New York City, Flood the News, featuring the damaged front pages of newspapers. This article is published as part of Croakey’s contribution to the global #CoveringClimateNow project.

In a diner in rural Alabama a waitress shook her head slowly after the foreign visitor—one of only two customers in the eatery at the time—asked if she’d mind changing the channel on the television from Fox News.

It wasn’t clear if she had no other television options to explore or it was greasy spoon policy to show the Murdoch-owned cable network exclusively.

Either way, in the South and parts of the Heartland of the United States, media options are not always abundant. In the land of “300 channels and there’s nothing on,” a surprising number of Americans get their television news and entertainment from just a few outlets—Fox, chief among them.

Contributing to an increasing lack of news diversity, most every town in America has lost a local newspaper or two in the last decade. Outside the cities, sometimes it feels the only choices are ever-barking, uber conservatives like Rush Limbaugh on the radio or the information echo chambers of the Internet.

Many of these regions with limited choice are red states—staunchly Republican and, in recent years, rabidly Trumpist. There, amid the tumbledown facades of formerly quaint rural and one-industry towns, a generous supply of well-crafted stories about subjects such as climate change—which the current U.S. President has dubbed a hoax—don’t seem to be of high editorial priority.

“We tried to get News Corp on board, but they wouldn’t,” lamented Kyle Pope, the Columbia Journalism Review editor and publisher who is at the helm of Covering Climate Now (CCN), a week-long campaign involving more than 250 news organizations around the globe.

The aim, supported in Australia by Croakey News and a handful of other outlets, is to “flood the news” with climate coverage in the rundown to the United Nations Climate Action Summit on September 23 in New York.

Speaking to Croakey at the launch of the initiative at a Manhattan art gallery, Pope noted his CJR team and campaign co-founders The Nation had some success bringing a few “centrist” media bodies including Bloomberg News into the fold. The Guardian is also a partner of the project, but most of the largest outlets around the world and all right-leaning media groups avoided joining what the organisers have dubbed the biggest effort undertaken to rally the media around one topic.

Indeed, the organisers estimate the potential audience of participating outlets is around one billion, but Pope acknowledges it would have been positive to deliver the defining story of the era, climate change, into the homes, diners and inboxes of those who have suffered from a dearth of credible coverage.

“We do need to start really spreading the word that we have to see climate change as non-political,” Pope said. “That writing about how hurricanes are increasing in intensity is not a political act, it’s just journalism.”

Pope and The Nation’s long-time environment correspondent Mark Hertsgaard hatched the concept of Covering Climate Now as they fretted that the level of coverage in the US and around the world wasn’t commensurate with the importance of the story.

Even when arguably the most important global issue gets attention on broadcast television, CCN cites the Washington Post as reporting that between 2009 and 2018, it was discussed in relation to politics 87 percent of the time.

De-politicising coverage and focusing on objective facts and scientific rigor is a tall order, but Pope is upbeat about discernable shifts going on in the perception of climate change in the US.

“It’s to the point of being undeniable,” he said. “Many people regardless of politics are speaking out. Look at farmers (often Republican voters). Farmers will tell you there is no doubt about climate change.”

The Guardian has reported that recent polls showed more than two-thirds of Americans view climate change as either a crisis or serious problem. And more Republicans than ever, especially among young people, are speaking out about their climate concerns.

Pope said that while deniability was being eroded, some, including several public figures he observed during a recent visit to Australia, were shifting tactics to say taking action on climate change “is too expensive, or it’s too far down the road and there’s nothing we can do about it, so let’s just forget it”.

Pope and The Nation’s Hertsgaard said journalists needed to be vigilant as outright denial turns to deflection. The profession already had much to answer for after years of confusion over how to cover the issue.

“At worst, we reported the story wrong for 20 years,” Hertsgaard said. “We pretended there was this balance between real science and (the comments of) paid propagandaists.”

Now, however, there is a growing understanding of the need for assertive coverage that doesn’t open the door to speculation about the existence of a climate change as a global threat. To make up for past mistakes and do justice to the issue, the Covering Climate Now initiative is urging outlets to make it clear that the climate story is the “overriding story of everything” and to “use pointed language that conveys urgency”.

“We look back at the way journalists covered the Civil Rights era and we see it as a golden era of journalism,” Pope said. “Journalists took something that was wrong and aggressively covered it, resulting in a change of laws–same as Vietnam, same as Watergate. And that’s where we’ve got to go. We need to turn the light on to provide the information that is needed.”

The one-week campaign is part of a larger, ongoing push to support media outlets big and small in constructing a coverage model.

“Sometimes it’s as simple as not knowing where to start,” Pope said. “Where do they get story ideas from; what do they look at. We can help by providing models, maybe using a similar system to say a paper of the same size.”

The launch in New York featured an exhibition that used about 40 mounted newspaper front pages from around the world, including The Australian and the Sydney Morning Herald—neither participants in Covering Climate Now.

The pages were treated to look as if they’d been impacted by flood or fire and each exhibit included a note referencing climate challenges in the country from where the newspaper came.

The climate notes for Australia referenced the introduction of purple coloring to weather maps in the country to mark blistering heat in recent years, and a leap in the number of extreme fire weather days. 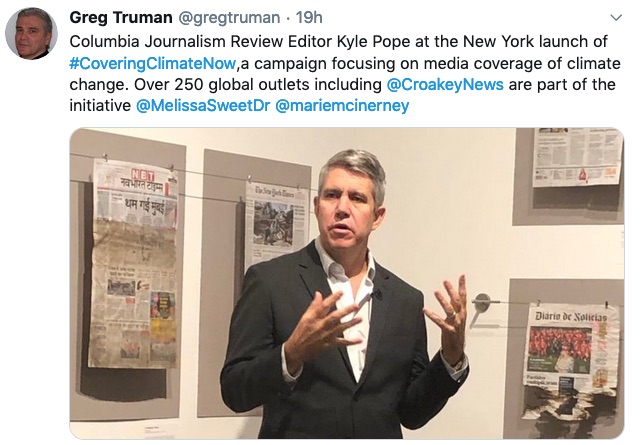 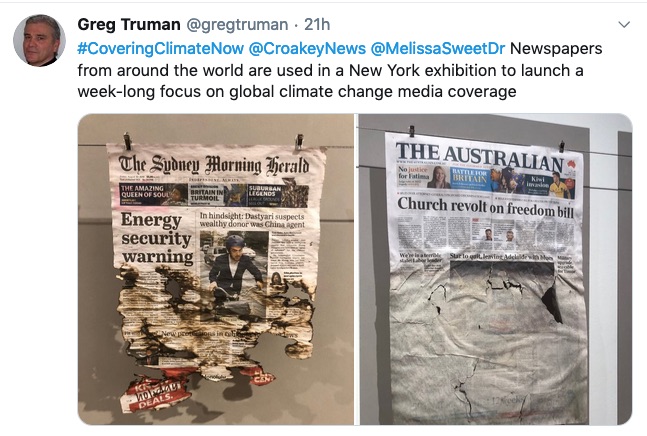 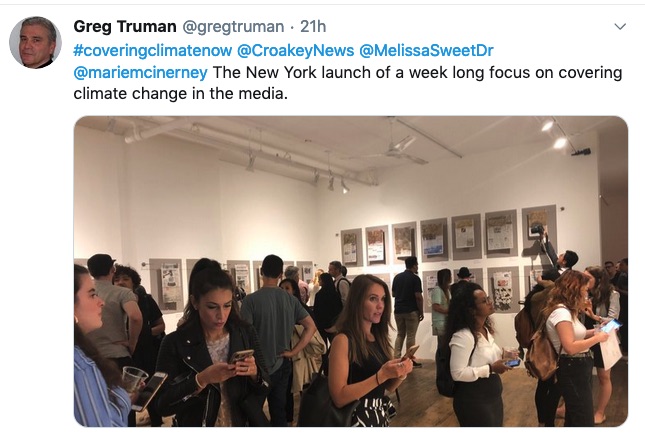 • Greg Truman is a New York-based Australian journalist and author. His last book was Bending Towards Justice with Alabama Senator Doug Jones.

Throwing a billion news consumers behind coverage of the climate crisis

• This article is published as part of the Covering Climate Now initiative, an unprecedented collaboration involving more than 250 media outlets around the world that is putting the spotlight on the climate crisis in the leadup to a Climate Action Summit at the United Nations General Assembly in New York on 23 September. It is co-founded by The Nation and the Columbia Journalism Review (CJR), in partnership with The Guardian. Croakey invites our readers, contributors and social media followers to engage with these critical discussions, using the hashtag #CoveringClimateNow. See Croakey’s archive of climate and health coverage.