Why prevention, equity & primary health care should be at the heart of 2016 Federal Election

Today’s release of the Australian Burden of Disease Study provides a valuable backdrop for the first week of the 2016 federal election campaign, showing why prevention and primary health care must be high on the agenda.

The Australian Institute of Health and Welfare report, Australian Burden of Disease Study: Impact and causes of illness and death in Australia 2011,  found there has been a 10 per cent fall in the overall burden of disease and injury between 2003 and 2011. The largest fall in the fatal burden was seen in cardiovascular diseases, where rates fell by nearly one-third.

However, chronic diseases such as cancer, cardiovascular diseases, mental and substance use disorders, and musculoskeletal conditions still dominate – accounting for around two-thirds of the total disease burden (69 per cent in males and 62 per cent in female).

Importantly, the report points to the unequal burden experienced by many groups – notably lower socio economic groups and those living in remote areas (particularly in the Northern Territory) – and the critical need for investment in prevention and primary health care.

‘Similarly, a 4% reduction could be achieved if all remoteness areas experienced the same burden as the major cities.’

Download the report: Australian Burden of Disease Study-impact and causes of illness and death in Australia 2011

See at the bottom of the post for related graphics and tweets.

Reactions to the report

The Public Health Association of Australia (PHAA) said in a statement that the Burden of Disease report highlights the importance of prevention.

“Tobacco use was responsible for 9 per cent of the total burden of disease and injury making it the most burdensome risk factor. While PHAA applauds the Government for increasing the excise on tobacco, an overall approach needs to be considered when looking at prevention. There’s still a long way to go.”

“The report shows alcohol use was responsible for 5.1 per cent and physical inactivity accounted for 5 per cent of the total burden of disease and injury. Alcohol use and physical activity leads to chronic conditions including heart disease and type II diabetes. A sugar tax on soft drinks is one way to prevent the rising burden of disease especially chronic diseases. There is no nutritional value in soft drinks. By implementing a tax and educating the public on the harms soft drink has on a person’s overall health, we can become a healthier nation.

“The burden of chronic diseases is putting pressure on our hospitals making it difficult for families to receive the care they need. The report particularly shows the inequities for those in lower socioeconomic areas and regional areas. Large inequalities were also found across socioeconomic groups and remoteness areas. A 4% reduction could be achieved if all remoteness areas experienced the same level of burden as major cities.

“This report shows the Government needs to implement a comprehensive approach to target those who are being affected especially in rural and remote areas. We have a responsibility to ensure all Australians has access to healthcare services no matter their postcode.”

“Greater investment into prevention initiatives can save lives. Over one third of Australians don’t need to have the burden of disease. These statistics show a clear cause to effect and how it can be stopped – let’s start targeting the risks and begin saving lives.”

Opposition health spokeswoman Catherine King said the report was “another reminder of the senselessness of the Abbott-Turnbull Government’s cuts to preventive health”.

She said the 2014-15 Budget saw $368 million cut from preventive health and the abolition of the Australian National Preventive Health Agency. She said:

“Labor invested $872 million to help children, adults and communities stay healthy through its historic agreement with the states on preventive health. International evidence shows that investments like the National Partnership Agreement on Preventive Health make economic sense. The authoritative Trust for America’s Health has shown that every $1 spent on increasing physical activity, improving nutrition and reducing smoking lowers health care spending by $5.60 in the United States.”

A new preventive health alliance, Prevention First (involving the Foundation for Alcohol Research and Education(FARE), PHAA, Consumer Health Forum of Australia, and Alzheimer’s Australia), said the report had a very clear message for all political parties, not least the potential to “reduce the staggering 31 per cent of preventable chronic disease”.

“Governments have taken a strong position on tackling tobacco use across Australia by increasing taxation and putting controls on availability and promotion. On tobacco, Australia is a world leader but has, up until now, been reluctant to tackle alcohol use, physical inactivity and unhealthy diet, that contribute so significantly to this burden,” FARE Chief Executive Michael Thorn said.

Consumer Health Forum CEO Leanne Wells said Australia’s health system needs to focus more on ensuring wellness in the first 50 years of life rather than being an illness-system where expenditure is focused on the later years of life.

“Governments are constantly talking about the need to reduce our burgeoning health costs, yet the reality is we are underinvesting in the area of prevention.” Read the full statement.

Palliative Care Australia said the report highlighted the proportion of people living with chronic disease who were potentially missing out on palliative care support. Its statement said:

“Four out of five deaths in Austtralia are caused by chronic illness, but there is a misconception that only cancer patients can access palliative care. People with chronic illnesses often have more than one chronic illness which affects their health in different ways. 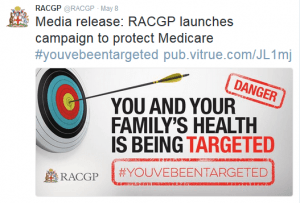 This week also sees the roll out of the first major health campaign for the election – the Royal Australian College of GPs’ #antifreeze #youvebeentargeted campaign against last week’s Federal Budget extention of the freeze on patient Medicare rebates to 2020, which has been dubbed “co-payment by stealth”. RACGP President Dr Frank Jones warned in this interview on Radio National Breakfast that the current concept of Medicare is being challenged, and not just by the Federal Coalition but by Labor too which first introduced the freeze.

It’s a debate on universal health care that doesn’t just lie with the health sector, but with the whole community, he said. On the extended rebate freeze, the RACGP says:

This attack on Medicare funding has the potential to lead to significantly worse health outcomes for Australians, because it means those who can least afford it will delay seeing their GP. The freeze threatens the viability and sustainability of quality general practice and is bad for the health of Australians.

Here too are media reports on the campaign:

The Australian Healthcare and Hospitals Association (AHHA) has called for all candidates in the 2016 federal election to commit to working together for a healthy Australia supported by the best possible health system. In a statement to mark the launch of the campaign, AHHA Chief Executive Alison Verhoeven said:

“A priority for the incoming 45th Commonwealth Parliament must be to ensure that our health system provides affordable, accessible quality care to all Australians, both now and into the future”

“The Commonwealth has a vital leadership role to play in supporting better integrated and coordinated patient-centred care across the primary, acute, aged and disability care sectors.”

Australia’s healthcare system consistently outperforms other OECD countries when comparing key health indicators and costs, but burdens such as an ageing population, increased rates of chronic and complex disease, and new medical technologies and treatments, are presenting new challenges and increasing the cost of care.

The AHHA calls on all candidates to commit to an innovative patient-centred health system founded in well-resourced prevention and primary care, and integrated effectively with the hospital sector, universal healthcare principles, and long-term sustainable funding.

“Maintaining the status quo and tinkering around the edges of system reform will not provide the future-proofed health system that Australians expect and deserve. Now is the time to rethink traditional approaches and bring our 20th century health system firmly into the 21st century.

The Australian College of Rural and Remote Medicine (ACRRM) is calling on all political parties to commit to training and workforce policies which will deliver the ‘right’ doctors to rural communities – doctors who have the necessary range of skills to meet the diverse and often complex health care needs of rural Australians. Its statement says:

There is a clear national imperative to do more to improve health outcomes for rural and remote Australians, including Aboriginal and Torres Strait Islander peoples. Compared to their urban counterparts, rural people access medical services less frequently and receive far less per capita Government health care funding. Their health outcomes are generally poorer.

1. Training and retaining rural doctors who have the skills necessary to meet the health care needs of their communities by supporting a national Rural Generalist Pathway, and providing rural prevocational exposure for junior doctors.

3. Improving infrastructure and maintaining life-saving services in rural hospitals and health care facilities by: providing adequate, targeted Federal Government funding support, and
improving coordination between the State and Federal jurisdictions and the public and private sectors.

From the Australian Burden of Disease Study 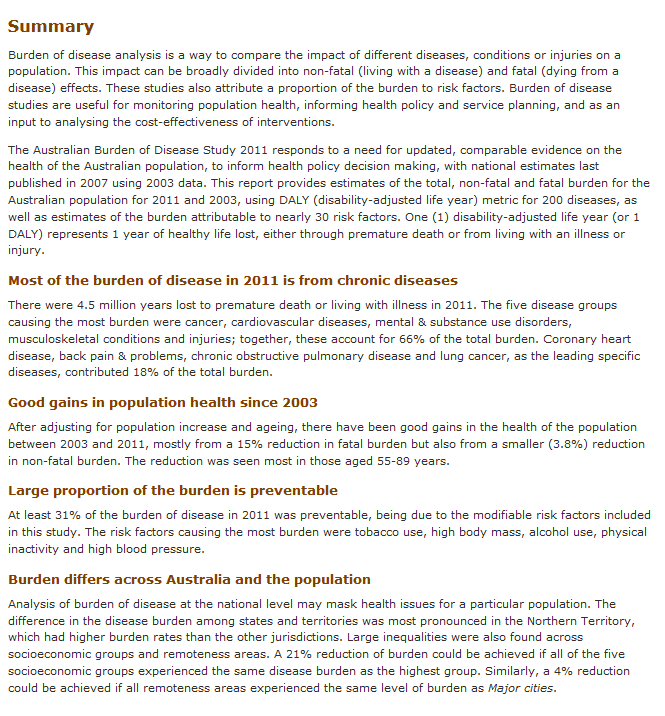 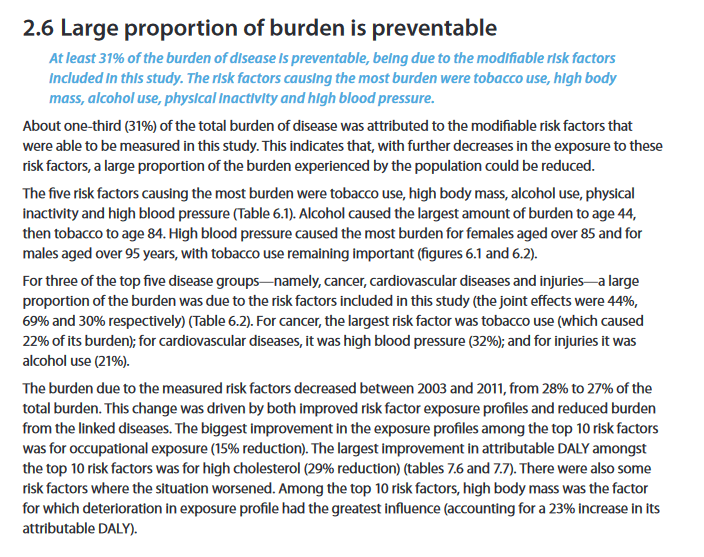 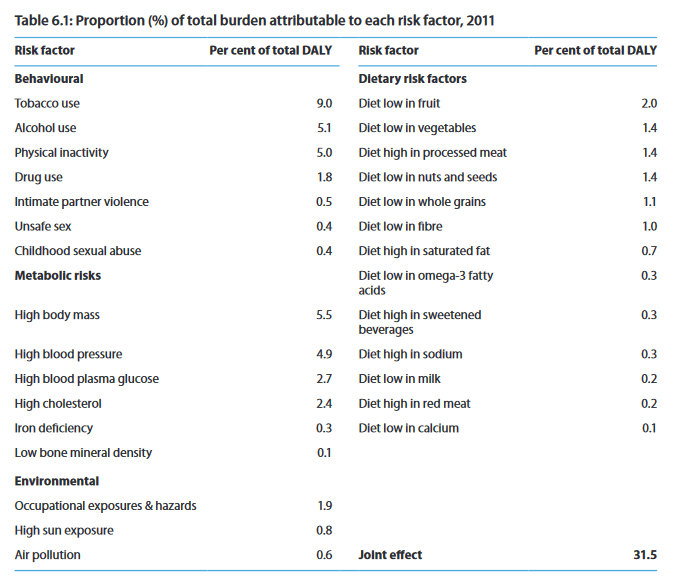 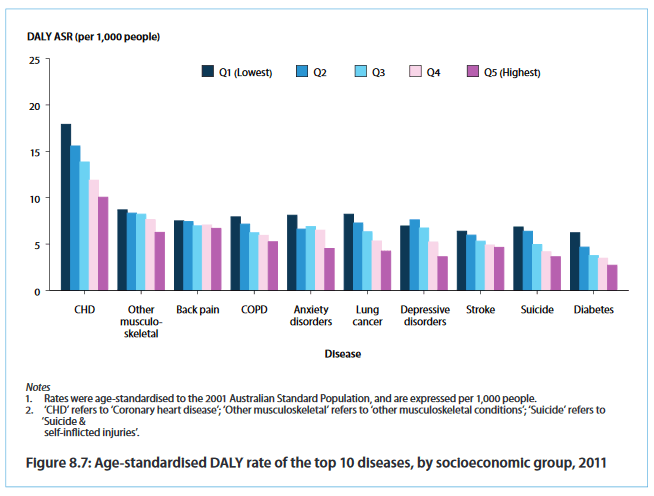 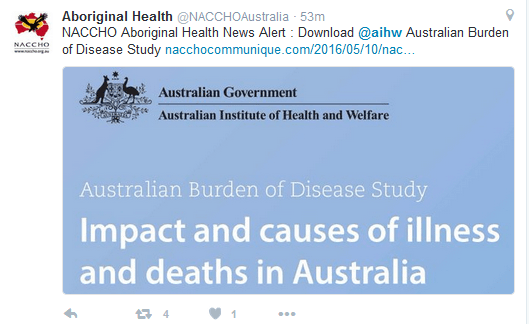 PrevPreviousAnnouncing the program for the Indigenous Health Twitter festival – IHMayDay16
NextWhen is it too early to link climate change & extreme events? Or too late? On Canada’s Fort McMurray fire & the need for a ‘social vaccine’Next