As highlighted by the Parliamentary Library, the introduction of private health insurance (PHI) into primary health care raises some significant policy and regulatory challenges.  In the following piece Dr Tim Senior expands on some of these issues and outlines implications of this move for population health, equity, health care costs and ultimately the future of our public health system.   This piece originally appeared in his blog The Influence of the Tricorder, and is reposted here in full, with permission. He writes:

As we play “will-they won’t-they” on the GP Copayment – currently rumoured to be dumped, but with the Medicare rebate frozen, that’s just a slow implementation of the co-payment. Health care costs keep rising, and presumably the government know this as they’ve just agreed to allow increases to Private Health Insurance premiums by an average of 6.2%. They rose by an average of 6.2% last year, too.

Of course, your tax subsidises this to the tune of over $6bn (yes, billion). Governments see Private Health Insurance (PHI) as being an important part of the health system mix in Australia. One of the budget KPIs is to maintain the number of people covered by private health insurance hospital cover. As well as rebates of 30% of the premium, the tax system penalises high income earners who don’t take out health insurance. And Peter Dutton, the former health minister, can even be seen spruiking health insurance.

What do the co-payment and Private Health Insurance mean for health policy?

Combining a liking for co-payments and PHI, this is my prediction for the worst case direction of future health policy under the current government:

A look at Private Health Insurance through a lens of who actually needs good health care the most shows why this progression needs to be resisted.

Who has Private Health Insurance?

Nationally, about 47% of Australians hold hospital insurance coverage. It has gone up slightly each year since 2010, and is fairly constant across the states (with more in the ACT and fewer in the NT).

Looking at insurance coverage by age, we see fewer being covered in their late 20s, and a big drop in coverage in the elderly.

Who doesn’t have Private Health Insurance?

It’s a statement of the obvious to say that those who don’t have health insurance are those who can’t afford the premiums. And that would certainly be true. 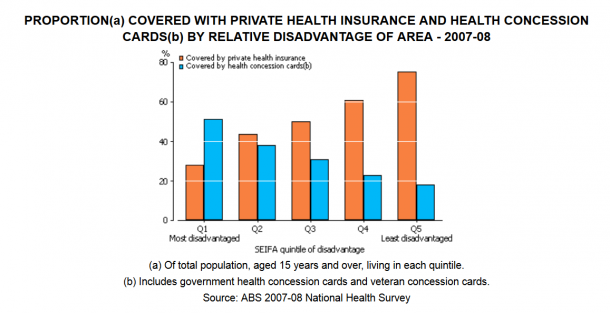 This is all very well, but it is a well know fact that the more disadavntged you are, then the more health problems you have. (I am writing another post all about this, but you can see the stats before I write).

The area in which this is most well known is in Aboriginal and Torres Strait Islander health, where the statistics are well known. Less well known is that only 15% of Aboriginal and Torres Strait Islander people in non-remote areas have Private Health Insurance. This is Australia’s specific example of the Inverse Care Law that applies generally. Those who need health care the most, get it the least.

Private Health contributes less than 8% of the total health spend (less than half the amount contributed by individuals themselves in out of pocket costs). 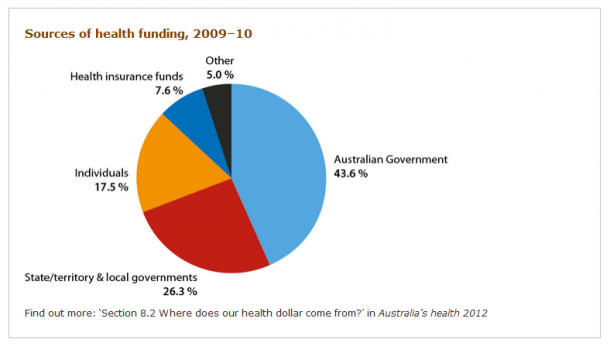 What does Health Insurance buy – “For our members”?

Private health insurance have a difficult time selling you something in a universal health system. If the health system is going to give you high quality, timely care when you need it regardless of your ability to pay, what can they offer? This, I suspect, is one reason why the government want to turn Medicare into a safety net, rather than a universal health system – to generate a product to sell for profit. Private health insurance need to be able to convince you you’re getting something you wouldn’t otherwise get. That’s why it’s always “For our members.” Here are the options:

Remember that having private health insurance doesn’t solve all your health care problems. Most policies are subject to exclusions – are you covered for having a baby? Mental illness? You are with Medicare! There are also significant patient copayments, which are often unclear when the policy is taken out or when you start treatment.

We’ve seen that Private Health Insurance is mostly bought by those who can afford it, who, by a happy coincidence are also those who are likely to be the healthiest. Clearly, there’s not too much profit to be made by paying out on insurance for people with more conditions, or needing more complex case management.

So when we pay over $6bn in tax rebates on private health insurance premiums, that’s money going from our tax to those who are already well off enough to afford PHI premiums. But not to those who have most illness or the most need of it. That money can’t help Close the Gap, for example, when it has no way of reaching the 85% of Aboriginal and Torres Strait Islander people in non-remote areas without Private Health Insurance.

And when we allow Private Health insurance premiums to rise by 6.2% each year, but freeze Medicare revenues, that’s paying more each year for the health care of those who need it least, while ensuring a cut in real terms for those who rely on Medicare, and ensuring they will have to contribute out of their own pockets. General Practices will gradually have to move away from communities that can’t pay to those that can.

When we allow Private Health to sell a product that allows us to jump a queue on the basis of our ability to pay, rather than our clinical need, then that moves those better off and less likely to have high health care needs to the front of the queue. This already happens in the hospital system, and will happen in General Practice if we allow it. Freezing Medicare rebates makes this more likely, as the only source of revenue to keep practices viable is patients.

And eventually, if Medicare is a safety net unused by those who are better off (where more political power lies) then it will be allowed to gradually wither as it serves only those without money, power or influence