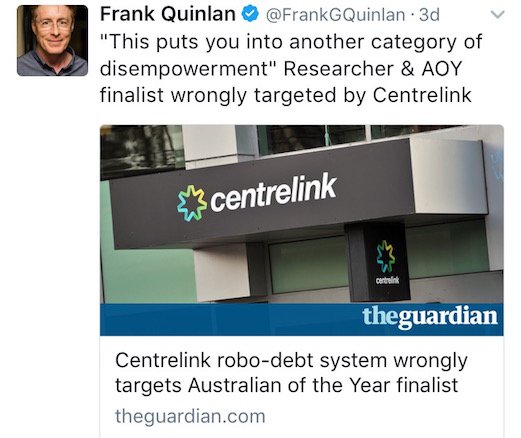 Why the Centrelink debt recovery programme is a health issue

Welfare and citizen groups have stepped up their opposition to the controversial Centrelink debt recovery programme, saying the minor changes announced earlier this week do not go far enough.

In a media statement, the Australian Council Of Social Services (ACOSS) said they had met with Human Services Minister Alan Tudge, and “again urged him to immediately halt Centrelink’s automated debt recovery program, which is operating as an aggressive abuse of government power, causing extensive stress, anxiety and harm amongst thousands of people caught up in the process.”

The statement came a day after after Tudge told the ABC that some changes would be made to the programme in response to the concerns that have been raised since late last year, about flawed data matching, poor communication, inaccurate debts and heavy handed treatment of clients.

The changes included allowing recipients of the notices be to request an internal review of their payments before debt proceedings were launched, Centrelink taking extra steps to make sure they held the correct address for each client to ensure due notice of the impending debt, the sending of debt letters by registered mail, possibly following up with a phone call.

He also said he had instructed instructed to Centrelink to use simpler, clearer language in the letters, and to add a contact number rather than only giving the recipients the option of going online.

During the week the Guardian Newspaper revealed that they had learned from two anonymous Centrelink sources that Centrelink staff were being actively discouraged by management from helping clients to identify errors in their debt notifications, and were told only to act on information that was raised or provided by clients; a claim that general manager of the department of human services, Hank Jongen, said was inaccurate.

Citizen’s organisation, GetUp, the Centrelink whistlebower’s initial point of contact for these revelations, has also launched a website to help people appeal their debt letters, and another community instigated website, #NotMyDebt, has collected more than 350 stories claiming erroneous debts totalling more than $2 million.

The posts on the site detail the anxiety associated with the prospect of a large, unexpected debt, and the time-consuming, stressful process involved in proving that the debt is not valid.

Stories of hardship from people with mental illness, chronic disease, or who are semi-retired have appeared elsewhere, and these are likely to become much more common if the programme continues using current “robo-debt” methodology: Centrelink is planning to extend the debt recovery programme later this year to include those on disability support and aged pensions.

Croakey did a quick whip around yesterday to see if any health organisations had joined the calls for reasonable treatment of welfare recipients by our government, and found little sign of engagement.

There could be many reasons for this, including that excellent advocacy is already occurring elsewhere; that the government has the right to address welfare fraud; that the number of people affected is unclear and information is anecdotal; or that organisations are reluctant to put their relationship with government at risk, for fear of jeopardising their other activities.

Another possibly is that we continue to underestimate the connection between disempowerment and poor health.

Only a few months ago we were reminded of this connection in Sir Michael Marmot’s excellent series of Boyer lectures. Marmot put it in a nutshell back in 2012, when he told ABC radio, “There’s good evidence that if people are disempowered – if they have little control over their lives, if they’re socially isolated or unable to participate fully in society – then there are biological effects”.

ACOSS, whose full statement appears below, is calling for an immediate end to the automated data matching program and for the convening of a roundtable of key stakeholders and experts in social security “to design a fair and humane approach to debt recovery”.

An ACOSS representative confirmed to Croakey that her organisation was not aware of any health organisations involved in advocacy for the many vulnerable Australians who have been adversely affected by the blunt instrument of Centrelink’s debt recovery programme, but that they would welcome such involvement.

It won’t be long before the effects of exacerbated financial stress, uncertainty and disempowerment are being felt in consulting rooms and hospitals across the country.

Do we have to wait until then for the health sector to get involved?

“ACOSS met with Minister Tudge yesterday and again urged him to immediately halt Centrelink’s automated debt recovery program, which is operating as an aggressive abuse of government power, causing extensive stress, anxiety and harm amongst thousands of people caught up in the process.

“We also repeated our call for the Minister to convene a roundtable of key stakeholders and experts as soon as possible to design a humane and fair approach to debt recovery.

“Further disturbing allegations have been released today detailing glaring mistakes generated by the automated system. ACOSS also calls for an independent investigation into these allegations.”

Key issues with the auto-debt recovery program include:

“There must be human involvement in the detection and calculation of debts. Without this step, many people will be paying back debts they do not owe, or paying a debt higher than what they owe.

“The Minister must listen to the individuals affected, the broader community and a wide range of stakeholders; and end the automated debt recovery program to prevent further harm,” said Dr Goldie.

PrevPreviousIncreasing Medicare rebates in the bush will not reduce patient out of pocket costs. Here’s why.
NextInnovations in evidence synthesis: the invisible healthcare revolutionNext