Why the NDIS is shifting the paradigm and the balance of power. By all reports, this was an excellent presentation

Marge Overs, a journalist who is covering the National Rural Health Conference for Croakey this week, says one of the outstanding presentations has been an explanation of the NDIS from Dougie Herd.

Mr Herd is from the NDIS Launch Transition Agency, where he is Branch Manager with responsibility for research and engagement in the national office. He was born in Glasgow and has been a wheelchair user for 29 years.

“With honesty, humour and a glorious Scottish accent, Dougie Herd described the vision behind the National Disability Insurance Scheme, which will be launched in just 11 weeks.

Given the audience’s clear love of Dougie’s speech, I can do no better than to leave the report in his own words. Here is a (slightly edited) extract from his presentation.”

How we’re launching the NDIS: it really is a paradigm shift

With the passing of the NDIS legislation last week, we should genuinely celebrate the passion and commitment of politicians to set aside their traditional divisions to do what is the right thing, but perhaps a little later than what any of us might have wished.

Here we are now 11 weeks from launch – what have we got?

I don’t like the term paradigm shift. I think I hear it too much in my life. I think we wake up every morning and think we’re paradigm shifting where most of the time we’re just waking up in the morning.

I think we’re overusing such terms and sometimes we devalue them but every now and again something comes along that genuinely is a paradigm shift and the NDIS is one of them.

If you want to get a sense of why it is a paradigm shift, I suggest you go to the legislation that was passed by parliament just 10 days ago (available here). It does all the usual things that legislation does but when it gets to the object of the act, the first thing it says is not that we will do good to poor helpless people with disabilities and their families or we will set up a new national bureaucracy.

It doesn’t even say we shall establish a national disability insurance scheme – the first objective of the act is to contribute towards the progressive realisation of rights set out in the United Nations Convention for the Rights of People with Disability and that is the first driving force of the law.

For me that looks like the beginnings of a paradigm shift – moving away from looking after people in a sometimes paternalistic way. We move into a situation now where the Australian Parliament says what it is doing for people with disability is under the National Disability Strategy, committing itself to the progressive of realisation of rights. That seems to be an indication in a direction that people with disability and others have campaigned for sometime and it is refreshing.

So what are we doing now?

We are building this agency to open the doors in just 11 weeks’ time. What’s the plan? It’s called making it up as we go along.

That is a good thing because, if it is true as the Productivity Commission said, that the current system of support is unfair, fragmented, inefficient and underfunded, it would be insufficient to say that we will take all that we’ve done before, that we will double the budget to take it to $16.5 billion in five years now and simply plant that arrangement in the lives of people with disabilities and their families, because that would just look like more of the same.

We are breaking new ground, building on the best practice that has been there in service user-control initiatives that have existed across Australia sometimes for up to two decades, learning from the lived experience of people with disabilities in Australia and overseas because this is not a new idea.

I have to say without claiming any personal credit for it that I was involved in supporting the first three people in Scotland who ever had an independent living support package of the type we’re now talking about in Australia – Wilma, Archie and a guy called Shand living in poor public sector housing on the outer edges of some of the most deprived parts of Edinburgh. I was involved in helping set up their packages in 1988.

These ideas are not new but we are beginning to move them into the mainstream of support. We are transitioning from that system that has been providing support in a patchwork way for people with disabilities and responding to crisis circumstances that have always been indefensible.

We will gradually move to a new system with an intention to empower, enable and give within a rights-based framework people with disability and their families more flexibility, greater choice and more control over the support they receive so that they can live better lives.

In 11 weeks’ time we open seven offices in the four launch sites in the Barwon region of Victoria, in the Hunter area of NSW, across the whole state of SA for kids from birth to 13 over the next three years and in the whole of Tasmania adolescents 16-24 years and then from next year in Canberra.

One state government, NSW, has signed up to the full scheme. It’s critical that the rest of the states and territories sign up to the full scheme so the scheme can operate in every part of Australia because as a consequence of the COAG agreement on 7 December last year in which all governments of Australia joined up to this joint venture, each government is committed to a program over time that will make sure the National Disability Insurance Scheme becomes real in the lives of up to 420,000 individuals with disability.

How does this shift take place? Over the next two weeks we will conduct hundreds of job interviews to try to get people who are going to be the senior planners, the local area co-ordinators who will work with the broader community to make it more inclusive, the people who answer the phone.

Our state manager gets the keys on Friday 28 June and we open the doors on Monday 1 July, so we are trusting the IT guys will have the system ready to go over that weekend.

The Prime Minister was absolutely clear when she said this ain’t a trial, this ain’t a pilot – this is a launch.

I know about launches because my uncle worked as a riveter on the Queen Elizabeth II and I understand that once you launch a ship you can’t bring it back up the slug way. We are going on the 1 July.

We are telling the people of Australia, in a way we hope they will understand, that we don’t perform magic. Things won’t shift overnight. It’s not an unfair, fragmented system on 30 June and perfect on 1 July, but we are telling people this shift is coming and that it is irreversible and there are reasons for doing that. It is to give to people with disability the dignity and respect they deserve.

In my abstract, I set out a set of questions and have given no answers because some of them aren’t known.

But it is true that we are going to spend $16.5 billion of public money in five years. I have no idea what $16.5 billion looks like. I don’t know if it would fill this room or just occupy a tiny corner if you brought it in in $50 notes.

What I do know is that it’s about the same as the annual income of Qantas …the difference between the NDIS and Qantas is that Qantas took 103 years to get to $16.5 billion of income. We’re going to do it in five years, so there’s no pressure there on anybody.

All that seems fine to me not and I’m sold on it not just because it’s paying my wages – it’s because it’s absolutely the right thing to do to help us realise those rights.

How do we build equity, consistency of support and equal access to support across the vast range of Australia that you know much better than I?

I hope that we can achieve that and the part of the paradigm shift that matters is the final thing I’ll make reference to, which is the power shift.

Currently the power in the ways we support people with disabilities and their families is between the funder and the service provider, many of whom do excellent work.

That you might be in some circumstances where it is right that some of your support package goes to your aunty, your brother, to your uncle, or somebody down the street because they can give you the support where and when you need it, rather than waiting for six months for someone to fly in from Sydney.

That’s the way we will increasingly and progressively build this new system. We will trust people to be the authors of their fate, to make decisions about their own lives.

Having made those decisions, they can exercise real control about how those decisions are realised, the way it works for them as individuals with a rich cultural background that is different to this white Anglo-Saxon guy speaking to you now.

That’s where we’re going. We will need your help to get there.

Meanwhile, some related snippets from the Twittersphere… 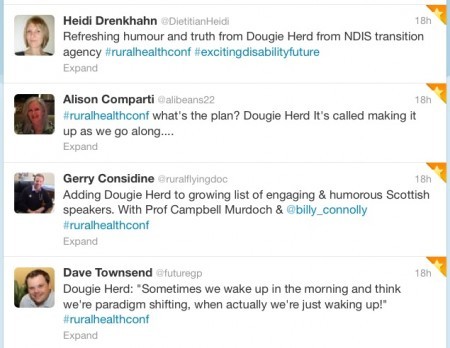 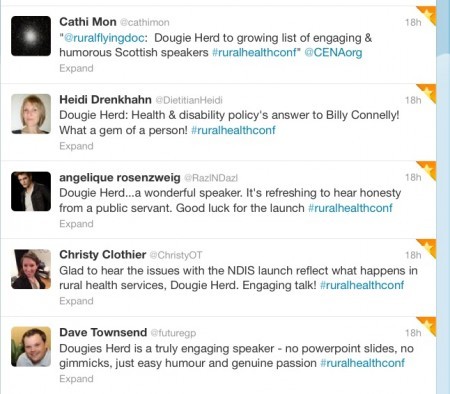 PrevPreviousWhat can we learn from Indigenous culture about mental health?
NextRecognising an “unsung hero” – and some vox pops from the National Rural Health ConferenceNext