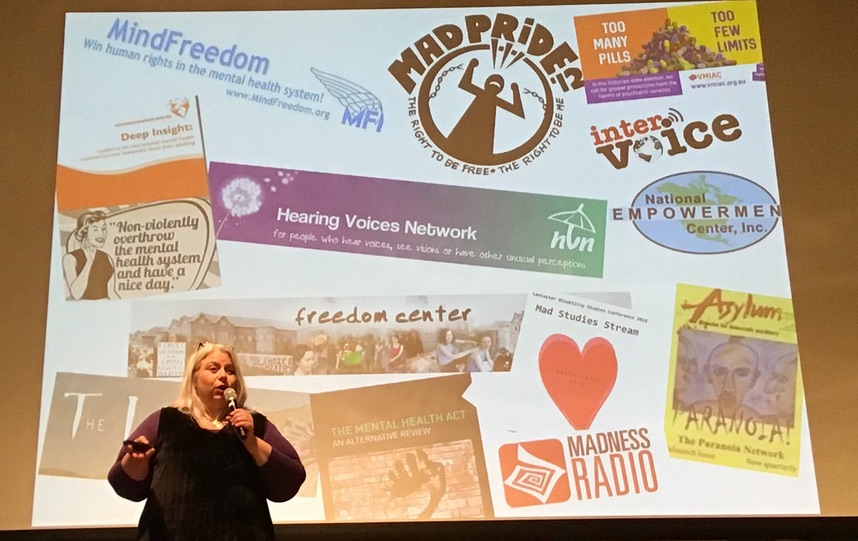 The harmful effects of mental health treatments – especially medication but also seclusion and restraint – were much-discussed at a recent symposium seeking to address health inequalities experienced by people with mental health conditions.

Efforts  to improve the physical health of people with mental illness must start with changed prescribing practices and ensuring that mental health services comply with international human rights obligations, the Equally Well symposium was told.

The two-day symposium came ahead of a report released last week in Victoria that urges the state’s Royal Commission into Mental Health to investigate rising rates and duration of seclusion in mental health facilities and a lack of transparent data about how and why seclusion is used at individual facilities across Victoria.

Jackson, who was diagnosed with depression and hearing voices as a teenager and later with bipolar disorder, asked those in the room aged 57 and over to stand up.

“That’s the age that most of us die at,” she said.

“If you are people with diagnoses like schizophrenia and bipolar, you probably don’t have much time left.”

Jackson told the symposium that when she went onto antipsychotic medications for the first time, she gained 22 kilograms in two months.

“It wasn’t about diet, it wasn’t about eating and drinking too much. It was about nothing other than the medication – that’s what caused it,” she said.

It was an overriding message from many people with lived experience of mental health at the symposium – that they face earlier death and worse physical health not because of their mental health, but due to a range of other factors, including some mental health medications and the discrimination they face in health services and health care.

“I’ve stopped calling it stigma,” Jackson said of how people with mental illness are treated in the health system. “It’s discrimination.”

She told delegates that she had felt uncomfortable, working previously in the public service, when a bunch of colleagues were talking about what they would do when they retired.

She realised it was because she did not expect to live to retirement age.

It was a shocking revelation, “but I know the statistics, the risks for someone like me who has lived for years with antipsychotics, the weight gain associated with that.”

A lot of that reflected the treatment she was given, she said, describing how a psychiatrist had “lied to me by omission” when she was first prescribed antipsychotic medication.

The only thing I was told about side effects was ‘you might gain a bit of weight’.

I don’t know about you, but gaining 50 kilograms in one year is not what I would call a bit.

This is not okay.”

The symposium brought together, for the first time, organisations and agencies across Australia that have signed up to the Equally Well Consensus Statement, a commitment to improve the physical health of people with mental illness.

The statement was initiated in 2017 by the National Mental Health Commission out of growing concern that people living with mental illness have poorer physical health yet receive less and lower quality health care than the rest of the population – and die younger. People with psychosis die 14-23 years earlier than the general population, it says.

Many contributing factors were raised at the symposium, including silos between mental and physical health services, diagnostic overshadowing, ‘lifestyle’ issues like smoking, and socio economic factors such as poverty and precarious housing.

But many speakers with lived experience also highlighted poor mental health treatment and practice as a powerful contributor and breach of human rights.

“Too many of us are disabled when we needn’t be,” said Victorian Mental Illness Awareness Council (VMIAC) CEO Maggie Toko.

Toko urged clinicians and services to cut back prescriptions of multiple antipsychotics at once, to consider lower doses, safer treatment options like therapy, and to start being honest with consumers about side effects and health risks of the treatments they prescribe.

Consumers are very clear that the biggest priority are the health problems that are caused by psychiatric treatment, the health problems we wouldn’t have if we hadn’t been to your services, like obesity, diabetes, cardiovascular disease, movement disorders and too much more.

We have the right to know if a treatment will shorten our lives, even if you force us to take it. Leaving us in the dark means that too many people never get the chance to try and improve their health.

If we are ever going to make a difference in the physical health of consumers, it starts with the prescribing practices of psychiatrists.”

Article 25 of the UN Convention on the Rights of Persons with Disabilities (CRPD) (see pic below) makes it clear what health services should provide to people with mental illness and other disability.

It includes requiring health professionals to “provide care of the same quality” to people with mental illness as to others, including on the basis of free and informed consent. 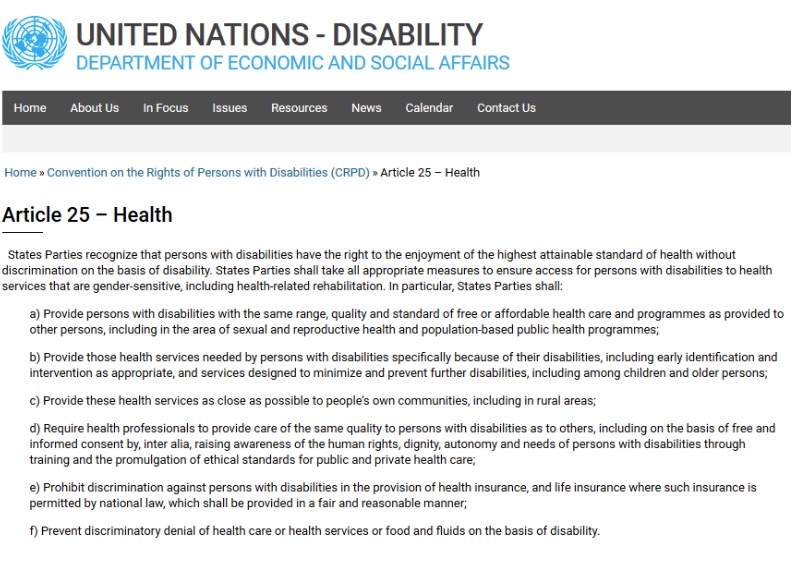 Co-presenting with Daya at a plenary session on ‘Physical health as a human rights issue’, RMIT mental health law academic Dr Chris Maylea urged mental health services and professionals to adopt “a rights-based approach and critique underpinning the work we do”.

He showed a slide comparing the quality of care offered to patients at Melbourne’s Peter MacCallum Cancer Centre, where there was even hairdressing and manicure services, versus the basic servicesavailable at most in-patient psychiatric services.

We can talk about resource issues but when you deny someone a level of service please look them in the eye and say, ‘because of resource issues I’m violating your human rights’.”

Daya has long been outspoken about the human rights breaches and risks to health of compulsory treatment orders and of the use of seclusion and restraint in mental health care, including she says as punishment, for example for smoking in in-patient services.

She led VMIAC research, published last week, on the use of seclusion in mental health facilities in Victoria, which highlights significantly different rates in services across the state and calls for more transparency and an ultimate end to the practice.

As well as causing significant psychological harm and breaching human rights, the report says seclusion can lead to serious physical harm as was seen in the tragic death of Miriam Merten at the Lismore Base Hospital in northern New South Wales.

Speaking on ABC radio after the release of the seclusion report, Daya blamed “poor culture and a lack of skills” in the mental health sector for high rates of seclusion.

“We see an alarming lack of counselling and therapeutic skills in the mental health workforce at the moment: they don’t always know what to do when someone is in serious distress, so they just lock them up,” she said.

Daya challenged the mental health mantra that compulsory treatment “is done in our best interests”.

“If you think someone lacks the capacity to make their own decision, the answer is not coercion to make decisions on our behalf, the answer is supported decision making,” she said.

Maylea said services that fail to recognise the importance of agency and autonomy will continue to struggle in other efforts to improve the physical health of people with mental illness.

Presenting the closing keynote address to the symposium, Jackson spoke with raw honesty about her experiences in health services.

She talked about the trouble she has to go through to convince each new doctor or specialty to take her physical health seriously, once she has to list her conditions: not just significant mental illness and cancer, but also serious side effects of medication, including often disabling shaking.

“I have so many chronic illnesses that it seems like I’m a hypochondriac,” she said.

She said it was not just her own health that was at risk from poor attitudes to mental health, but that of her family as well.

She talked about desperately taking a sick child a number of times over some days to a doctor who dismissed her concerns as delusional.

It was only when her husband convinced another doctor to act – “Fay is a bit unwell at the moment but she knows our kids” – that their child was admitted to hospital and diagnosed with gangrenous appendicitis.

Jackson urged mental health professionals and policy makers at the symposium to go away and “actually make a difference” as a result of the things they had learnt there. 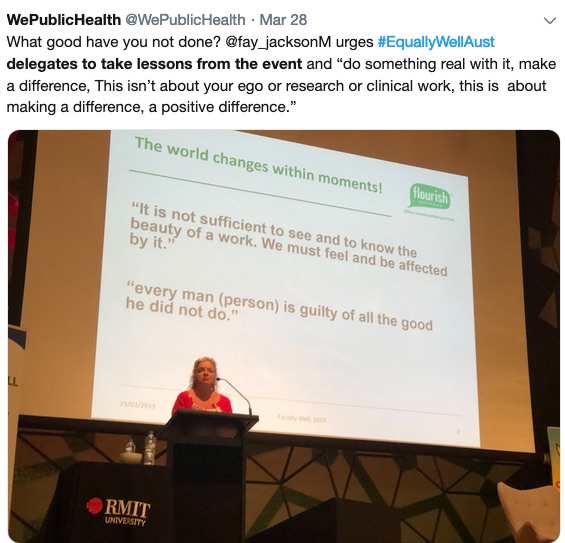 The symposium also heard about a Health Talk Australia project where researchers spoke to 29 people across Victoria from a range of backgrounds who have received various psychiatric diagnoses including psychosis, schizophrenia, bipolar disorder, and depression. 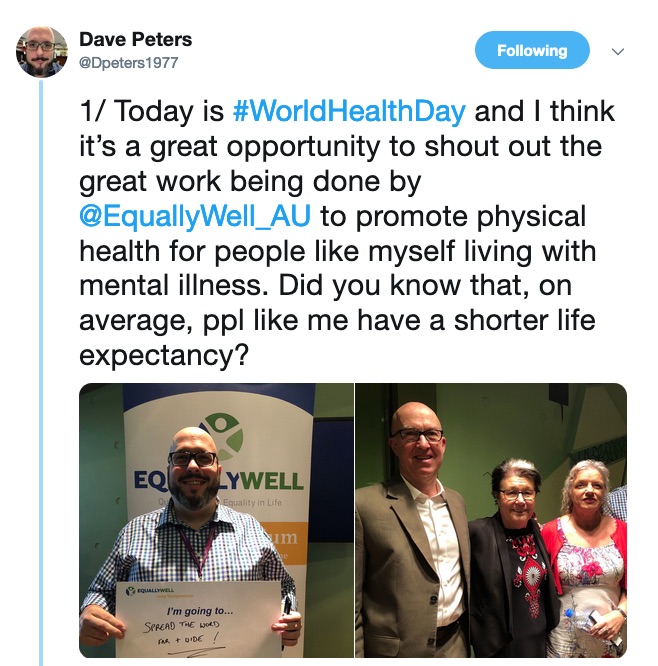 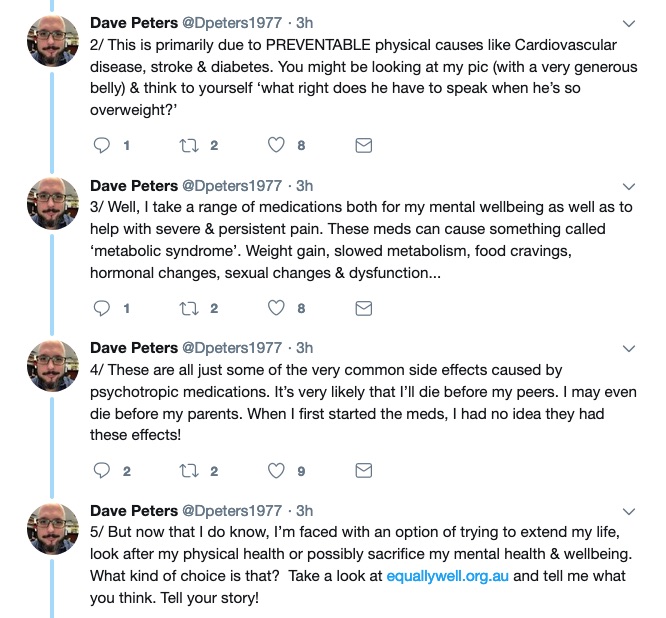 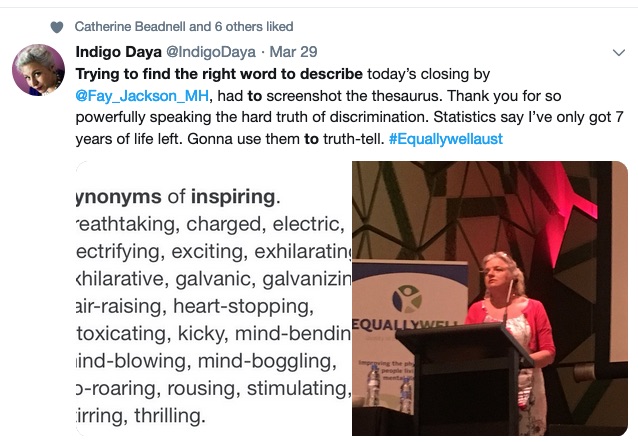 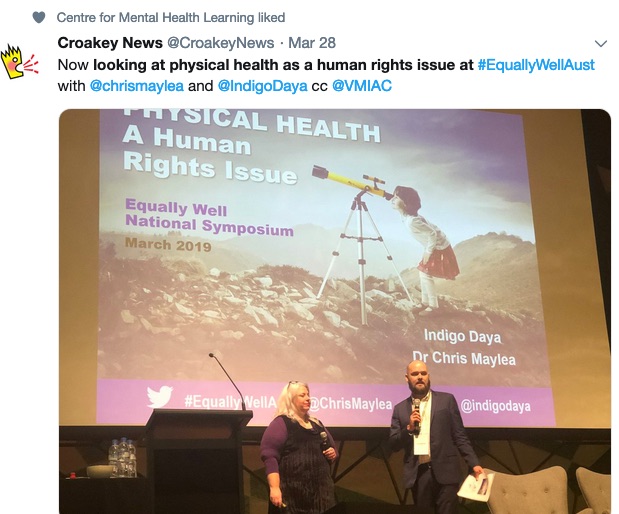 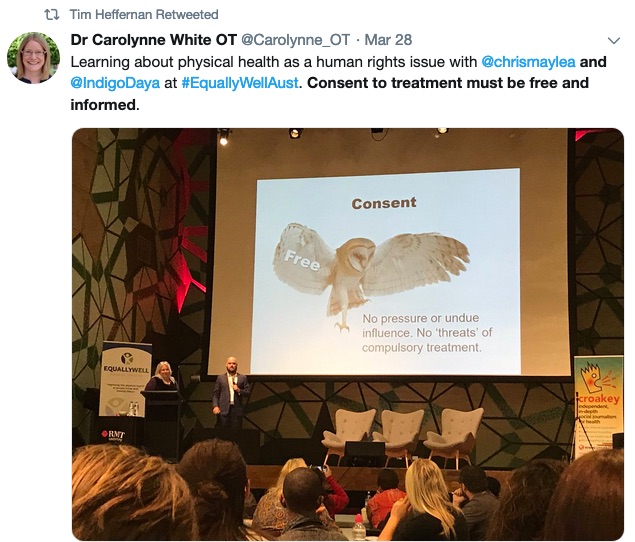 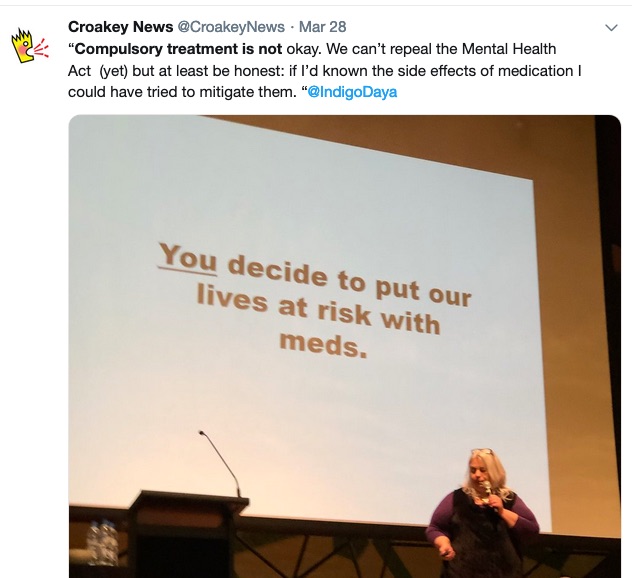 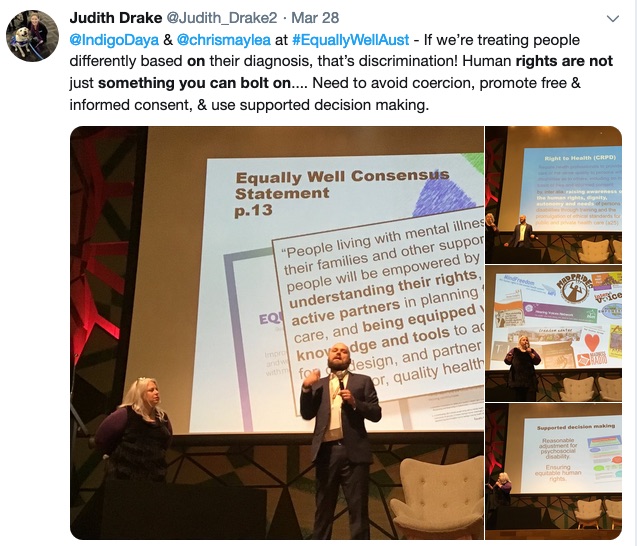 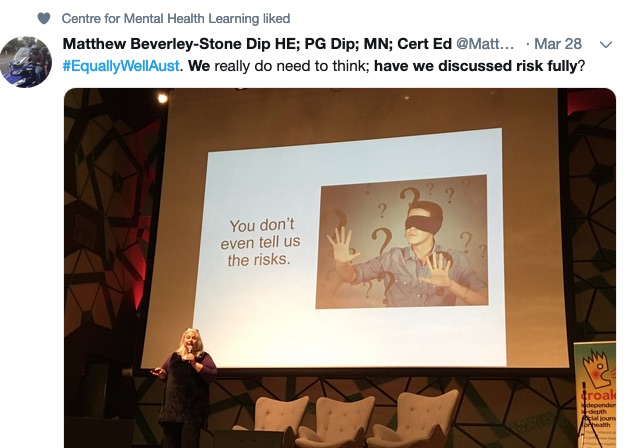 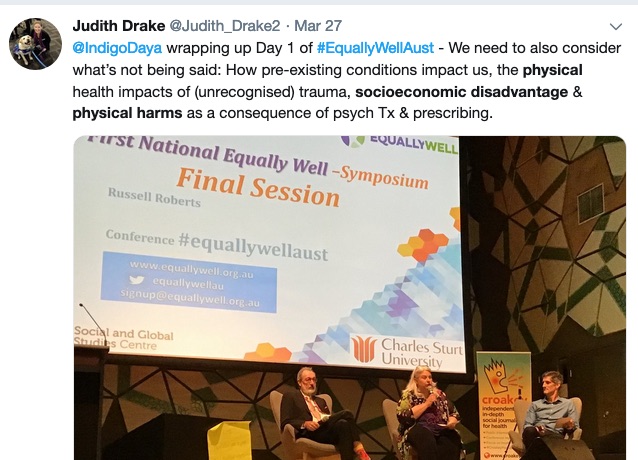 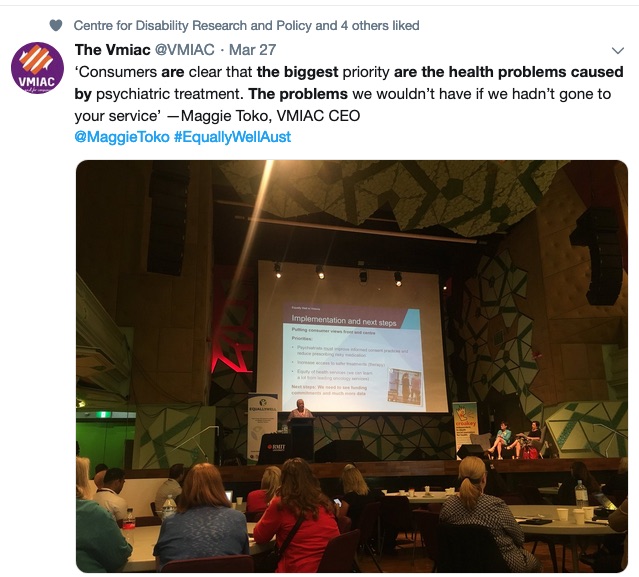 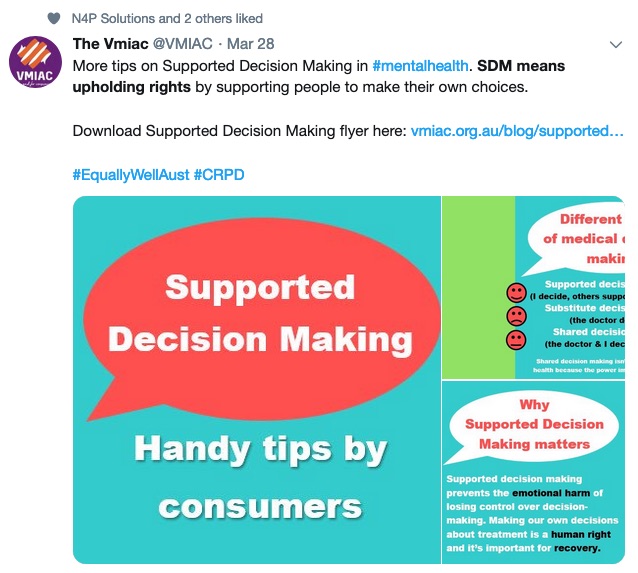