In the run up to this year’s International Day of the World’s Indigenous Peoples on 9 August, Amnesty International’s Indigenous Rights Campaigner Roxanne Moore looks at the human rights and health consequences of racism. 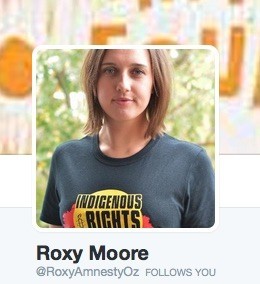 Racism is not only a violation of human rights, but it has serious health consequences. We have seen the very real impact of racism recently with the experience of Aboriginal footballer and former Australian of the Year, Adam Goodes.

In 2013, Goodes suffered backlash in media coverage and from the public for speaking out against being called “an ape” by a young spectator. More recently, Goodes was criticised after celebrating his culture by doing a war-cry after kicking a goal during the AFL Indigenous Round. After he spoke out about this event, and teammate Lewis Jetta also did the war-cry in support, football crowds steadily increased their booing of Goodes.

Goodes was shamed for exercising his rights to be free from racial hatred and to practice and promote understanding of his culture. These rights are protected under international law, and people are protected from racial vilification in Australian law under section 18C of the Racial Discrimination Act 1975 (Cth). No one should be targeted, publicly shamed or intimidated for speaking out against racism or for expressing their cultural identity.

Goodes has been the target of continued public racial vilification. Any Indigenous person can tell you why the “ape” comment is offensive: our mob used to be officially classified as “flora and fauna”, considered “less evolved” and not counted in the census, a history reflected in continuing prejudice about Indigenous people being “primitive”. The outrage against the war-cry was clearly racially motivated; a reaction to Goodes’ public expression of cultural identity and pride.

The booing eventually reached a level where it had a humiliating and intimidating impact Goodes, leading to him taking time away from the game.

There are serious consequences for those experiencing racism, including poor physical and mental health, and engaging in substance abuse. Several studies have demonstrated this link in Victorian Aboriginal communities.

Racism is considered to be critical to closing the health and life expectancy gap between Indigenous and non-Indigenous people, as a key social determinant of health, which can lead to other social problems. For example, the experience of racism increases substance abuse, which has been identified as a risk factor for Indigenous involvement in the justice system.

What needs to be done

To tackle racism, Australia must fulfil its international obligations to protect against racial hatred, to promote understanding and harmony between cultures.

But we also need to have some honest and uncomfortable conversations with each other, as Australians, about what racism actually is. A beyondblue study found that almost half of those surveyed did not recognise moving away from an Indigenous person when they sit near them as an act of discrimination and 1 in 10 did not recognise direct examples like verbal abuse as an act of discrimination.

We must continue to condemn and eradicate racism for many reasons: for the protection of the continually violated rights of Indigenous people; for the health of so many Indigenous people who experience racism; for Indigenous children’s pride in identity and culture; and for the healing of our nation.

• Roxanne Moore is a Noongar woman and an Indigenous Rights Campaigner at Amnesty International Australia.

Amnesty International has signed a joint statement in support of Adam Goodes, along with 150 organisations, to call for renewed efforts to stamp out racism in sport and everyday life.

• Previously at Croakey: Health sector joins those taking a stand against racism

• Meanwhile, as The Guardian reports ahead of tomorrow’s AFL game: “Geelong, show some decency to Adam Goodes, Australia is watching”. 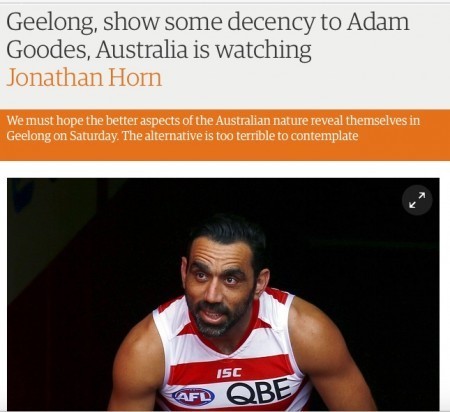