Home Healthcare and health reform chronic diseases Widening the gap: if they complain, who will hear them? On the loss of IRIS to remote communities

Widening the gap: if they complain, who will hear them? On the loss of IRIS to remote communities

The Federal Government’s Mid-year Economic and Fiscal Outlook (MYEFO) this week brought more bad news for health agencies and programs, at home and internationally. There was also much concern that the Indigenous and Remote Eye Health Service (IRIS) will cease operations at the end of this year.

In the post below, David Russell, Director of Policy at the Australian Society of Ophthalmologists, outlines what that will mean for remote communities, and particularly for Aboriginal and Torres Strait Islander people. 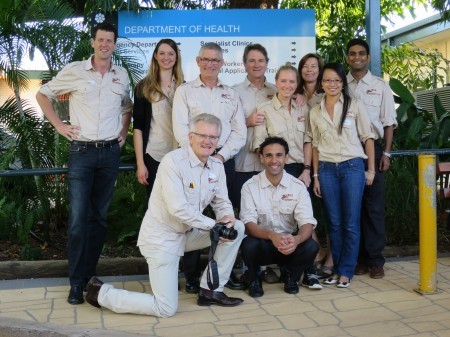 There are many injustices in the world but some seem particularly unfair. One such is the failure of the federal government to continue funding for Australia’s only fully national eye health program that saves the sight of those in the most remote corners of this continent.

The program is the Indigenous and Remote Eye Health Service (IRIS). It began in 2010 with $5 million provided by the federal Department of Health to the Australian Society of Ophthalmologists.

In those four years it has:

Not a bad record and the stories of those whose sight has been restored would touch the stoniest of hearts. But sometimes those who control the purse-strings just don’t want to hear. And the current budget climate appears to have created an epidemic of tinnitus among Ministers, MPs and senior bureaucrats.

The IRIS people say the soothing words they have received are charming at face value and reek of sincerity. But action speaks louder than words and all they have heard subsequently are the sounds of silence.

It is tempting to give credence to the notion that discontinuation of funding has been aided by the reality that the IRIS program has never been an active self-promoter and that the people it primarily serves have almost non-existent political clout.

This tale gives the lie to the cherished national myth that life in the outback, while undoubtedly tough, is somehow romantic. Those of us who crowd the continental seaboard need to believe that our ‘inland cousins’ are keeping alive the flame of what is little more than a tourism advertising stereotype.

Frankly, life in the harshest of our environments all too often carries the curse of blindness and eye disease. And while IRIS serves non-indigenous Australians, too, it is Aboriginal and Torres Strait Islander communities who can see the gap being widened not closed.

Dr Glasson’s city roots disguise his upbringing in the far west of Queensland and his dedicated commitment over two decades of making regular outreach visits to places like Longreach and Katherine where he helps save the sight of those who would often otherwise live in darkness.

Dr Glasson emphasises the human priority in outreach initiatives: “My one message to those who fund remote eye services would be the money needs to go to those organisations that deliver services, not just have meetings and produce reports. It’s important that the services are brought to the people, and not the people to the services. That’s the most cost and socially-effective means of delivering access and equity to our most remote Australians.”

The IRIS outreach teams comprise ophthalmologists, optometrists, eye health coordinators and ophthalmic nurses working collaboratively to provide a comprehensive skills base and wide experience in eye conditions. Dr Glasson says they find the experience very rewarding: “Interventions in remote Australia make the medical staff who provide the service feel satisfied that their time was used effectively and that the medical and surgical outcomes will change the lives of many of these most needy Australians.”

The difficulties faced by far-flung localities visited by IRIS teams are demonstrated by the isolated Aboriginal community of Tjuntjuntjara, which has a population of approximately 150 with minimal previous eye care.  There is an older demographic with chronic health problems of hypertension, diabetes and chronic kidney disease causing eye problems.  The nearest clinic is located in Kalgoorlie which is at least 9 hours drive away on a very bad road and travel can take up to 13 hours depending on weather conditions.

Due to difficulties in transporting highly sensitive equipment without damage, many such items have been purchased and installed in the communities serviced by IRIS.

As for the value of outreach services, Dr Glasson had this to say: “I have provided outreach services for over 25 years to many parts of Australia, but more particularly Western Queensland.  I have had the opportunity to work with some of the finest surgeons, nurses, and Aboriginal health workers and feel proud of what we have been able to achieve.

“I feel that the outcome in terms of changing people’s lives and restoring their independence is very fulfilling for all members of the team.  We need to stand up for what we believe is right, and it is all about fairness in ensuring access and affordability no matter where you live in this country.  I would encourage all young ophthalmologists, optometrists and nurses to take up the chalice and go and provide services to parts of our community that truly are in need.

“I also ask the federal government to continue to fund this essential and highly efficient service. I certainly remain absolutely committed to it!”

The photo shows the IRIS team at Katherine. Bill Glasson is holding the camera.