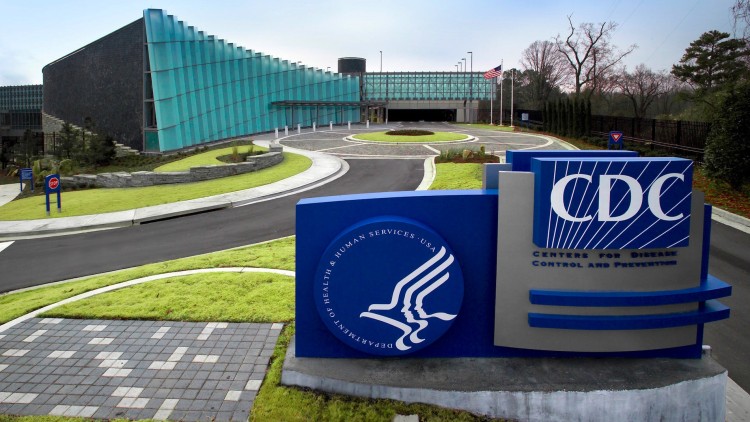 Will Australia finally get a Centre for Disease Control? If so, how might it work?

This Federal election outcome may help determine whether an Australian Centre for Disease Control (CDC) is established.

Alison Barrett reports from a Public Health Association of Australian webinar, held on 11 April, ‘Design principles for an Australian CDC’. The PHAA is urging supporters to #VoteForPublicHealth this election, and has nominated seven priority issues.

Renewed discussions for an Australian Centre for Disease Control (CDC) have highlighted that the major political parties in Australia take different positions on the matter.

In a letter to the Public Health Association of Australia (PHAA) in March 2022, the Federal Minister Greg Hunt advised that the Liberal-National Coalition does not support the establishment of a CDC.

In 2020, Hunt told Parliament that Australia’s COVID-19 outcomes demonstrate that we do not need a CDC.

In contrast, the Australian Labor Party has announced its support for an Australian CDC if it forms government this year.

In a statement, the ALP highlight Australia’s lack of pandemic preparedness and “breakdowns” in the federal system, specifically regarding aged care, quarantine and blame-shifting, as core reasons for a CDC. 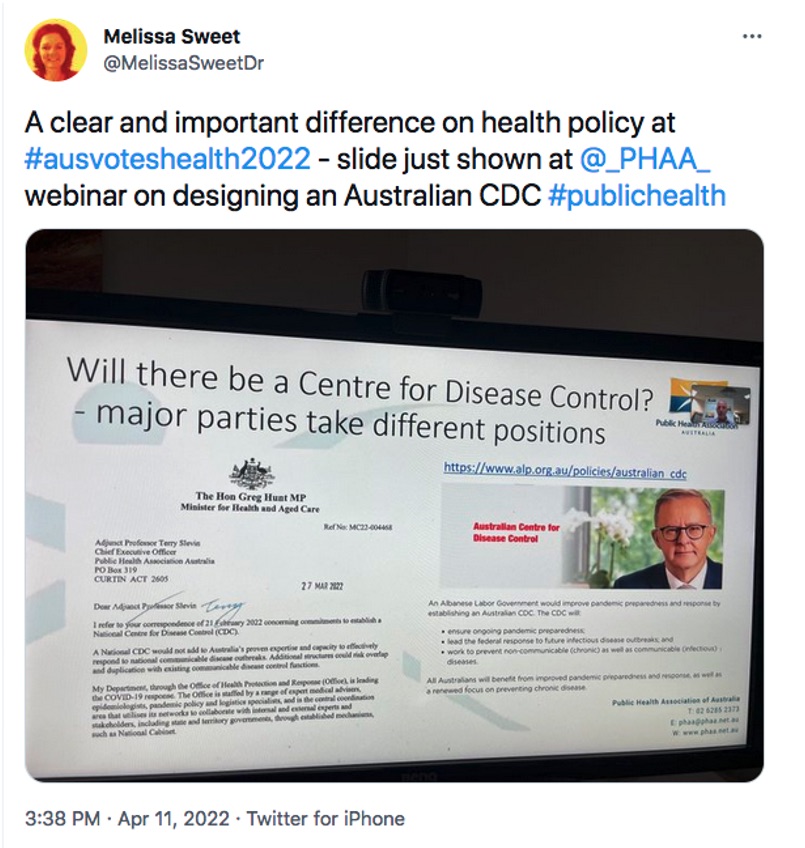 In recent months, the PHAA has renewed decades-old calls for Federal Government to establish an Australian CDC and it is a key focus of their 2022 Federal Election priorities.

Discussions about an Australian Centre for Disease Prevention and Control are not new – calls for a national, centralised body to provide disease surveillance, prevention and control have been made as early as 1987 by Professor Bob Douglas.

After multiple hearings and submission reviews, one of the recommendations of the Senate Select Committee’s COVID-19 inquiry was for “the Australian Government [to] establish an Australian Centre for Disease Control to improve Australia’s pandemic preparedness, operational response capacity, and communication across all levels of government.”

This week, the PHAA hosted a webinar to discuss what an Australian CDC might look like, key relationships, scope and roles.

That two of the panellists had COVID is a reminder that the pandemic is not over, and of the importance of ongoing public health and prevention interventions. 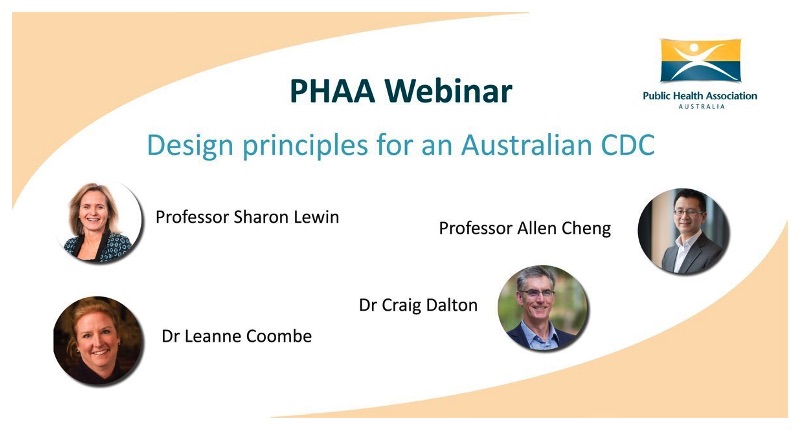 In opening comments, the webinar’s Chair and PHAA President Adjunct Professor Tarun Weeramanthri emphasised that an Australian CDC should be sustainable, strengths-based and built on solidarity.

“One of the challenges is to achieve some kind of consensus or solidarity in what an Australian CDC may look like,” Weeramanthri told webinar attendees.

In outlining points to consider for establishing an Australian CDC, Slevin highlighted that it is important to determine governance and what powers it has.

As evident during the pandemic, independent expert public health advice is critical.

Slevin said decisions would need to made about whether an Australian CDC would focus on infectious disease and pandemic preparedness and response, and whether it would also include a chronic disease prevention arm.

Relating to the confusing pandemic messages in Australia, Slevin told the audience that communications must be well-resourced within a CDC.

Accurate and reliable communications are fundamental to public health. 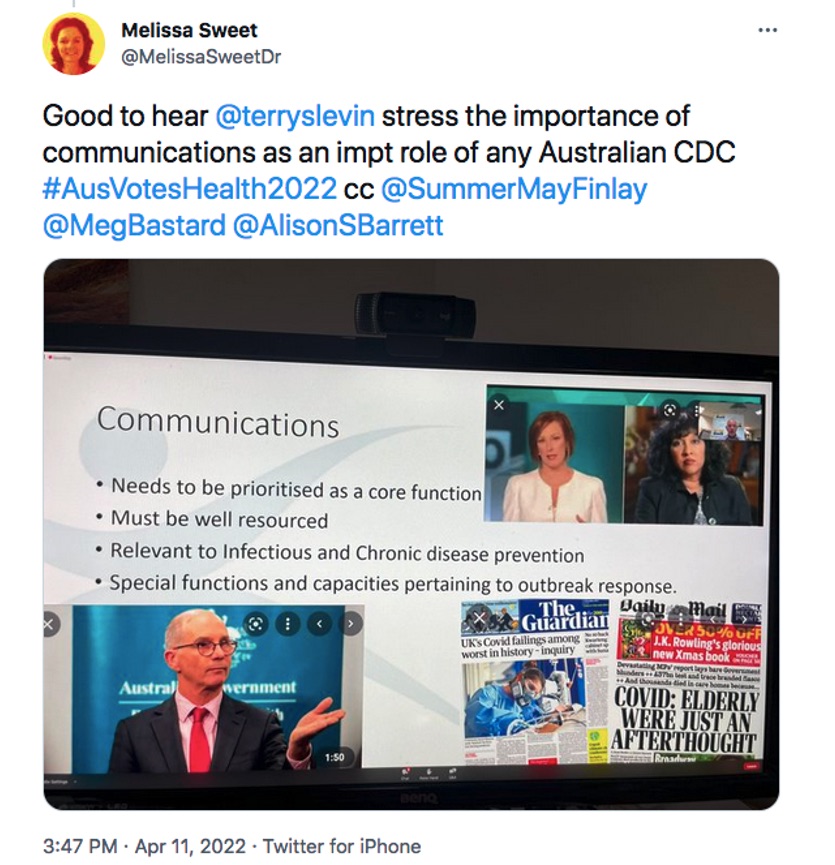 CDC and research – the relationships and connections?

Professor Sharon Lewin discussed how the Australian research community could benefit from a more coordinated approach and how this may link in with a CDC.

Lewin said that while a lot of great research is being done in Australia for COVID-19, it would be better if national coordinated research efforts were implemented to minimise duplication and improve impact.

In other countries, a pandemic research model that worked is the RECOVERY trial in the UK, which was supported by the Chief Medical Officer and Chief Scientific Advisor and provided invaluable data throughout the pandemic.

Lewin highlighted that key challenges and gaps in national research coordination in Australia include barriers to data-sharing across multiple jurisdictions and governance issues varying by State and Territory.

Integration and large-scale networks are the way of the future for an Australian CDC to become more coordinated with the research community, Lewin told webinar attendees.

Connecting clinicians and the CDC – how should it work?

Professor Allen Cheng from Monash University and President of the Australasian Society for Infectious Diseases talked about how clinicians could connect with an Australian CDC.

Public health and clinicians are often separated, Cheng told the attendees. It is important to bring them together.

Cheng talked about the potential scope and roles of an Australian CDC and that it might include standardised surveillance, clinical guidelines for treatment and infection control and clinical and training resources.

Similar to Slevin, Cheng said that an Australian CDC would have coordinated public communications, linked to research and involve stakeholder engagement.

Some international models of CDC exist and more discussions are required to determine which, if any, are most appropriate for Australia. For example, European CDC is a collaboration across Europe, in contrast to the centralised US CDC.

The Communicable Diseases Network Australia (CDNA) Framework is still relevant, Cheng told attendees, and is worth revisiting in the post-COVID-era.

Cheng highlighted that stakeholder input is vital in discussions about an Australian CDC and should include engagement with Aboriginal and Torres Strait Islander people and culturally and linguistically diverse people.

Functions and roles in surveillance, data capture and reporting

Based on his experience with the US CDC, Dalton discussed some unique features of the organisation that would be invaluable to an Australian CDC, including talent and knowledge management.

Internal mobility, workplace experience and development and transdisciplinarity are all valuable features of the US CDC, according to Dalton.

Dalton talked about the Emerging Infections Program (EIP), which is a partnership between the US CDC, local health departments and a local academic centre that has the capacity to respond to public health events.

OzFoodNet, FluTracking and VaxTracker are Australian programs based on the EIP model.

In concluding, Dalton told attendees that as there are many models to consider, we need to be clear on the other models and how they operate before determining what is most appropriate for an Australian CDC.

Dr Leanne Coombe discussed in more detail the many models that an Australian CDC could follow or adapt.

The Public Health Agency of Canada is part of the federal health portfolio and provides National Collaborating Centres for specific areas of public health including Aboriginal health and the social determinants of health.

Africa’s Centres for Disease Control and Prevention supports and provides resources to five Regional Collaborating Centres across the African continent.

The aim of the African CDC is to strengthen capacity of member states to prevent and control endemic diseases, such as HIV/AIDS and malaria, in addition to non-communicable diseases including mental health.

Strong design principles of the European CDC to consider are that it is an independent agency with clearly defined roles for key stakeholders. The organisation has a strong focus on leadership, capacity building and continual development and training.

According to Coombe, the ideal design principles for an Australian CDC are for it to be an independent body free from the influence of politicians, have secure and sustainable funding, strong leadership, accreditation and a clear career pathway into public health.

In concluding comments, Lewin emphasised that fragmentation has been a barrier to progress in Australia and that a researcher-informed response is essential.

Dalton reiterated the importance of being clear on principles of an Australian CDC from the outset.

Slevin stressed that social determinants of health have to be at the very core of an Australian CDC.

Community voices and civil society representatives need to be included in future discussions about an Australian CDC to ensure the social determinants of health and health inequities are comprehensively addressed (this week’s ACOSS webinar gives some good leads on key issues to address).

The PHAA could be instrumental in establishing opportunities for further discussions and making the best possible case for an Australian CDC to Government.

However, “the truth is that it will be a major undertaking [to establish an Australian CDC] – we need to be realistic, but also optimistic,” Slevin said.

It is clear from the robust discussion in the webinar’s chat function and on Twitter that the COVID-19 pandemic has renewed interest and need for a national, centralised body to provide disease surveillance and control.

The webinar can be watched here, and read a PHAA report about it here. 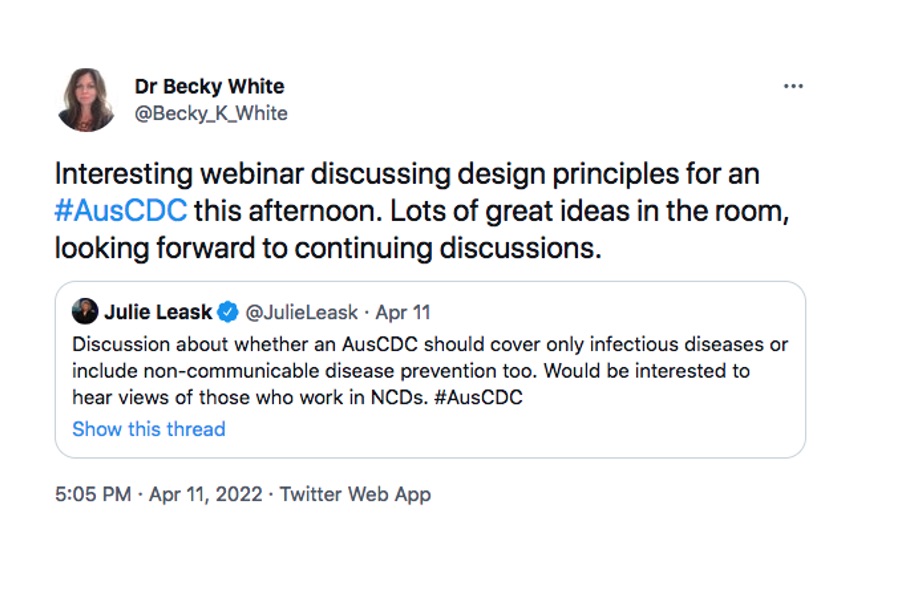 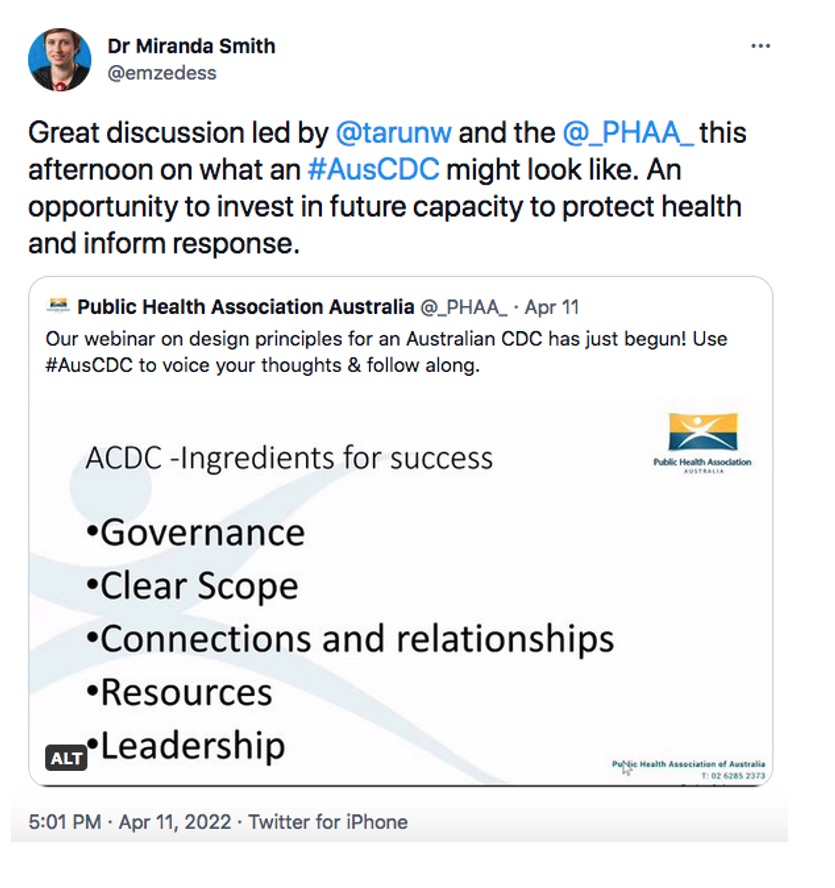 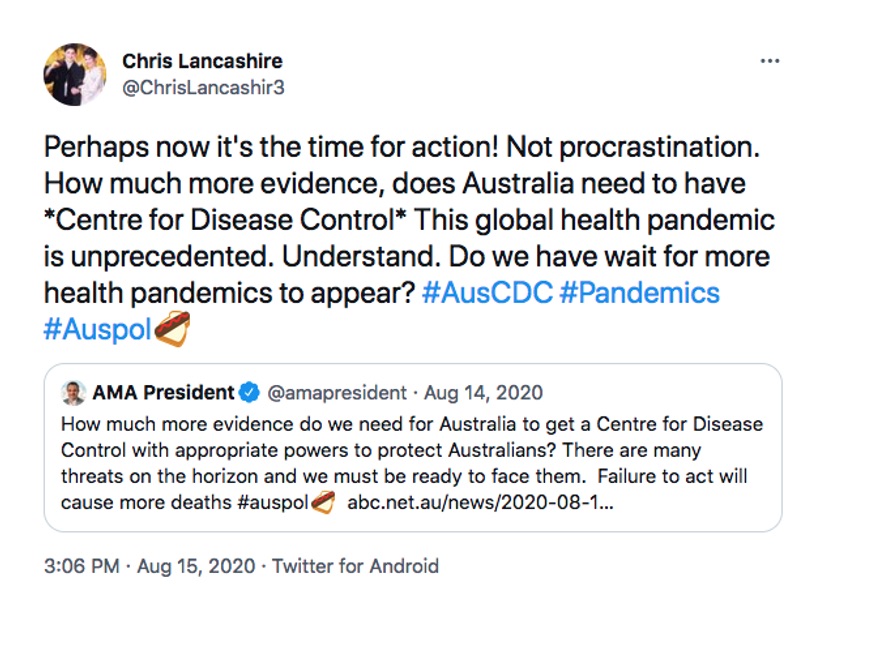 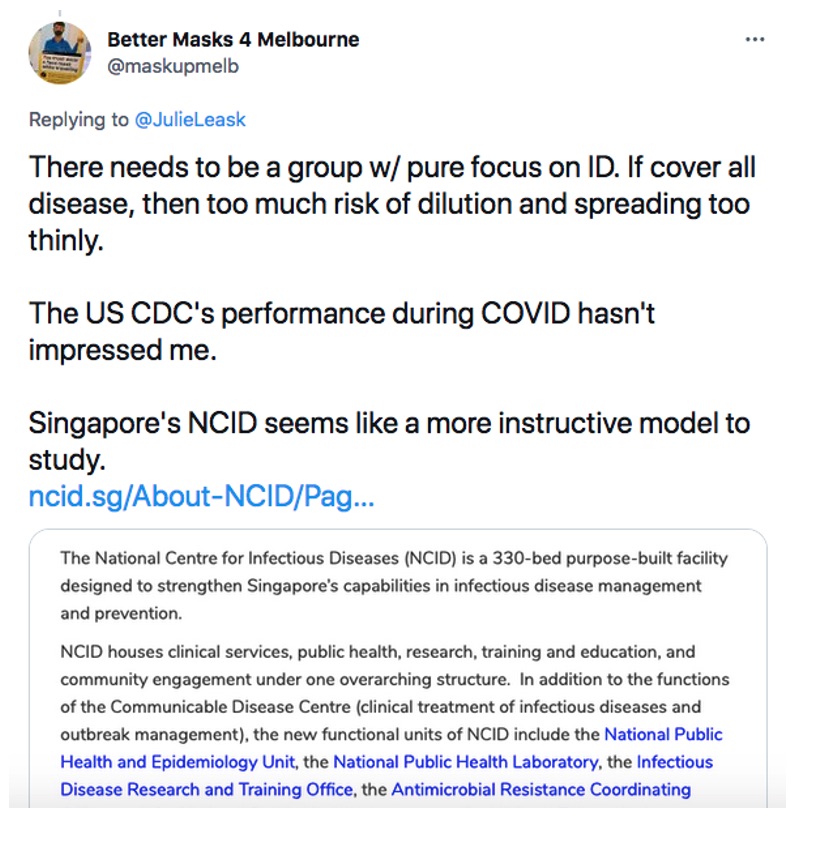 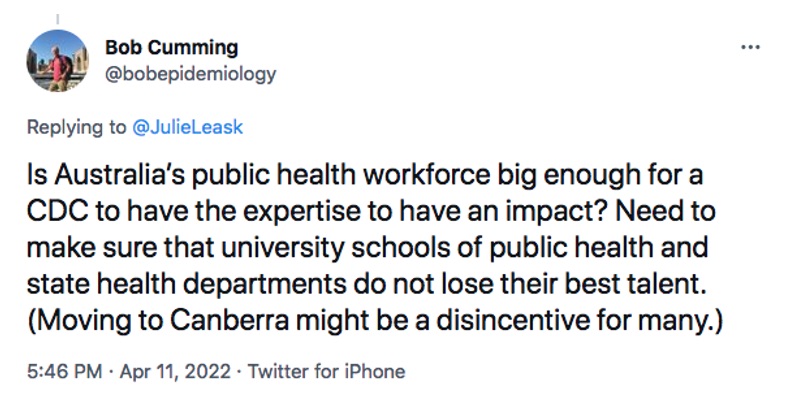