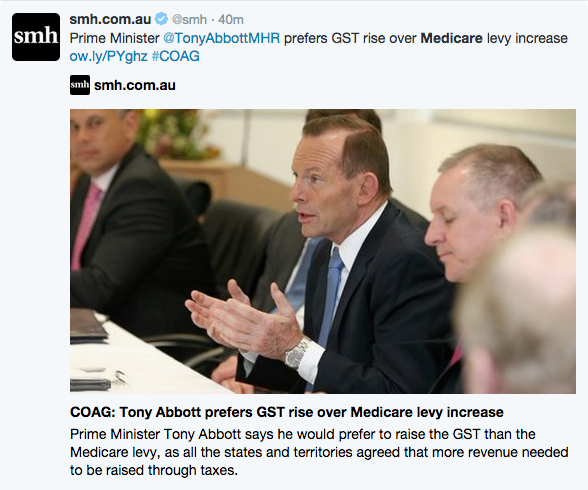 ‘Frankly, if we can have a conversation rather than a scare campaign, our country will be so much better off,’ said Prime Minister Tony Abbott as the 40th Council of Australian Governments (COAG) meeting wound up on Thursday.

Chance would be a fine thing perhaps – particularly with lifting the rate of the GST and increasing the Medicare levy being the key revenue items “on the table” to help Australian governments to meet a health funding shortfall they estimate to be set to rise to at least $35 billion per year by 2030.

Abbott quickly lined up his preference behind a GST rate rise, rather than Medicare levy boost.

This week’s meeting of the Prime Minister, Premiers and First Ministers from each State and Territory, and the President of the Australian Local Government Association (ALGA) – dubbed Australia’s first ‘Leaders Retreat’ – also called for a new focus on primary care and keeping people out of hospital. That of course is hardly new. It’s been the thrust of health reform efforts for decades – including efforts that the Abbott Government has undermined.

The leaders’ communiqué released today said the Leaders unanimously agreed to focus reform on health, education, infrastructure and housing, and said any revenue arrangements need to be “fair, efficient and lasting”. Here are some key excerpts:

All Leaders agreed to keep Commonwealth and State tax changes on the table including the GST and the Medicare levy. As a first step, there was agreement in principle by Leaders to broaden the GST to cover overseas online transactions under $1000. This matter will be referred to the upcoming meeting of Treasurers to progress in detail….

While Australia has one of the most efficient healthcare systems in the world, Leaders agreed that health is a top priority for all levels of government with a serious funding challenge made more difficult by our ageing population. The NSW Premier delivered a presentation that highlighted the growing gap facing all states on health and hospitals funding.

A new focus on primary care and keeping people out of hospital is necessary. When it comes to chronic care, the issue of diabetes, heart disease and mental health require particular attention. There was also recognition of the need to consider working towards extending Medicare to cover treatments in hospitals based on efficient pricing.

In relation to housing, Leaders focussed on greater access to affordable housing, increasing supply and better access for vulnerable people to social housing. The Leaders also recognised that a place to call home was a fundamental human need. There was agreement to look at ways to reduce spending duplication between the Commonwealth State Housing Agreements and the Federal Government’s provision of rental assistance to low income people.

There was a unanimous commitment among Leaders that we need to confront these issues head on and keep an open mind on ways to better fund the needs of our citizens. Taken in parallel with the Tax White Paper, Leaders agreed there is an opportunity to consider more durable revenue arrangements to address growing financial pressures facing all governments. Any revenue arrangements need to be fair, efficient and lasting.

It said leaders will consider, at their next meeting later this year, more developed options to be progressed by individual leaders informed by an Expert Panel:

See below for statement from the Australian Healthcare and Hospitals Association (AHHA) and Public Health Association of Australia (PHAA), ahead of a think tank event in September on sustainable funding for public hospitals which says:

Any reforms considered by the First Ministers at the COAG Leaders’ retreat this week must consider the impacts on funding for public hospitals and consumers’ already significant out‑of‑pocket expenses, particularly for the most vulnerable low income Australians and those with chronic and complex conditions. Equally, they must be patient-centred with a focus on safety and quality of care that is affordable for all Australians.

This joint letter, published ahead of COAG, from the mental health sector is calling for urgent action on reforms COAG agreed to in 2012,, including the adoption of clear targets and indicators for improving mental health outcomes as well as a fully developed and funded national agreement on mental health reform.

In his speech on Wednesday to the National Press Club, Australian Medical Association president Brian Owler said the  Federation Paper being discussed by the leaders was “a modest summation of payment options…not a vision for health care.”

I want our leaders to know that the hardworking and dedicated doctors in our public hospital system are frustrated – very frustrated.

You get to the point that you stop seeing patients because you don’t want to add any more to the waiting list.

The patients return again and again to their GPs to see if there is anything else that can be done while they wait for their appointment – sometimes for two years before they get on the wait list for surgery. This is a wait list that can take another year.

Elective surgery is anything but ‘elective’. It includes cancers and life-threatening conditions.

Meanwhile, people suffer. They can’t work and support themselves or their families. These patients are in pain, and debilitated.

The funding of our public hospital system is not an argument for the abstract.

It is about those in our society who are suffering, about those who are getting left behind.

While I welcome the discussion today about future funding of health, this is the message that I want to send to our leaders today. Sort this mess out. Fund our public hospital system properly, and don’t keep leaving the sick and the suffering behind.

See also his further comments in response to questions https://ama.com.au/media/ama-transcript-national-press-club-qa 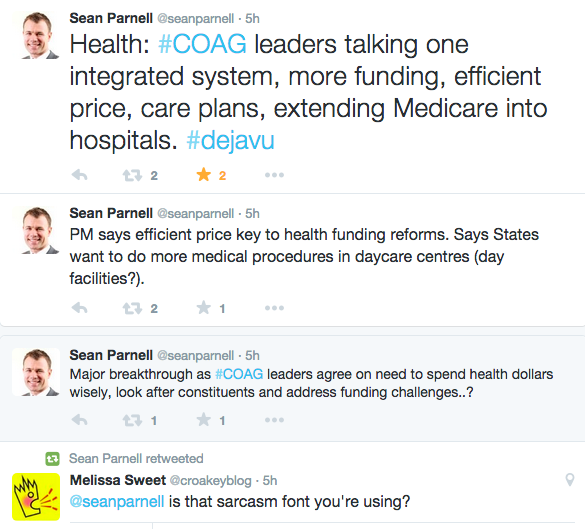 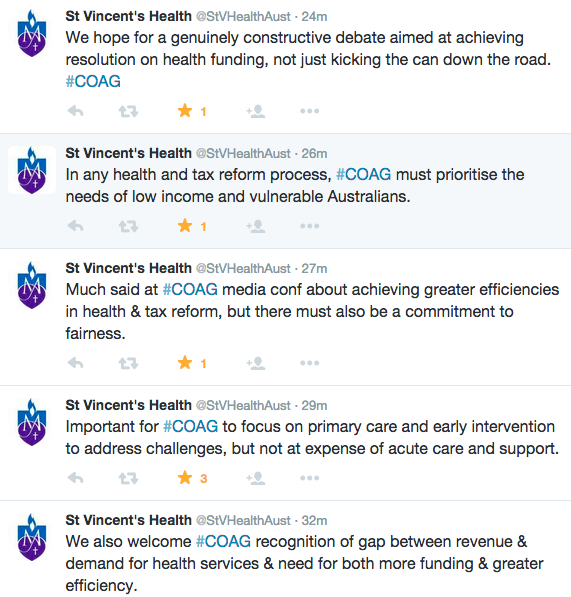 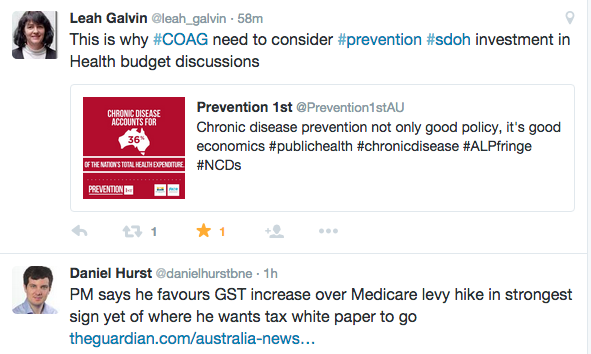 Statement by AHHA and PHAA

“For Australians to have an accessible, equitable and efficient universal healthcare system our political leaders need to consider sustainable and durable long-term funding arrangements that support an efficient and holistic health system, rather than just short-term fixes,” said Alison Verhoeven, Chief Executive of the Australian Healthcare and Hospitals Association (AHHA).

“In raising revenue it is critical that Australia’s First Ministers commit to progressive taxation systems.  For too long the middle and lower income earners have been subsidising wealthier Australians,” said Michael Moore, Chief Executive Officer of the Public Health Association of Australia.

Current public debate is focused on the merits of increasing the GST over the Medicare Levy as a way to cover this funding shortfall, and issues of equity and the effect on the disadvantaged are being discussed.

Less prominent, but just as important, is the role the private sector has in the provision of health and hospital services along with the associated increase in out-of-pocket costs. Since 1999, a number of Commonwealth initiatives—financial carrots and sticks—have incentivised Australians, particularly the better off, to purchase private health insurance with the aim to relieve pressure on the public system.

But international experience shows that private health insurance buys more expensive healthcare than tax‑funded care, and the quality is not necessarily better. The OECD’s most recent figures show health spending in the United States reached 16.4% of GDP in 2013, well above the OECD average of 8.9% and the Australian rate of 8.8%. As for quality, the Commonwealth Fund consistently ranks the United States last when compared against the health systems of other advanced economies. Australia was ranked fourth.

Public hospitals are obliged to provide free emergency services, equitable access to all persons regardless of geographic location and have a major role in developing the health workforce through clinical training and research. Hospitals in rural and remote communities are also almost entirely in the domain of the public sector.

In contrast, private hospitals exist in response to patient’s willingness to pay with around three-quarters of private beds being located in capital cities and tending to specialise in a limited range of surgical procedures and provide more elective procedures than public hospitals. Few private hospitals have emergency departments.

The AHHA will be analysing these issues in a Think Tank on Sustainable Funding of Public Hospitals being held on 15 September 2015. This event is bringing together a number of health sector leaders to discuss sustainable funding of public hospitals in the context of the Commonwealth Government’s white paper processes on reform of the Federation and reform of the tax system.

“Any reforms considered by the First Ministers at the COAG Leaders’ retreat this week must consider the impacts on funding for public hospitals and consumers’ already significant out‑of‑pocket expenses, particularly for the most vulnerable low income Australians and those with chronic and complex conditions. Equally, they must be patient-centred with a focus on safety and quality of care that is affordable for all Australians.

“A focus on efficiency is also a practical and sensible approach to addressing sustainability of the healthcare system rather than shifting costs and increasing out-of-pocket expenses. Any reform proposals considered by the First Ministers must focus on improving effectiveness, efficiency and value‑for‑money,” said Ms Verhoeven and Mr Moore.

PrevPreviousLifting the lid on Nauru and doctors concerns, as Labor moves towards asylum seeker ‘turnbacks’
NextOn the risks to health, environment that must be dealt with in the TransPacific Partnership AgreementNext