Will we add more years to our lives? The flawed longevity assumption 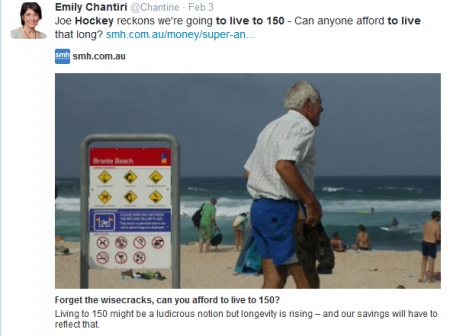 Treasurer Joe Hockey copped quite a lampooning when he raised the prospect of  people living until they are 150 to explain why Australians should accept cuts to government benefits and pay a greater share of their health costs.

But Dr George Crisp says we all are too happy to accept the idea that longevity still will steadily increase, as it has over the past century.

You might have noticed our Treasurer recently announced that we could expect to live to our mid to late 90s (on average) by mid century.

He was repeating a meme so pervasive that neither media commentators nor politicians would even question it, despite that the implications and consequences are far-reaching.

The problem is that it’s nothing more than an assumption; based on the extrapolation of recent historical trends.

Yes, our longevity has steadily increased over the last century, and has predominantly been achieved through public health measures. These include infection control through clean water and sanitation, regulations that have improved air quality and work safety, immunisations, family planning and tobacco control. For example, US lifespans have increased by approximately 30 years since 1900, around 80 per cent of which has been attributed to public health advances[i].

“Medicine”, or the treatment of the individual, has been a relatively minor contributor to all this. This  is particularly relevant because the popular expectation is that advances in medicine and technology will drive ongoing improvements in health outcomes, including longevity.

One area where medical treatment really has made a difference is the development of antimicrobials. But emerging resistance is now threatening to compromise our ability to treat even common infections: the spectre of resurgent TB being one important example. Many aspects of our health service would also be highly problematic if we did not have effective antibiotics.  Modern surgery and invasive procedures for example may be simply too risky in a post antibiotic era.

Improvements in infant and childhood mortality afforded by public health measures have had the greatest proportional effect on life expectancy, as the younger that people die, the more life-years that are lost.

The easiest-to-achieve interventions have now been done, meaning there is now  far less scope for significant further gains.  Instead further increases will need to come from changes to our inherent longevity as well as keeping people much healthier during their lives – and that is a cause for concern.

We have become increasingly sedentary and inactive. We spend more time commuting in our car-dependent cities and we eat too much energy-dense food.  We’ve created an obesogenic environment and it is reflected in the rapidly rising rates of obesity and type-2 diabetes. Not only is the prevalence of diabetes increasing, but so too the age of onset is decreasing. That younger onset means more people developing and living with complications.

There is a consistent association between equality and better health outcomes. Comparison between different countries shows it does not just affect the most disadvantaged groups in society, but all groups, including the wealthiest. In his 2010 report Fair Society, Health Lives, then UK Secretary of State for Health Professor Sir Michael Marmot found that between 1.3 and 2.5 million years of life were currently lost due to inequality in the UK.

Western countries experienced increasing income equality in the post-war years, but this trend has reversed over recent decades so that the gradient of wealth distribution has and is increasing. If this effect is as causally related as the evidence suggests, then we can expect to see worsening health and social outcomes as a result.

Climate change has been recognised as a major threat to human health. Wealthy nations like ours are more able to adapt than poorer nations, but we will certainly not be immune to the impacts.

As well as the more obvious direct effects from increasingly severe heatwaves, extreme weather events and worsening air quality, climate change will indirectly impact our health through its effects on natural ecosystems, the range and transmission rates of infectious diseases, food and water security and economic impacts, as well as the potential for large scale migration and conflict.

There is a range of other “expected surprises”, for example disease epidemics. The 1918 flu pandemic resulted in a brief drop in life expectancy and another episode could well have a similar effect if it also affected younger adults in the same way.

The point is, there’s no inherent reason to presume we will just keep living longer; on the other hand there are a range of foreseeable factors that will reverse and decrease life expectancy.

It is essential therefore that further quantitative and comprehensive analysis is done in this area before we accept recommendations for major policy changes or planning decisions around pensions, retirement age and health services.

George Crisp is MRCGP General Practitioner and WA Chair and National Committee Member of Doctors for the Environment Australia.

PrevPreviousWA backs away on “up to 150” remote communities to close, outlines process, but anger, anxiety continues
NextClose the Gap campaign says Indigenous health must be quarantined from #Budget2015 cutsNext