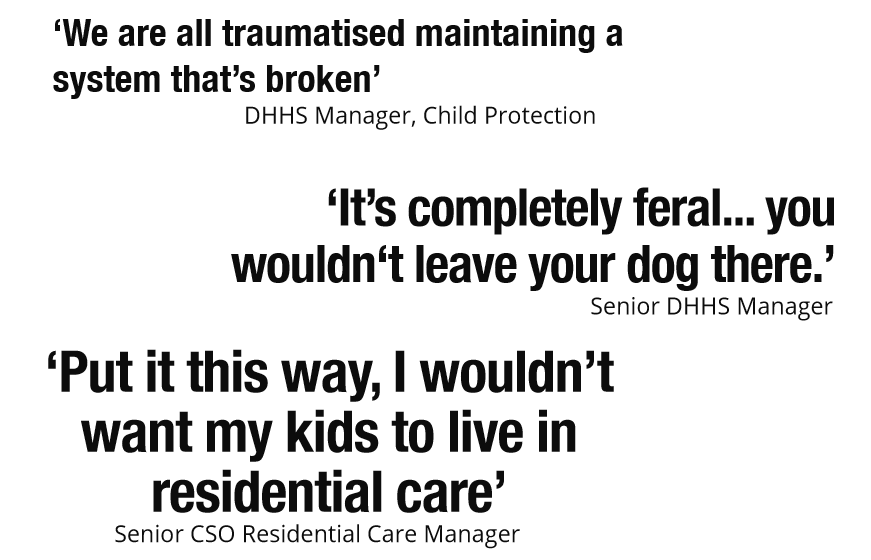 Will we need a new Royal Commission into child sex abuse in years to come?

The Royal Commision into Institutional Responses to Child Sexual Abuse has been shining an extraordinary spotlight on sexual, physical and emotional abuse against vulnerable children and young people and the failure of authorities to act.

As well as ‘bearing witness’ to personal stories so long hidden and denied, it will look for ways to prevent such abuse happening again, including with the recent release of a research paper that suggests organisations be held criminally responsible when their negligence results in harm to children. See this analysis by Monash University Law Professor Arie Freiberg.

But how much of its work is the redress of history? Are children in our care safer today?

This week a Senate Committee report urged that children be removed from detention on Nauru, with the finding that conditions were not “appropriate or safe” for detainees. This of course follows the Australian Human Rights Commission’s Forgotten Children inquiry and prompted a call from peak aid and social welfare organisations for the Royal Commission to be able to examine child abuse cases on Nauru.

At the same time, the South Australian Government revealed it wants changes to the state’s mandatory child protection reporting system, saying it is “groaning under its own weight” with excessive reporting.

And there are big questions to be answered in Victoria following the release of a disturbing report – “…as a good parent would…” – by the Victorian Commission for Children and Young People (CCYP) into sexual abuse or sexual exploitation of young people in residential care services in the state. 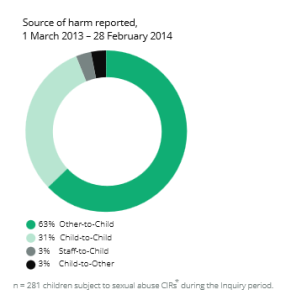 Led by Commissioner Bernie Geary, the CCYP inquiry found that the current system, overseen by the Victorian Department of Health and Human Services:

See media reports on the report’s release here and here.

The Commission found “an alarming level” of sex abuse and sexual exploitation, “variable” responses from authorities and that many children live in “appalling physical conditions”, “subject to restrictive and intrusive care practices and punitive limit-setting”.

[quote font_style=”italic”]”The physical environment of some residential care units visited by the Commission were deplorable,” it said.[/quote] 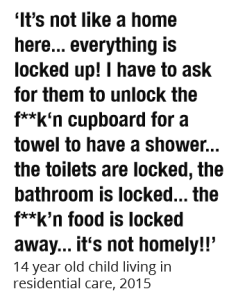 While it made a point of mentioning the passion and commitment of staff in the department and community service organisations that provide out-of-home or residential care, it said the current system “leads to fatigue, discontent and decensitisation” among staff and was highly critical of staffing skills, oversight and levels: the low skill base of some direct-care staff was “completely inadequate”, staffing levels – particularly overnight – were too low, substantial use of labour-hire and casual staff by some providers contributed to instability for children, and – critical to #JustJustice issues around Indigenous over-incarceration – it detected overreliance on police being called to attend residential care unit to respond to children’s behaviours “that are not of a criminal nature”.

[quote font_style=”italic”]”Such reliance on police may indicate that some staff are not adequately equipped or supported to respond to trauma related behaviours of vulnerable children,” it said.[/quote]

It said the availability of beds, rather than the child’s best interests, seemed to dictate most decisions about where children would be placed in residential care. This meant, it said, that children with disabilities and those as young as five years of age were being placed with children with known sexually problematic of abusive behaviours. See the case study.

“Most Aboriginal children in residential care are cared for by non Aboriginal staff who have limited cultural training,” it said.

Just as alarming, was that poor data monitoring and insufficient oversight of care providers meant the scale and extent of sexual abuse could not be adequately measured or responded to. Reminiscent of many of the issues emerging from the Royal Commission, it found:

Crucial to future oversight, it found that departmental monitoring of residential care was based on contractual performance only, with little to no monitoring of compliance with service standards and “virtually no focus on outcomes for children in care, thereby facilitating and environment where abuse can occur”. It warned:

[quote font_style=”italic”]We found that children and young people living in residential care experience multiple placements changes. They are exposed to other young people with high-risk behaviours. They lose contact with family, culture, school and community supports. They are at greater risk of creating lifelong institutionalised behaviours, developing mental health problems, substance abuse, experiencing homelessness and involvement with the youth justice system. They often repeat a pattern of intergenerational abuse and/or state care. Protecting these vulnerable children in residential care is important not only fortheir individual wellbeing, but also for the community, which ultimately bears the economic and social costs of our failure to effectively protect and heal them.[/quote]

The report contains case studies and detailed findings, including the warning that it “contains explicit material that may cause distress”. See also links to submissions from many of the key stakeholders.

Victorian Families and Children Minister Jenny Mikakos said she was “appalled and distressed” by the report and that the Government supported in principle all of its nine recommendations.

But like Nauru and the issues being raised in South Australia, it tells us that very little of the Royal Commission’s work is historical and that children in our care are still very much at risk.

Disclaimer: Marie McInerney works occasionally as a writer and editor for community sector organisations in Victoria, and has worked in the past for organisations such as Berry Street that provide residential care services and the Victorian Council of Social Service (VCOSS) which represents other service providers.

The featured image at the top of this post is of comments by departmental and sector staff made to the CCYP inquiry.