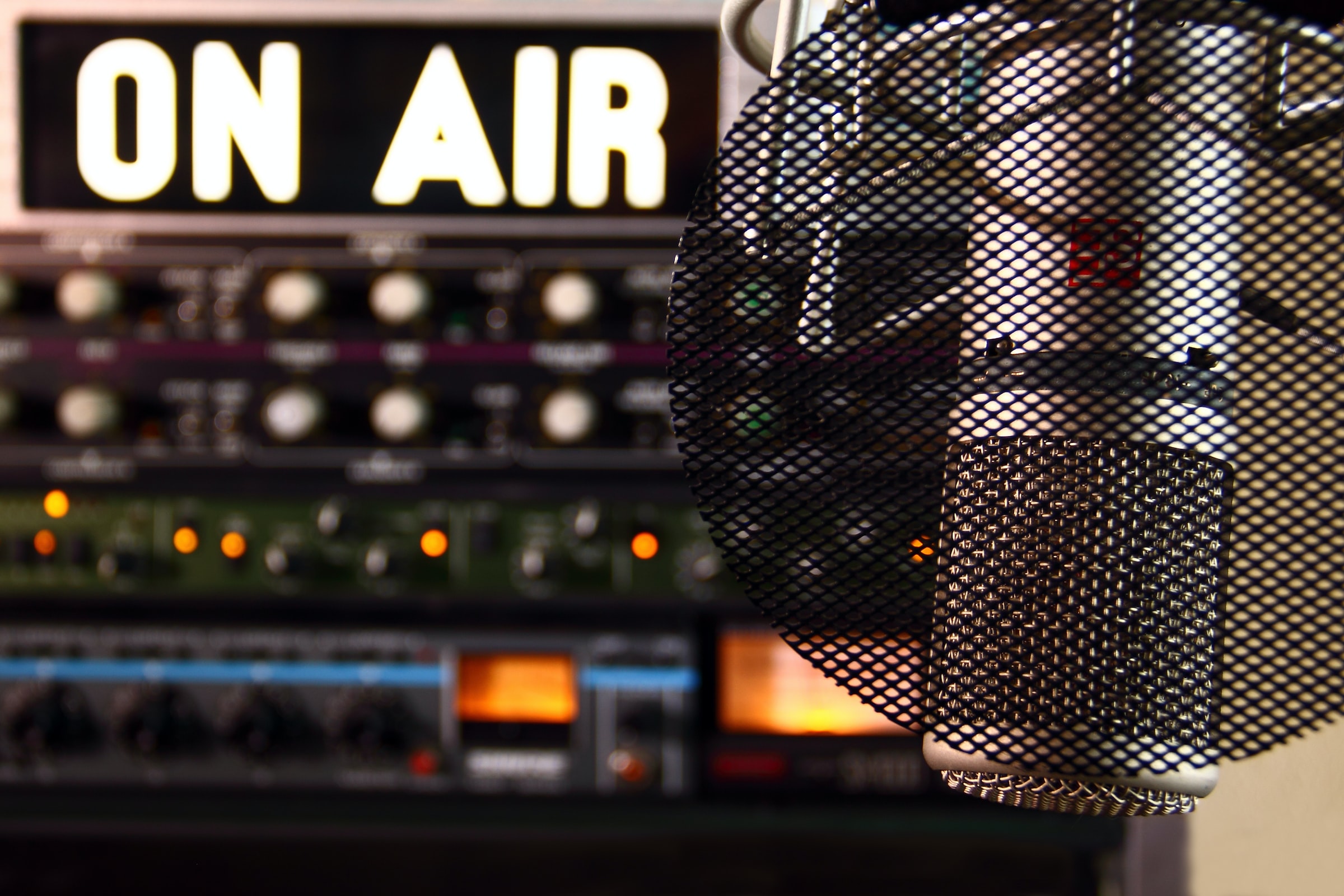 With media diversity now on policy agenda, an investigation of community radio’s importance in times of “polycrisis”

Introduction by Croakey: Media diversity is important for healthy democracies and also contributes to the health and wellbeing of communities.

This is especially so at a time of escalating crises – or polycrisis, a term that crops up repeatedly in the World Economic Forum’s latest global risks report, referring to “a cluster of related global risks with compounding effects, such that the overall impact exceeds the sum of each part”.

As climate disruption becomes more frequent and intense, the roles of media as frontline responders, sources of emergency news and information – especially at a local level – and platforms for holding governments, policymakers and service providers to account will become ever more important.

However, successive governments have dragged the chain in undertaking reforms to promote media diversity. Instead, we’ve seen how a media landscape dominated by a few powerful corporate players becomes a self-perpetuating system, as Croakey argued in our 2020 submission to a Senate inquiry into media diversity, independence and reliability.

Indeed, the News Media and Digital Platforms Mandatory Bargaining Code, one of the more significant pieces of media reform of recent years and which has been much promoted by its creators and beneficiaries, has received relatively little scrutiny or examination for its impact on media diversity.

Disappointingly, Treasury’s recent review of the Code showed little concern for its impact on media diversity, batting away such worries with this rather dismissive statement.

Now Croakey readers have an opportunity to contribute to the development of healthier media policy. The Australian Communications and Media Authority today announced a consultation on its proposed new framework for measuring media diversity in Australia, with submissions due by 17 March. The framework will help “support policy interventions and inform longer-term considerations on media reform issues, including potential changes to media diversity rules”.

Meanwhile, Griffith University researchers who are investigating the potential of community radio to play a lead role in supporting community resilience to climate change say the sector needs more support and resources.

“Further work and investment in this area will create a wealth of opportunities for local communities to voice their own stories of climate action that point to hope, empowerment and possibility,” they write below in an article first published by The Conversation with the headline, ‘At Fitzroy Crossing and around Australia, community radio empowers local responses to climate impacts’.

As rain poured down and rivers rose, the radio buzzed with static where you’d usually find Fitzroy Crossing’s community radio station, Wangki Yupurnanupurru Radio. The station was off air, but not offline. When they couldn’t broadcast, the Wangki team turned to Facebook to share emergency information.

They even put together audio updates in Kriol and other local languages. This was a community radio station making sure everyone in their community had access to information they needed. The broadcaster’s efforts are remarkable, but not unusual in Australia’s community radio sector.

These are just a few stories of how community radio stations support their communities through the most extreme impacts of climate change. 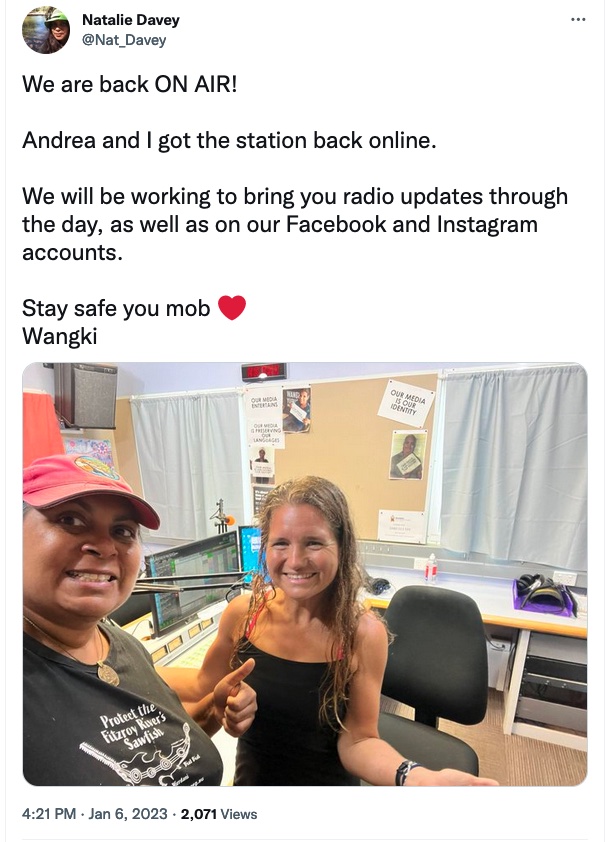 Complex, diverse and more popular than you might think

Australia is home to a vibrant and well-established community radio sector. An estimated one in five Australians tune in to more than 450 community radio services each week. There are stations focused on their local area, stations serving communities of different lived experiences and interests, and stations catering to particular cultural and linguistic communities.

Unsurprisingly, then, programming is diverse. There are shows about the experience of prison, about being “out” in the Outback, about gardening, politics, books, bicycles, unions – just about anything you can think of.

But why talk about climate change on community radio?

Our research project, Warming Up, is exploring the role of community radio in supporting community resilience to climate change. We interviewed station managers and presenters at 12 stations across New South Wales and Victoria.

What we found has been impressive. Running on the smell of an oily rag, or as one interviewee put it, “lots and lots of gaffer tape”, community radio stations are playing a huge role in preparing communities for a climate-altered world.

But why is community radio such a valuable tool? We identified the following reasons.

Climate change is often talked about as a global issue – ocean temperatures, melting glaciers, world leaders negotiating or appearing to. While that’s true, the impacts will be felt most acutely in our own backyards. When a new type of pest infests our veggie garden. When our walk on the beach involves navigating eroded sand cliffs and exposed rock walls. When the rain gets heavier, for longer, and mould blooms in corners and cupboards.

While times of disaster are what immediately come to mind, the everyday impacts are also the reality of a climate-altered world. It takes local experiences and responses to find local ways of adapting to and mitigating these impacts. 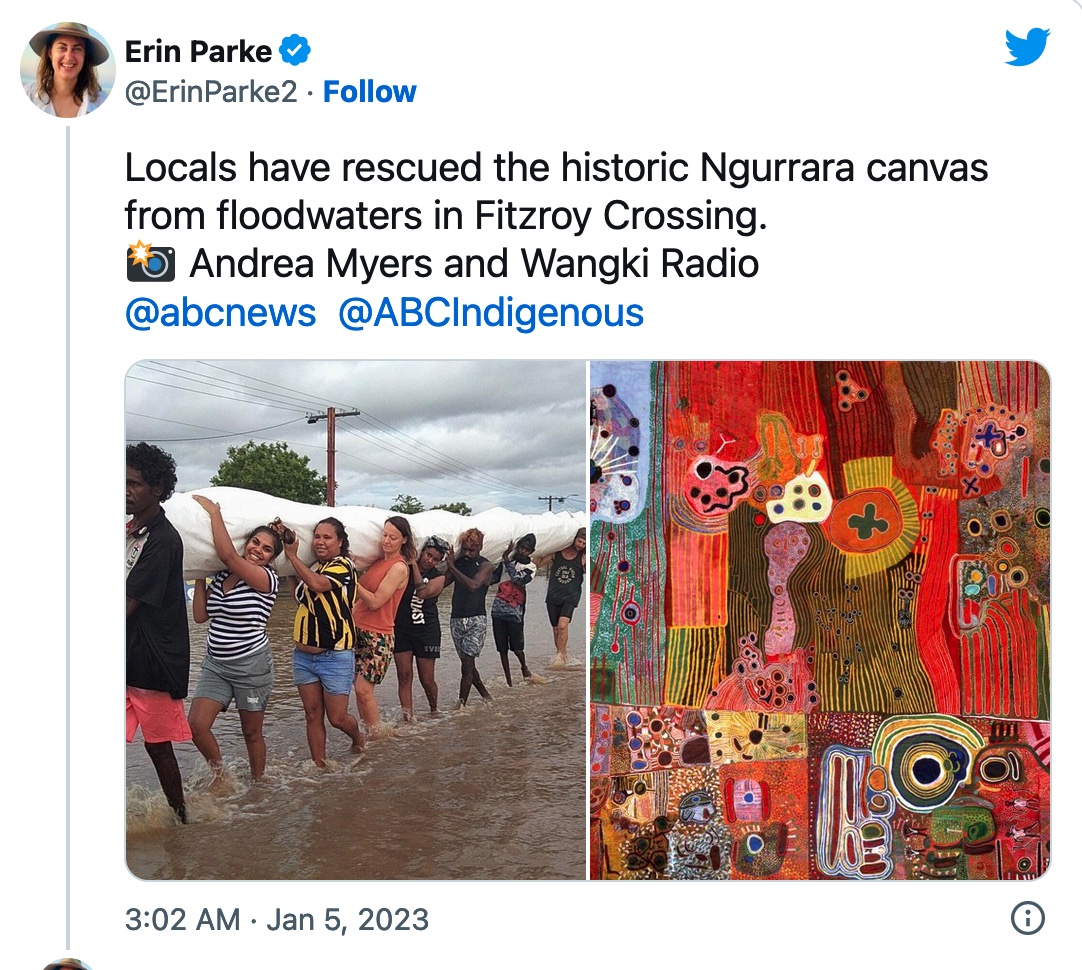 Climate change is not experienced evenly. Those least responsible bear the brunt of impacts; that’s part of the slow violence of climate change.

Community radio is needed to serve communities under-represented in the mainstream media. They include First Nations people, the LGBTIQ+ community, older people, young people, people affected by disability, and multicultural and multilingual groups.

These groups have unique communication needs and vulnerabilities when it comes to climate change. For example, one of our interviewees talked about the importance of community members sharing information – for this particular multicultural group, a trusted, familiar voice carried more weight than an unknown official.

Read more: Ethnic media are essential for new migrants and should be better funded

For other groups, language was important. One of the Aboriginal broadcasters we spoke to told us that while climate change was not specifically discussed, there were constant discussions about how to best care for Country.

Subtleties like these make all the difference when it comes to meaningful discussions about climate change. 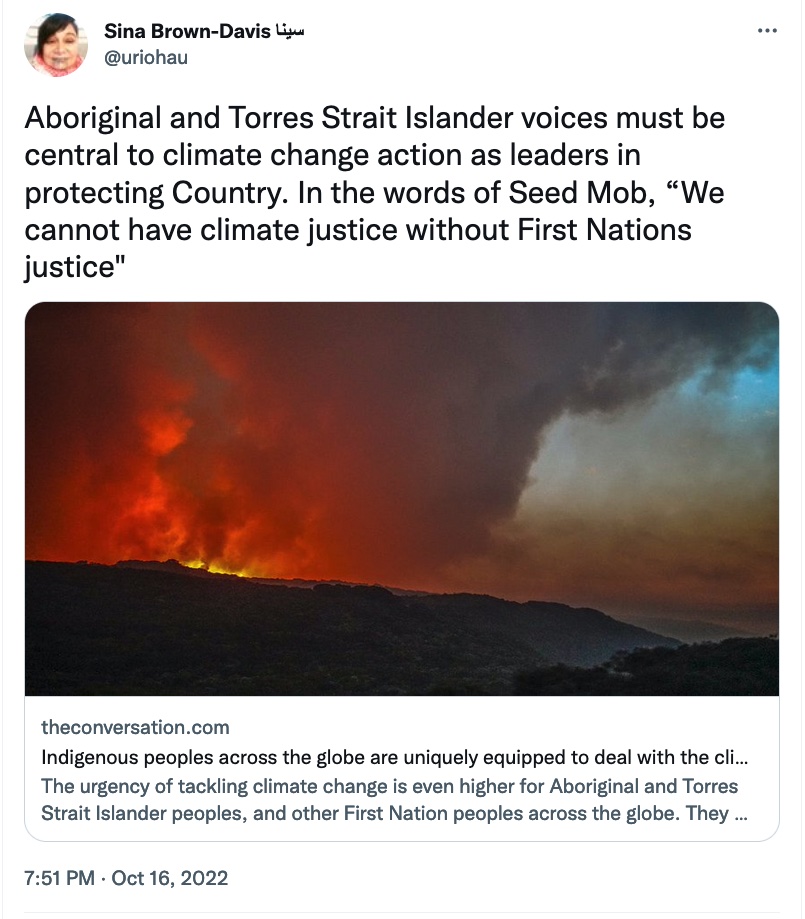 Climate change is a source of concern and anxiety for many Australians. While many community radio stations are stuck in a deficit approach – concerned they don’t know enough or can’t do enough – others take a more empowering approach.

Many stations do this by leading by example: moving to solar power, composting in the station kitchen, and even making their own sanitising wipes. Another station had a project highlighting the efforts of everyday people in their community to adapt to and mitigate climate change impacts.

It doesn’t necessarily take a panel of scientists (or academics!) to enable these actions. Instead, reframing who is an “expert” can be a valuable and empowering approach when talking about local climate change impacts.

Community radio has a lot of potential to play a lead role in supporting community resilience to climate change. While great work is already being done at stations across the country, many stations lack the confidence and resources to do more.

Further work and investment in this area will create a wealth of opportunities for local communities to voice their own stories of climate action that point to hope, empowerment and possibility.

See Croakey’s archive of article on media and health matters

PrevPreviousIn planning for the 2026 Census, what can Australia learn from overseas?
NextAmid calls for “billionaire-busting policies” globally, these national consultations could help address health inequalitiesNext