Wonky Health asks: Who are you prepared to sacrifice to climate change?

The health sector must keep talking about the dangers of climate change and highlighting the wide-ranging risks, according to Wonky Health columnist Dr Tim Senior.

The aged, children, big-city residents, and the poor are among the groups most at risk of the health impacts of climate change, but no-one is immune, he warns.

I shouldn’t have to write this post. Even after the recent G20, where our government’s efforts to keep climate change off the agenda failed spectacularly, the obvious still needs saying often and loudly.

Destroying our climate destroys our health.

It’s been discussed frequently in the medical literature; the Lancet has had a special commission; in Australia, it’s been a focus of the Climate Commission, and the formation of the Climate and Health Alliance and Doctors for the Environment Australia. Croakey has been covering this for a while.

There’s even a brand new book just published on climate change and global health (which I’m using as some of the sources here).

So why write about it?

Because it still needs saying. It’s not often spoken about in health circles, apart from a few cranks like me.

It’s become a depressingly stupid debate in Australia about the price of electricity, rather than about keeping our only home habitable. And, perhaps worst of all, we have a Government that is clearly not interested in taking any action on this, indeed, they seem to be rushing headlong in the opposite direction.

Health, though, is valued by people. Any project that looks like it will pollute our air or poison our drinking water will meet with strong resistance. It is easy to understand the anger that arises when fracking threatens our water supplies or agriculture, or when a mine fire burns for weeks, making it unsafe for children to play outside.

Even those who don’t like wind farms know that attributing every conceivable health problem to wind farms can scare people.

The only way to maintain the extraction and use of fossil fuels is to choose someone and somewhere to sacrifice.

“Sacrifice zones” is the memorable term popularised by Naomi Klein in her new book, This Changes Everything. (And if you haven’t read this book yet, stop reading me now, and go and buy a copy. I’ll wait….).

Most of the sacrifice zones involve less powerful or vulnerable populations away from population centres, but this becomes harder and harder, such that now even Andrew Forrest, presumably happy to dig where he is not, objects to living in a potential sacrifice zone.

If we’re really not willing to act properly on climate change – which means cutting fossil fuel emissions to zero by 2100 according to the IPCC – then who and where are we willing to sacrifice?

Wide-ranging risks
The risks affect everybody, but they aren’t evenly spread. Are we willing to sacrifice people to the direct effects of heat extremes? The elderly and children are particularly vulnerable to both heat waves and cold snaps. Neither of these groups would be electorally popular groups to sacrifice!

The heat sink effects of cities makes urban rather than rural populations suffer more in heat waves, and there is evidence of poverty making people more vulnerable because of problems affording air conditioning in summer and heating in winter.

Much less predictable is where your sacrifice zones will be when disasters hit. Climate change results in more frequent cyclones and hurricanes, hail, bushfires, and floods. Many of these will occur mostly near coastal areas.

The health system will be at the forefront of any response to disasters, and good preparedness can hugely mitigate the effect of any individual disaster. However, if there is one thing that climate change teaches us, it is that we need to be prepared for complex combinations of causes and effect, with pre-existing vulnerability and combinations of events leading to unpredictable consequences.

The impact of disasters on infrastructure and health programs can have a huge impact on the ability to prepare for and manage health risks due to changes in the climate.

Secondary health effects of climate change result from changes in the distribution and lifecycle of mosquitoes, ticks and other animal hosts of diseases. These include conditions like malaria, dengue, lyme disease, and parasites. The changes, though are complex – you don’t get to choose your sacrifice zones, some areas will be better off, some worse.

Perhaps more pertinent in Australia is the evidence emerging that climate change will have an effect on allergies due to differing levels of pollen. It may sound trivial, but allergies can have a profound effect on quality of life and productivity. Combine this with air quality, too, and you have more respiratory problems, especially asthma, and I’m sure I’ve already started seeing patients with asthma worsened by weather patterns.

Impacts on our food supply
There’s a third set of consequences from the effects of climate change on food production – plants, animals and fish. Drought, floods, cyclones and ocean acidification will all affect these in complex ways, though we already know enough about the health effects of malnutrition.

Natural disasters will affect food prices (Remember the price of bananas after cyclone Yasi?) but so will decisions we make to mitigate the other effects of climate change, such as growing biofuels.

As people across the world struggle to afford food, or to grow their own, we’ll see more headlines about Melburnians concerned about the price of coffee, which doesn’t really count as part of the real food security problem in Australia.

Describing pre-colonisation Australia as “nothing but bush” manages not only to be wrong and offensive about Australia’s Aboriginal and Torres Strait Islander history, but betrays the thinking that pristine bush has no value and needs to be removed for development.

There is nothing we can do in life that doesn’t depend on the planet as our life support system in some way (and shown by the relation of a healthy environment to mental health). It doesn’t matter where you are on the political spectrum.

If you eat food, drink water and breathe air, you depend on the environment. If you believe that lack of equality causes social and economic problems, that depends on sharing environmental resources fairly. If you believe in giving business certainty, then you could do without floods, fires, and cyclones. If you believe in low taxes and small government, then Garnaut and Stern tell us we need to act on climate change as soon as possible. If you support our armed forces, if you want less conflict in the world, if you want insurance to remain a viable business, then you’ll need to advocate for action.

Action? Of course, action means taking whatever steps possible to reduce the emissions of greenhouse gases. Those of us concerned about health must continue talking about this, in the same way that we advocate for other policies that keep people healthy, such as tobacco control and junk food.

We need to be more physically active – which means walking and cycling and using public transport more. We need to eat food that is less processed, and from closer to home – which means less fossil used in its production and transport. We need buildings that need less power to run heating and cooling, which also results in less respiratory disease.

Effectively, the health consequences we see of our current lifestyle is that of substituting and supplementing our own energy with that of fossil fuel – in food, in transport in energy and in waste. In the current system, that is how we keep creating profit.

Currently, our economy only works if eventually we all agree to live in sacrifice zones, to be sacrifice zones. I am more optimistic than I’ve been in a while. Our Government was isolated on the issue at the G20, and need to say soon what their future carbon dioxide reduction targets will be (and how Direct Action could possibly get there).

Pressure is mounting globally for action, which will only be heightened in Australia by another angry summer. Average temperatures and CO2 are hard to imagine, but health isn’t. People do care about their health and the health of those they love.

That’s why the most important action the health sector can take is to keep talking about the damage we’re doing to the climate and how we can prevent this. This is not about electricity prices or tax rises or markets.

This is about who and where you are prepared to sacrifice first to maintain a way of life that will eventually get us all. And that, we certainly should talk about. 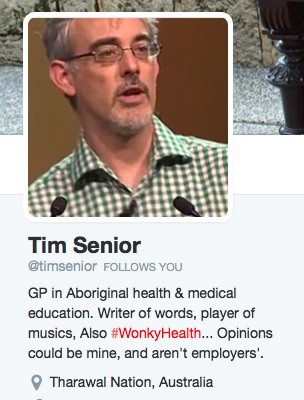 • The Climate and Health Alliance and the School of Public Health and Community Medicine at UNSW are presenting a free public lecture on in Sydney on November 25: “Protecting health from climate change: what’s needed?”. More details are here.

• The Australasian College for Emergency Medicine is presenting a free public lecture on the health impacts of climate change, in Melbourne on December 8. More details are here.

PrevPrevious“Do not turn our people into fringe dwellers once again”: Fitzroy Crossing groups on threats to close WA remote communities
Next10 tips for using social media to promote health: reflections from Fertility WeekNext