Wonky Health has found new jobs for Tony Abbott, Joe Hockey and some of their Ministerial colleagues

Inspired public health leadership is hardly the hallmark of the Abbott Government. But if the Government wanted a “complete health makeover” (and even some of its own MPs seem to favour this), then Dr Tim Senior has some ideas for a political revolution – to be lead by a Prime Minister for Health.

His latest Wonky Health column, outlining a whole new way of conceptualising the Federal Ministry, exemplifies his call for more imaginative approaches about how we might do policy differently “and not be bound to a narrow conception of government as managers of an economy, and ourselves as consumers”.

If I’ve sounded a bit grumpy over the last eight months or so at Wonky Health, this might reflect the number of unpleasant policy surprises that have been sprung upon us.

Before the Federal election, I had thought there was a unity ticket on Gonski, and I had looked closely at the Liberal’s Health policy before the election. In short, I was expecting a range of policies, some with a beneficial effect on health, some not.

Then the budget came along. Without warning, there were suddenly co-payments, university deregulation, the abolition of GPET, a mining magnate’s report on Indigenous disadvantage, and a general encouragement of increasing inequality. That’s a lot of policy with potentially poor health outcomes.

But there are alternatives, if we imagine them. They can be difficult for politicians to grasp, but there are examples of policy that promotes health. South Australia is leading the way with their Health in All Policies approach.

Another attempt at a similar idea was the Wellbeing Manifesto. The WHO has given guidance for governments on tackling these, led by Professor Sir Michael Marmot, the British public health physician.

Famously, during a visit to Sweden, Marmot asked the Swedish Prime Minister, “Who is your health minister.” “We are all health ministers,” came the reply.

In this spirit, let’s wonder what would happen if all our current cabinet ministers were health ministers. (I’m using current ministers as examples, but if they were really promoting health, we might see a bit more diversity in the cabinet – perhaps as a result of a reshuffle coming soon).

The Health Services Minister
Sussan Ley’s role would be renamed “The Health Services Minister” and would be responsible for organising the health system to get the best health outcomes for users of the service (and one of her KPIs would be making the services accessible for those who would benefit from using them, but don’t). She would get no extra marks for making the service cheaper if it didn’t also improve health. That is not what sustainable means!

Minister for Health (Environment)
Greg Hunt would primarily be responsible for ensuring that Australia worked to prevent climate change, and brought other countries along with them, too, emphasising the likely devastating health effects. He would also ensure that other threats to health and the natural environment were minimised, and that everyone had access to areas of natural bushland.

Minister for Health (Economy and Funding)
Formerly known as the Treasurer, Joe Hockey would be responsible for monitoring and reporting on inequality as a key cause of poor health, a recommendation which could come from a recent Senate inquiry. The tax system would be measured on its fairness, and used to make it easier for people to make choices about their own lives, especially those whose lack of income normally prevents them making choices. He would ensure that everyone was paid a living wage.

Minister for Health (Law)
George Brandis would no longer be the Attorney General, partly to do away with confusing plurals. His responsibilities would be to ensure that everyone had the right not to be hounded by bigots, and that human rights (including a right to free speech) applied to everyone, not just those with newspaper columns or those rich enough to afford lawyers.

Minister for Health (Immigration)
Peter Dutton would have to ensure that those under his guardianship were treated in a way that was not detrimental to their future health. While this includes drowning at sea, it would also include death by murder, death by delays to routine medical treatment, and death by a life so awful it forces people to self-harm. He would promote inclusion of asylum seekers into Australian communities to improve everyone’s health. The Minister for Health (Law) would constantly be in his ear to prevent him from putting at risk community inclusion.

Minister for Health (Education)
Christopher Pyne would have responsibility for ensuring that all children were literate, and would engage families of all backgrounds in doing this. He would be responsible for ensuring especially that every child had the chance of a good education wherever they went to school, whatever their income, and that university was an option for them, if they wished.

Minister for Health (Employment)
Eric Abetz would devote his time to ensuring that all those capable of working were able to do so, and that they had secure employment. Those not in work would not be treated punitively, but helped to develop skills for both job-seeking and subsequent work. Adding to their stress through punitive measures and low income only causes ill health.

Some new ministers would also be created!

Minister for Health (Transport)
Nominations are open for this minister who will work with state counterparts to develop active forms of public transport. Roads would become clearer as more people moved to convenient, cheap, clean public transport and cycleways in all major cities and urban centres.

Minister for Health (Food)
There would be a dedicated minister for ensuring that everyone across the country had access to affordable, healthy food, and the means and knowledge to prepare it. This minister would have to think about health implications of policy, and would be specifically mandated to challenge big food companies to be transparent on their labelling. They may also want to consider price signals on unhealthy foods.

Minister for Health (Maternity and Early Childhood)
As this is where so many of the health gains are to be made, why not have a specific minister to co-ordinate policy across government? They would ensure there was support for mothers during pregnancy, in establishing breast feeding, and in pre-school literacy and education. This minister would have the power to influence other Health Ministers, such as Economy and Finance, Health Services and Education to ensure appropriate services were developed and funded.

Overseeing all of this would be the Prime Minister for Health, Tony Abbott, to ensure that the various other health ministers worked collaboratively with each other and with the States and Territories and local councils to improve the nation’s health.

It may be that this all over-emphasises health at the expense of other outcomes. But an understanding of health as not being merely an absence of disease (or the community focus of the Aboriginal definition of health) shows that health outcomes are a marker of a functioning community, one that we have measures for.

Surely if government are there to do anything, they are there to produce functioning communities, which produce healthy people as a by-product!

I don’t expect any of this to appear in the next budget. I don’t know how I’d implement it, or even pay for it in the short term (I think there would be longer term benefits on health expenditure and improved productivity, but that’s an arguable point.) ‘

What I do value is imagination – imagination about how we can do policy differently, and not be bound to a narrow conception of government as managers of an economy, and ourselves as consumers.

This is a starting point for ideas about new policy and new ways of administering policy. Because the alternative makes me and everyone else sick.

The ideas for these policies are all based on ideas and evidence from the following documents. None of the documents recommend implementing it in the way I’ve suggested!

The South Australian Model of Health in All Policies

Health in All Policies: Framework for Country Action (WHO)

And when you’ve read all of that, Evelyne de Leeuw puts the whole thing in a single tweet! 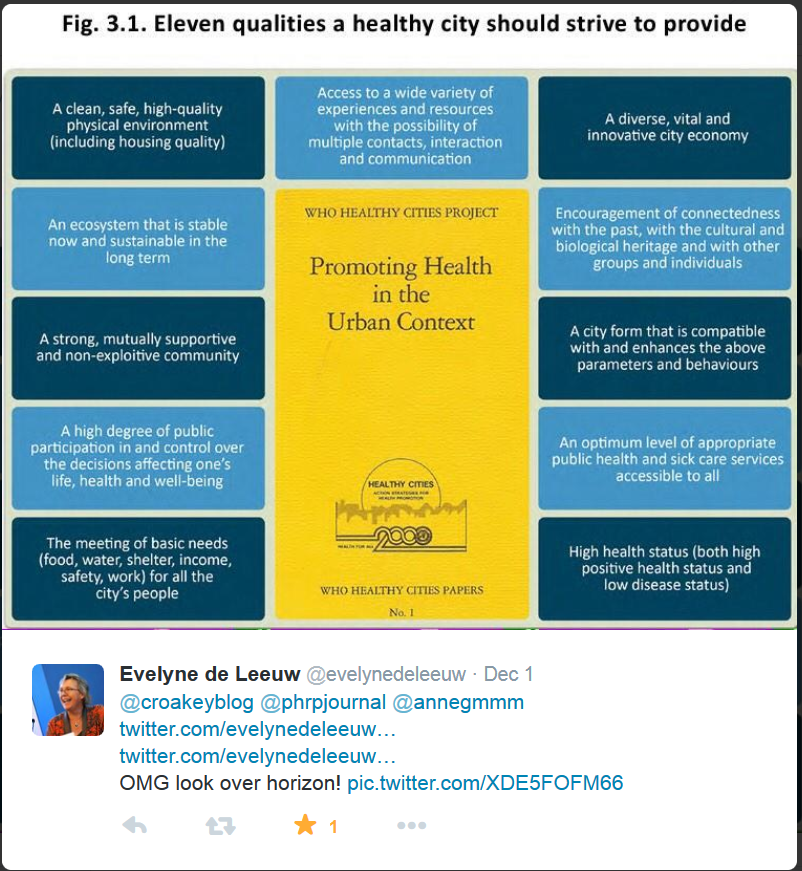 PrevPreviousQueensland Votes: Public health services do not start at the ED door
NextNew funding models are a long-term alternative to Medicare co-paymentsNext