The interests of cashed-up industries are routinely put ahead of our health.

That’s hardly “hold the front page” news for those in the public health field, so it’s perhaps surprising we don’t hear more public health advocates calling for action on systems of political governance, including political donations.

The malignant influence of cashed-up political donors is highlighted in a recent article by former independent MP Rob Oakeshott, who argues strongly for reform of the laws around donations to political parties.

“The commercial influence on public decision-making is more important than anything else right now. Australia is losing its future unless we change,” he wrote in The Saturday Paper.

So what pickings does Oakeshott’s new book, The Independent Member for Lyne, offer for those with an interest in public health advocacy?

Early in this political memoir, Rob Oakeshott describes seeing a book on Tony Abbott’s desk during the negotiations which will determine which party will get to form government after the 2010 election. “It is a book I remind myself I should read,” writes Oakeshott. “I suspect it holds some wisdoms that Abbott is relying on.”

It is in this spirit that I read The Independent Member for Lyne. Could this insider’s description of the 43rd Parliament of Australia hold some wisdoms about effective political advocacy, especially for someone naïve to the process like myself?

Rob Oakeshott, as you will remember, is one of the independent and cross-bench MPs who kept Julia Gillard’s Labor government in power from 2010 up to the 2013 election, and it’s impossible to read his memoir without the benefit of hindsight on current political personalities.

I’ll leave the political analysis to others – after all, it will be what most people read the book for. There are effective sideswipes at all sides of politics, all of which have the ring of truth about them, and leave one feeling a little disillusioned about party politics. 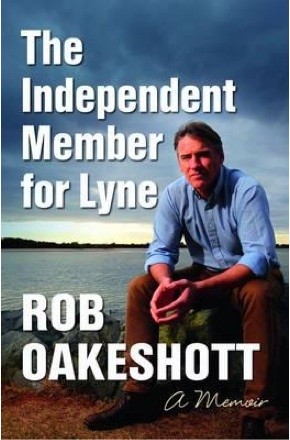 Oakeshott says towards the end of this book “I’m a policy wonk at heart. I like thinking about policy, but tire of the inevitable politics that comes with the territory.”

I was a little surprised to read this, because, with a few exceptions, much of this book is about the politics, rather than the policy – who discusses what with whom and why, the annoyances and loyalties that come with intense contact over time. In the end, the value that Oakeshott seems to appreciate most is the art of compromise. Both the Greens and Tony Abbott are derided on this.

I am being slightly unfair. The three policy areas Oakeshott is most committed to are Indigenous affairs, the National Broadband Network, and action on climate change. When he writes on these he is at his most knowledgeable and most interesting. It is these issues that have decided his allegiances, both with the National Party and on who to support in government.

Oakeshott is worth reading on Indigenous issues. One of the best sections is the appendix where he reprints the speech he made to parliament in Dunghutti language. Elsewhere he describes the process of discussion with local Elders that led to this, and describes often the importance of Indigenous languages. There’s also an interesting discussion on Noel Pearson’s arguments that reform on Indigenous affairs needs to come from the Conservative side of politics.

Oakeshott’s writing makes clear that much of his passion on Indigenous affairs is personal for him (he’s married to a Dunghutti woman, and the book is most emotionally engaging when he writes about his family).

In contrast, he emphasises that the importance of action on climate change comes from listening to, and understanding, scientific perspectives on the issue, and he is dismissive of those that don’t.

A recurring theme in the book is the concerted and co-ordinated lobbying by the rich and powerful. We meet James Packer ensuring his casino profits aren’t disadvantaged by government policy. We hear about the pressure applied by News Limited and shock jocks for decisions favouring money and power.

We discover the “Kochtopus” referring to the US Koch brothers using their influence across media, think tanks, academics and astroturfing to push their interests, especially against effective action on climate change.  (It’s worth noting on passing that GetUp are also not mentioned with any sympathy, either.)

What would an advocate for public health learn from reading Oakeshott?

Health as a topic is notable for its absence. Hospitals are mentioned a few times, once in a discussion on the potential risks of public-private partnerships in financing. The health consequences on the immediate health of schoolchildren in an area of coal mining are mentioned as part of Oakeshott’s decision. But that’s it.

Interestingly for the health sector, where health service provision in rural areas is a major part of  our thinking, one of the most prominent recent advocates for rural Australia has very little to say in this area. I don’t think that’s Oakeshott’s problem. I think that’s ours.

There are other areas of the book where the absence of discussion is instructive. Apart from the coal mining example mentioned above, health policy and health effects of other policies doesn’t get a look in. Broader consequences of policy areas go unmentioned – for example there’s strong advocacy for action on climate change, but I didn’t get the feeling of why we need to do this, apart from saying “the experts say so.” I think we’ll need more than that.

There’s the same in advocacy for improvements to the Pacific Highway, which just sort of needs doing. Big issues, such as marriage equality or constitutional recognition for Aboriginal and Torres Strait Islander Australians are needed to make Australia better.

I’d clearly agree, but would wish for the reasons to be clearly articulated. I didn’t hear any of the voices who would be affected by policy. Australia would be better, but this was quite abstract. The people we do meet in this book were mainly related to the work and lives of those closely involved with Oakeshott. He meets a lot of constituents, but we don’t get to hear from them or have a sense of how they might be affected by policy.

I don’t doubt for a minute that these positions are sincerely held and thought about by Oakeshott – indeed, he comes across as a man of integrity and thoughtfulness, who takes his role seriously.

For someone who calls one of his chapters “Questioning the norm,” the views come over as conventional (small-c) conservative. He takes a default market-based position on most issues, without tipping over into market fundamentalism. He takes a conventionally progressive view on social positions, such as inequality, and argues these well, especially on the ways lobbying occurs for the rich and powerful.

However, parts of the book are instructive in that there is no reflection on the way these inequalities come about. We hear about members of Oakeshott’s family and in-laws who “joined the world of politics in their own ways.” Several times, someone in a meeting is discussed in the context of relatives whom Oakeshott knows, or known about from university or school rivalries. These relationships, of course, disadvantage those more recently arrived in Australia, those without relatives in power, and those who haven’t formed networks with them at school and university.

You won’t find mention of that here – not because Oakeshott doesn’t care – I suspect he cares more than many – but because this is one of the ways Australia does business. This is not Oakeshott’s fault – he is merely reflecting mainstream Australian values, serving as a representative. I may be hoping in vain that someone who says they are “questioning the norm” would wonder about this.[1]

What are the lessons for those involved in health advocacy?

Rob Oakeshott comes over as someone who takes his role as an elected politician seriously, and wants to get policy ideas right. He’s not alone in this among our elected representatives, but the personal toll is significant.

However much they (or we) might like to think differently, Parliament probably does reflect a version of our national values, beneath all the spin and colour. (Reading about the binge drinking culture in the NSW Parliament, made me think that effective alcohol policy starts with a direct disadvantage right there.)

In explaining and advocating for health policy, and particularly in public health, we need to start from scratch – assume no knowledge – and make clear the effects on their constituents, their friends and their family.

There are plenty of reasons to read The Independent Member for Lyne, but if you want to learn about effective health advocacy, read it with one eye on what isn’t there, as much for what is.

[1] Perhaps more insidious is that someone arguing in favour of marriage equality is still able to thematically group same-sex marriage and the Royal Commission into child sex abuse. He genuinely doesn’t conflate these as being linked, it’s just that in a book organised in chapters grouped by policy area, I found this conjunction jarring. Elsewhere, Oakeshott writes “I kissed Tim Mathieson [Julia Gillard’s partner] last night” which shouldn’t need to be followed up by “Relax, it was just a peck on the cheek; nothing more.”

•  Tim Senior and Croakey thank and acknowledge all those who contributed to the crowd-funding campaign to support Wonky Health – more details here.

PrevPreviousHealth impacts of climate change: time for health professionals to heat up the debate
NextIt’s about the wellbeing of all of us, not just doctors: concerns re AMA copayment dealNext