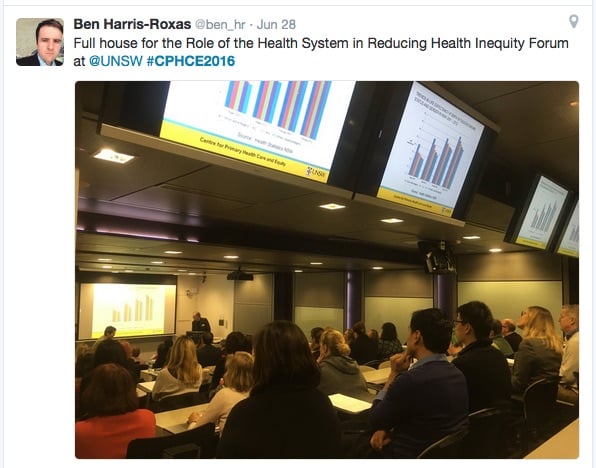 Thanks to the tweeters...

Work in health? Experts urge you to question your biases and to challenge unfairness (and don’t forget to vote)

A timely forum has put the spotlight on the importance of the health system taking a leadership role in addressing inequalities.

Journalist Amy Coopes covered the conference for the Croakey Conference News Service. Beneath her article are video interviews with three of the key speakers, as well as a selection of #CPHCE2016 tweets.

As disparities widen between Australia’s richest and poorest, and political tumult rages in Britain along education and class lines, leading experts came together in Sydney this week for some soul-searching on how the health system contributes to inequity and can do more to serve the most vulnerable.

With Australia’s federal election just a few days away and Europe reeling from Britain’s decision to leave the EU, the Centre for Primary Health Care and Equity’s The Role of the Health System in Reducing Health Inequity  had a decidedly political flavour.

The British experience: from Blair to Brexit

Professor Don Nutbeam, Tony Blair’s head of public health from 2000-2003, shared his experiences in Britain of a health-in-all-policies push to reduce inequities in health.

The major lesson from the UK experience, he said, was that any decisions in health ought to improve outcomes for the poorest fastest, and that measures to boost overall health may have no benefit for the most vulnerable populations.

One of Blair’s first acts was to commission the Acheson report into health inequalities, and this was followed by an ambitious 10-department action plan Saving Lives: Our Healthier Nation.

Headline-grabbing data from the time showed startling disparities by geography, with 9 stops along the Jubilee line from Westminster to West Ham equivalent to 9 years of life lost.

The blueprint had four overarching themes:

Critical to the plan’s success had been health’s leadership by example, walking the talk through a focus, as Britain’s largest employer, on local partnerships, jobs and supply contracts, as well as the close involvement of Treasury at every step of the way, said Nutbeam.

One of the major triumphs that had endured to this day was to elevate the status of prevention and primary care within the NHS, he said, with heavy investment in smoking cessation, nutrition of families with children, and exercise programs, as well as measures to reduce fuel poverty.

“By ensuring that investment in the NHS was related to need and by focusing attention on ways which we could use investment to improve the health of the poorest fastest, I actually think that’s been a change that’s long-lasting,” he added.

While there was still a strong focus within the health department on tackling inequality he said it would be naïve to suggest the issue was getting anywhere near as much attention in the current climate.

Instead, disparities endured, with many commentators (including Dr Richard Horton in The Lancet) pointing to stark generational, class and income fault-lines in last week’s #Brexit vote.

Nutbeam said the referendum revealed a “strength of feeling and level of concern about a range of issues” in the population that had been badly misread by Britain’s political class.

“A lot of people are feeling disenfranchised, frustrated, disempowered, and saw an opportunity to express that to politicians,” Nutbeam told Croakey.

“In democracies people eventually find a way of expressing some of their sense of disempowerment and frustration and I think the Brexit vote was one of those momentous occasions.”

While he expressed “ambivalence” on any direct impacts to Britain’s health system from exiting the EU, Nutbeam said there would be consequences from any significant long-term economic fallout.

“Undoubtedly it will be the poorest in society who will be most vulnerable to a sustained economic downturn in the UK, and as we know that will have an impact on health.” 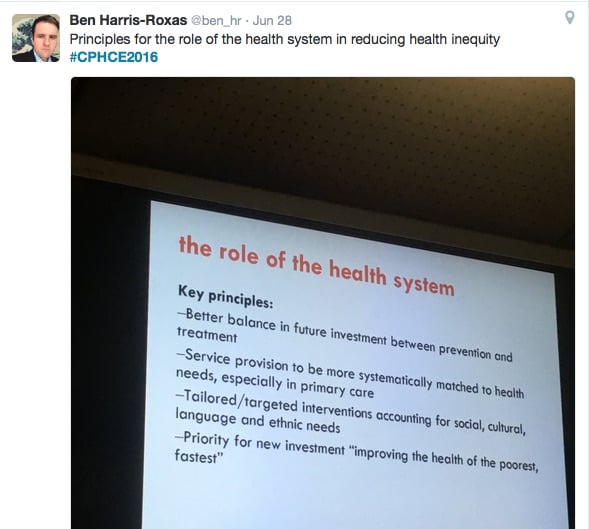 (At the bottom of this post, watch a video interview with Professor Don Nutbeam).

Lessons for Australia ahead of #HealthElection16

Professor Mark Harris, executive director of the CPHCE, presented NSW data showing that, while life expectancy was increasing, the gradient between richest and poorest was getting more steep.

Importantly for health professionals, said Harris, new research had shown that at least 50 percent of these disparities were attributable to access to services and other factors over which the health system had a direct influence or mandate.

Dr Marlene Kong, from UNSW’s Kirby Institute, told delegates that Aboriginal people were disproportionately affected by social, economic and environmental factors, with some 70 percent of the determinants out of their control, and access a growing issue due to escalating costs of living and time poverty, cultural incompetence and racism.

The CPHCE’s Associate Professor Marilyn Wise reflected on this, presenting the social determinants of health as a political construct of the health system that, in and of itself, had the power to exclude the vulnerable by guiding collective decisions about priorities.

She said implicit biases, whether inherent or imparted in medical training, contributed to inequity, and this fed into institutional biases.

“We make choices about what the social determinants of health are, how resources are distributed and by what mechanism,” said Wise, pointing to voting, government institutions such as the health system and the free market as key examples.

“Non-material” factors often got lost in the debate, but were critical in an understanding of equity, she said, pointing to freedom from humiliation and disrespect, stigma, indignity, denigration and stereotyping as important elements.

Whether personal (autonomy and agency) or political (presence and ideas), Wise said power was also an essential ingredient. Just as important as those at the table talking about what they could do better, was to recognise those who were not at the table at all, she added.

Wise said it was time to rethink the ‘equality’ model of health care provision, where the same services are provided for all in a bid to do the best for the greatest number, and where effort decreases exponentially to reach those as the most distant margins.

Professor Peter Sainsbury, outgoing director of population health in the South Western Sydney and Sydney Local Health Districts, launched a passionate defence of Medicare as a great leveller and pillar of equity, covering 84 percent of GP attendances in 2014-15.

“Medicare has been a phenomenal initiative,” Sainsbury told the forum. “Do not get taken in by liars and the ignorant who say it was set up as a safety net for the poorest.

“Medicare depends on the middle class paying for it and accessing it for it to work as a universal service.”

He urged those present to recognise that targeting society’s most disadvantaged groups was not the same as tackling the determinants, but merely a band-aid measure once the damage had been done.

Rather than a model of health serving those who knocked at our door, Sainsbury said the system needed to radically rearrange the way it did business.

The only way to truly tackle the social gradient in health would be to abolish both extremes of wealth – the very rich and very poor – not a prospect that could be sold to the electorate, he acknowledged, when “the social determinants aren’t harmful if you live in (the Prime Minister’s electorate of) Wentworth, they’re good for your health.”

Equity in action: Australia and abroad

Sarah Simpson, author of a landmark paper on health equity initiatives in Europe, told the forum there was great scope for the health system to make advances within its own backyard.

Ensuring universal access, relevance and quality of care; that services did not alienate, marginalise or stigmatise; that people felt connected to the system, and that prevention and community collaboration was recognised in funding models were important principles, she said.

“We can hardly interact with other sectors and ask them to do more, to do something, to do better with our communities if we haven’t got our own house in order,” she said.

Were she Prime Minister for a day, Simpson said she would implement an equity-focused performance assessment of Australia’s health system similar to this one done in Portugal. (At the bottom of this article, watch a video interview with Sarah Simpson). 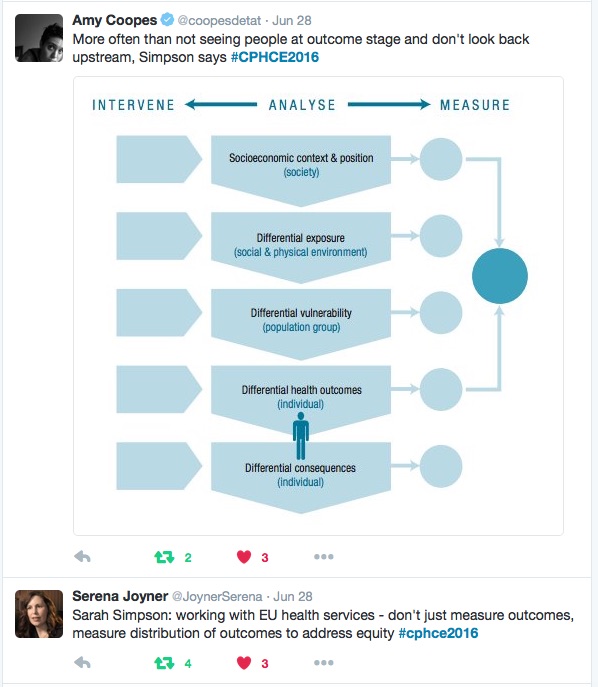 According to Gerry Marr, chief executive of the South East Sydney Local Health District, one of the most powerful things that could be done was to shift the thinking in health from: “What’s the matter” to “What matters to you?”

Until patients and communities were seen as assets rather than problems, equity would remain out of reach, he added. This meant engaging with vulnerable populations in a way that was not paternalistic and reinforced divisions.

Marr also called for a fundamental rethink of fee-for-service and activity-based funding, and said it was time to recognise that “the 6-minute GP visit is over and we must reform the way we go about primary care.”

Mark Harris said a social gradient had been demonstrated in the length of GP consultations, with those living in poorer areas getting less time with a doctor due to workforce shortages and remuneration, and this was likely to be exacerbated by moves towards a co-payment model.

Procurement, employment, skills and training were all practical ways in which health, as Australia’s largest employer, could play a part in boosting equity from within, said Nutbeam.

Two initiatives, Hospital in the Home and Can Get Health Canterbury, presented their work to the forum as examples of equity in practice, and CPHCE hopes to collate a database in coming months of other such projects from across Australia (so if you have one, please get in touch!).

GP, Dr Tim Senior, proposed the Aboriginal Community Controlled Health Service model as an excellent starting point for thinking about meaningful reform, and said the Aboriginal definition of health also had a lot to offer in equity debates.

Procurement, employment, skills and training were all practical ways in which health, as Australia’s largest employer, could play a part in boosting equity, said Nutbeam.

It was time to start thinking politically about health and recognising the role of power and those who have a say in how the world works, said de Leeuw.

She urged delegates to question their own biases and challenge unfairness and inequity wherever it was encountered, to “go and kick some butts”.

Proceedings closed with a quote from Rudolf Virchow, one of the great pioneering physicians: “Medicine is a social science, and politics is nothing else but medicine on a large scale.”

(He continued: “Medicine as a social science, as the science of human beings, has the obligation to point out problems and attempt their theoretical solution; the politician, the practical anthropologist, must find the means for their actual solution.”)

So cast your ballots wisely…

Cassandra Goldie, CEO of the Australian Council of Social Service, talks of the importance of stories and “human connections” – in addition to evidence – in engaging policy makers and politicians in action on inequality.

Sarah Simpson, an expert on addressing health inequality through health systems, describes some successful case studies from Norway, Slovenia and Spain. She also suggests that a sense of disenfranchisement – encouraged by issues such as the unaffordability of housing – can create barriers to action on inequalities.

Professor Don Nutbeam says the health system must provide leadership and champion action to address inequities, including putting a strong emphasis on strengthening primary care, especially in under-served communities with poorer access and poorer quality care. There must be deliberate action and investment to tackle inequalities, he says. 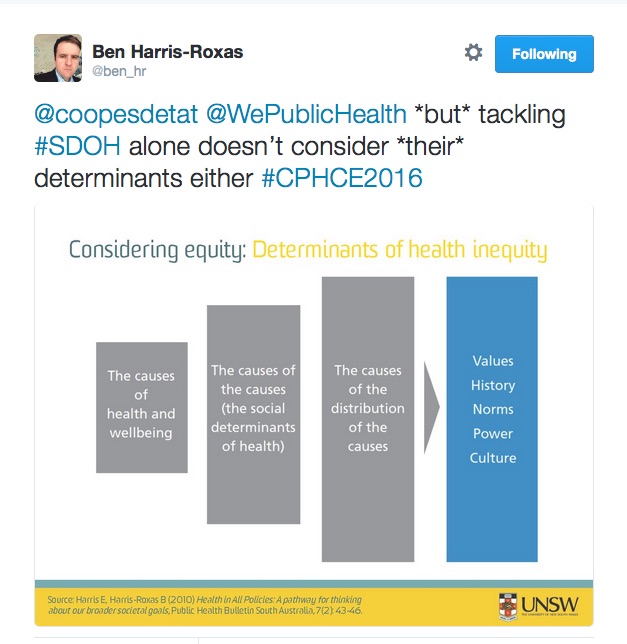 On the need for political engagement and action… 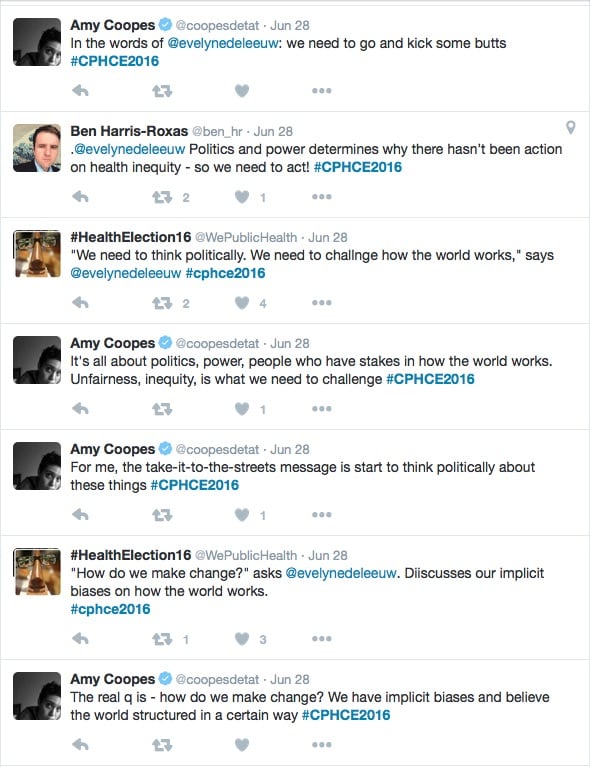 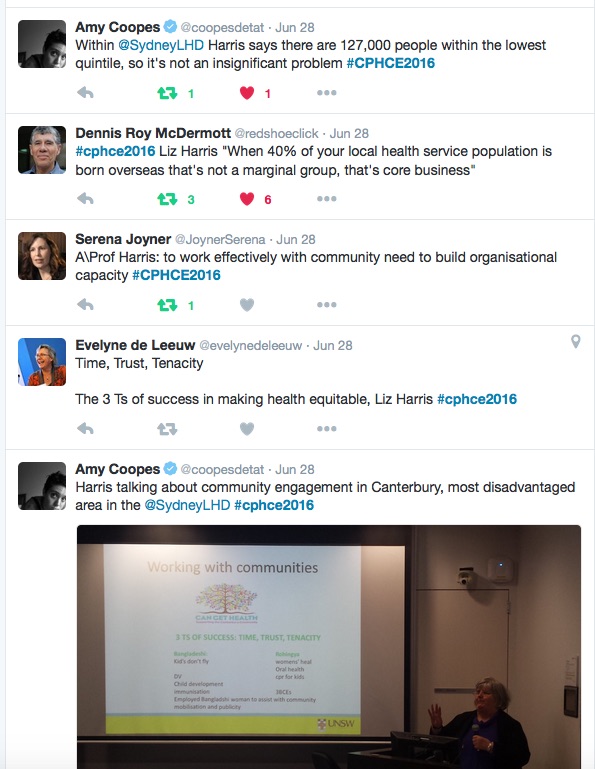 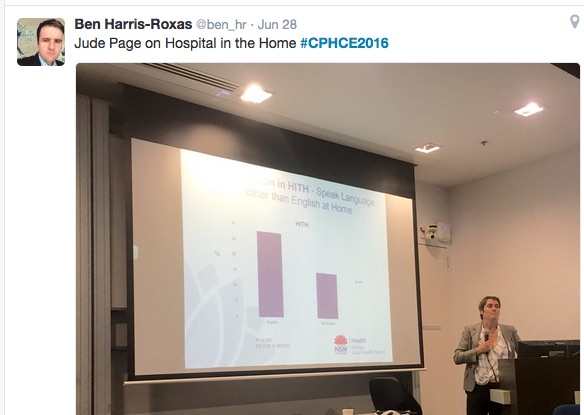 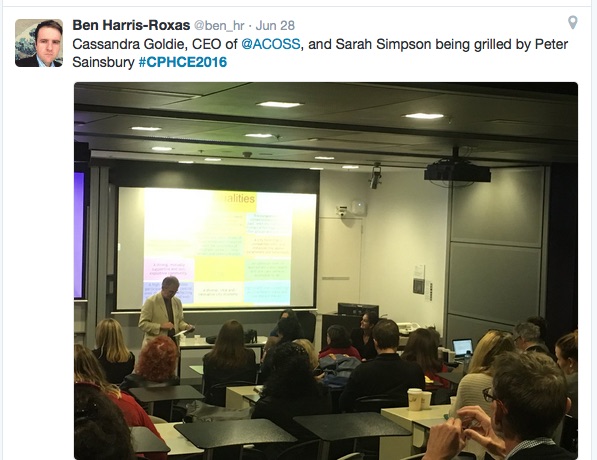 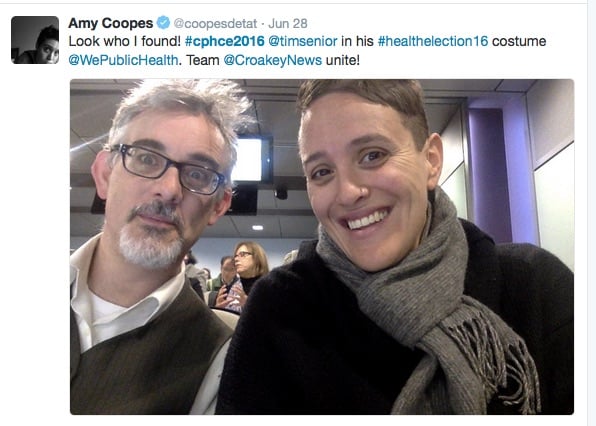 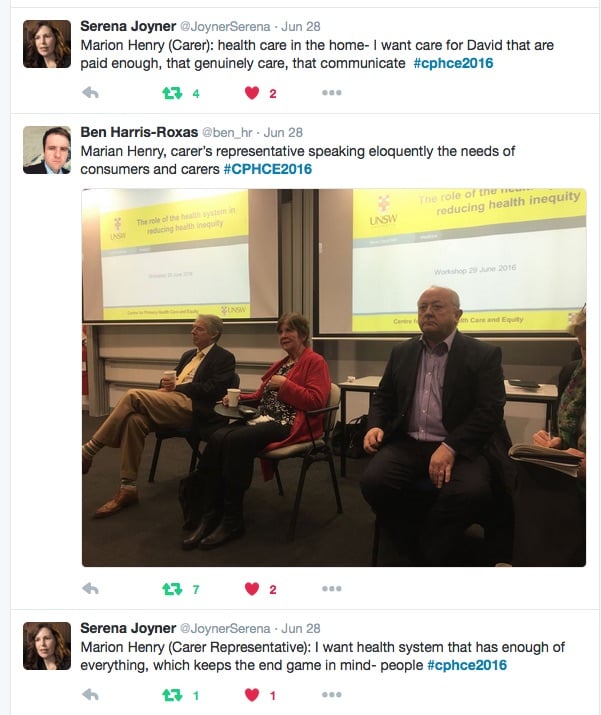 Thanks to all tweeters for helping to share the news and to get health equity trending.. 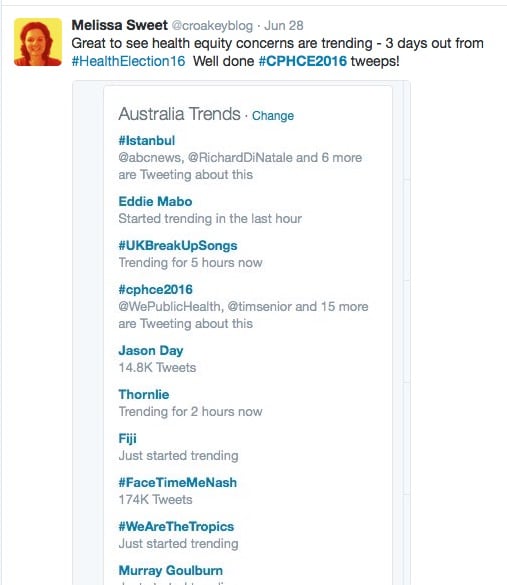 Here you can read the Twitter transcript – analytics are below. 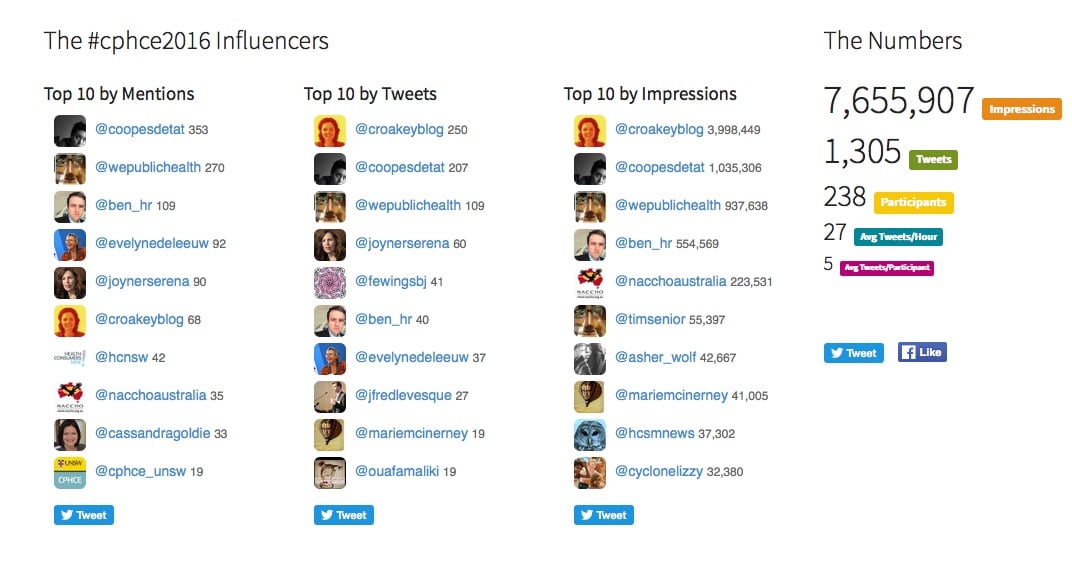