Home Indigenous health Worth talking about: the good news in Aboriginal health – and some stunning photographs

Worth talking about: the good news in Aboriginal health – and some stunning photographs

The National Rural Health Conference in Adelaide today heard a fabulous good news story from Stewart Roper, of Nganampa Health Council in Alice Springs. He told about health and welfare achievements in a remote community in the APY Lands of northern South Australia.

He showed some beautiful photographs that form part of a book, which he has published that was launched at the conference. Both the book and his story make an important point. So often our images and stories only focus on the most dire health and social problems that sometimes afflict remote Aboriginal communities – which doesn’t tell the whole story and can generate disillusionment.

Having worked in the Amata community about 100km from Uluru over a long period, Stewart was able to highlight some of the noteworthy Aboriginal–controlled organisations and significant achievements.

The Pitjantjatjara Council was formed in Amata in 1976 to fight for land rights and saw freehold title granted in 1981. The Council has been responsible for delivering other vital services in a challenging setting.

The Ngaanyatjara Pitjantjatjara Yankunytjatjara Women’s Council has supported families and communities since it was formed in 1980 and continues to be involved in programs that improve child nutrition, combat domestic violence, alcohol and drug abuse and support community-based initiatives.  No mean feat.

Then there’s the Nganampa Health Council, also formed in 1980, which has improved health and living conditions on the APY lands and seen a dramatic reduction in infant mortality and infectious diseases.

Stewart talked about how it’s now rare to see kids petrol sniffing, which is different from the eighties when there were up to 60 kids sniffing.

These amazing achievements are worth talking about.

While chronic disease-related factors like smoking, high levels of alcohol, poor diet and inadequate exercise are big issues, Stewart said these issues are not confined to Indigenous people. The solutions are more difficult when good food is five times more expensive and it’s close to impossible to exercise in sweltering heat where there are no air-con gyms.

So while governments and policy makers need to know there are still significant and very complex problems in remote Aboriginal communities, Stewart’s presentation was an important reminder that there are some amazing and justifiably proud people living in communities.

• Stewart’s book Palya: Pitjantjatjara Yankunytjatjara Country uses images and recollections to show the spirit of the people and the beauty of their country.

And below are some tweet-pix from the presentation: 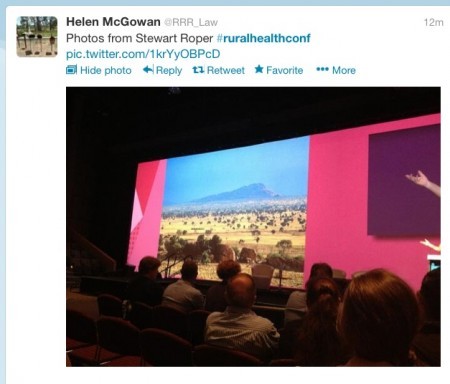 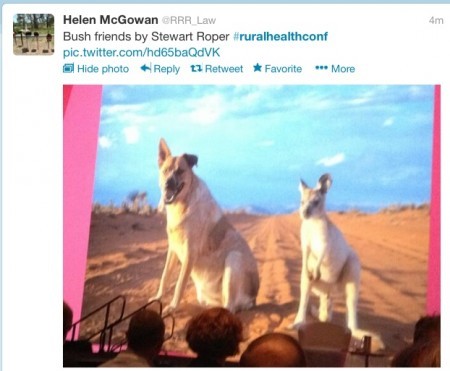