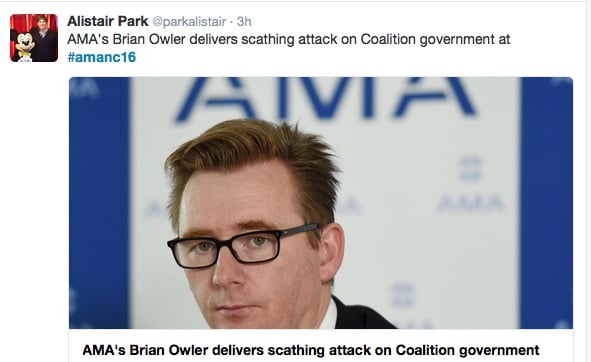 As the outgoing AMA president Associate Professor Brian Owler launched a withering attack today on the Abbott/Turnbull Government’s record on health, there were a number of developments on the #HealthElection16 hustings.

Owler told the AMA’s national conference in Canberra that he felt disappointed that the last two years had been a period of lost opportunity in health policy, and said the Government’s approach was characterised by a lack of vision and consultation.

Some significant promises from Labor and the Greens are summarised below, with links to further reading – and you can read more from Owler’s speech at the end of this post. 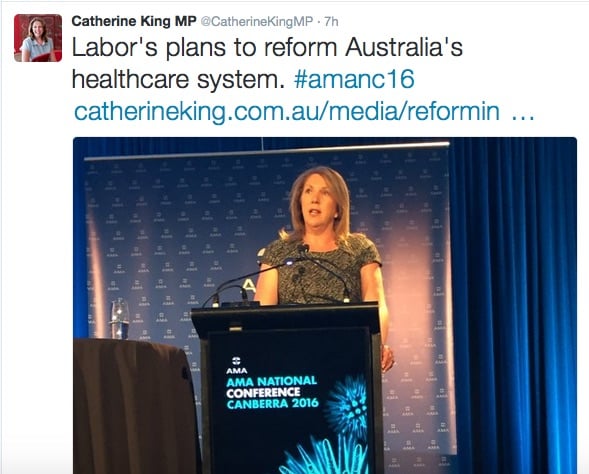 She said the Australian Healthcare Reform Commission would focus on preserving universality, reducing inequality, eliminating waste and duplication, integrating services and improving the collection and use of data.

(Notably, she didn’t put much focus on its role in public health, apart from saying that it would incorporate the work of the former Australian National Preventive Health Agency.)

The Commission would report to the Council of Australian Governments through the Standing Council on Health, and would be created through the consolidation of existing agencies and resources from the Department of Health.

She said it would take on the reform roles of several agencies abolished or downgraded by this Government, including:

The Australian Commission on Safety and Quality in Health Care would also be rolled into the Commission, which would also include a new Centre for Medicare and Healthcare System Innovation.

This Centre would develop, trial, evaluate and implement new payment and service delivery models that both aim to reduce health expenditure while rewarding and improving the quality and safety of care.  The Centre will include the functions of the current MBS Review; any savings from this review will be invested into new models of care.

Greens back investment in primary care

Also at the AMA conference, Senator Richard di Natale announced the Greens would invest an extra $4.3 billion into primary care over four years, on top of the existing money currently spent on chronic disease management. 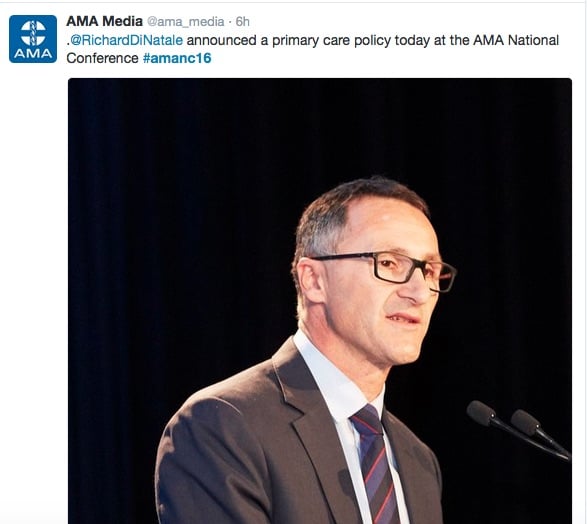 The Greens would introduce a ‘blended’ payment system to complement fee-for-service. Voluntarily enrolled patients with chronic diseases will each attract a $1000 payment for their chosen general practice, to incentivise and reward GPs for the time they spend on chronic disease management.

The Greens would also commit to $2.8 billion in new funding to bring allied health into the public system, and $11.9 million for the development of a national standards framework for the treatment of chronic disease. Read more here.

The Greens also launched plans for increased spending on palliative care and related research, the development of nationally consistent model legislation for advanced care planning, and $10 million for a national awareness campaign. These announcements were welcomed by Palliative Care Australia.

He foreshadowed there were more announcements to come on prevention, and stressed that health spending should be seen as an investment, rather than a cost.

The AHHA also applauded the Greens’ plan to improve data collection across the primary health system to better monitor and assess patient outcomes, and welcomed the Greens’ pledge to commit to sustainable public hospital funding and affordable, equitable healthcare.

Verhoeven said: “The Greens’ pledge to restore the public hospital funding model wherein the Commonwealth, states and territories share the rising costs in delivering hospital services aligns with what AHHA has advocated for. We also welcome the proposed increase in Commonwealth funding to 50% of efficient growth from the next Budget cycle.”

“The Commonwealth spends billions of dollars annually on the PHI rebate, and it is prudent to ask if these funds should be reallocated to parts of the healthcare system in greater need. The Greens’ commitment to redirect funding saved from phasing out the PHI rebate into public healthcare is a welcome one.”

As Labor pledged to double the number of Indigenous rangers, the Government focused on support for Indigenous entrepeneurs.

Meanwhile, Labor said it would provide $5.5 million a year for four years to roll out the successful Deadly Choices health promotion program across the country, working in partnership with the Institute of Urban Indigenous Health (IUIH).

The program is a school and community based chronic disease prevention and education initiative aimed at Aboriginal and Torres Strait Islander people aged 10 years and over.

NACCHO welcomed Labor’s Indigenous health announcements as a “good start” but said more was needed to tackle the huge gaps in health equality.

NACCHO Chairperson Matthew Cooke said a National Strategy was needed, with multi-partisan support from every level of Government, that is adequately funded and works in partnership with elected Aboriginal leadership from grassroots communities and other key representatives to focus on redressing the Social Determinants of Health.

It is fantastic to see Labor commit to improving the health of Aboriginal and Torres Strait Islander people; however, we need to see the fine detail.

If we are to make serious headway, we need to see a holistic approach developed in partnership with Aboriginal and Torres Strait Islander people which includes a national focus on over-incarceration, mental health, child removals, housing and health prevention. We can not make a significant dent in health outcomes gap by dealing with these issues one at at time.

We know too many of our people suffer from mental health issues which are often undiagnosed or untreated. There needs to be a greater investment in community-based culturally appropriate services. Improved mental health will only have a positive impact on all aspects of our lives.

In addition to the health promotion messages delivered under Deadly Choices, there also needs to be a focus on a nutrition policy which looks at food security and affordability. Nutrition has been significantly neglected by all parties.

Too many of our children end up in out of home care. The impacts of child removal have been seen with the Stolen Generation we need early intervention services available so we can support families before children are removed.

Housing affordability and social housing needs a national approach. Overcrowding and homelessness put our people’s health at risk and yet there is no national policy to address these issues. In addition to a holistic approach there needs to be long term funding commitment where the policies are bipartisan.

Funding needs to include evaluation so we can learn what is working, why and how we can improve. There are no easy solutions or quick fixes. We now need to see a commitment from the Coalition.”

Below is an edited extract of Owler’s final Presidential address, ahead of AMA elections on Sunday.

“As confirmed by the Minister herself this week, the health portfolio is not run by the Minister for Health. It is run by Treasury and Finance. This is something that I have been saying for two years.

The Medicare freeze is affecting not only the viability of general practice, especially in those low income and disadvantaged areas, it punished all those people who already pay a fee, as their rebate is frozen too.

It is bad for Indigenous health provision including the Aboriginal health services that are dependent on the rebate from bulk-billing.

It affects immunisation rates for children, as parents with multiple children defer seeing their GP.

The history of the last two years shows that the Government does have a problem when it comes to health policy.

The failures of this Government are of their own making – a failure to consult with genuine intent, a failure to listen.

Most obviously to me, the problems in health are as a result of the triumph of short-term fiscal measures over long-term policy vision.”

Owler also canvassed Indigenous health issues, and said that the “unacceptably high rate of Indigenous incarceration” had worsened during the past decade.

He said there is so much more to the gap in indigenous health outcomes than the diseases themselves.

“Health is intricately woven with the social determinants of health, our lack of knowledge of Indigenous culture, and the history of the relationship between Australia’s first peoples and non-Indigenous Australians that we are yet to adequately address.”

He also reflected upon the power of the AMA.

“We take the power and influence of the AMA for granted, and at times dismiss it. However, the AMA Presidency is arguably the most significant non-government role in Australia.

We have a reach and an influence that every other profession and other organisation envies.

We have unfettered access to politicians without donating a cent to political parties. The Prime Minister comes to us.

Almost all of the AMA President’s press conferences in the last two years have been covered live on the news channels.

This power and influence does not just come from any one individual, it comes from the AMA being willing to lead – a well-run organisation and a well-developed policy platform.”