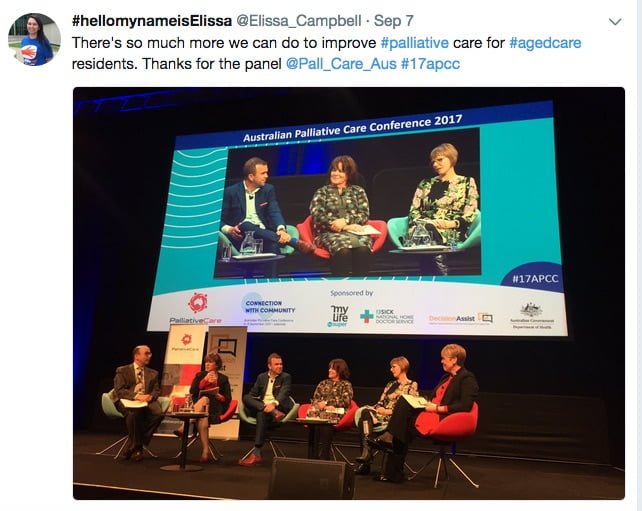 Aged care doctors may soon be making house calls in Australia via hologram – at least that was a suggestion at the recent Australian Palliative Care Conference in Adelaide.

But for all the technical advances that may help us deal with end of life matters, the conference also revealed significant gaps in the basics – including how we talk about death and dying, and important misunderstandings about palliative care.

This final post in Croakey Conference News Service coverage of the conference wraps reports on more presentations and discussions, including radical new understanding about pain and feedback from delegates. 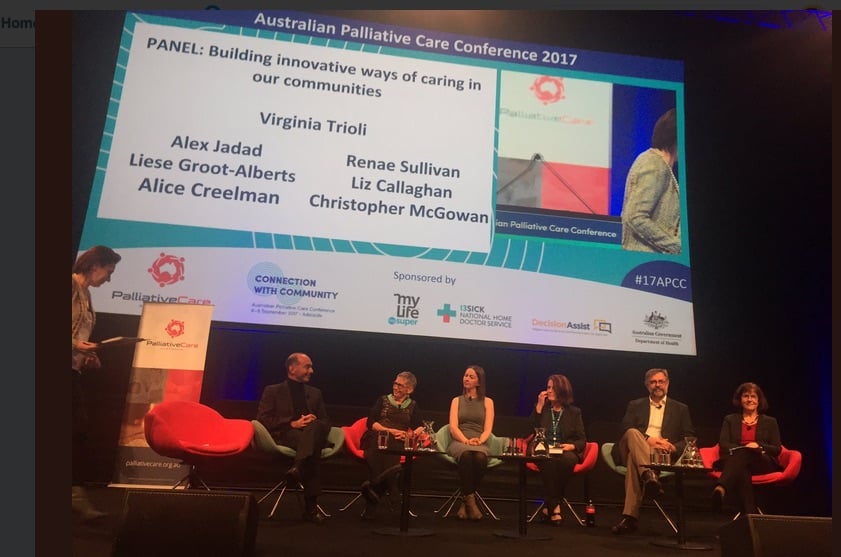 It looks like we soon may be able to beam in doctors for hologram house calls to help elderly people to stay longer in their homes.

Western Australia’s Silver Chain Group did not want to say more about its hologram health plan than the brief mention by its CEO Chris McGowan at the conference’s final session on ‘Building innovative ways of caring in our communities’.

Its media person would only say the Western Australian community health provider is “a couple of weeks away from doing a major reveal”. This United States story about a “virtual care clinic” may offer a glimpse, however.

It’s not connected to the global rideshare and food delivery business, but has some of its features – including being able to “rate” carers, and is batting back international interest until they bed down the local service, she said. 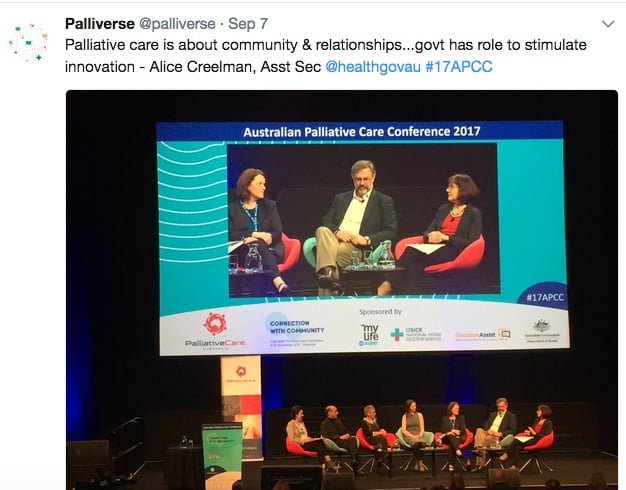 We know from gory and gruesome shows like Game of Thrones that death is “a best-seller in the box office,” author and doctor Leah Kaminski told the conference.

“But real death happens offstage a lot of the time,” she told a panel session that looked at ways to improve “death literacy” in the community.

They included growing interest in natural burial grounds (being buried in a natural environment with a marker such as a native tree or just a location identified on a map) and the Groundswell Project which hosts #DyingToKnow days and is the Australian base for the global Compassionate Communities movement.

The author of We’re All Going to Die “, Kaminski is also a big champion of getting “the D word” out of the closet. She remembered that, as a medical student, she rarely saw dead bodies and questioned why there remains such stigma around miscarriage that prospective parents often don’t reveal a pregnancy for 12 weeks in case they lose the baby.

Ironically, she said, we are happy to say we are “dying for a pee” but when it comes to someone dying, we opt for the euphemisms: “he passed… he went to a better place” and, a new one for many at the conference, someone had “taken a dirt nap”.

“We are a death-denying society,” she said.

Not just a place to wait for death

Most of us also don’t fully understand what palliative care is, according to a study led by Anna Collins from the Victorian Comprehensive Cancer Centre’s Palliative Medicine Research Group.

Collins told the conference the study was set up to explore initial perceptions of palliative care with patients with advanced cancer and their families, to uncover some of reasons behind variable engagement with palliative care in Australia and often late first engagement (with the median time to death currently 25 days). 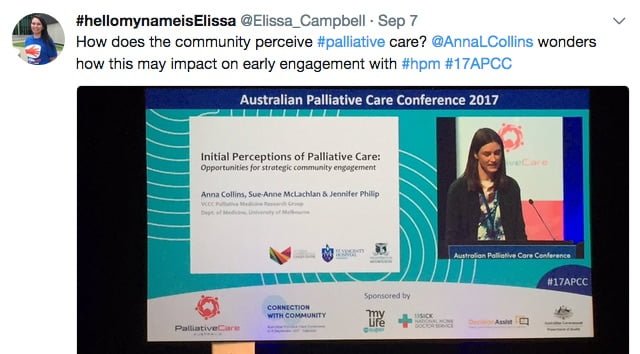 Collins expected that the results would reveal gaps in knowledge and understanding, but she was a little surprised at how narrowly and negatively most regarded palliative care before they experienced it.

Their perceptions fell within three themes:

It was basically seen as hospitalised dying – the care received in hospital while dying, which they understood to be the final days really.

What’s not surprising though, Collins said, is how they might get those views.

She showed a slide of the first 20 images that came up when she Googled palliative care. 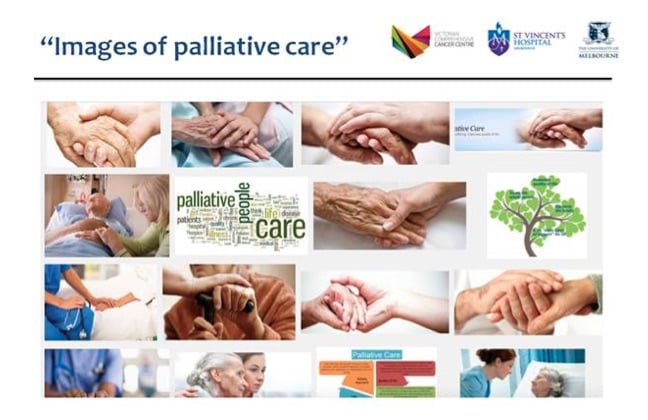 Collins challenged palliative care services to make sure that they way they present their own work “is in line with the evidence for what we do and the full scope of the services we offer”.

Better images would be taken outside of hospitals, and of a person doing things they might like to do, “the result of a medical team which focuses on your quality of life as well as your medical treatment.”

In response, she is developing short stories about palliative care told from different perspectives – by doctors, carers and patients, exploring both evidence and experiences, to find out what elements and characters of stories resonate more.

A full paper of her study findings is expected to be published in the October edition of Palliative Medicine. 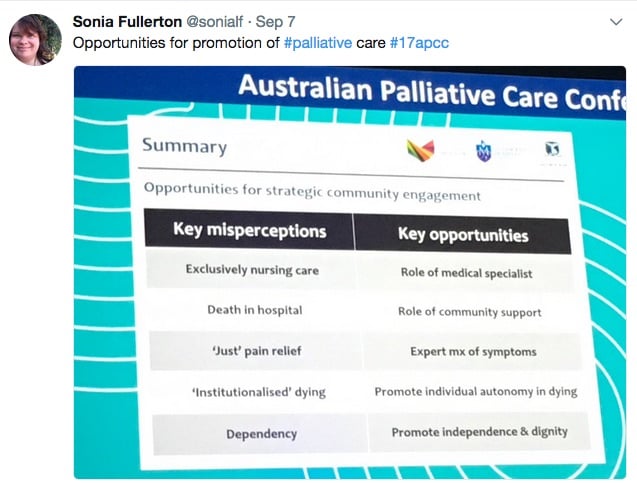 Sue Pieters-Hawke told the conference about the “amazing experience” that she had been privileged to have with the death of her mother, Hazel Hawke, who lived her last days in an aged care facility which, “unusually”, had strong integrated palliative care.

For nine days, the conference heard, the family was able to sit with Hazel. They enjoyed takeaway meals together and a bottle of wine in her room every night, and were able to sleep over in the room with her, while knowing that a dementia specialist nurse and palliative care specialist doctor were on hand if needed.

“We knew medical expertise was there in the background but our experience was of personally being with Mum at the end of her life,” said Pieters-Hawke, who is now an ambassador for Alzheimer’s Australia, informed by her mother’s experience of dementia.

“It was a precious, precious experience.”

What she took out of that, she told the conference, was that “death might be sad but doesn’t necessarily have to be bad”.

Pieters-Hawke said one of the reasons the family chose the aged care facility that it did was because management and staff were very open to talking about death, they didn’t use euphemisms.

The family was also driven by wanting to reduce unnecessary suffering that comes from ignorance or being unprepared, of having to make decisions under pressure.

“There are a lot of conversations to be had in families, in the medical profession, about getting ‘The D word’ out of the closet,” she said.

“Taking the taboo out of it, so we can be emotionally present, available and supportive for the person who is dying, but also for ourselves and each other.”

“There’s a sense of joy about how it happened that has left me sad that she’s gone but so grateful to all who contributed in so many ways to that being so sad but a meaningful and precious experience,” she said.

In a plenary panel session on the need for palliative care to be “core business” for aged care, Pat Sparrow, National CEO of Aged and Community Services Australia talked about the changing profile of people who go into aged care, to which the sector is still learning to respond.

They used to be built with car parks because residents would drive in and out, but that’s just not the case anymore.

Residents are much older now when they go in, with more complex health conditions. They also stay for much shorter periods, some for just 24 hours, often because of death but also for recuperation, after which they can go back home.”

That raises big funding and workforce issues for the sector, which one panelist said operates on maximum funding of $212 a day – “not an enormous amount of money to provide extremely complex care”, Helping Hand Aged Care director Susan Emerson said.

That’s particularly so, the panelists agreed, when good arrangements with specialist community palliative care services and GPs are “patchy” across Australia.

A new funding model is also on the agenda, questioning whether the current dollar amount per day based on certain resident characteristics is the right way.

Training and workforce skills are also a big issue, likely not assisted by Emerson’s revelation that the Certificate III in Aged Care no longer deems palliative care to be a core subject.

Ilsa Hampton, CEO of Meaningful Ageing Australia said strengthening the workforce is a major priority that has been raised with Aged Care Minister Ken Wyatt.

“It’s not just a skills base, where you learn to move a trolley from here to there, or to feed someone in a certain way,” she said.

“It’s a vocational thing, it actually has to involve your whole person in order to do really well. If you have that happening, people are more able to more flexible, not so rules based or task based so when you meet complexities in families or cultural situations, you’re better prepared to respond.” 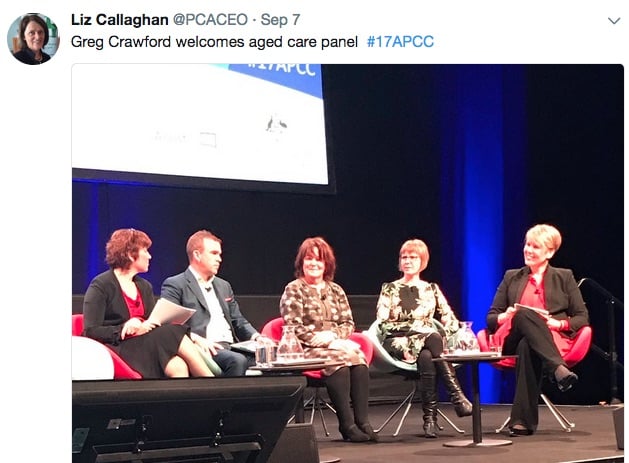 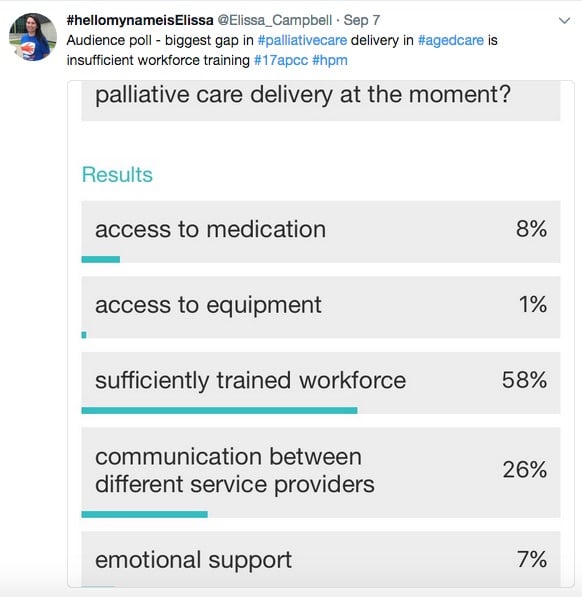 Unraveling the mysteries of pain

Delegates were also wowed by radical new thinking about the link between pain and the brain’s immune system that suggests “talk-based” therapies – like cognitive behavioural therapy ­– can actually change the cellular processes associated with pain.

Nuroscientist Professor Mark Hutchinson, Director of the ARC Centre of Excellence for Nanoscale BioPhotonics in Adelaide, outlined the theory based on the connection between chronic pain and glia – immune cells that support the brain’s nervous system.

It’s an approach that could open up treatment of debilitating chronic pain.

Read more about his work here and here. 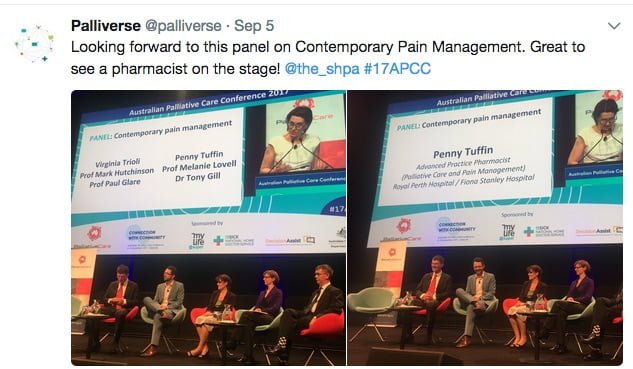 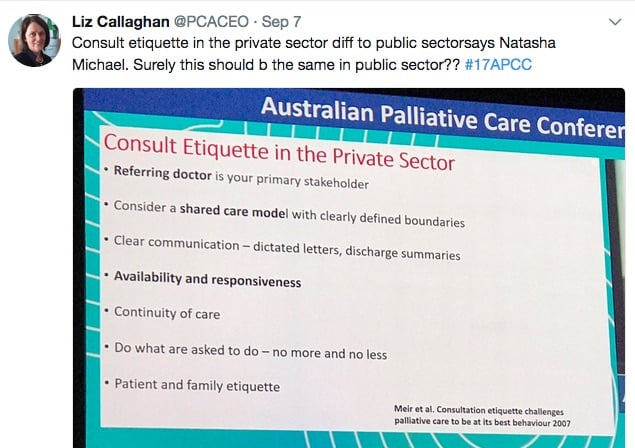 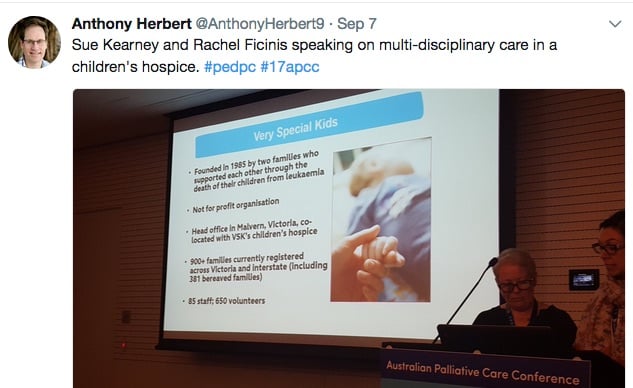 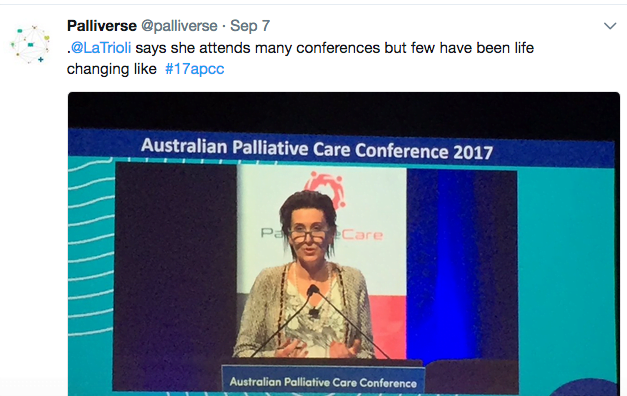 Croakey thanks the following delegates for providing their feedback on highlights, take-home messages, and what the conference has put on their agendas:

Christopher Martin: Clinical Psychologist who works in a specialist palliative care service, providing   assessment and therapeutic support to patients and their families/carers who are experiencing emotional/psychological distress.

Q1. What is your main takeaway/reflection from the conference?

Danielle: My main reflection from the conference is around frailty and working with the community and work colleagues to begin the conversation about the ethics of futile treatment.

Christopher: Palliative care espouses for our community to increase their acceptance that death is a part of life, however we negate including the word ‘death’ in our field’s definition; instead emphasising improving an individual’s quality of life. Our definition needs to be altered to demonstrate us “walking the walk”.

Q2. What were the standout presentations and why?

Danielle: Liese Groot-Alberts‘ session was the most inspiring, while the keynote talk by Dr Beth Russell (on palliative care triage) was the most exciting as issues surrounding the assessment of need occur so often.

Christopher: Dr Alex Jadad – helped us to step back and consider the underlying motives of our field during his keynote. Professor Mark Hutchinson – highlighted recent advances in chronic pain understanding and emphasised the dual benefit from medication & ‘talk therapy’.

Q3. What change/challenge will most occupy your work in palliative care over the next 12 months?

Danielle: Integrating PCOC (Palliative Care Outcomes Collaboration) tools within the inpatient setting and starting a conversation around recognising frailty and what is futile treatment will be my palliative care areas of focus for the next year.

Christopher: There has been limited research in ‘talk therapy’ within palliative care, so I’m hoping to commence a PhD that explores the potential beneficial role of Acceptance and Commitment Therapy for palliative care patients and their families/carers. I imagine this will take up some time! 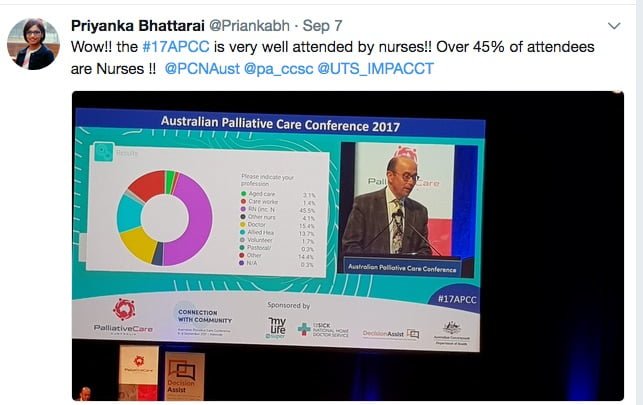 Read about the award winners here. 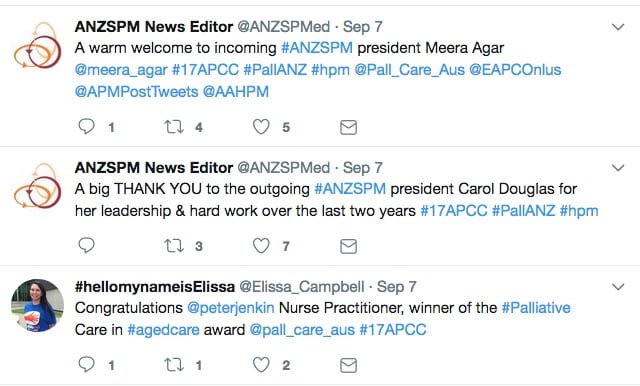 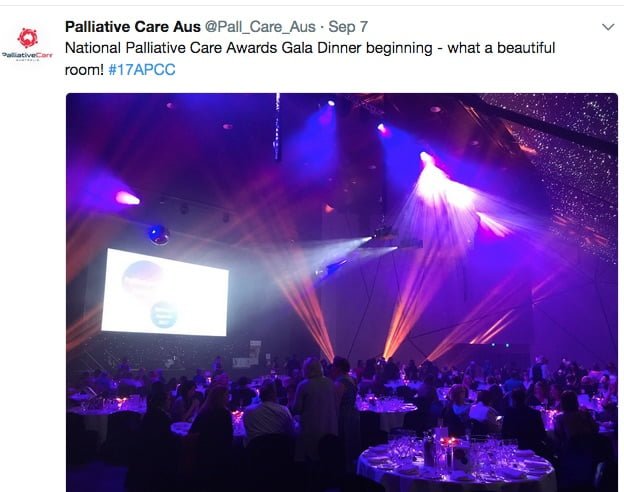 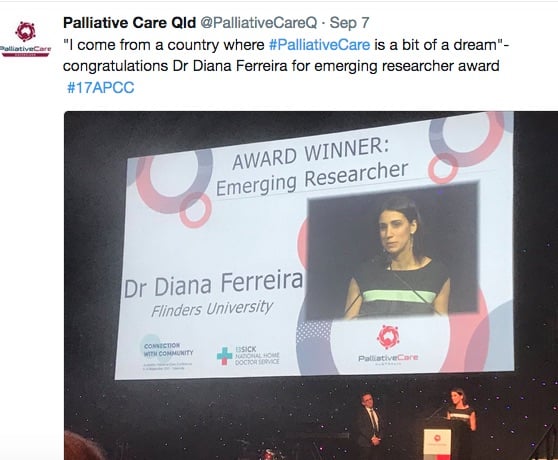 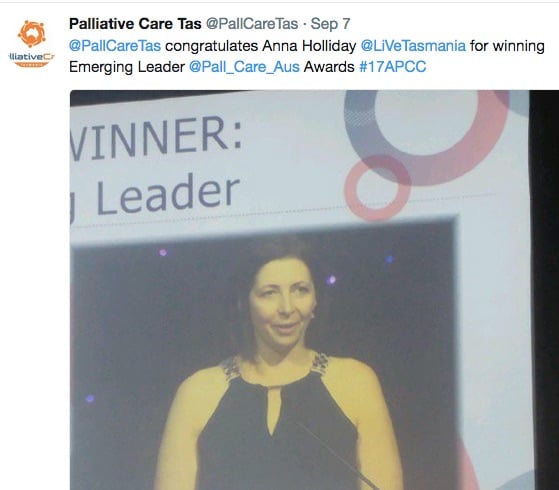 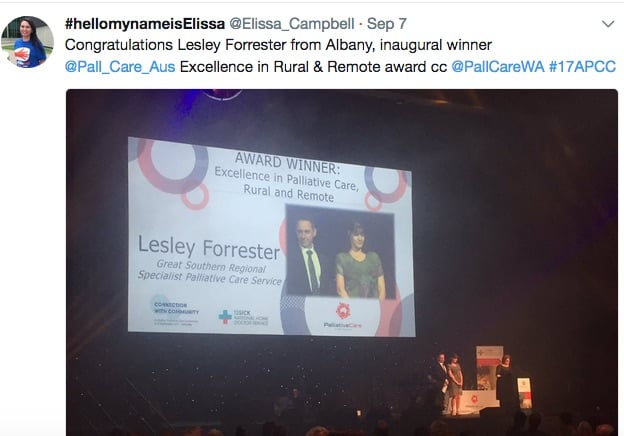 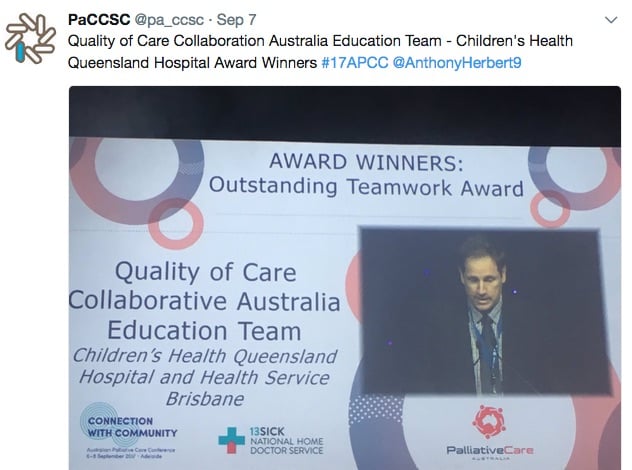 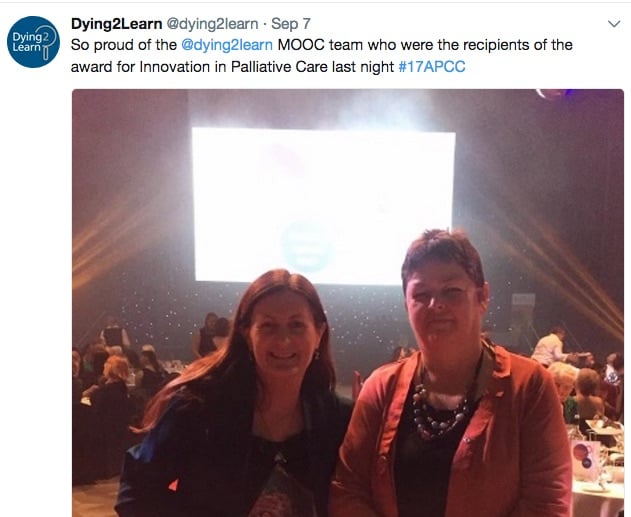 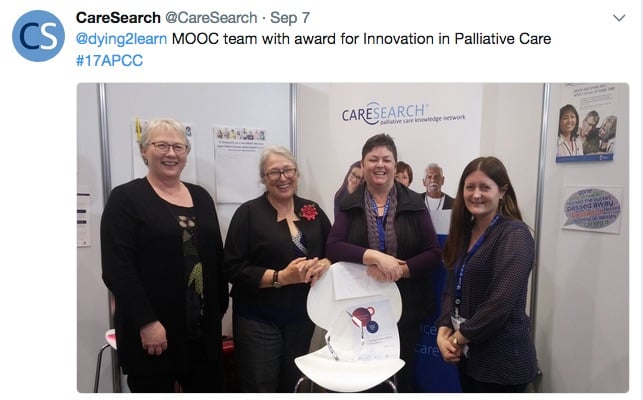 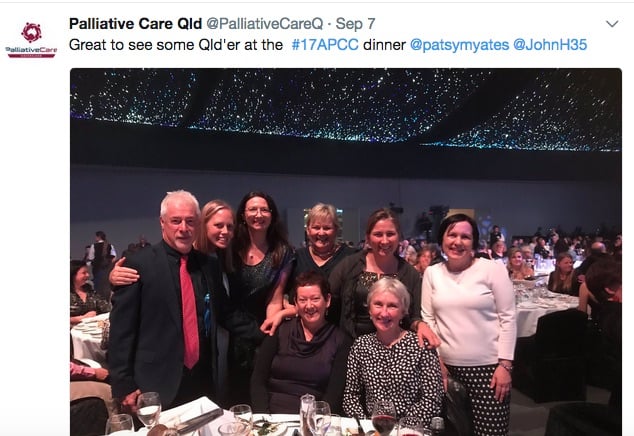 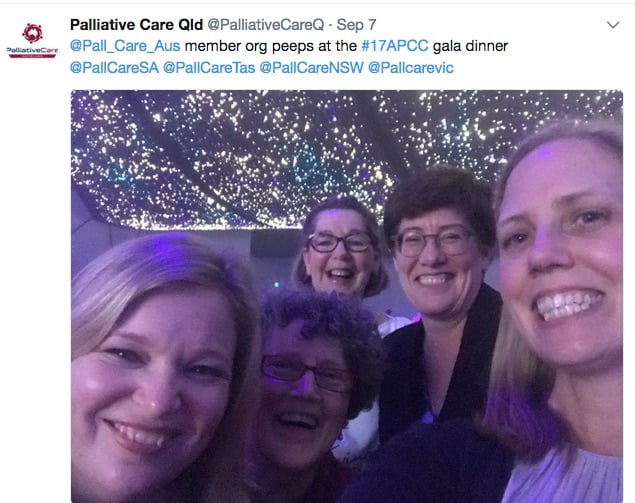 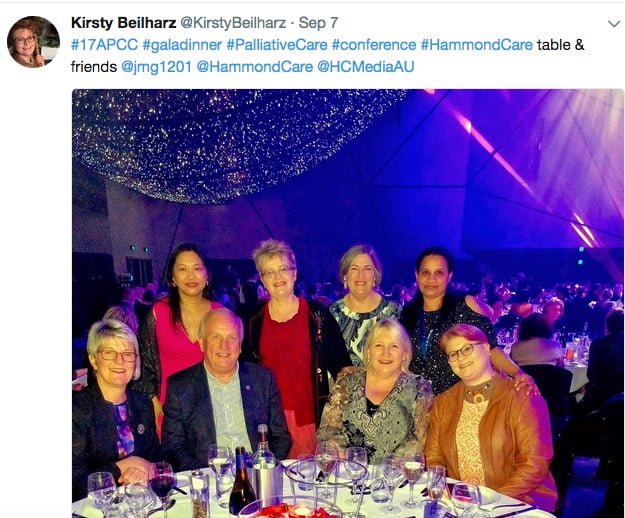 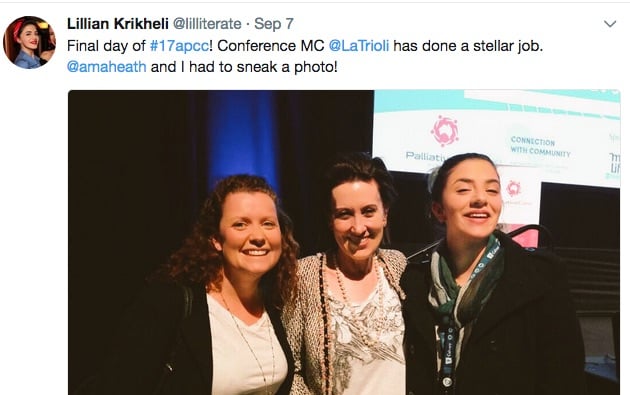 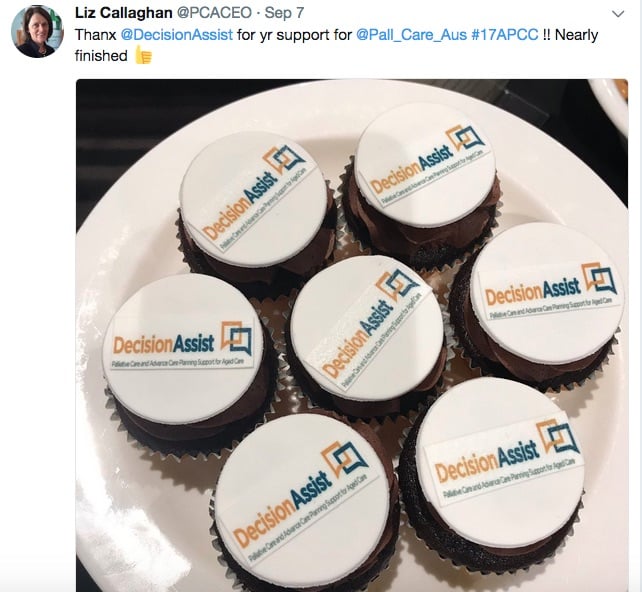 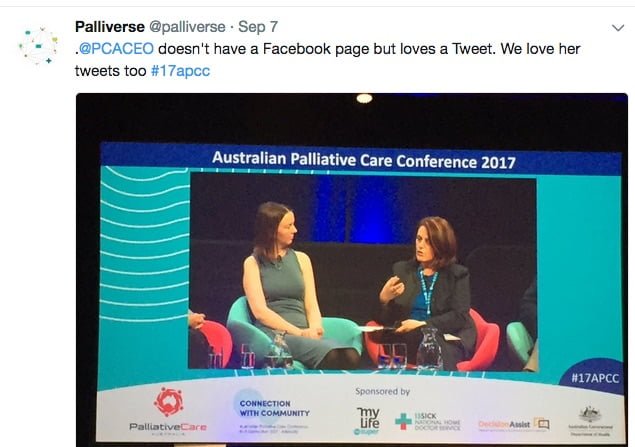 The #17APCC Twitter transcript can be read here and the analytics are here (and below), showing more than 30 million Twitter impressions and 950 participants. 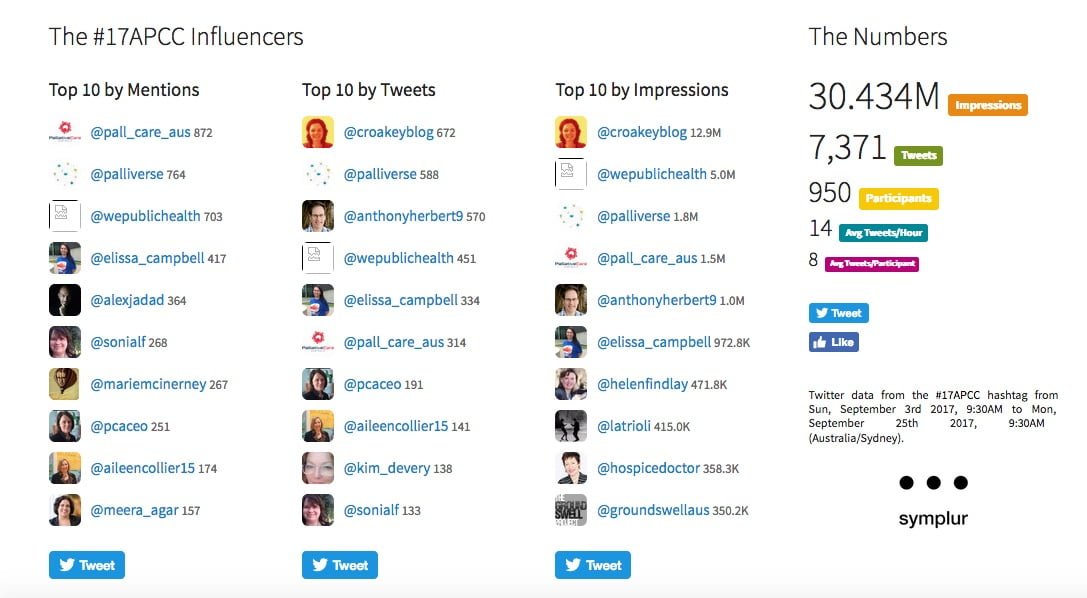 PrevPrevious“Vote yes. It’s good for kids” – advice from a children’s doctor
NextAMA and CHF not fooled by PHI policy and funding tricksNext