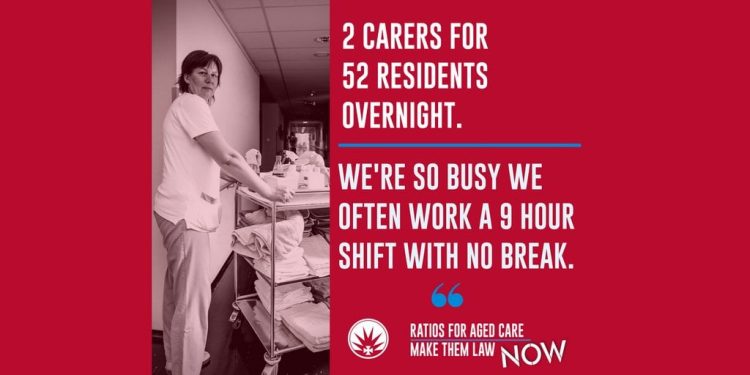 Wrapping some of the reaction to the federal aged care reforms: watch this space

He said the package will:

However Wyatt publicly rejected calls from the nursing union and elsewhere  for mandating staff-resident ratios, telling media there wouldn’t be sufficient staff for small country towns or remote Aboriginal communities and commenting that mandating ratios in childcare had increased the costs for families.

The federal reforms are in response to last year’s Carnell-Paterson review into how Commonwealth aged care quality regulatory processes “failed to adequately detect the longstanding failures in care” at Oakden.

Announcing the federal reform, Wyatt said the new Commission will be “a responsive, one-stop shop to prevent failures, highlight quality concerns and have them quickly rectified”. It will build, he said, on the recent introduction of unannounced re-accreditation audits across every one of Australia’s residential aged care facilities. He said:

“Importantly, the new Commission will give senior Australians and their loved ones a single point of contact when they need help in dealing with claims of sub-standard care.

“Risks to senior Australians will be investigated promptly and care failures identified faster.”

There have been mixed responses to the package – see a number of them below.

Croakey readers may also be interested to read about this new study by researchers at UNSW Medicine’s Centre for Healthy Brain Ageing (CHeBA), the Department of Aged Care at St George Hospital, and Calvary Health Care on ways to reduce hospital readmissions from aged care.

Published in the March issue of JAMDA, it found that an intervention approach that involves structured visits to healthcare professionals for nursing home residents after hospital discharge halves their chance of readmission and visits to emergency rooms.

The researchers said the findings highlight the importance of follow through care of nursing home patients after hospital discharge, “an aspect of care generally neglected in this group”.

Consumers Health Forum CEO Leanne Wells welcomed the establishment of the independent Aged Care Quality and Safety Commission and increased transparency on quality standards, particularly the introduction of truly unannounced visits “as providing a real snapshot of the care that is provided”.

But she said the reforms must be backed by stronger standards and more resources:

“We hope that the new Commission will see the value of having consumers as part of the accreditation and inspection teams as they can help frame discussions with consumers about their real experience of care.

“It is also clear that without better resourcing and staffing, many nursing homes will continue to struggle to provide the care we would expect for older Australians.”

Writing at Guardian Australia, Dr Sarah Russell said the merging of a number of agencies to form the Aged Care Quality and Safety Commission, rather than tackling “disgracefully 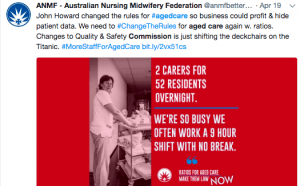 inadequate staffing requirements” amounted to ” shifting the deckchairs on the Titanic”.

Russell called for a review of the 20 year old Aged Care Act 1997, delivered under the Howard Government, which she said marked a turning point for aged care in Australia, in particular, increasing private investment in the residential aged care market and complete absence of any obligation on facilities to “take proactive measures to promote mental health and wellbeing of their residents”.

Staffing studies undertaken in the United States, Canada, United Kingdom, Germany, Norway and Sweden show that the ratio of registered nurses-to-residents has a positive impact on the standards of care in an aged care home. Wyatt ignores this empirical evidence.

Council of the Ageing

The peak body for older Australians and aged care consumers, COTA Australia, welcomed the announcement of the Commission as “another significant step towards better monitoring and enforcement of quality in Australia’s aged care system, together with the new regime of unannounced visits by quality assessors”.

However CEO Ian Yates said the government still needs to go further and give consumers direct control over their aged care funding, as recommended by several inquiries and this government’s own aged care advisory body.

COTA also pointed out that the Carnell/Paterson inquiry also included a recommendation for the appointment of a “Consumer Commissioner” in the new Commission, to develop processes to ensure consumers and families receive full information about their rights and are supported and protected to exercise those rights.

“The atrocities at Oakden were only brought to light thanks to the tenacity and persistence of Oakden family members, demonstrating the importance of having strong consumer voices heard in aged care quality processes, but we need to make it much easier, indeed normal practice, for consumers and families to be involved – that’s why we need the Consumer Commissioner’s role.”

National Seniors Australia also welcomed the creation of a new watchdog for the industry, with a single point of contact, and greater transparency around standards.

In a statement, National Seniors Australia Chief Advocate Ian Henschke said putting all the functions of three different aged care bodies into one could be a challenge but if well implemented, it should lead to better monitoring and early detection of quality of care issues.

“We look forward to working with the government on developing the performance rating system as well as a Serious Incident Response Scheme and a user-friendly comparison tool on the My Aged Care website.”

“We would also like to see the new commission use its broader functions to identify and implement practical changes that would improve the quality of care for all older Australians, so they receive the kind of care they deserve,” he said.

However while the Commission was “a good start”, much more needed to be achieved to ensure older Australians receive the care they need and deserve in their later years, he said.

The Position Statement outlines the workforce and funding measures that the AMA believes are required to achieve a high quality, efficient aged care system that enables equitable access to health care for older people. Key recommendations include:

Bartone said that AMA members have reported cases where nurses are being replaced by junior personal care attendants, and some residential aged care facilities do not have any nurses on staff after hours. He said:

“It is unacceptable that some residents, who have high care needs, cannot access nursing care after hours without being transferred to a hospital Emergency Department.

He said the aged care needed more full time nurses, greater incentives for doctors to attend aged care facilities on a more regular basis to meet demand and ensure quality medical care, and enforceable standards that require facilities to provide clinically-equipped doctor treatment rooms that are readily available for use by doctors and nurses, with access to patient files, in existing and future residential aged care facilities.

Shadow Minister for Ageing and Mental Health Julie Collins welcomed the reform plan but criticised the government for having sat on the Carnell-Paterson review since last October, as well as “more than a dozen” other relevant reports.

“We know that this Government has three Ministers in five years for aged care. We know that it has ripped billions out of the aged care system. What we need to see from the Government in the upcoming Federal Budget is more action on both this report and other reports, but also more investment into aged care. We have now, in Australia, more than 100,000 Australians sitting on a waiting list for home care packages. We think it’s about time the Government dealt with this issue and I’ll continue to put pressure on the Government to do so.

This week’s aged care reform continues the tradition of federal governments tinkering at the edges of the heavily regulated and mostly taxpayer-funded sector, but putting off a major overhaul of its old-fashioned funding model.

PrevPreviousSave the date for a mental health-focused Sydney CroakeyGo!
NextHave your say: time for consumers to be “makers & shapers” in health care, not just “users & choosers”Next