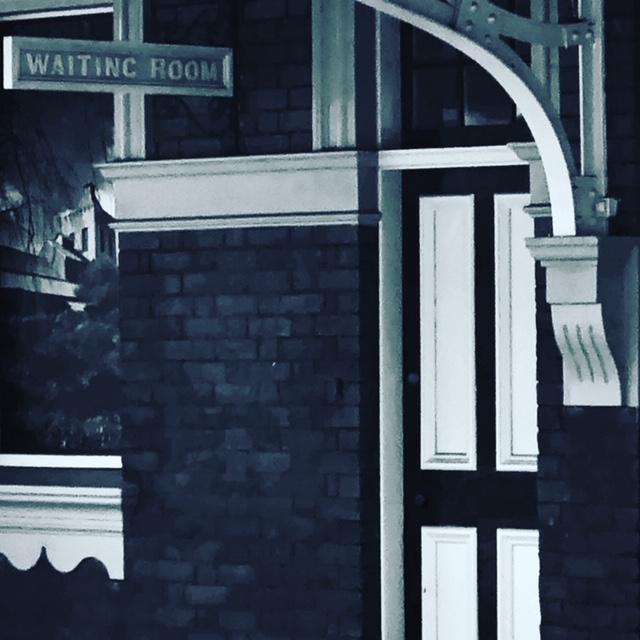 Still in the waiting room, when it comes to policies to promote health equity

The Federal Government’s Mid-Year Economic and Fiscal Outlook (MYEFO), published this week, updates the economic and fiscal outlook from the previous budget, with this extract providing an overview of health and aged care details.

More details are also outlined in this joint statement from Ministers Greg Hunt and Ken Wyatt AM – which is best read in conjunction with Professor Stephen Duckett’s analysis, Morrison’s health handout is bad policy (but might be good politics).

From a health perspective, MYEFO gaps include a lack of: investment in addressing climate change as a critical health threat; a cohesive, strategic investment in public health and prevention; any effort to reduce the social and economic inequalities that drive so much health inequality (at the same time as squirrelling money away for election campaign announcements of yet more income tax cuts).

Universities are up in arms over research funding cuts of $328.5 million over the next four years, stating that this “Budget raid on research” was more than double the size they had expected.

In an article at The Conversation, Professor Margaret Gardner, Chair of Universities Australia and Vice-Chancellor of Monash University, said the freeze on growth in research funding and PhD scholarships follows last year’s freeze on funding for student places (as covered by Croakey at the time in this series, What will funding cuts to universities mean for the future health workforce? Part one and part two).

Gardner said the effect will be felt immediately by the nation’s researchers and their research projects in positions lost and projects slowed, limited or not started. “But the damage done will be felt for much longer – in inventions, ideas and opportunities missed,” she wrote.

Even before these cuts, Jackson noted that Australia’s Government spending on R&D was forecast to plunge to a four-decade low of half a per cent of GDP this year. 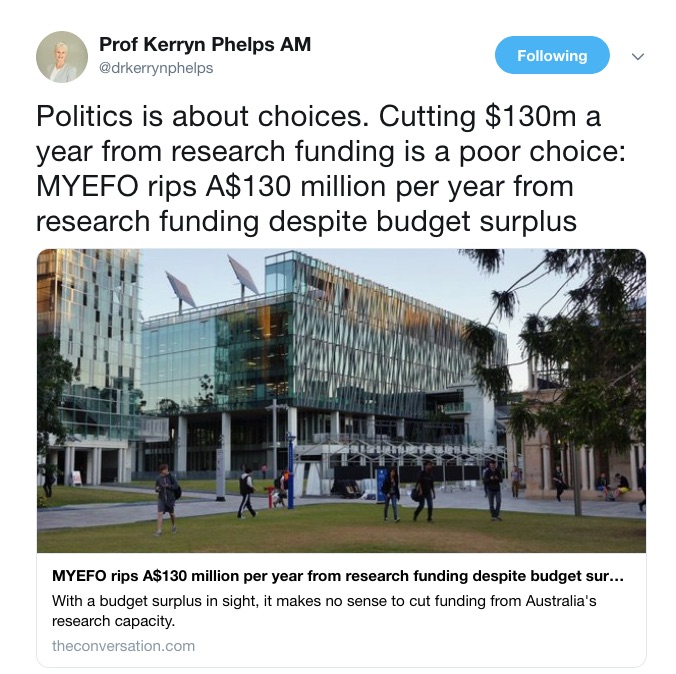 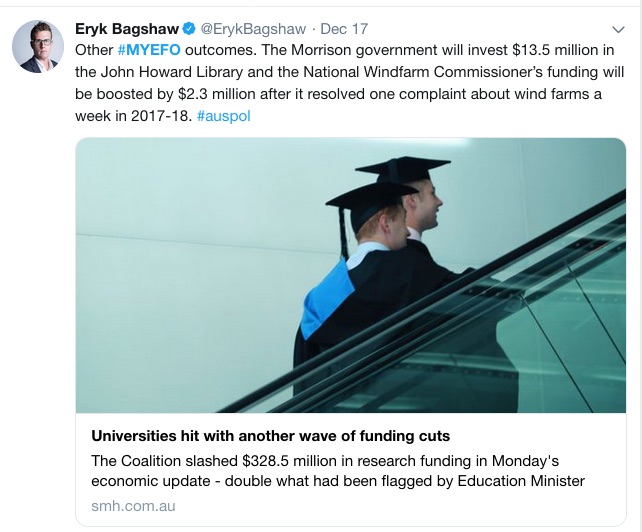 The Australian Council of Social Service says the MYFFO is another “fairness failure from the Morrison Government” and that it “fails to share Australia’s prosperity with those who are living in poverty and, despite welcome investment in aged care, fails to secure essential services into the future”.

ACOSS CEO Dr Cassandra Goldie said: “The Government’s track record on services funding is dismal: more than $15 billion has been cut from essential social security payments and community services in the last 4 years. Despite Australia’s prosperity, people living in poverty are continuing to be left behind by the Morrison Government.”

ACOSS welcomed the additional investment in aged care services, but said it “will not make a dent in the enormous backlog of demand, with a waiting list of more than 120,000 for home aged care places”.

ACOSS also welcomed the decision to not proceed with a proposal to require prisoners to reapply for the Disability Support Pension after very short periods in custody, but is “very disappointed” to see a further extension of the Cashless Welfare Card trials and income management funded in MYEFO.

The move to force new migrants to wait for up to two years to receive government assistance to raise their children and take parental leave was “truly cruel”, she said.

“We are also disappointed to see that a number of other slated cuts and punitive social security policies have remained on the books, including cutting the pensioner education supplement and education entry payment and introducing drug testing for payment recipients.”

The MYEFO also makes it clear the Government remains committed to drug testing of welfare recipients, despite widespread concerns about its harmful impacts.

The rural health sector was pleased, with some caveats.

The Australian College of Rural and Remote Medicine (ACRRM) welcomed the announcement of an additional $318 million for General Practitioners and Rural Generalists.

ACRRM President Dr Ewen McPhee said this was a first step in strengthening rural primary health care, and would allow for an extended scope of services in rural communities across general practice clinics and hospitals where rural generalists practise.

He said in a statement:

ACRRM particularly welcomes the commitment of a $33.5 million to increase access for remote and rural patients through telehealth. ACRRM has advocated for greater access to telehealth services in rural committees, when delivered in conjunction with face-to-face consultations with rural generalists who understand individual’s health care needs, so this is tremendous news.

The government’s commitment to further invest in Indemnity Support Schemes is also positive and we look forward to further information on how this will specifically maintain service levels in rural communities and how it will impact the National Rural Generalist Program.

More detail is also required on new services being added to Medicare and the benefit this will have for rural people. Likewise, the announcement of $5.8 million to trial community-based specialist nurses to care for people living with neurological conditions, including Parkinson’s disease, is positive, and we look forward to finding out the impact of this in rural areas.” 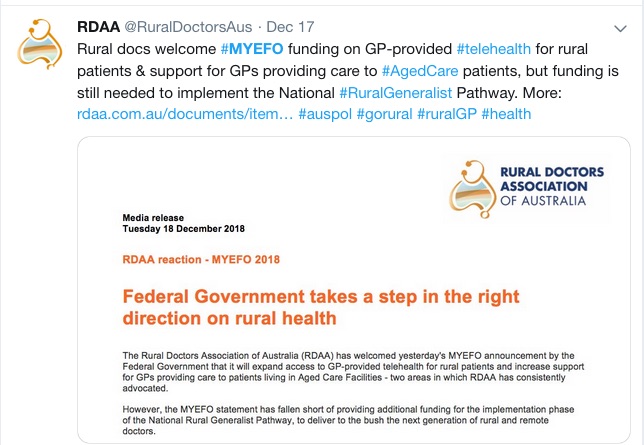 The National Rural Health Alliance welcomed the GP funding announcement but highlighted gaps around allied health services, and also stressed the need for nursing and allied health professions to be able to also claim on the Medicare Benefits Schedule for telehealth consultations with people in rural, regional and remote areas.

Rural and remote communities need access to a broad range of services to support the work that GPs do – primary care requires the input of a range of professionals including nursing, physiotherapists, psychologists, dieticians, social workers and occupational therapists among others.

Much of the Government’s MYEFO announcement of $512 million is about primary healthcare – that provided by doctors – but remote and rural communities also need to and deserve the broad range of health services necessary to support the GPs.

The lack of supply and distribution of most allied health professionals in remote and very remote areas means that services are just not available.

Telehealth would enable these services to be accessible in much the same way as will now be possible with a GP consultation – that’s what we need. It is already available for psychologists providing mental telehealth services – the government just needs to make telehealth available to the other professions as well.”

The Alliance also welcomed the provision of tailored after-hours health services through Primary Health Networks and changes to the MBS to allow consumers to claim for a range of new health services.

The bringing forward of additional home care packages and particularly the 30 per cent increase in viability and homelessness payments (totalling $111.2m) would be of particular benefit to remote and Indigenous residential aged care providers in remote and isolated areas, the Alliance said.

Where is the innovation?

The Australian Healthcare and Hospitals Association, in a statement released last week, called for more community-led solutions in primary care and a greater focus on reducing Aboriginal and Torres Strait Islander health inequities. The statement said:

New workforce models, including using Aboriginal and Torres Strait Islander health coaches, provide an opportunity to build a stronger Aboriginal health workforce as well as improve health outcomes and community capacity to care for those who are sick.

Indigenous Australians discharged from hospitals also need to be able to access medicines through the Closing the Gap PBS measure—which they can’t right now. There’s no value in sending people home from hospital without the care and medicines they need to stay healthy.

New workforce arrangements are also needed to ensure people living in rural Australia can access care. There’s been a significant commitment to rural GP care in the past year—and this now needs to be extended to allied health. There are far too many rural communities in Australia that don’t have access to physiotherapists, speech therapists and other allied health services.

Also needed is more money for public dental health services, and a commitment to extend the National Partnership Agreement beyond its current expiry date of 30 June 2019. We estimate at least $500 million per year is required to meet current demand.”

CHF CEO Leanne Wells said it was encouraging that the Government had targeted more funding for care in the community and for its Health Care Homes trial:

We support these hints of a move away from the hospital-centric orthodoxy. The development of initiatives such as the Health Care Homes and increased support for care in the community of people with chronic and complex conditions will help to integrate and improve care.

The Minister has sought to respond to issues and needs in numerous areas of health including in treatments for eating disorders, obstetric MRIs, veterans’ medical benefits and telehealth for drought-affected rural people.

However the incidence of so many chronic conditions like obesity, cancer, heart disease and diabetes could be reduced through strong and effective preventive health programs that would embed healthier diets and lifestyles from earlier in life.”

Wells called for a shift away from the current rigid fee-for-service arrangements to funding arrangements that unlock the potential for comprehensive, coordinated, team-based services should be a priority so that all Australians can benefit from a modernised Medicare.

“The fee for service system under Medicare needs to be reformed to spur more flexible and responsive care including bundled and blended payments for team-based care, telemedicine and skype consultations,” she said.

Meanwhile, under a MYEFO statement of risks, some potential public health concerns are raised around contaminated sites at up to 36 airports.

The paper says Airservices Australia has identified 19 federally-leased airports and 17 regional airports that are potentially contaminated with PFAS or per- and poly-fluoroalkyl substances previously contained in firefighting foams.

The identified contaminants do not naturally break down in the environment. The paper says that according to the Environmental Health Standing Committee (enHealth), a joint Commonwealth‑state standing committee of the Australian Health Protection Principal Committee (AHPPC), which reports to the Australian Health Ministers Advisory Council (AHMAC), there is currently no consistent evidence that exposure to PFAS causes adverse human health effects.

For federally-leased airports, Airport Lessee Companies are responsible for environmental management of their airport sites. Airport leases indemnify the Commonwealth in relation to damages or injury to the environment. Liability has not yet been established for costs arising from PFAS contamination.

Currently, there are two class actions against the Commonwealth seeking damages over the use of historical PFAS-containing firefighting foam by the Department of Defence at Williamtown and Oakey, with potential implications for the Department of Infrastructure, Regional Development and Cities, and Airservices.

Brisbane Airport Corporation has also commenced legal proceedings in the Queensland Supreme Court against Airservices in relation to legacy PFAS contamination from Airservices’ firefighting activities at the airport.