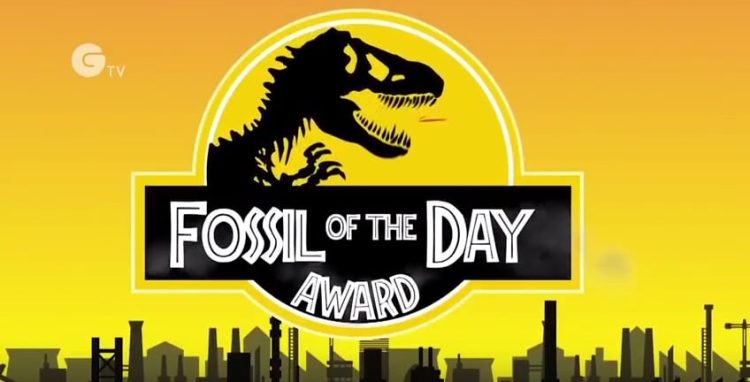 "Who is working really hard to wreck our climate?"

Who is the best at being the worst? Who does the most to do the least? And who is working really hard to wreck our climate?

These were some questions on the minds of judges of the “Fossil of the Day” awards at the recent COP23 talks in Bonn.

Dr Alice McGushin, a member of Doctors for the Environment Australia, was there to collect on behalf of Australia. It was a “bittersweet moment”, she writes below in her final report from the climate talks (read her previous article for Croakey here).

Climate talks at COP23 in Bonn ended last week. Some progress has been made towards the Paris Rulebook, which will be finished at COP24 in Katowice, Poland next year.

The Fijian and Polish presidencies are preparing for the Talanoa Dialogue, which aims to address the key issues of combating climate change with an inclusive and transparent dialogue to develop a common understanding, resulting in “better decision making for the collective good”. This Pacific tradition creates a constructive platform while the world continues to come to terms with the great hole left by the USA.

As I discussed last week, health has been present in force outside the formal negotiations, with highlights, including the Climate and Health Summit and the World Health Organization’s Presidency Event, where Arnold Schwarzenegger called for health warning labels on fossil fuels.

Governor Schwarzenegger was not the only one saying “hasta la vista, coal”.

COP23 also saw the launch of the Powering Past Coal Alliance, a pledge to phase out coal signed by 20 countries, led by the UK and Canada. In the announcement, Canada’s environment minister, referred to the human cost of coal.

Canada’s new leadership could be attributed to, in part, the incredible perseverance and determination of the Canadian Association of Physicians for the Environment and other Canadian health organisations that have been lobbying Canada to phase out coal.

Countries of note that have not signed up to the alliance are Germany, the surrogate host of this year’s climate talks, China, India, the USA and, unfortunately unsurprisingly, Australia.

Whilst the rest of the world (with some notable exceptions) does appear to be making some progress towards meaningful action to deal with anthropogenic climate change, Australia continues to be a laggard, ranking fourth last on the Climate Change Performance Index.

We again performed “well” in the Climate Action Network’s Fossil of the Day awards, receiving awards for our incomprehensible support for the Adani Carmichael Coal Mine (which has received criticism from former UNFCCC executive secretary, Cristiana Figueres) and our push to undermine support and finance for Loss and Damage.

It was a bitter-sweet moment when I accepted the Fossil of the Day award on behalf of Australia from our Pacific Island neighbours.

Minister Frydenberg highlighted the importance of transparency and clear guidelines for countries’ nationally determined contributions to the agreement, but also promoted Australia’s 2030 target to reduce emissions by 26 to 28 per cent below 2005 levels as an ambitious target.

Australian ministers have made strong claims about this target since it was adopted in 2015, despite being one of the worst in the OECD and far from our “fair share” of limiting warming to 1.5 degrees, demanded by our Pacific Island neighbours.

At the closure of COP23, there is a lot of work to do. In Australia we must continue the #StopAdani fight, as we know that this project cannot go ahead if we are serious about limiting global warming to 1.5 degrees.

At the same time, we should call on our Government to move on from its relationship with coal and sign join the Powering Past Coal Alliance, increase our NDC, introduce real climate change mitigation policies to ensure our fair share of support to other countries, both financially and by reducing our contribution to climate change. And Australia must be constructive in the UNFCCC negotiations.

As health professionals, we should listen to the Coal Terminator – no one should speak about the environment without including health and action to protect our environment, which is exactly what the doctor prescribed.

• Alice McGushin has been attending COP23 in Bonn. She is a junior doctor from Tasmania and a member of Doctors for the Environment Australia. She is currently in the UK studying an MSc Public Health at London School of Hygiene and Tropical Medicine.

Watch the Fossil of the Day award presentation

Working on a rulebook for the Paris agreement