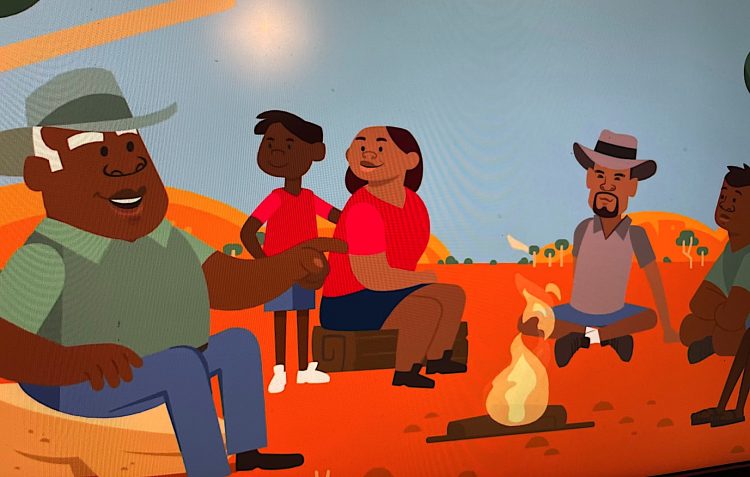 Image from the Heart Check video.

The cultural determinants of health are integral to effective health communications for Aboriginal and Torres Strait Islander people, suggests the article below, first published at The Conversation.

Dr Celeste Rodríguez Louro, from the University of Western Australia, and Glenys Collard, a Nyungar woman and author, describe the story behind two videos about heart health that were fully scripted and produced in Aboriginal English.

One way to improve health outcomes is through targeted health communication in local languages.

The COVID-19 pandemic has seen increased attention given to the use of Indigenous languages in health settings around the world, including Australia.

Many COVID-19 resources have been developed in partnership with local communities, including in widely-spoken Australian Aboriginal languages such as Kriol. Other initiatives have inspired new Indigenous health professionals to effectively communicate complex medical terminology and concepts to communities.

However, communities that use Aboriginal English as their language in daily interactions require health communication messages in the same language to be meaningful and accessible.

Read more: We’re not all in this together. Messages about social distancing need the right cultural fit

Exploring how to yarn about health

In the past 18 months, we have been working with the Heart Foundation on the production of two videos about heart health that were fully scripted and produced in Aboriginal English (the first of which can be viewed here).

When we were initially approached, the brief was to create a video in “simple English” to ensure the health message would be available to First Nations communities across Western Australia.

However, Glenys Collard (one of the authors of this piece) says this is not the language of choice for most Aboriginal people:

I never felt the need to want to learn or to speak mainstream Australian English; it didn’t come out my mouth easily.

None of the people that I loved or looked up to in my life spoke mainstream Australian English. It didn’t feel right to me to speak differently to the rest of my family and friends. I wouldn’t have been able to truly respectfully represent my people.”

Both of the videos we created include a host of features that characterise Aboriginal English: the words “mob”, “fellas”, “crook” and “youse” are only some examples. The videos were also designed to include communication between a group of First Nations people gathered together outdoors. The entire video is presented as a yarn.

The practice of yarning is a form of conversation and storytelling that includes repetition as a way to emphasise what is important in the message. The video features repetition and use of familiar language as a way to warm the audience up to the medical message. These features made it possible to communicate important medical information in a culturally safe way.

Read more: 10 ways Aboriginal Australians made English their own

The work we completed on these videos gave us a unique opportunity to use our experience and linguistic expertise to create materials the community can relate to. We used a yarning style to present messages about attending heart health checks and the potential signs of a heart attack.

The scripting process was slightly different from what it would have been if the script had been written in Australian English. Collaboration, inclusion and Indigenous leadership were essential to its success.

The benefits of this research

We received positive feedback on these videos. To evaluate the success of the project, the Heart Foundation administered a survey to various Indigenous communities across Australia. A consistent comment during this consultation was that the people in the video “talk like us.”

This initiative has created opportunities for Indigenous health professionals to communicate complex terminology to their Indigenous patients in medical consultations. However, these efforts to create culturally and linguistically inclusive resources have not been available for all communities.

Language is fundamental to a sense of identity. Producing a video in Aboriginal English allows First Nations communities to relate to media directly and to feel the messaging is intended for them.

This is especially important during the global pandemic, when some Aboriginal Australians were feeling apprehensive about vaccination.

Organisations wishing to work this way will need to ensure First Nations people with the relevant expertise join the project from the beginning and become fundamental players in the planning and design stages. Organisations must also ensure that remunerated positions are created to complete this important work.

In producing these videos, we hope to have contributed to addressing the lack of Aboriginal English from medical media and to emphasise the importance of collaborative work. Working across cultures on materials the community will relate to is one more way to safeguard Indigenous health and well-being.

Dr Celeste Rodríguez Louro is Senior Lecturer and ARC DECRA Fellow at the University of Western Australia. She is also vice-president of the Australian Linguistic Society (ALS).

Glenys Collard is a Nyungar woman who has been working for and with the Nyungar people across WA for over 30 years. Glenys is a published author and has taught workshops to thousands of teachers and university students in WA.

See Croakey’s archive of stories about the cultural determinants of health.