Putting the social determinants of health on the political/policy agenda is no easy task, given the many barriers involved, not least the silos that so often impede the work of governments and service delivery. 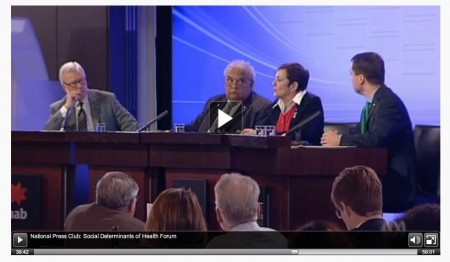 While broad-based coalitions are important in helping to address some of the barriers, they also raise their own challenges – as was in evidence at the recent Social Determinants of Health Forum at the National Press Club (watch it here).

The speakers were Dr Tom Calma, Founding Chair, Close the Gap Campaign and Chancellor of the University of Canberra, Kate Carnell, Chief Executive Officer of the Australian Chamber of Commerce and Industry, and Martin Laverty, Chair of the Social Determinants of Health Alliance and National Chief Executive Officer of the Royal Flying Doctor Service, and former CEO of Catholic Health Australia.

The panel agreed upon many issues, but viewers were left with mixed messages about the importance of universal health care in tackling the social determinants of health.

While Calma emphasised the importance of access to primary health care, Carnell and Laverty supported the concept of copayments for general practice (though they didn’t like the Government’s current proposal, and Laverty did make clear he was not speaking on behalf of the Social Determinants of Health Alliance on this matter).

It’s worth quoting here from the 2008 report, Closing the gap in a generation: health equity through action on the social determinants of health:

“Health-care systems contribute most to improving health and health equity where the institutions and services are organized around the principle of universal coverage (extending the same scope of quality services to the whole population, according to needs and preferences, regardless of ability to pay), and where the system as a whole is organized around Primary Health Care (including both the PHC model of locally organized action across the social determinants of health, and the primary level of entry to care with upward referral).”

Below is an edited extract of Martin Laverty’s address to the NPC, in which he suggests the Government could fix its budget woes by acting on the social determinants of health.

There is a gap in life expectancy between socioeconomic groups in Australia.

The National Centre for Social and Economic Modelling (NATSEM) reports females in the lowest socioeconomic group die on average two years before those in the highest group, and for males the gap is three and a half years.

In addition to confirming a gap in life expectancy between rich and poor, NATSEM also reports that when Australians in the lowest socioeconomic group reach the age of forty-five, they suffer three times the amount of chronic illness than those in the highest group.

Yet the World Health Organisation (WHO) believes “safe pregnancy, early childhood experiences, educational attainment, secure employment, and safe housing,” are the building blocks of good health that determine who live longer lives and who will likely suffer chronic illness.

Yet there are other gaps in life expectancy not receiving the attention they deserve. The Australian Institute of Health and Welfare’s Snapshot of Men’s Health in Regional and Remote Australia reports male death rates from diabetes were 3.7 times higher in remote areas as compared with major cities.  Death rates were reported as eighty percent higher in remote areas compared to major cities.

To help explain the gap in health outcomes between those who live in the city or the bush, or those who have wealth and those who do not, the WHO says “There is no necessary biological reason why there should be a difference in life expectancy between social groups in any given country. Change the social determinants of health,” the WHO said, “and there will be dramatic improvements in health equity.”

This unusual three party alliance of health organisations, the Indigenous community, and the business community, agree that the health of the Australian people, and the health of the Australian economy, is dependent on ensuring all children have positive early development, that all children are able to achieve school completion, that all Australians can live in secure housing, and that all Australians who can work do, and that those who can’t have a sufficient means to live.

Another unusual three party alliance has already agreed on what action should be taken by the Australian Government to build better social determinants of health.

A joint inquiry of the three political parties found chronic illness could be cut, and extra years added to life expectancy of those in low socioeconomic communities if Australia ratified in the Parliament – and put into practice – a 2008 WHO Social Determinants action plan.

Despite this rare moment of political agreement, twelve months on; the recommendations of that joint inquiry are gathering dust. The three political parties haven’t walked away from agreement to ratify in the Parliament the WHO plan; they’ve simply not got around to it.

Perhaps the cross bench members of the Senate, who appear to have the Government’s ear right now, might want to pull out the Inquiry report and remind the Government of their earlier agreement to act on social determinants.

Beyond the political process, others are acting on social determinants. Consider a local initiative in the northern NSW regional community of Coledale. They’re working to reduce crime, to lift school attendance, and make a dent in chronic illness reduction by coordinating existing government and non-government programs to better respond to local social circumstances.

Consider the national proposals of Andrew Forrest, who earlier this month in releasing with the Prime Minister plans to address Indigenous disadvantage, said “Disparity comes to an end when a first Australian, or any other Australian, gets a decent education.”

Further afield, the Canadian Medical Association determined their key priority for Government to improve health outcomes for Canadians this year was not more hospital beds, but reduction in poverty.

Parts of Canada are now screening for poverty in doctors’ surgeries as a chronic illness indicator, in the same way that screening for high blood pressure, cholesterol, and smoking prevalence regularly occurs in doctor’s surgeries in Australia.

In fact, the College of Physicians in the United States have said whether or not you finish school better indicates your chance of an avoidable cardiovascular death than your blood pressure, your cholesterol, and your smoking prevalence, combined.

The action the Social Determinants of Health Alliance seeks from Government is action the Government committed to, but is yet to deliver. NATSEM says acting on social determinants could save the Federal Budget billions.

With the Budget currently stuck, it’s a good time to act.

• Martin Laverty is the Chair of the Social Determinants of Health Alliance. This is an edited extract of his speech delivered to the National Press Club (on Wednesday 20 August)

PrevPreviousIs it time to revisit pharmacy ownership?
NextThe Sins Of The Other Or Silence Of The Self? Ebola In West AfricaNext