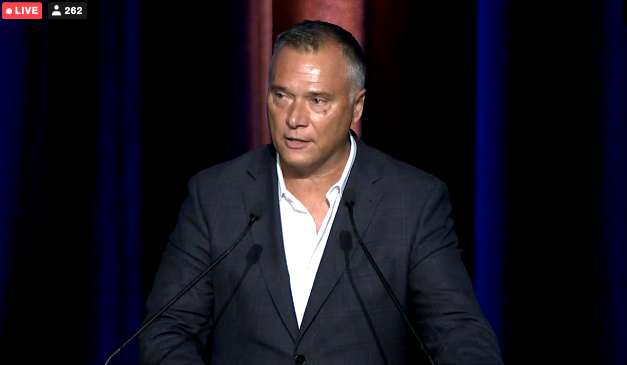 Introduction by Croakey: Wiradjuri and Kamilaroi journalist Stan Grant will chair a special edition of the ABC’s flagship Q and A programme this week timed to coincide with National Reconciliation week, which will examine the incoming Labor Government’s agenda on Aboriginal and Torres Strait Islander rights.

The panel will feature incoming Indigenous Affairs Minister Linda Burney, who is also from the Wiradjuri nation, and Gail Mabo, daughter of Meriam land rights giant Eddie Koiki Mabo, whose historic victory on behalf of traditional owners in the Torres Strait was won in the High Court 30 years ago this week.

Labor’s commitment to the Uluru Statement will be among topics for discussion, along with the Mabo anniversary, Australia’s change in political leadership, and what it could mean for the nation’s media landscape.

Grant spoke to a number of these issues at the recent Royal Australian and New Zealand College of Psychiatrists Congress in Sydney, in an impassioned and eloquent keynote reflecting on the scars of colonisation.

Dr Amy Coopes was there for the Croakey Conference News Service and filed this report.

When Stan Grant was 15, he was among a small group of Aboriginal boys at his outback New South Wales school who were summoned to the principal’s office and instructed to drop out because they would “amount to nothing” in a world where whiteness was the status quo.

Grant, a descendant of the Wiradjuri and Kamilaroi nations who also has Irish heritage, recalls that one of his earliest memories is of sitting in the bath trying to scrub himself raw after a classmate asked him why he was ‘so black’, and he recognised “we were not like other people”.

“I have had to explain myself my whole life.”

Delivering his opening keynote at the recent Royal Australian and New Zealand College of Psychiatrists’ annual Congress, Grant – a celebrated reporter, broadcaster and commentator – reflected on the profound impacts, “written on the bodies” of Aboriginal and Torres Strait Islander people, of a colonialist discourse positioning them as ‘other’.

“How do we live in a country where our presence has long been seen as something hostile, to be erased?” he said, describing himself as “exist(ing) in the eye of the white beholder”, in a world where freedom, liberty and normality looked white.

“Blackness is personified by our relationship to power,” he added. “In Australia, as an Aboriginal person, our lack of power means we are undoubtedly black.”

Grant’s own father, who authored Australia’s first Wiradjuri dictionary, was once locked up for speaking his native language in the street.

Of the boys called into the principal’s office that day when he was a teen, only one had survived, Grant recalled. The others had been lost to alcohol, drugs, prison and “all too often an early death”.

When he started out as a reporter, Grant said there was “no one who looked like me” in the Australian media and the ultimate compliment was to be described as a ‘white man’ who was ‘not like the others’.

Grant said his success appeared to be measured by his ability to disappear as an Aboriginal person, to “become more white”, where “obtaining everything promised by this country means I lose who I am”.

Rather than progressing on this front, Grant said the media – including his employer the ABC – continued to fall short on elevating Aboriginal and Torres Strait Islander voices, pointing to his own presence on screen as evidence of an ongoing tokenistic exceptionalism.

He took aim at the media’s framing of stories involving race, giving the recent Buffalo shootings as an example. Instead of describing the acts as the product of racist hatred, Grant said the dominant narrative put the onus on the victims, who were ‘shot because of the colour of their skin’.

“Race is the child of racism, not the other way around,” said Grant. “Racism creates the idea of race: like witchcraft, its power comes from our ability to believe.”

He likened the promise of liberal democracy for Aboriginal and Torres Strait Islander people to “waiting for Sleeping Beauty to wake”, with no treaty, political voice or recognition more than two centuries on from invasion.

“I don’t want to make myself a man of the past, I know what the past can do,” said Grant. “And yet we have to confront our past, we can’t erase it. It lives in us.”

Instead of allyship, Grant called for atonement and accountability, a process of true reckoning which recognised the long, proud Indigenous tradition of meeting the worst of the world and its interrogations of their worth with “unending, enduring love”.

Grant said he saw this reflected in the grace of the Uluru Statement, and in his parents, “old Aboriginal people” who – now in their 80s – had far outlived their life expectancy by “holding each other against the world with a love the country can’t break”.

After years of “dragging my history around with me”, which Grant said took “an enormous toll”, he decided to leave Australia – a “foreign country, for other people” where he never felt he belonged – to travel the world.

“I felt a great sense of liberation, freed from the history of this country and what it does to us, written on our bodies,” he said.

Overseas, reporting on the legacies of “colonisation, empire, dictators and despots, kings appointed by foreign powers”, he recognised in oppressed people, “positioned on the other side of history”, a familiar grief where “only the afflicted know the truth”.

“I saw the eyes of my own family, people for whom all certainty had been removed, who couldn’t believe in the promise of Western liberalism and all it purported to deliver,” he said.

Grant said democracy bent ever-increasingly towards tyranny, citing an “almost ungovernable” United States where “inequality [is] eating democracy alive like a cancer” and Martin Luther King Jr’s dream was far from being realised, with “injustice perpetuated time and time again”.

In Australia, he said record numbers of people were turning away from politics in the search for answers; crying out for leadership and being offered managers in response.

Despite this, Grant said he still believed democracy offered the only real hope of speaking back against oppression, racism and discrimination, invoking the Wiradjuri concept of yindyamarra winhanganha – living with respect in a world worth living in.

He reflected on the cumulative trauma of growing up Aboriginal in Australia, culminating for him in a breakdown whilst posted overseas with an “irrepressible surging wave” to end his life.

“I know what it is like to feel you have lost all hope,” he said, detailing the struggle to keep from being “poisoned by hatred, resentment and vengeance”.

He said Aboriginal and Torres Strait Islander peoples continued to experience a burden of mental illness far beyond that seen in the broader population, with suicide rates up to five times higher and a 10-year mortality gap.

“We are the most impoverished and imprisoned people in the country,” said Grant. “We talk a lot about intergenerational trauma and yes, that is a reality for many of us.”

‘Standing on my land’

Grant also spoke at a symposium at the Congress on the work of Dr Frantz Fanon, a French West Indian psychiatrist and political philosopher whose writings were very influential in the decolonisation movement.

Fanon built on and contested some of the earlier thinking on colonisation, including from Freud, arguing that violence was inherent to its aims, along with inferiority and dependency, the legacy of which lingered in discourses of colonised nations long after the invading act.

Dr Sally Swartz from South Africa’s Cape Town University said Fanon’s writing was a “call to action against oppressive regimes and the experience of being diminished in the eyes of the other”.

His political ideas informed his clinical practice, and he advocated for clinicians to think culturally while avoiding ‘otherness’, Swartz added.

Dr Steven Knoblauch, from New York University, said it was important to recognise that racial trauma was an embodied experience, and that skin colour shaped a person’s sense of place and hierarchical value.

Grant related his own experiences of healing through therapy and medication, both of which helped, he said, but was nowhere near as therapeutic as “standing on my land”.

Dr Kathomi Gatwiri closed the session with a reference to Ubuntu philosophy, which sees an individual’s humanity as inextricably tied to and affirmed by recognising the humanity of others.

“I am because we are; and because you are, therefore, I am.” 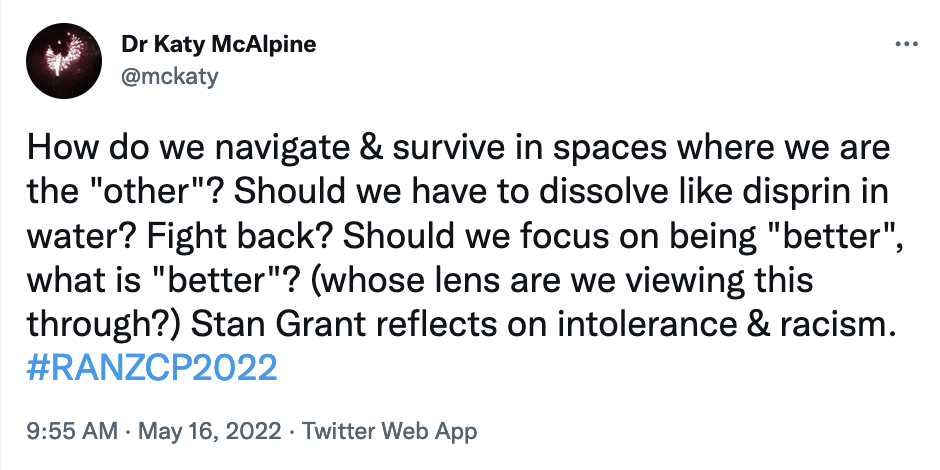 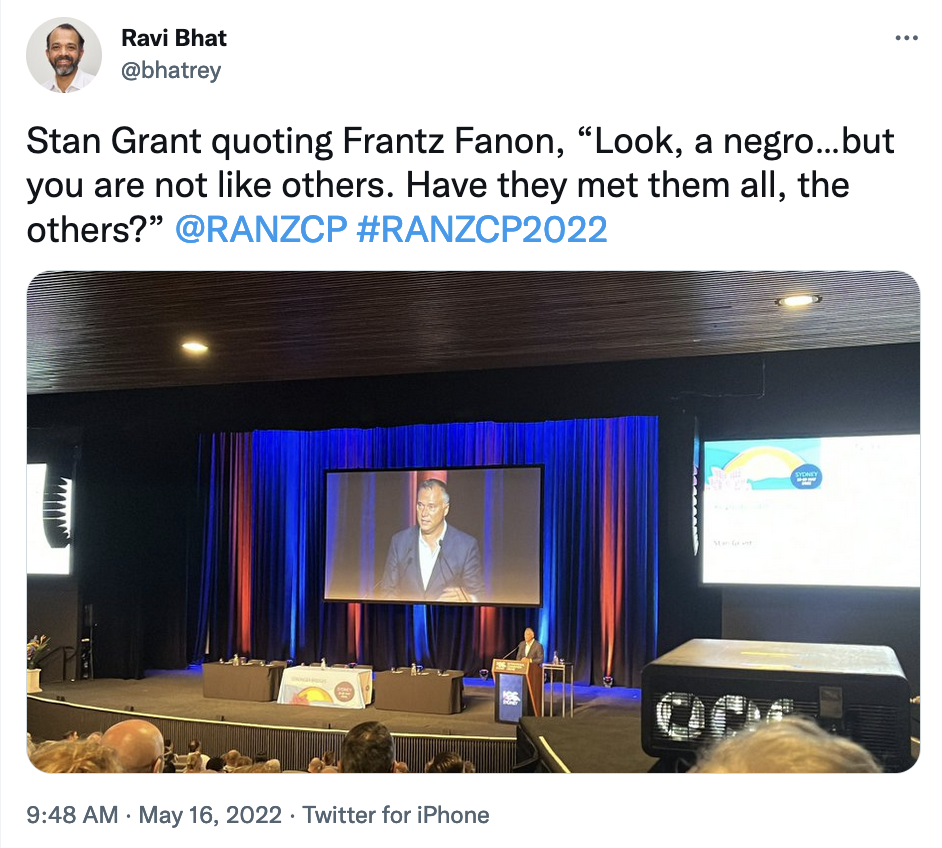 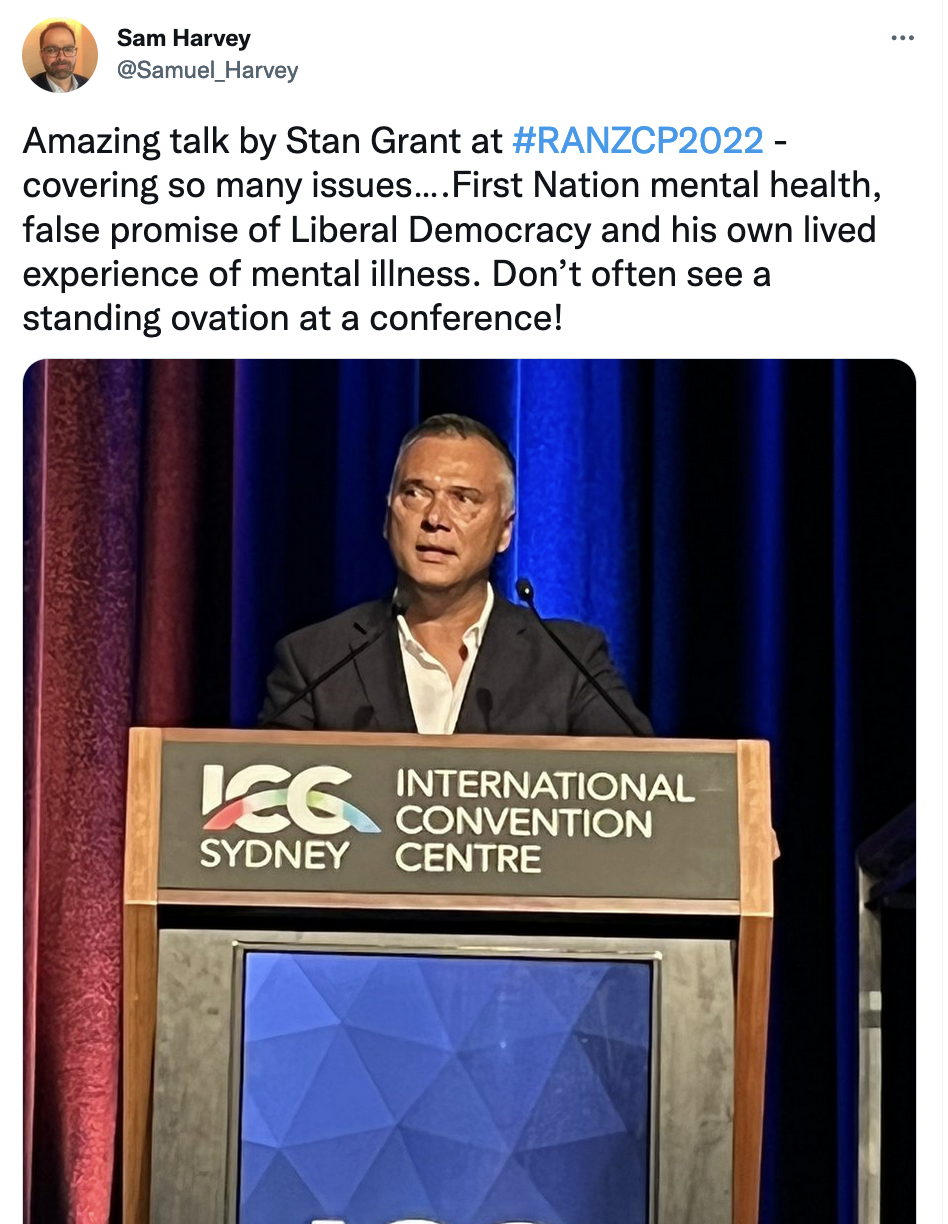 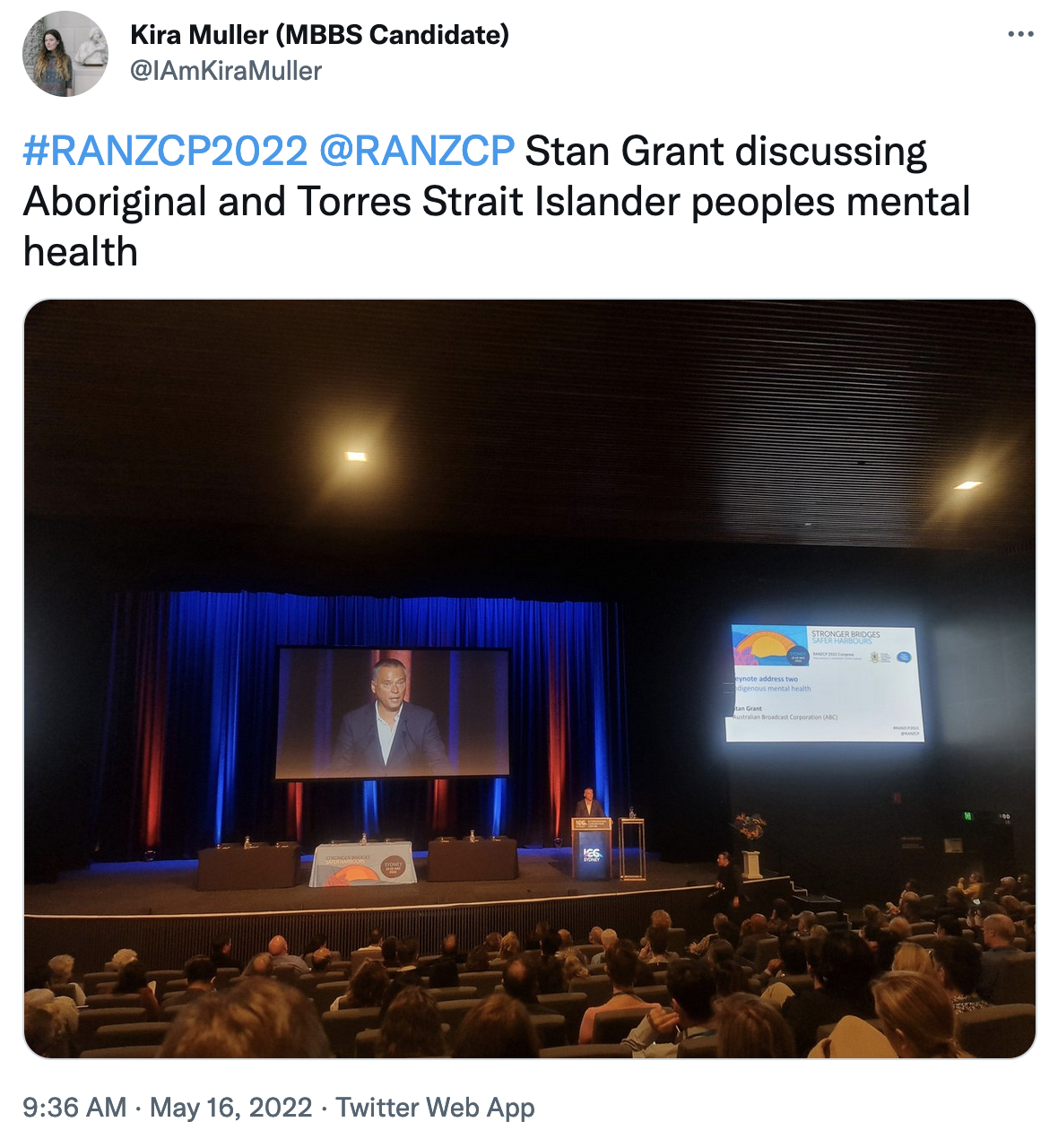 PrevPreviousIn case you missed it…a new government gets to work, media matters, environmental health, and plenty more too
NextMemo to Minister Mark Butler and colleagues: your to-do list is packedNext