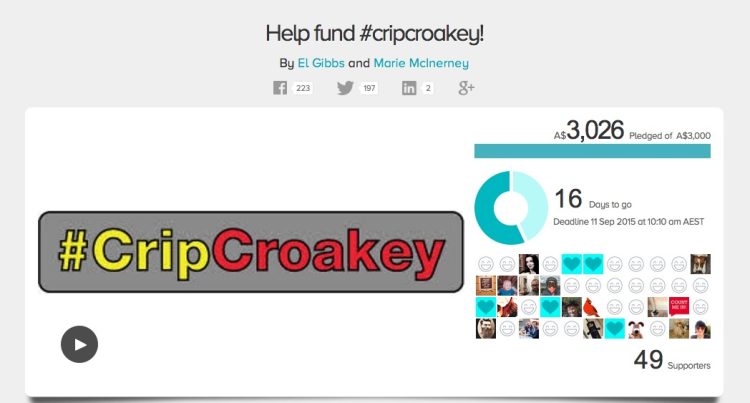 You want to mess with the NDIS? Get ready for a fight

The #CripCroakey crowdfunding project has reached its target of $3,000, enabling award-winning writer El Gibbs to research a series of articles around disability and health.

The campaign runs until 11 September – so there is still plenty of time to donate.

The more funds that are raised, the more stories Gibbs will be able to write. If you follow her on Twitter (@bluntshovels), you will know that there are many pressing issues to cover.

Below is an article cross-posted from Gibbs’s Blunt Shovels blog, in which she warns policymakers: DON’T MESS WITH THE NDIS.

Reports of a threat to the NDIS appeared recently, with Laura Tingle reporting fights in the federal government about the details of the full roll out.

The so-called Expenditure Review Committee is worried about the NDIS with “the nascent scheme a constant source of angst within the cash-strapped government.” Tingle mentioned that “the complexity of the scheme meant that ERC ministers have to constantly go back and refresh their minds about the genesis of the scheme.”

The genesis of the scheme – what was that again?

Oh yes, I remember. That would have been the Shut Out report, then theProductivity Commission hearings and report, and the Every Australian Counts campaign. The reports that so many people poured their heart and soul into. The ones that said that the NDIS was needed to stop a blow out in support costs, and to restore some basic rights and dignity to disabled Australians. Yes, that genesis.

And complexity? The NDIS is a market-driven system, where individuals are able to buy the supports they need in a competitive environment. Now, if that’s not right up a Coalition government’s alley, I don’t know what is. But just in case, here’s an explainer I prepared for the Treasurer earlier.

I know some politicians have had slightly dodgy memories of late, but forgetting their own commitments to the NDIS, or their own speeches in Parliament, or god forbid, their own election promises seems to be a bit of a stretch.

The August deadline for finalising the NDIS has been well known for months, with a myriad of groups anxiously awaiting the details so they can get started on planning for change. I know the Government is constantly lamenting the danger of ‘uncertainty’ for business, but what about for disabled people?

Because that’s the truth of it – the NDIS isn’t an abstract, costly, complicated idea for disabled people. It represents hope and the dream of real change. The NDIS contains so many promises that finally there might be enough; enough support, enough equipment, enough opportunities for a better life.

People around the country have been working on this in good faith – trying to trust that this was really going to come true, become a reality. This kind of report just says that all the good will, all the round tables, all the innovation, all the f***g work over the last few years is just treated as though it is nothing. As though everyone who worked so hard is nothing. As though the right to an independent, dignified life is nothing.

This has to stop. The NDIS is not some frightening cost explosion appearing on the horizon. Go back and read the Productivity Commission reports that map out what happens if the NDIS is not implemented. The NDIS is not welfare – disabled people have the right to go to work, get out of bed and have a f***g shower without having to beg for it, or be subjected to some kind of pity party.

And, as Tingle says, any changes to the NDIS “would raise howls of protest from the politically sensitive disability community.” Ha, you bloody bet it would.

The government barely has the political capital to keep going at the moment, let alone weather this shit storm.

That they could even consider taking on the NDIS says a great deal of how little they understand what it means to disabled people, or how hard people are willing to fight for it.

• Bookmark this link to track the #CripCroakey series.

PrevPreviousCalling for national action on discriminatory, unfair laws and systems #JustJustice
NextOne leader has stepped up to debate drug law reform. Will others?Next