YouCommNews, a website to enable members of the public to commission and fund journalistic investigations, will be launched at the NewNews conference in Melbourne today. The conference is being held by the Public Interest Journalist Foundation and Melbourne Writers Festival.

Associate Professor Heath Kelly, an expert on the epidemiology of influenza, explains below some of the background to the story he has pitched to YouCommNews.

His pitch asks for this question to be investigated: Did conflict of interest compromise the investigation of febrile convulsions in children following receipt of seasonal influenza vaccine in 2010?

On 22 April 2010 the Health Department of Western Australia (WA) took the unprecedented step of suspending a childhood immunisation program. Recognition of an unexpected increase in the number of febrile convulsions in children aged less than five years within 24 hours of receiving seasonal influenza vaccine prompted this action.

Beginning in 2008, WA had implemented a vaccine program aimed at immunising children aged less than 5 years old against influenza. This program acknowledged

Influenza vaccine coverage of 20-30% had been achieved in this age group since 2008.

The increase in febrile convulsions was first noted in WA because of the relatively higher vaccine coverage achieved in the existing childhood influenza vaccine program in that state.

The day following its suspension in WA, the childhood influenza vaccine campaign was suspended nationally.

Three months later the Commonwealth Department of Health and Aging acknowledged that it was only CSL vaccines, Fluvax and Fluvax Junior, that were associated with an excess of febrile convulsions, and not vaccines from other manufacturers. On 30 July the Department recommended the resumption of the influenza vaccine program for all children under 5 years, but advised using vaccines from manufacturers other than CSL. (http://www.healthemergency.gov.au/internet/healthemergency/publishing.nsf/content/health-swine_influenza-index.htm).

Around the time the program had been suspended in WA, the safety signal from the CSL vaccines had also been recognised by the Ministry of Health in New Zealand. The Ministry wrote to general practitioners on 27 April recommending them not to use the CSL vaccines for children but to continue using vaccines from other manufacturers (http://www.moh.govt.nz/moh.nsf/pagesmh/9164/$File/gp-fluvax-fax-apr2010.doc).

This sent the right message. There is no problem with influenza vaccines for children in general, but there is a problem with a specific vaccine from a specific manufacturer in one year.

But for three months the message in Australia remained much more confused.

The childhood influenza vaccination program was completely suspended for five weeks, until 1 June, after which time influenza vaccine was recommended for children younger than 5 years at increased risk of a poor outcome following infection. Vaccination was to be offered on a case by case basis, with the advice at the time being that the CSL vaccines were thought to be the main cause of the adverse events (https://www.health.gov.au/internet/main/publishing.nsf/Content/mr-yr10-dept-dept010610.htm).

In a report published online on 2 July 2010, the Therapeutics Goods Administration (TGA), the organisation responsible for licensing vaccines in Australia, concluded that the benefits of vaccinating children against influenza, including vaccination with the CSL manufactured vaccines, outweighed the risks. However no quantification of benefits was provided in a report which focused entirely on risks (http://www.tga.gov.au/alerts/medicines/fluvaccine-report100702.htm ).

As in other countries, influenza vaccines for use in Australia are licensed by the TGA based on studies that

Because influenza vaccines are produced annually, there is no opportunity for large scale population safety testing. Rare events will not be discovered before the vaccine is given to a significant number of people.

Years of experience with influenza vaccines support the assumption  that a good safety profile in the past will imply a good present and future safety profile, since the vaccine manufacturing process is the same each year. Probably for the first time in Australia, the events of 2010 showed this assumption not to be valid.

In addition to its vaccine licensing responsibilities, TGA is also responsible for collating data collected by the states on adverse events following immunisation (AEFI).  These potentially conflicting responsibilities – licensing vaccines as safe and investigating potential safety issues post-marketing – are separated in other countries.

TGA is in a potentially difficult position. It is an arm of government, with its own Act of Parliament, but is funded by industry on a cost recovery basis. TGA uses a different approach to the US and NZ of reconciling its potentially conflicting roles of regulator and safety monitor. It has been suggested that TGA separates these roles by having separate staff take responsibility for each of these activities.

This might sound alright in theory, but how well does it work in practice? This is just one of the questions arising from the investigation into the excess number of febrile convulsions following receipt of the CSL vaccines in 2010.

Another pertinent question is: Why did it take Australia more than three months to reach the same decision reached by New Zealand that the increased risk of febrile convulsions was likely to be associated only with the CSL vaccines? During this time Australian doctors could not use influenza vaccines from any manufacturer to vaccinate healthy children younger than 5 years.

The response to this episode has also raised questions about potential conflicts of interest between the experts providing advice to government and links with the pharmaceutical industry, as noted in a detailed investigation commissioned by the WA Minister for Health. (http://www.mediastatements.wa.gov.au/Pages/default.aspx?ItemId=133873)

The issue of conflicts of interest was explored at length earlier this year by the British Medical Journal (BMJ) in another context. A small number of the experts used by World Health Organization (WHO) to advise on management of the 2009 influenza pandemic had previously provided similar advice to industry. This seems entirely reasonable as everyone wants access to the experts. However the issue raised by the BMJ was whether the potential conflicts of interest of a few of these experts had been dealt with in the way proscribed by the WHO.

Similar questions about potential conflicts of interest have already been asked in Australia. However these questions, and the question about why it appeared to take so long for the Department of Health and Aging to identify the CSL manufactured vaccines as the likely cause of the excess febrile convulsions, have not yet been answered.

If you would like to see this investigation undertaken, visit YouCommNews and help support the story. 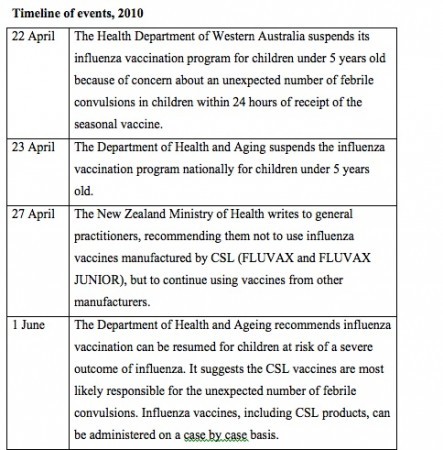 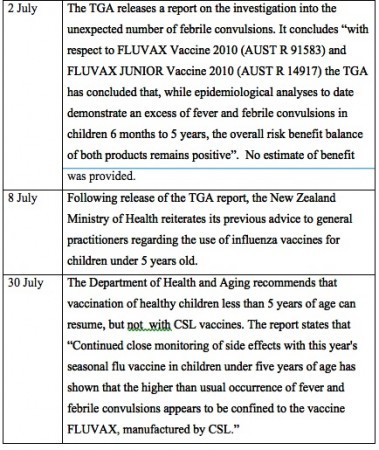