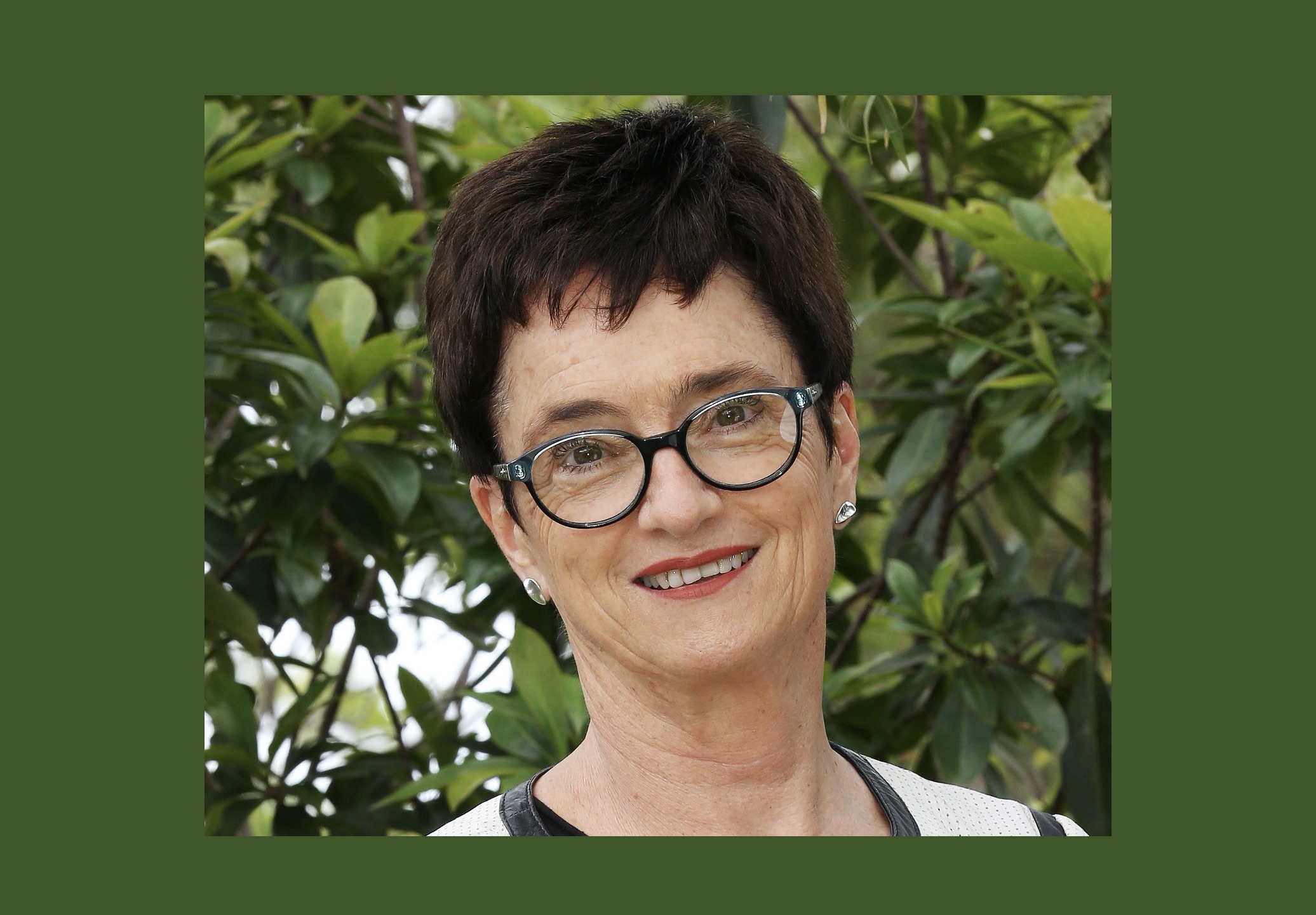 Young and old, together changing the future of aged care

This article was first published on Tuesday, October 25, 2022.

Geriatrician Professor Susan Kurrle will be awarded the 2022 Sidney Sax medal for outstanding contributions to the development and improvement of Australia’s healthcare system during a presentation in Canberra tomorrow evening (26 October) following the John Deeble Lecture.

The photo below was added to the post on 27 October. 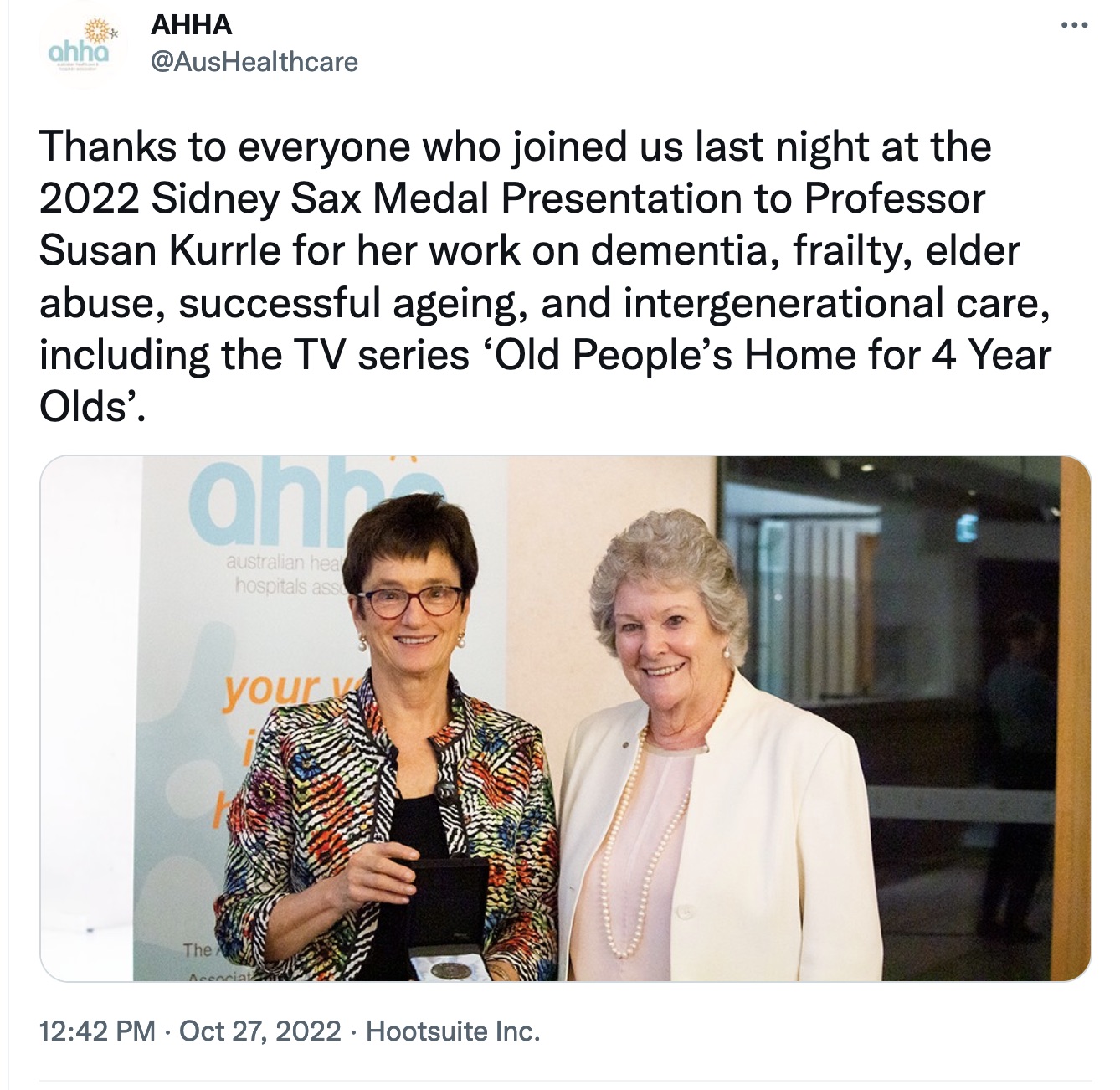 As a young medical student in the 1970s, Susan Kurrle had first-hand experience of the benefits of intergenerational care. Her grandmother, who had dementia, lived with and was cared for by the family in their Sydney home.

The benefits of bringing young and old together really hit home much more recently. In 2016, Kurrle was visiting her own mother in a residential aged care facility when she observed how the residents responded to her 18-month-old granddaughter Josephine.

Kurrle, a geriatrician, told Croakey that she was “really struck” by the effect of Josephine’s visit upon all the others in the facility.

“I thought, it’s not just dogs that should be going into these facilities, but kids,” Kurrle told Croakey.

Kurrle, the Curran Professor in Health Care of Older People at the Faculty of Medicine and Health at Sydney University, went on to fund a literature review of the impact of children visiting nursing homes, which found positive results in facilities where visits were taking place.

The result was a beautifully touching insight into connections between the old and the young.

“We all thought this would be a lovely thing to do”, recounts Kurrle, also citing evidence that the intervention could improve the older residents’ mobility and function and ease depression.

But even Kurrle was surprised by the way the young gravitated to the old, with the connections and interactions just happening. “It was magic,” she said.

Both young and old were visibly moved by the interactions, with the younger children acting as motivators to encourage their older friends in various activities, such as physical exercise.

The older participants were often viewed as alternative grandparents by the young children. For the teenagers – some battling lack of confidence and loneliness – they were seen as wise counsel and friends.

“We must try to make [intergenerational care] mainstream,” says Kurrle.

“We know it can make such a difference – as shown in the TV show – on quality of life, day-to-day function, and frailty. You can improve so much with older people with these programs.”

“Professor Kurrle’s work on the many aspects of care for older people is an area in need of champions who take a holistic approach to their health and well-being,” the AHHA Board Chair, Jillian Skinner, said in a statement.

Growing up on the grounds of The Kings School in Parramatta, where her father Stan Kurrle was headmaster, Kurrle says hers was a family where the generations mixed closely.

The children regularly spent the school holidays with their grandparents in Victoria and when their maternal grandmother was diagnosed with dementia, she came to Sydney to live with them.

Kurrle says exposure to dementia through her grandmother and later her mother meant she had experience of the degenerative condition for most of her life.

“That changes the way you look at an illness. I often think I ended up in geriatric medicine because of that exposure to these lovely older people and unwell older people.”

Kurrle says her three-generation family was doing intergenerational care way before it had a name, because that was how it was done and is still done in some cultures.

Having strong intergenerational connection was very important to Kurrle, who says her father and mother played an important role in her children’s lives.

“That exposure to multi-generational families really convinced me about intergenerational care and got me involved in ‘Old Folks Home for 4 Year Olds’ early on,” she says.

Kurrle believes both old and young can learn from each other and the spontaneity displayed by the young and older participants in the TV series showed these programs will work in ‘real life’.

The wonderful interactions seen during the show have continued. While some of the older participants have died, others have kept up the connection four years later, exchanging gifts and cards and some even visiting the families.

The teenage group recently reconnected with their older friends, and another series involving this age group has been commissioned for 2023 (Season 4).

For Kurrle, while the TV series has been successful in showing the benefits of improving quality of life, physical and mental health, it’s now time to try to do such programs in a ‘real life’ centre.

Kurrle would like to the Season 4 filmed in a Police Citizens Boys Clubs or YMCA, somewhere it could be sustainable in the long-term.

As for the three and four-year-old children, Kurrle is hoping a Playgroups NSW and Playgroups Victoria model called ‘Timeless Play’ – which was in place before COVID – will be rolled out again and extended to more aged care facilities.

“If you have community playgroup that would normally meet at a church hall or community centre but instead meets in a Residential Aged Care Facility, that’s very sustainable.”

On a personal level, Kurrle saw the joy her mother got from contact with her grandchildren and how – due to her memory loss – she had endless patience reading the same book to them repeatedly, much to their delight.

“I think on one occasion she read a book eight times. She wasn’t fussed and the kids thought it was great, so it was perfect.”

Kurrle says the glory of intergenerational care is finding ways to utilise the things older people can still do and that younger people, such as the teenagers in the ABC program, often are surprised at the skills of older people.

Aside from her intergenerational work, Kurrle has been co-designing services with general practices for several years, including the Geriatric Rapid Acute Care Evaluation or GRACE program, established in 2005 in the Northern Sydney Local Health District (NSLHD).

GRACE, a ground-breaking approach to helping treat older patients in the appropriate setting, be it the home, or aged care settings, rather than in emergency departments, has been adopted by many other Local Health Districts.

Kurrle says the service established a direct line of communication between residential care staff and NSLHD geriatricians and nurses, so they could raise concerns with geriatricians as they arose.

Within a year, they had reduced hospital admissions of older aged care residents and provided a kind of hospital-in-the-home in the facility (the program now also includes people living at home), and supplied the equipment needed to continue the care while also supporting the GP.

Kurrle is happy with the success of the award-winning program, praising it as a combined effort between GPs, the Primary Health Network, residential aged care facilities, directors of nursing and two older people who acted as ‘reality checkers’.

“It really does work but it should have done it 10 years earlier”, says Kurrle.

Exercise and staying engaged are critical to staying healthy as you age, explains Kurrle.

Pointing to her 93-year-old father-in-law who plays golf twice a week, and her father and mother, who moved to a farm in their 60s and worked it for 20 years, Kurrle says keeping active is crucial.

“Dad and mum had a purpose in life and just kept at it. Even though dad had a bit of a dicky heart, he and mum kept active,” she says.

When her mother’s dementia resulted in a move into residential aged care, the active 88-year-old was expelled from the first facility for repeatedly climbing over a 1.6-metre-high fence, Kurrle says with a smile.

Kurrle then arranged for her mother to go to another facility, which, like the first, used a cottage model of care with a small number of residents in each unit, built around an open plan, domestic kitchen and living area, and meals prepared by staff and residents. While secure, the second facility still allowed residents to wander outside whenever they wanted.

“It’s such a lovely model of care if you have dementia and need residential care,” says Kurrle.

On the Commonwealth level, Kurrle would like to see the Federal Government prioritise better pay for aged care staff and improved nutrition in residential aged care facilities

As recently highlighted in this SMH article, a Federal Government promise to boost aged care spending is just one of the fiscal challenges facing the Labor Government as it faces increasing pressures on its finances.

With the Fair Work Commission decision on a wage increase for aged care workers pending, Kurrle says a pay rise “will allow a better level of care for older people in residential care and the community”.

“However, making sure that it is the workers – and not the provider organisations – that get the money is important,” she says.

In 2021 the then Federal Government responded to concerns raised by the Aged Care Royal Commission by providing a $10 a day supplement to improve food but Kurrle says “we have no idea where that (money) has gone”.

In her ideal vision for aged care, Kurrle would like to see more intergenerational care and is currently working with colleagues on Medical Research Future Fund-financed research to refine the best kind of program for older people: be that one or two hours a week and the activities to include.

The research is being undertaken with a group of participants at St Nic’s Primary School in Coogee where the second series of ‘Old People’s Home for 4 Year Olds’ was filmed.

“This is part of ongoing research projects to gather the evidence to take to government and service providers to say this is a way to reduce frailty – you improve confidence and get people involved,” says Kurrle.

Kurrle says frailty is a particular concern in ageing, leading to falls and hospitalisations.

“Fifty percent of people drop out of exercise programs. Intergenerational care is one way – a sneaky way – of getting older people exercising. As we saw in both series, kids are amazing motivators.”