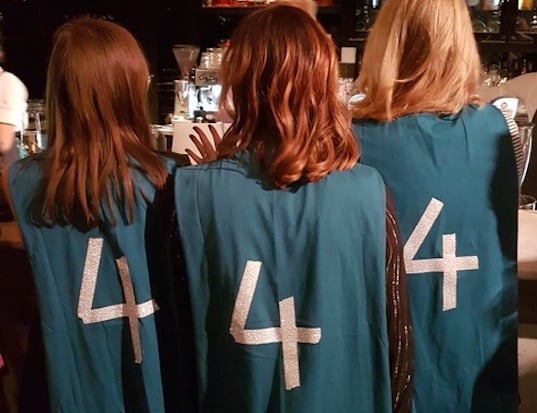 May the "Nurse 4s" be with you. Photo credit: Susan McInnes

Zap! Kapow! Meet the superheroes of #Nurseforce (and also some villains)

Superheroes and villains alike were on full display during the Australian Primary Health Care Nurses Association (APNA) 10th Annual National Conference that wrapped up in Brisbane over the weekend.

Clad in costumes and cloaks for the superhero-themed conference dinner, conference participants also demonstrated their virtual powers in having the conference hashtag #Nurseforce trending during much of the event.

The Nurseforce for the Future conference also had plenty of its own ‘everyday heroes’ to celebrate, to showcase the role of nurses and what they do in primary health care. See below for the winners and finalists of the Nurse of the Year and Emerging Nurse of the Year awards.

The final day of the conference fell on Saturday 12 May, International Nurses Day – held this year under the theme: Nurses: A voice to lead – Health is a Human Right, marked across the globe and on Twitter under a number of hashtags, including #IND2018. 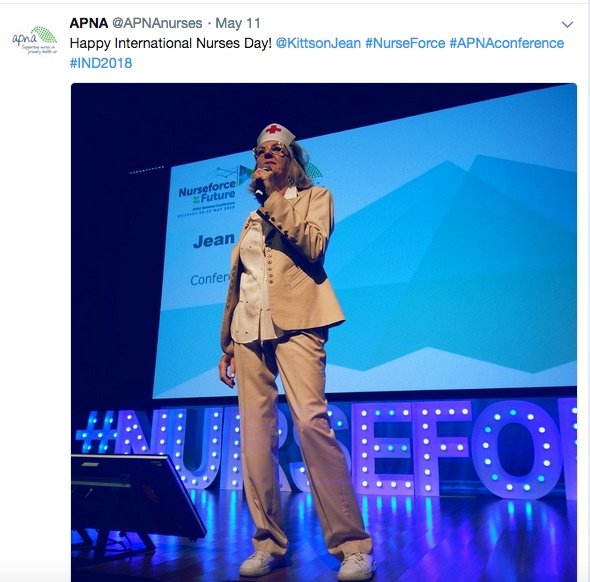 The Australian Nursing and Midwifery Federation marked the day by launching a new campaign about a staffing crisis in aged care.

The day marks the birthday of Florence Nightingale, a traditional superhero of nursing, though one whose legend is now being scrutinised for the harms caused by health professionals and systems in the past through colonial views towards Indigenous people.

As this earlier Croakey story reports, the Australian Nursing and Midwifery Federation (ANMF) is considering a call from the Congress of Aboriginal and Torres Strait Islander Nurses and Midwives (CATSINaM) for the profession to make a formal apology for its part in the harm inflicted by racist health policies and systems on Aboriginal and Torres Strait Islander people since colonisation.

Villains in the spotlight

Among the “villains” spotlighted during conference presentations and discussions were:

• The current fee for service payment model in the general practice – multiple sessions heard how it was not suited to true health care, particularly managing more complex conditions such as chronic disease, and inhibited what nurses can do.

• General practices that continue to downplay the role and capacity of primary health care nurses – one delegate told of the staff meeting where nurses were told their job was to “service the doctors”. Another said that practice nurses so often did the hard work with patients, which doctors were then able to claim from Medicare and then “drive off in the BMW”.

• Ongoing perceptions within the nursing profession itself that primary health care nursing represents “a soft option” versus acute hospital nursing – with most nursing courses still barely touching on practice nursing as a skill and opportunity.

And some medical ‘screen heroes’ also took a beating in a fantastic keynote from registered nurse Robbie Bedbrook, a nursing social media star known as Nurse Robbie through his Hot on Health YouTube channel.

He railed against the lack of representation of nursing in the media, particularly in hit medical dramas like Grey’s Anatomy.

“It is infuriating,” he said. “You’re likely not seeing a nurse on the screen or, if you are, they’re fuzzy in the background, drinking coffee and gossiping, having a great time.”

Of the 20 or so lead characters on Grey’s Anatomy, set in a hospital in Seattle, all were doctors and physicians, and there was not a single nurse. This was poor representation, he said, given that nurses make up the greatest number of people in the health workforce.

“The only nurse character I can remember gave everybody syphilis!” he said to much laughter, as he recounted the glorification of doctors and what they would do for their patients in the long-running drama.

Bedbrook said Australian medical drama All Saints, set in the fictional All Saints Western General Hospital, did at least have a lead character who was a nurse, he said, but she was “two dimensional – very matronly, no nonsense…”

And then when there was a show centred around a nurse, it was Nurse Jackie, a comedy series billed as: “Emergency room nurse Jackie Peyton does everything she can to provide her patients with the best care possible while navigating the waters of a crumbling health-care system. But she has a secret that is increasingly difficult to keep from people — she relies on Vicodin and Adderall to get her through high-stress shifts…”

There was much laughter but he said there was a serious side for professions, as for other groups who are sidelined or invisible in the media.

“We’re not represented here, and the message is very clear: if you don’t see yourself represented, (the message is) you don’t matter. And that is rubbish because nurses do matter, we are fundamental to a health system that works.” 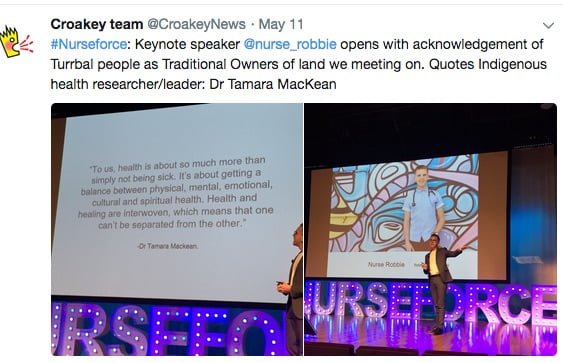 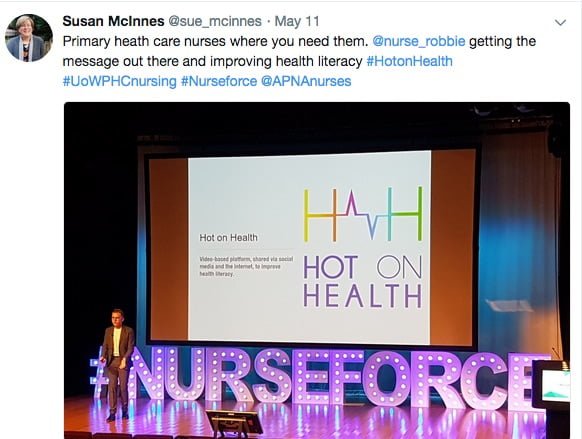 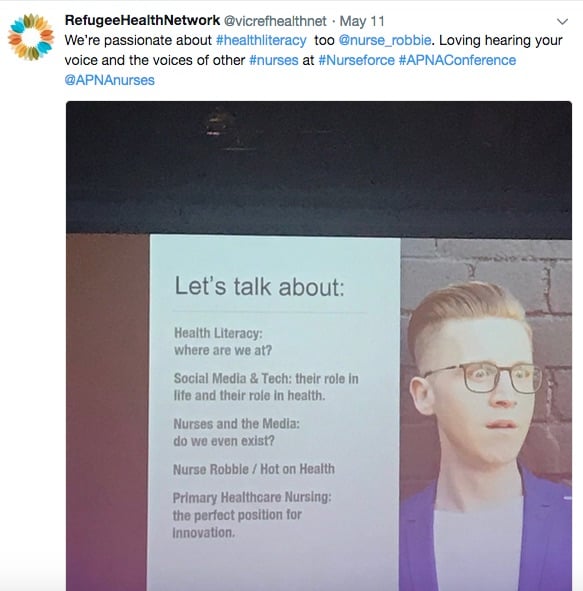 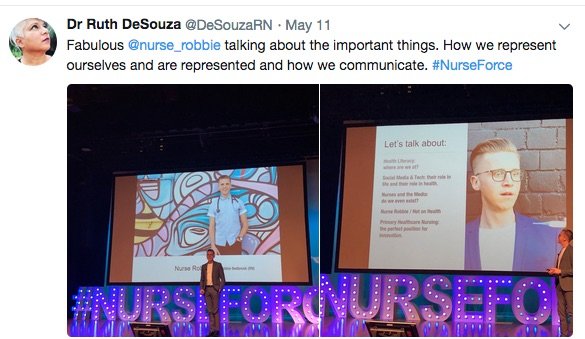 The 2018 Nurse of the Year award was won by Melbourne registered nurse Cathy Carrasco, who works at the Carnegie Medical Centre in Melbourne. APNA highlighted the comprehensive system she has developed for ensuring that care plans, care plan reviews and home health assessments are “carried out with clockwork regularity”.

The award also recognised her work to involve her clinic in two studies – Anxiety in Older Adults through Monash University and the Cancer Screening in General Practice facilitated by the Victorian Cancer Council.

Carrrasco told Croakey that she was passionate about the in-home assessments she carried out, which were able to reveal far more about the health and wellbeing of elderly patients particularly than when they came into the practice for a consultation.

“People can present very well in the clinic…(but) going out into homes, you can have a look into the fridge and see if they have any food, see how clean their house is, see the relationship with neighbours, if they’re lonely,” she said. “There’s a lot more (understanding) that can come out from seeing them in their home.”

Carrrasco said she was lucky that the GPs she works for give her a lot of autonomy. “They have said to take the job in the direction you want to take it,” she said.

Her colleague, Mary Reynolds, from the South East Melbourne Primary Health Network, said the benefits for such autonomy and respect for nursing practice cut many ways, with strong evidence that many patients disclose more to nurses than to their GPs.

“The nurses can take the time – usually –  to help sort that out, and also to realise that’s the barrier so to have the trust of your GPs as Cathy has got to be able to run with it makes a huge difference on patient care,” she said.

Asked what message she would send to Health Minister Greg Hunt, who noted in a video presentation to the conference that both his mother and wife were nurses, Carrasco said – heralding a recurrent theme at the conference:

“It would be really nice if we could bill directly to Medicare ourselves, and just have a bit more recognition that way.”

Other finalists for the awards were:

• Caroline Gibson for leading the creation of the Memory Health Support Service, a Nurse Clinic that looks to support patients to talk about cognitive issues sooner and be better prepared for the future. (Croakey will report on this clinic in coming days).

• Margaret Crowly, whose leadership saw the Dubbo Sexual Health Clinic beecome the first in New South Wales to partner with the Gender Centre to provide support to transgender and gender-diverse clients, and led to another clinic in Orange earlier this year. 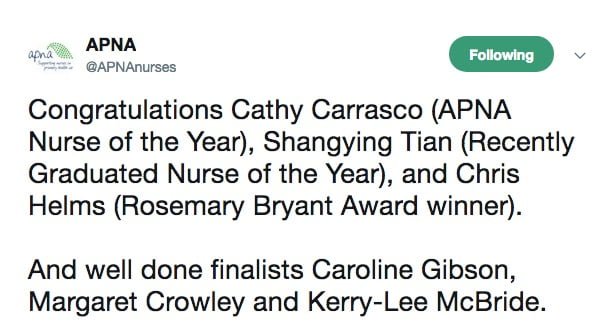 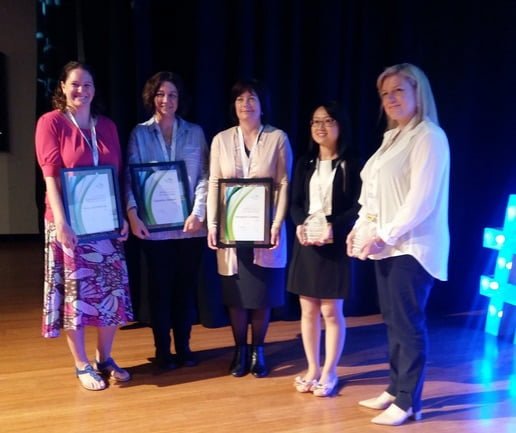 As the caped and costumed #Nurseforce participants made their entrances, one rallying cry was: “Who you gonna call? Wound busters…” 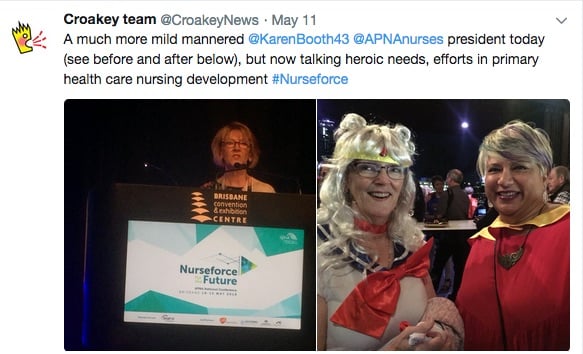 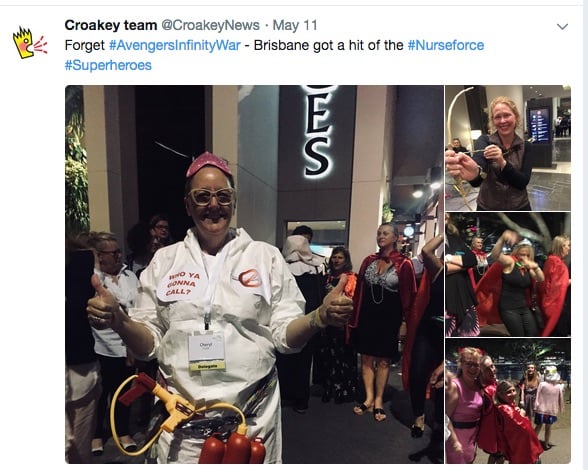 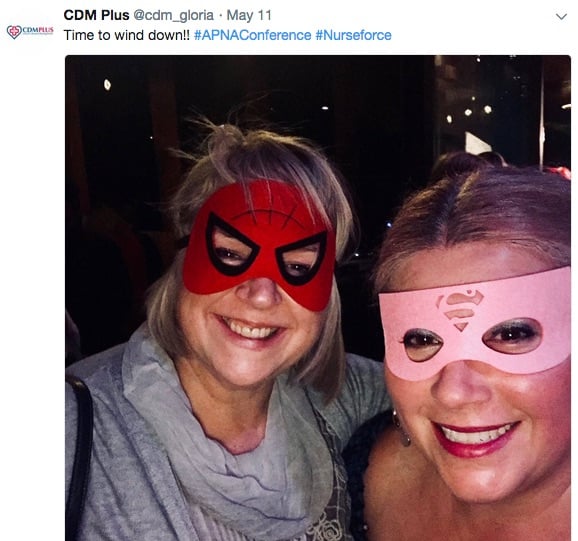 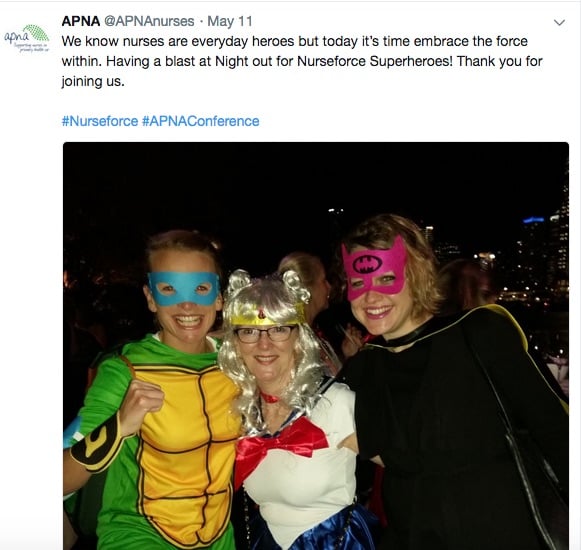 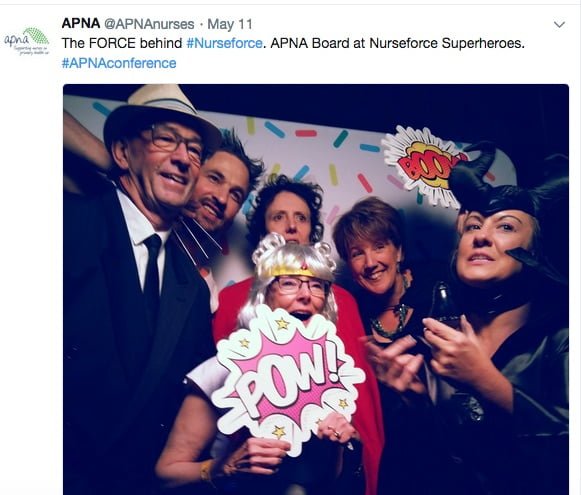 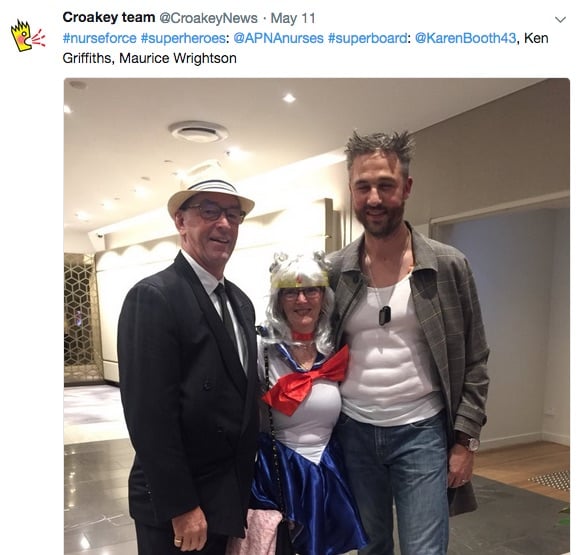 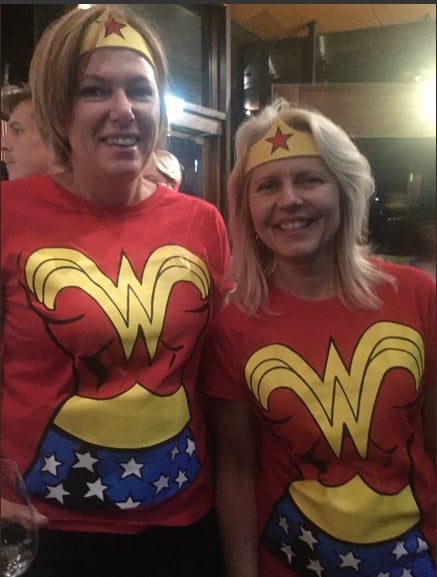 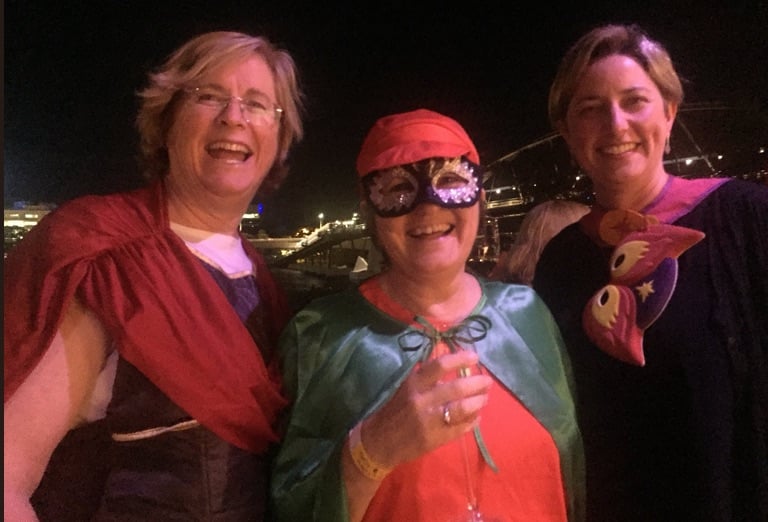 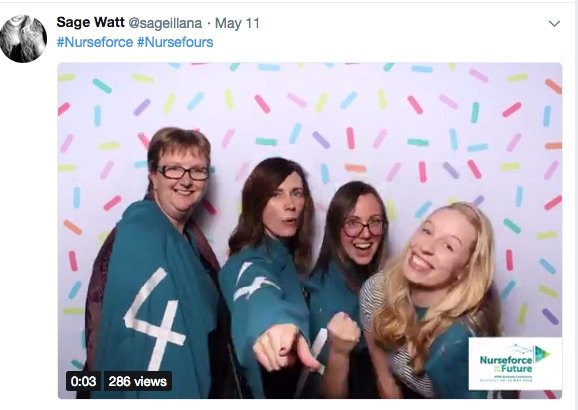 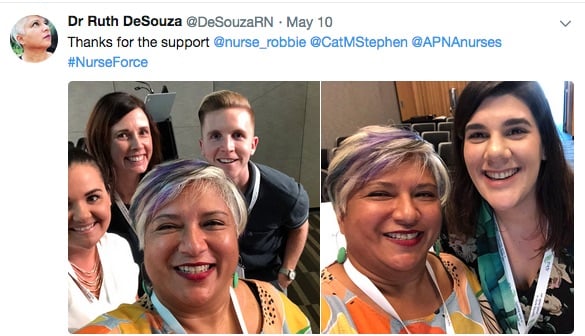 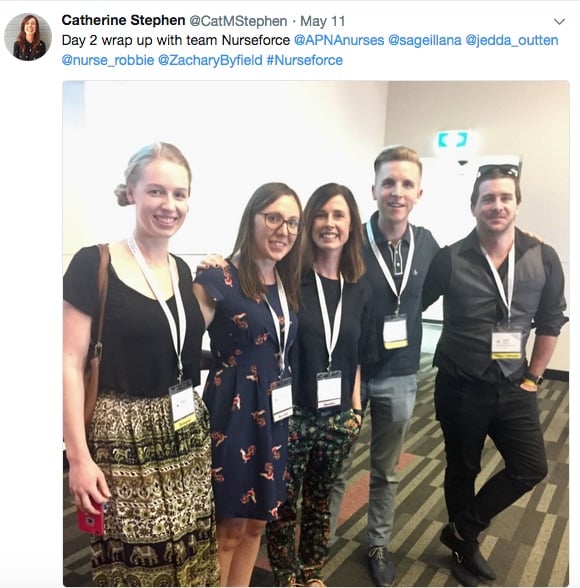 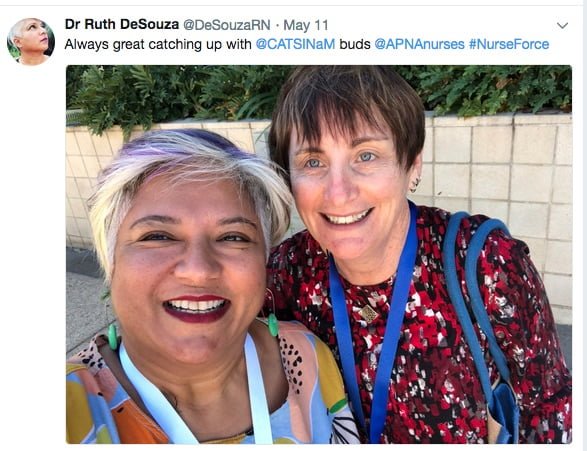 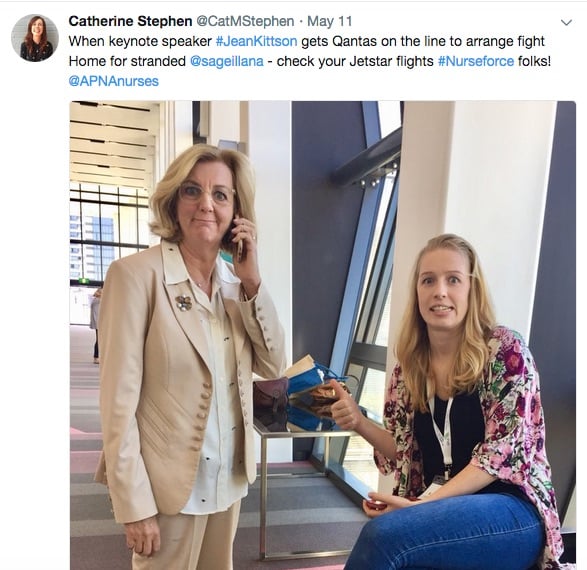 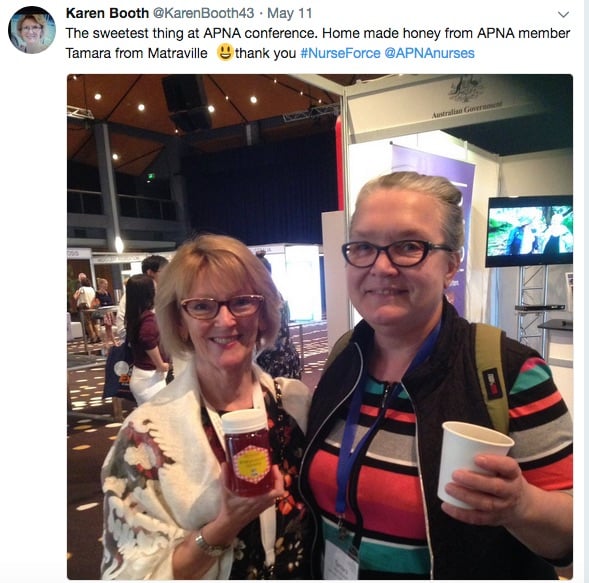 Warm thanks to all #Nurseforce tweeps – see what you did! 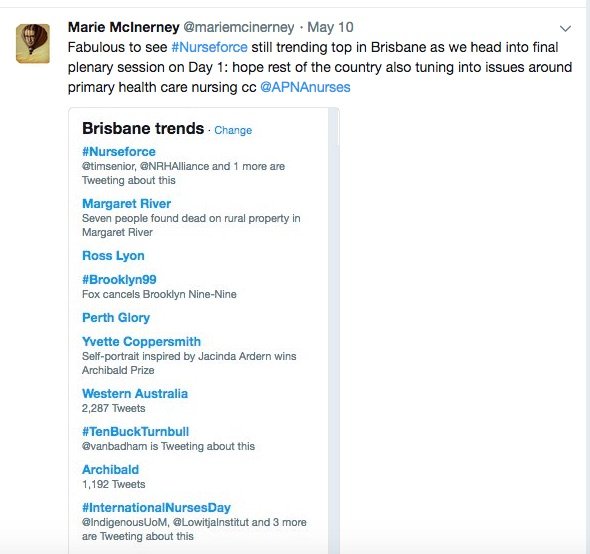