Tax reform promises focus not just on how much, but how revenue raised, while Budget cuts still major concern

Among other measures, the paper advocates broadening the GST and reducing income and company taxes,  along with a crackdown on superannuation tax concessions that have been described as a “tax haven” for the wealthy.

Unlike the harsh measures doled out in the last Federal Budget, this paper looks past issues of spending to the question of revenue – of what we need in order to deliver the services we want. It notes the focus should be “on how revenue is raised, not just how much” and that the government’s goal is to deliver “lower, simpler, fairer taxes.”

Therefore it’s crucial to spending on health and welfare in future and to issues of equity, and maybe would have been a more helpful and productive first step than the 2014 Commission of Audit.

We are unlikely to see any major revenue reform in this coming 2015-16 Budget, but the Federal Government is calling for submissions to the discussion paper by 1 June. A green (options) paper will be released towards the end of the year, with a white paper due in 2016, ahead of the next election, to spell out the government’s reform proposals. Here’s information on lodging a submission.

See below for some of the reactions so far to the paper.

But first: last week saw the reversal of funding cuts to community legal centres, but there is continuing concern about the impact on cuts from the 2014-15 Budget.

A coalition of 11 peak organisations from the health and community sectors is calling on the Government to also scrap plans to cut nearly $200 million in funding to key health initiatives from the end of the financial year. They say the cuts would reduce the capacity of non-government organisations and peak bodies to deliver services across the country and to provide advice and support for reform in health:

“The 2014-15 Budget Papers indicate that $197.1M will be cut from the ‘Health Flexible Funds’ over 3 years from 2015-16 to 2017-18.  There is still no clarity in relation to how these savings are to be achieved, with existing funding contracts for many NGOs set to expire on 30 June 2015.  Among the 16 Flexible Funds apparently to be affected are those supporting the provision of essential services in rural, regional and remote Australia; working to Close the Gap in health outcomes for Indigenous Australians; managing vital responses to communicable diseases; and delivering substance use treatment services around the country.  Obviously it’s of great concern to all the services and organisations potentially affected,” explained Michael Moore, Chief Executive Officer (CEO) of the Public Health Association of Australia (PHAA).

“Any cuts to the Health Flexible Funds will just put more barriers in place for Aboriginal people to access essential health programs and services.  We are particularly concerned about the future of the Close the Gap Indigenous Chronic Disease package, which aims to prevent chronic disease including GP services, medications and tackling smoking.  The new Primary Health Networks will not be able to pick these critical programs up as they have barely been established yet,” said Lisa Briggs, CEO of the National Aboriginal Community Controlled Health Organisation (NACCHO).

Suicide Prevention Australia today also released a statement, warning that funding for vital work to respond to and prevent suicide in communities across Australia is currently due to end 30 June 2015.It called on the government to confirm funding arrangements as a matter of urgency, saying uncertainty is cause “deep unease in the sector”. It said:

The existing uncertainty is hindering the ability of the sector to provide support to those touched by suicide. Vulnerable individuals are at risk of losing their support networks and access to quality services. The statistics released today emphasise the critical importance of sustained suicide prevention funding.”

Read the full statement and see this previous warning from mental health specialist John Mendoza of the risks of harsh measures on young people.

Also the Federal Opposition is urging Indigenous service providers to make submissions to the Senate Inquiry into the Abbott Government’s Indigenous grants tendering processes. It said:

Just six weeks out from the Abbott Government’s second Budget, there are still very few details about these savage cuts, how much funding has been provided for Indigenous programs and how much funding remains.

The Senate Inquiry will investigate where the cuts have fallen by region and service type, particularly where it is uncertain replacement services will be made available.

Submissions close on the 30 April 2015 with the Finance and Public Administration References Committee to report by 18 June 2015.

Here are some speeches and Q&As on tax reform from Treasurer Joe Hockey, who presented to both the Australian Council of Social Service (ACOSS) and the conservative think tank Institute of Public Affairs (IPA) in the first 24 hours of the tax reform paper’s life.

A compilation of reactions from The Conversation, and more analysis.

“The worthwhile ideas are straight out of 1974”: John Quiggan in Guardian Australia. 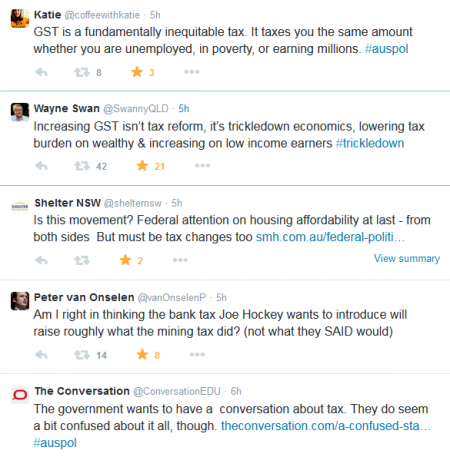 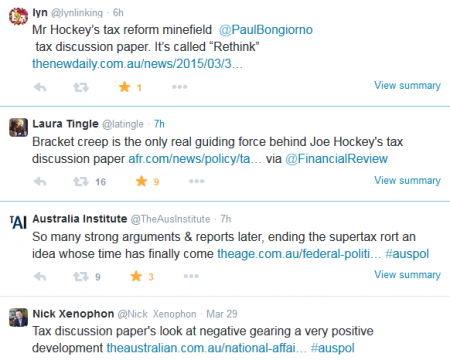 PrevPreviousQ&A: What can we learn from the US Choosing Wisely campaign to cut down unnecessary tests, treatment?
NextHow GPs balance the dilemmas of prostate testing: study resultsNext