A poet, schizophrenia and a compelling tale

Sandy Jeffs is an award winning poet who has recently released a memoir, Flying with Paper Wings, which, amongst other things, tells her story of living with schizophrenia.

Here she shares with Croakey readers some of the background to the book and her writing of it:

“Flying with Paper Wings is a story of survival. It begins in Ballarat of the 1950s and 60s with painful childhood memories. Sitting in my mind’s eye is the image of my drunken mother, slumped in the passage, bruised and battered, after a beating from my raging father.

Although I shared with my older brother and sister the fear that one day my father would kill my mother, or that she would commit suicide as she so often threatened, the three of us rarely spoke of the constant horror, never daring to share it in or outside our small Ballarat home.

After leaving home, I stumbled through university, graduating in 1975, only to be diagnosed with schizophrenia in 1976.

My fall into madness was catastrophic. Suddenly the person I thought I was became a stranger. With each psychotic episode I went further into the mire of madness. Depression also held me in its sway.

My struggle with madness has been long and arduous. Flying with Paper Wings documents this in detail. My poetry has been a potent force in countering the debilitating effects of my schizophrenia.

In writing about my madness, I have turned disaster into celebration. Poetry gave me back an identity which had been stripped away with the onset of my schizophrenia. The book is also a celebration of friendship.

A decade ago, I decided to retrieve the records of my admissions to mental institutions. It prompted me to begin writing my story – of being drawn into the underworld of madness and returning to tell the tale.

In its telling, I seek self-understanding, but also to discover to what extent nature or nurture are implicated in my  illness, how an ill-formed and fracturing identity can be rebuilt, and how, as a society, we might better treat the mentally ill.

This was a painful and confronting book to write because to see my life on the page, warts and all, left me wondering: why have I revealed so much of myself?

We all have our story to tell and perhaps by me telling my story someone else may be inspired to tell their story too. I wrote the book because I wanted to understand better the life events that have shaped me; to trawl the foul, murky world of my voices; to understand my wildly fanciful delusions.

At the heart of the book is the little girl who watched her parents fight; who experienced her own sexual assault; who left home with a hope for a better life, who flirted with Catholicism to nourish her soul; who fell into the dungeons of madness – she is desperately trying to make sense of these huge life events.

Melbourne writer, Helen Elliot, describes Flying with Paper Wings as ‘anything but a misery memoir. Glittering with black humour and without self-pity, it shifts other people’s perceptions of mental distress beyond kindness, compassion, sympathy and fear into some deeper perception.’” 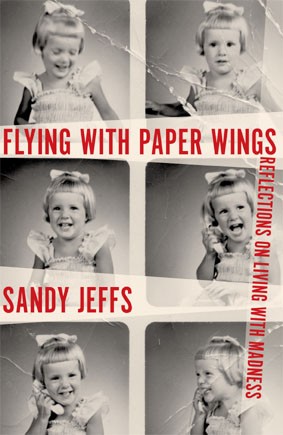 Flying with Paper Wings is published by Vulgar Press and can be bought from Sane Australia ($33) by visiting here or by ringing 03 9682 5933. It has been warmly endorsed by Anne Deveson and Andrew Denton.

PrevPreviousRegulation works: a postcard from France
NextThere is more to the GP super clinic story than you might have heardNext