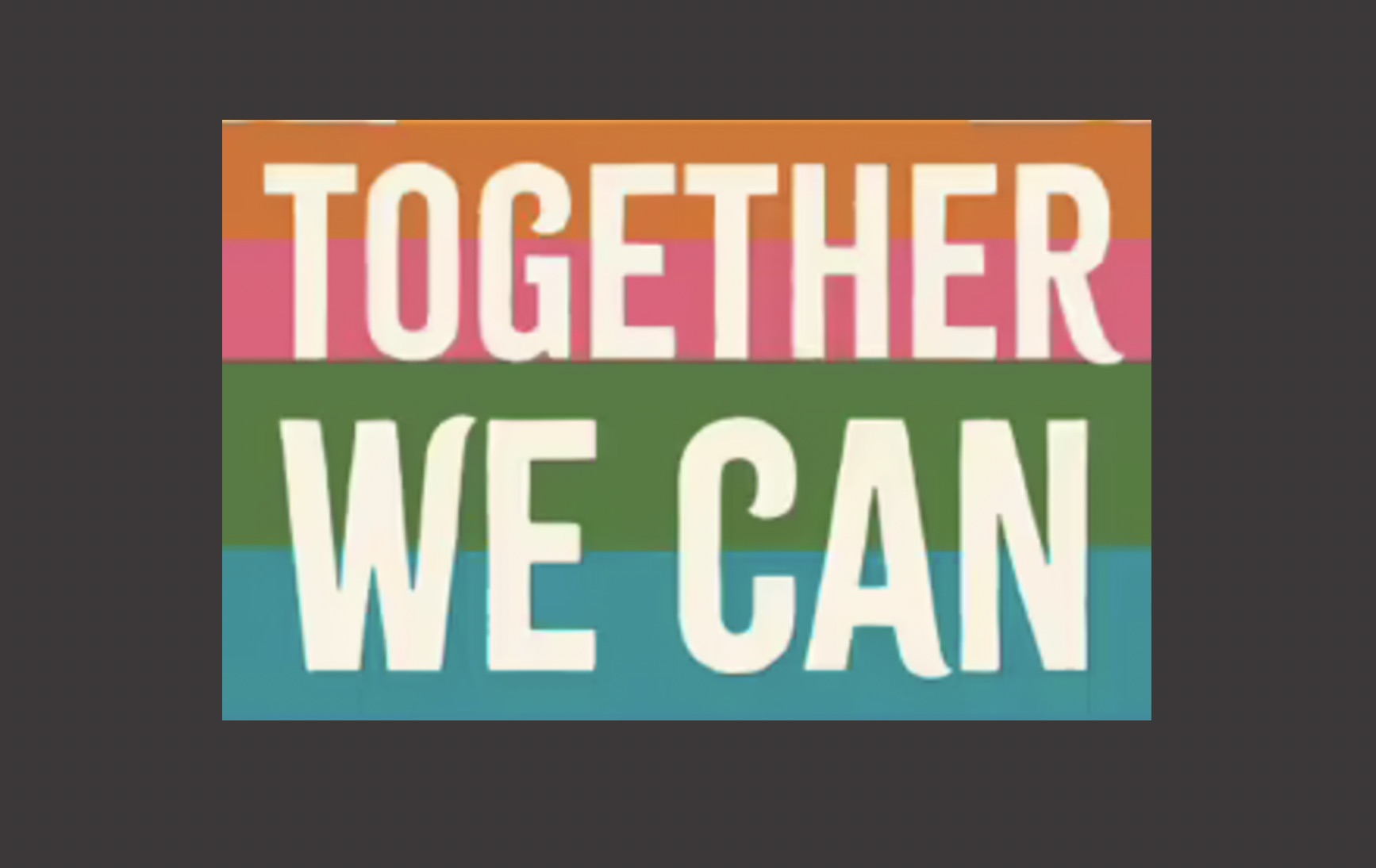 Detail from the cover of a new book by Claire O'Rourke

Amid so much depressing climate news, here’s a new book to inspire healthy climate action

This article was first published on Wednesday, September 7, 2022

Introduction by Croakey: The latest annual global report on the state of the climate shows that the dominant greenhouse gases released into Earth’s atmosphere continued to increase in 2021, with the increase in annual global average carbon dioxide concentration being the fifth-highest growth rate since 1958 when instrumental records began.

Nor does the latest accounting of Australia’s greenhouse gas emissions give any cause for celebration. Digging into the findings for The Guardian, Adam Morton says they show “that the hard work to transform the economy has barely begun”.

Meanwhile, fossil fuel subsidies from major economies including Australia reached close to US$700 billion in 2021, almost doubling from 2020, according to new analysis by the International Energy Agency and OECD reported at The Conversation.

In the 2021-22 budget period, Australian federal and state governments’ total fossil fuel subsidies are estimated to have cost A$11.6 billion – a $1.3 billion increase on the previous year – writes Adjunct Professor Richard Denniss, executive director of The Australia Institute.

The unending bad news on climate can be overwhelming and enervating. However, a new book, Together We Can, seeks to help people and communities move beyond being “climate freaked-out” to connecting up and taking collective action.

The book is billed as “an invitation to anyone worried about what climate change means for our future and a challenge to reconnect with our communities. You can start small and simple and, before you know it, climate action is transformative, empowering and hopeful.”

Author Claire O’Rourke, a campaigner, communicator, partner and parent who works as Energy Transformation Program Co-Director at The Sunrise Project, tells the stories of First Nations peoples and others around Australia who are making a difference across diverse fields including food production, healthcare, business, farming and science.

A former journalist who also volunteers her time as a director of Croakey Health Media, O’Rourke recently took the reins of Croakey’s @WePublicHealth account during a week when she also presented at the National Landcare Conference and Byron Bay Writers festival.

Her tweets, summarised below, highlight some of the co-benefits for health of climate action and also identify some “eco-emotions” that may ring bells for many readers.

I will mainly focus on the intersection of climate change and mental health – but the conversation is much broader when it comes to public health and climate.

I’m at the Landcare Australia Conference on Gadigal Country. Let’s focus on how loneliness is impacting our lives (hint, it’s a LOT) & how Landcare helps people connect.

The Telstra Talking Loneliness Report 2021 found 44 percent of Australians regularly feel lonely, and 54 percent of Gen Z and 51 percent of Millennials say they feel lonely either often, always or some of the time, which is higher than all other generations.

Forty-eight percent of Australian parents with children at home less than 18 years old say they feel lonely either often, always or some of the time.

The 2020 Ending Loneliness Together in Australia white paper noted single parents, people with a disability, carers, people from low socio-economic backgrounds, people with an immigrant or non-English speaking background, and people living alone are more vulnerable to problematic levels of loneliness.

Even those whom we tend to think of as social butterflies – those aged between 18 and 25 – are actually those who feel loneliest. And in case you’re wondering, we’re lonely in the workplace too: around 37 percent of Australian workers feel lonely among their colleagues.

Read all the reports:

So how does @LandcareAustralia help? Well, this incredible network of 6,000 groups that involve 140,000 volunteers across the country builds relationships & heals our environment heal.

Here’s how: a 2020 study of the Landcare Australia community by KPMG Australia found close to half of the 1,000 people surveyed reported improvements in mental wellbeing, by becoming connected to people, communities and the environment.

Forty-six percent reported an improvement in mental resilience and ability to manage challenges as a result of their involvement.

For folks who reported being involved for as little as four hours or less each month, 43 percent still reported an improvement in their mental wellbeing. Amazing!

One fascinating result of the study was how folks in major cities had higher benefits than those in regional areas: 59 percent in the major metro areas noted an improvement in their mental wellbeing through their involvement in Landcare Australia, compared to 47 percent in the regions. 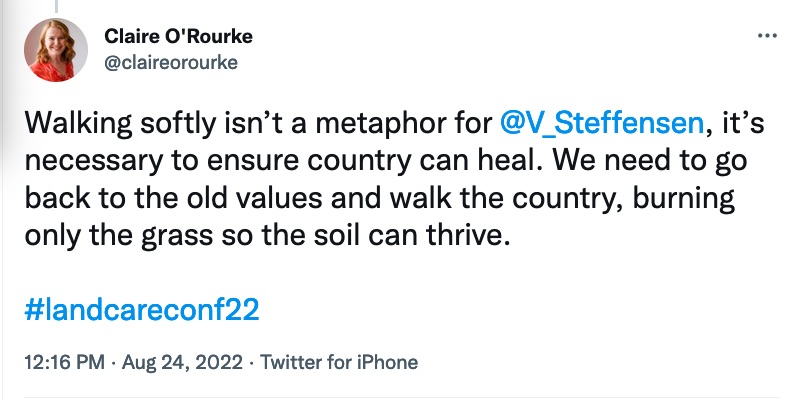 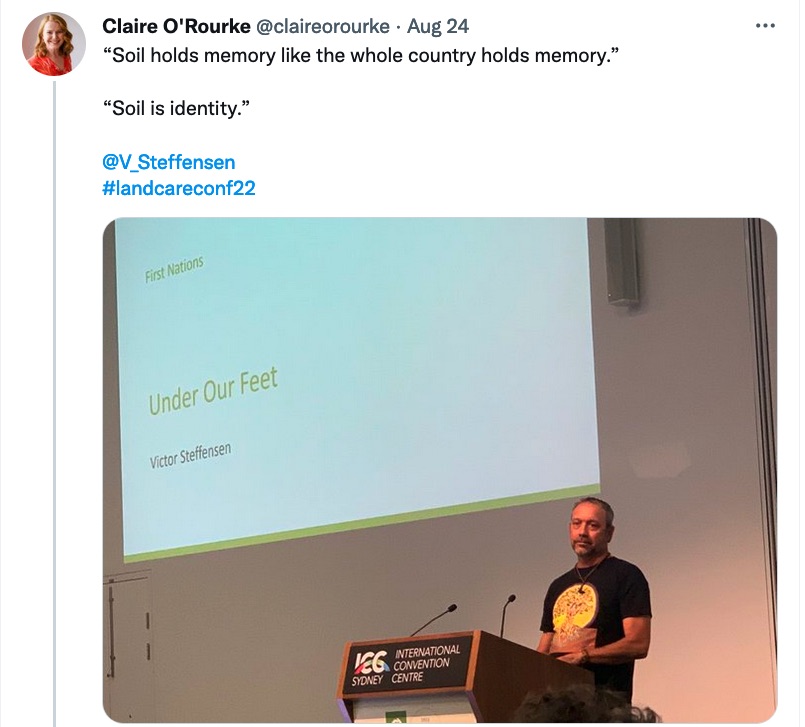 Learn your eco-emotions. We’re going to get into some terminology around the emotional responses to climate change. Any of these resonate?

Ecoanxiety and ecodistress. Defined by the APA in 2017 as ‘the chronic fear of environmental doom’. Includes anxiety, worry, stress, hopelessness, sleep disturbance, irritability, despair and symptoms like upset stomach, awareness of heartbeat, shortness of breath and sweaty palms.

Climate grief/ecological grief/eco-grief. This is grief felt in relation to actual or anticipated experiences including loss of species, ecosystems and meaningful landscapes. Climate grief found to affect those with strong ties to a particular place and people who witness environmental destruction, such as Indigenous and farming communities, and climate scientists.

Solastalgia. Coined by Glenn Albrecht, this is the distress experienced when someone’s home environment changes in negative ways, through climate change or through other causes, that attack someone’s sense of home, creating a deep sense of homesickness. Solastalgia is reported in youth in Indonesia, Inuit communities in Northern Canada, farmers in the Australian wheat belt and in communities around the Great Barrier Reef. Read about it in Albrecht’s book, Earth Emotions.

Carol Ride of Australia’s Psychologists for Safe Climate takes issue with terms like y ecoanxiety because they categorise people as having a pathological emotional state. Difficult climate-related feelings are rational responses, so she prefers the term ‘ climate distress’. 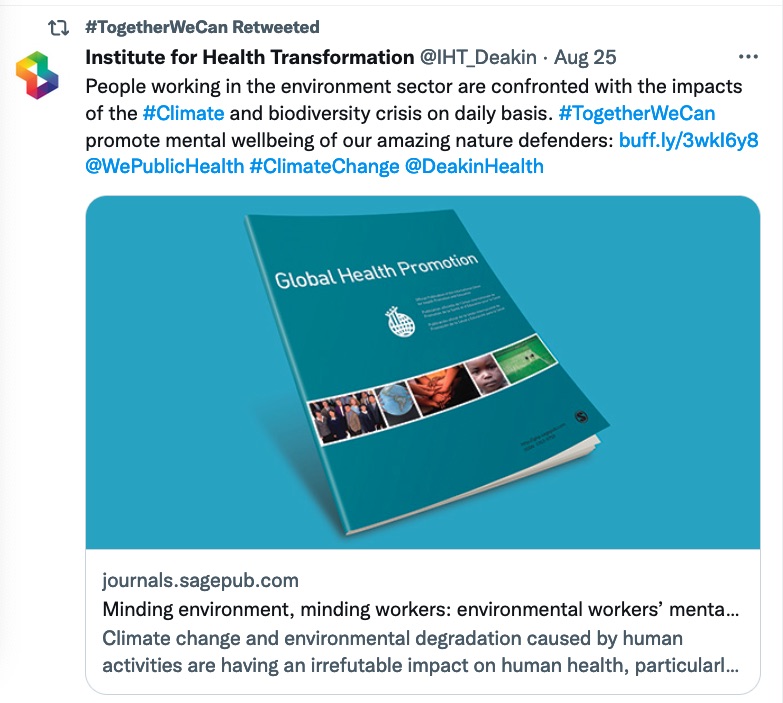 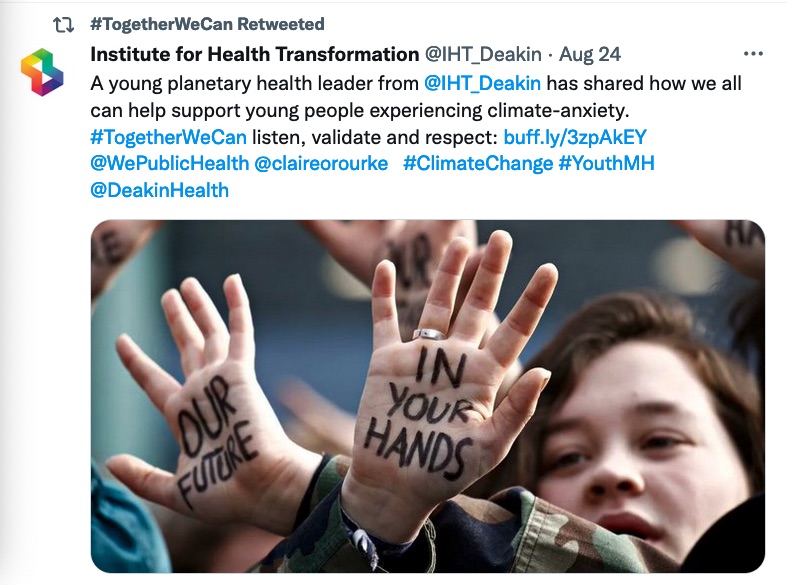 HT to@Emma_L_Lawrance PhD Neuroscience @OxfordWIN and colleagues, whose breakthrough 2021 study provides these definitions and a host of information too. Read it here. 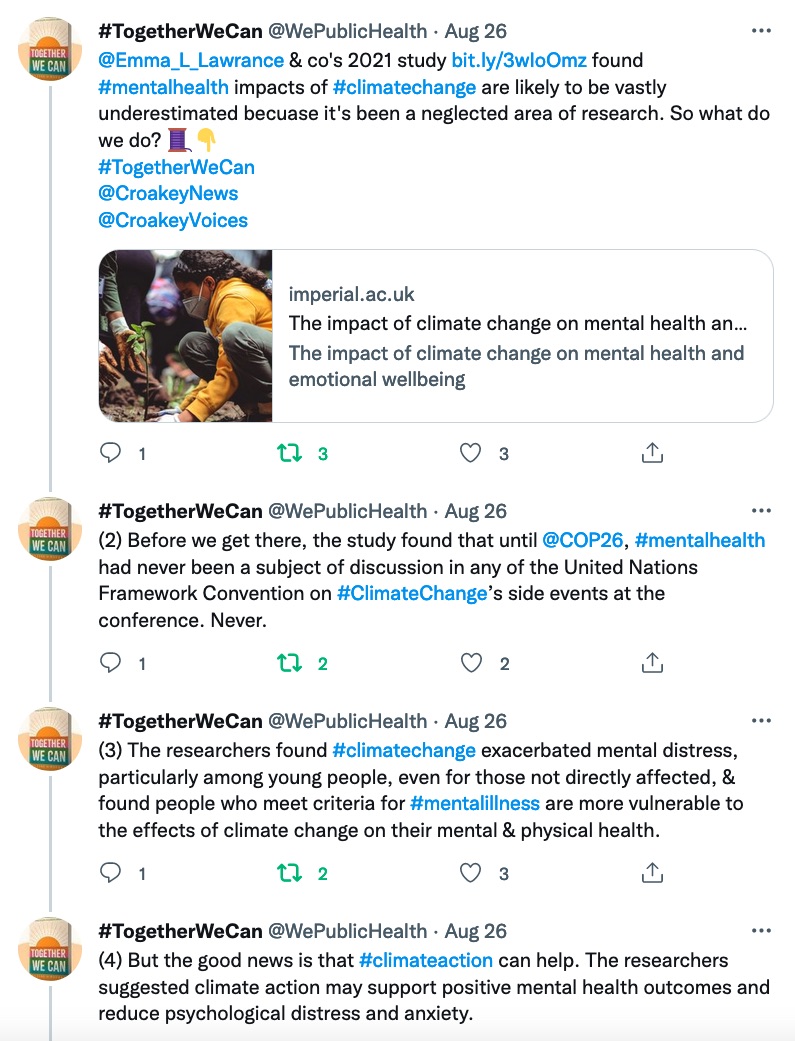 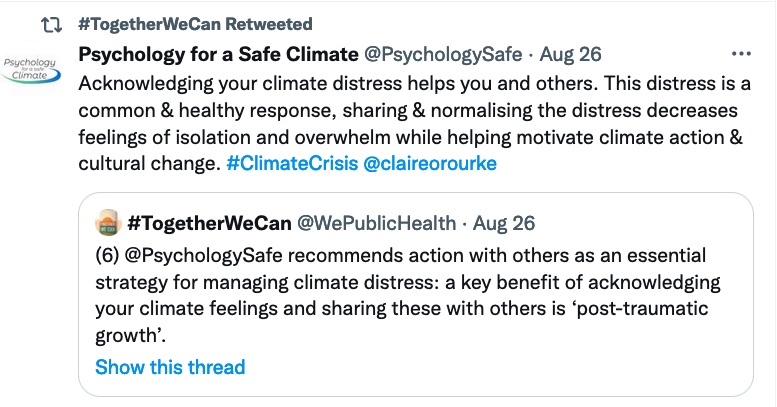 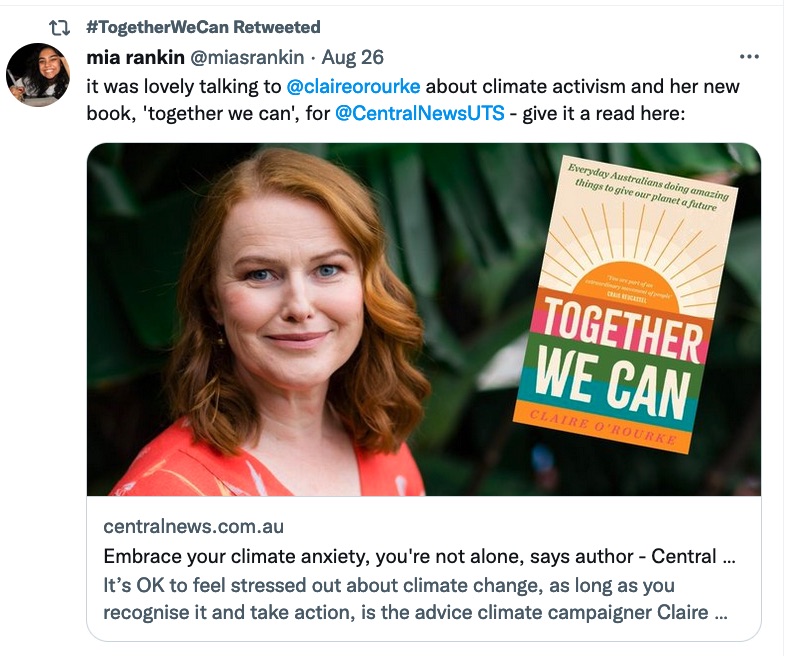 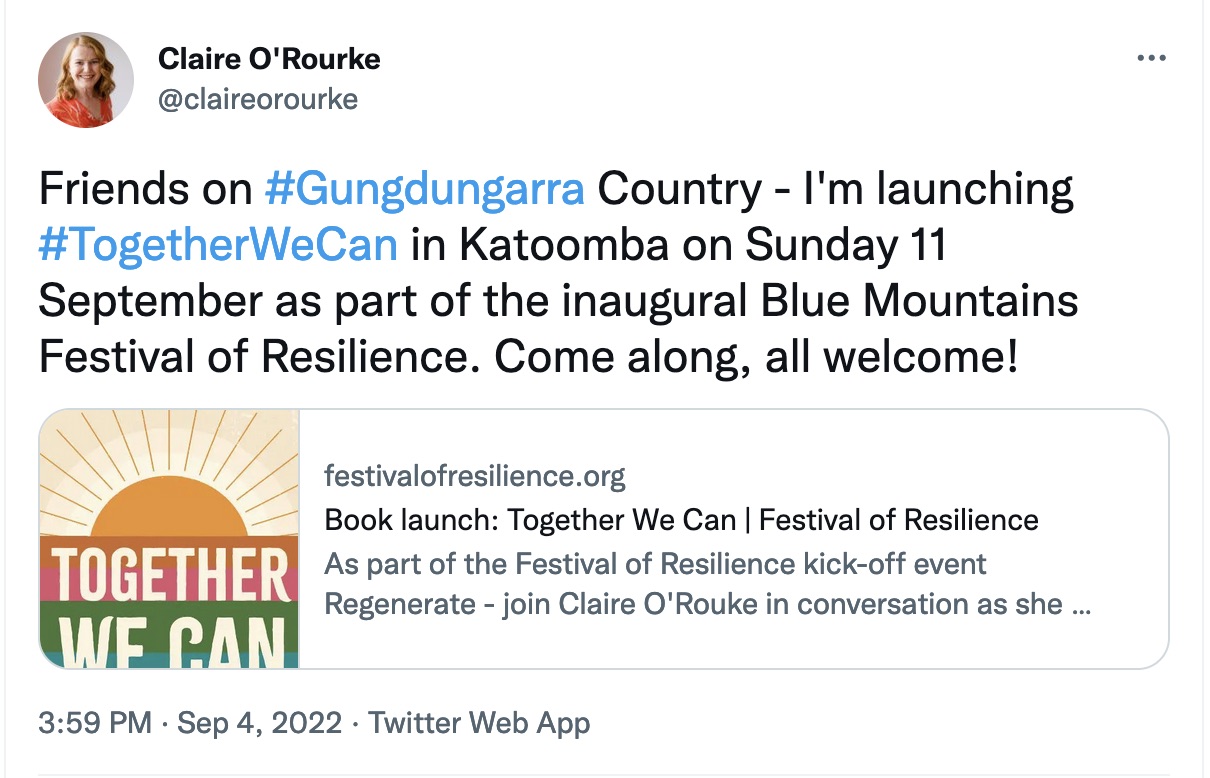 Half of the book’s royalties go to Groundswell Giving.

PrevPreviousStories from the frontlines: why the low JobSeeker rate is a health hazard
NextHearing the white noiseNext