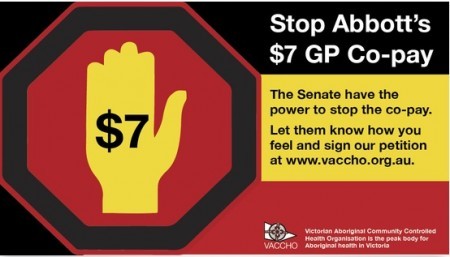 ·  Imposing a $7 Medicare co-payment on Doctor visits and medical tests (e.g. blood tests, ultrasounds, x-rays) will be bad for the health of all Australians but more so for the Aboriginal community.

·  Introducing co-payments will not close the gap in health outcomes; it will widen the gap between Aboriginal people and the rest of the community.

·  A co-payment will increase health care and administration costs for both Government and health care providers.  This will leave less money to provide the community with the care they need because more is spent on administration.

·  This will hurt the sickest and poorest people in our community.  $7 means a lot more to the most disadvantaged among us, especially those in low-income households or with chronic illness.

·  Discouraging people from visiting their GP will interfere with the early detection of illnesses and preventive action such as immunisation.  There will be more illness in our community.

Update: Australian Doctor magazine has launched an online campaign calling an end to “the political madness” and “the slow destruction of general practice”: #stopthecopaycuts.

Meanwhile, in the article below, Adam Stankevicius, Chief Executive Officer of the Consumers Health Forum of Australia, identifies many logical flaws in hitting the poor and sick to fund medical research.

The idea of a $20 billion medical research endowment fund being financed by new imposts on the sick will seem dark farce to the many health consumers already struggling with rising out of pocket health costs.

The Consumers Health Forum strongly supports an expansion of medical R&D in Australia.  There are good grounds to suggest that Australia could develop a much stronger bio-medical industry, but there are more clever ways for it to be funded.

The track record of many existing enterprises, not least CSL, Cochlear and ResMed – all now multi-billion dollar world leaders in their fields – largely as a result of Australian-born and bred ideas, point to the potential.

However, the nature of the latest budget plan fuels the suspicion that this research El Dorado is more wish list than reality and was pulled out of the Prime Minister’s hat to divert attention from the real pain of $8.5 billion in health cuts over the next four years.

If we accept that there will be a significant boost to health research as a result of these co-payments from the ill, let’s hope that one priority will be to deliver real benefits to health consumers now.

Further investment in medical research would likely widen the chasm between medical science and advanced treatments.

Would it save the lives of those who will be investing a minimum of $7 every time they see a GP and $5 more for a prescription?

The previous Government’s wide-ranging McKeon Review into health and medical research, which gets a brief mention in Budget papers, found greater investment is needed for researchers, clinicians and patients/consumers to take the research journey together.

But there is no mention of this critical partnership that has the power to transform lives and more than likely reduce costs to government, insurers and consumers.

The Treasurer said after the budget that the $20 billion research fund would “save lives”. The question is when?  In 10-40 years? Which is how long it takes for research to make a difference to the lives of Australians.

Make better use of the existing research evidence
We actually don’t need fresh research findings to start saving lives straightaway. We have evidence stockpiling in journals that is not seeing the light of day because of the lack of funding and incentives to translate ideas into action.

The evidence is already in showing for instance, that treating people with raised blood pressure could reduce strokes and heart disease but of those who need treatment only 25 per cent of them achieve normal levels.

The potential for significant improvements in hospital outcomes can be as prosaic as washing hands.  A well-resourced drive to improve hospital hand hygiene would save thousands of avoidable and costly infections.  In some hospitals doctors are following hand wash protocols only 30 to 50 per cent of the time.

Patients leaving hospital after a coronary episode can have their mortality halved with the right rehabilitation, medicines and lifestyle changes. But the uptake or availability of such programs is less than 50 per cent.

The effort to maximise the benefits of medical research needs to involve consumers in making decisions about where the money should be invested.

The answers are not black and white, but it is time that consumers, who will be footing the bill for this research, to be included in the debate and development of research investment strategies.

Worryingly, the science behind this health budget leaves the impression that the $20 billion block buster has been rolled out while immediate, do-able challenges are ceased or defunded in the name of budget frugality.

The Medicare supporters rightly see this budget as diluting the principle of universal access.

Failure to address reform priorities
While introducing co-payments that will hit the poor hardest and slashing public hospital funding, the Government has done nothing to roll back the $5 billion a year private health insurance rebate available to those who can afford it.

That is despite the evidence that the growth in health insurance in the past 15 years has failed to ease public hospital strains and in fact may have achieved the opposite.

We know the rise in insurance premiums and out of pocket health costs have persisted. There is little evidence for instance to support the notion that imposing new co-payments for GP and diagnostic services will reduce overall costs, particularly long term.

In fact, the evidence that is available, from such institutions as the highly-conservative RAND Corporation in the United States, suggests the contrary, that there would be little overall saving and that co-payments tend to hit the poor hardest.

The proposal for the “world biggest” medical research endowment may well prove illusory.

Already it looks an unbalanced initiative when we know so many solutions to our health problems are available right now, if only there was the will and the funds to implement them.

• Don’t miss this excellent article in The Guardian by Christopher Mayes and colleagues from the Centre for Values, Ethics and the Law in Medicine  at the University of Sydney. An extract:

“With breathtaking cynicism, the Coalition has also engaged in the oldest strategy in the magicians’ handbook: distraction. The rabbit they have pulled out of their hat is the $20bn medical research future fund, to be financed – they claim – largely through the new taxes and cuts in health services. This is supposed, we can only presume, to buy the quiescence of health and medical academics and researchers, and to distract citizens from the damage being done to our health system. Given that polls consistently show that Australians strongly support Medicare, it’s likely that the government has underestimated our ability to concentrate on what’s important. There are also strong ethical reasons why the Coalition’s proposed changes are unjustifiable.

If health and medical researchers do not stand up now, we will be left not only with a less coherent and less fair health care system, but with the moral blight of having silently colluded in the destruction of universal healthcare. Once destroyed, this will be almost impossible to claw back. We should reject this governments’ urgency rhetoric, lack of compassion for the least well-off, and rejection of solidarity and equity as fundamental Australian values.”

• At Six Minutes, journalist Michael Woodhead lambasts the RACGP for not taking a strong stand against co-payments. He writes:

“Introducing fees to see a  doctor will also undermine the  GP’s role in being at the centre  of preventive care. If there’s a fee  for every vaccination and every  screening test, GPs will lose their  role to pharmacists and nurse practitioner clinics. The College should be telling the world that we need to INCREASE patient visits to GPs, not discourage them with price signals. If GPs want to be at the centre of care, they must fight copayments, on principle.”

PrevPreviousWonky Health – calling for your ideas for engaging, worthwhile investigations
NextThe Budget: Ripping the guts out of fairness and forcing people into povertyNext