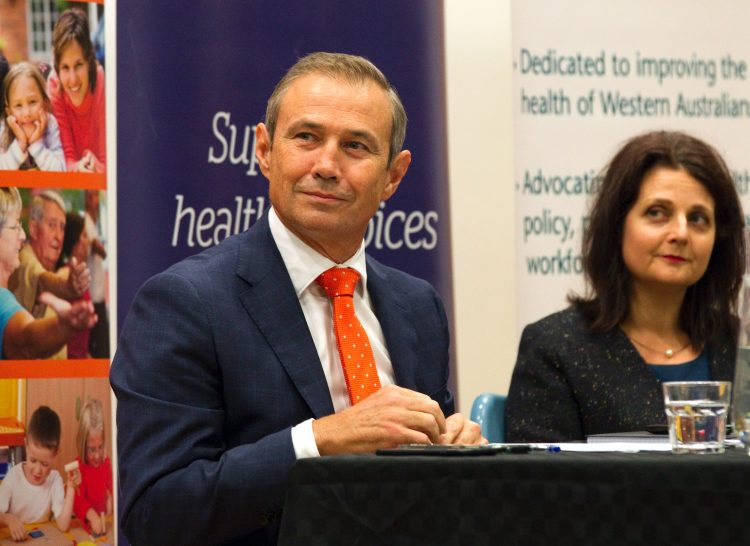 Minister Roger Cook and Alison Xamon, at a public health forum before the election. Photo supplied by PHAIWA

As Western Australians head to the polls, what is on the table for public health?

Introduction by Croakey: Several important commitments for public health have been made ahead of next Saturday’s Western Australian election (13 March), for which almost one-quarter of the votes have already been returned.

The Labor Government, which even the Opposition expects to be re-elected, has promised to convene a taskforce to investigate whether there should be a ban on advertising unhealthy foods and beverages on WA government assets, and to develop a WA Walking Strategy to complement the WA Cycling Strategy.

Labor has also reiterated its previous commitment to appoint WA’s first Chief Sustainability Officer and to increase its investment in prevention to five percent of the health budget by 2029.

The commitments were made at a public health forum hosted by the Public Health Advocacy Institute of WA (PHAIWA) and partners on 4 March, where some robust conversations were facilitated by experienced public health advocate Associate Professor Christina Pollard.

Neither the Liberal Party, which conceded the election last month, nor the National Party attended the forum.

Some of the event’s organisers report below.

Participants heard from the Deputy Premier and the Minister for Health and Mental Health, Hon Roger Cook MLA (WA Labor Party) and the Hon Alison Xamon MLC, Parliamentary leader of the Greens WA.

The Liberal WA and the Nationals WA parties declined the invitation to present their policies at the Forum, citing election commitments as the reason for their absence.

The Forum was initially planned for February but was postponed due to the five-day COVID-19 lockdown at that time.

We believe, however, that the event, held nine days out from the election, could not have come at a better time.

Its focus was on public health – protecting people, preventing disease, and promoting health, and WA political parties were asked to present their priority public health policies and services.

WA Labor and Greens WA used the Forum to their advantage, commenting on the importance of the event, presenting their major public health priorities, and committing to policies that West Australians can expect to benefit from in the near future.

After a warm Welcome to Country from Robyn Collard, Christina Pollard introduced the candidates with Minister Cook taking the floor to competently and effectively sell the WA Labor parties’ public health policies to the audience.

Touching on the coronavirus crisis, the Deputy Premier acknowledged the increase in public appreciation of public health and that it has never been more important.

Minister Cook described how the WA Labor Government had led the ‘no jab no play legislation’ and that they recently became the first State Government to provide free influenza vaccinations to primary school students.

Importantly, Minister Cook outlined the WA Government’s Sustainable Health Review and recommitted to increasing the expenditure on prevention to five percent of the health budget by 2029.  He also reassured the audience that the funding for Healthway, WA’s Health Promotion Foundation, would be maintained.

Explaining that a review of the Tobacco Products Control Act was underway, Minister Cook assured West Australians that he would action it with pace. On the topic of healthy weight, the Deputy Premier reminded the audience of the State’s first WA Healthy Weight Action Plan and the renewed funding for the LiveLighter® campaign.

Speaking to the importance of policy to eliminate alcohol advertising on Government assets Minister Cook announced that Labor WA would “immediately convene a Task force to consider the issue of advertising unhealthy foods and beverages on WA government assets”.

He also announced the McGowan Government promise of a WA Walking Strategy to complement the WA Cycling Strategy, ongoing funding for the Alcohol. Think Again campaign, and an ongoing focus on the prevention of Fetal Alcohol Spectrum Disorder (FASD). The audience was reminded of the McGowan Government’s role in advocating for mandatory pregnancy warnings that will appear on all alcoholic beverages by 31 July 2023.

Mental health promotion and illness prevention was a key public health priority presented at the Forum.

In line with key advocacy asks by the public health community, Labor WA reminded the Forum, that the WA Mental Health, Alcohol and Other Drug Services Plan 2015-2025 recommends increasing the funding for prevention activity in the Mental Health Commission budget be increased to at least five percent by the end of 2025.

In response to the Climate Health WA Inquiry Report, Labor will appoint WA’s first Chief Sustainability Officer to lead the implementation of the recommendations.

Recognising the pressure that Emergency Departments are under, largely driven by mental health admissions, Minister Cook announced that over 300 hospital beds will be added, with 100 for mental health.

Minister Cook left the floor commenting how “humbled” he was to have had the opportunity to have served alongside some of the most dedicated public health officials through the COVID-19 pandemic and hoped for a stronger and safer, future Western Australia.

The Hon Alison Xamon then took to the stage and announced that “Labor are likely to win this year’s election” and positioned her priorities with an overview of the importance of the Greens WA having seats in Parliament in order to “keep Labor in line”, should they win.

Xamon expressed the deep commitment the Greens WA party has to public health, and its demonstrated history of advocacy in this area. She candidly reassured the audience that if Labor WA dropped the ball on any election promises, the Greens would be there to let them know.

Relating directly to public health, she noted that WA did so well during the coronavirus pandemic simply because authorities followed evidence-based public health advice. Xamon expressed her dismay at the lack of commitment to the current Mental Health Plan advising that “as long as we fail to invest in the plan, people will lose their lives”.

Replying to the WA Labor Government’s Sustainable Health Review promise, Xamon challenged that this needs to be “translated into dollars” to be believed.

Xamon backed the ‘junk food advertising inquiry’ and the Minimum Alcohol Unit Pricing, stating that alcohol is “the most harmful drug in our community”.

The Greens WA party leader voiced her disappointment that electronic gaming has not yet been removed from TABs and said that it’s time to recognise the damaging effects of gambling. [Since the forum, Xamon has backed the Government’s plans to hold a Royal Commission into Crown’s suitability to hold a casino licence, and called for a ban on the gambling industry donating to political parties].

Not fully convinced by the WA Labor party’s climate change plan, Alison Xamon was not reassured that it would stand up beyond the election.

The Greens WA leader pleaded with Deputy Premier Cook to “please follow public health advice on addressing illicit drug use in the state”.

She finished with a statement noting how WA Labor have “all the political capital in the world” and should follow public health advice as it is presented.

Following both presentations, a Q&A session was held with the audience in the room and online, largely representative of public health advocacy groups or individuals with specific interests.

The audience grilled party leaders on topics including the need for a plan of action to implement all recommendations of the Sustainable Health Review and funding for a SunSmart skin cancer campaign, the detrimental impact of the casualisation of the public health workforce, WA’s stance on firearms, and support for stroke victims.

Concerns were also raised regarding the urgent need for a WA response to food insecurity and support for social policies to prevent detrimental health impacts related to financial hardship. In response, there was a strong recommendation by Hon Alison Xamon supporting the need to Raise the Rate for good.

The Forum was relaxed yet firm, with Hon Roger Cook and Alison Xamon ‘toing and froing’ between answers, ensuring party public health priorities were clear, and that the road map to a safe and strong Western Australia was the priority.

Bringing political party representatives and public health advocates together for this pre-election Forum led to important and robust discussions on immediate public health priorities across the diverse and complex range of public health issues.

Yet, the policies and actions needed to protect and promote public health discussed were embraced with optimism.

Along with all our partners we will continue to advocate for all political parties to express their public health priorities to promote health for all.

We would like to thank our partners, listed below.

PrevPreviousWorld Obesity Day: time to take action on junk food advertising to children
NextListen to people with hearing loss about what needs to change: new reportNext