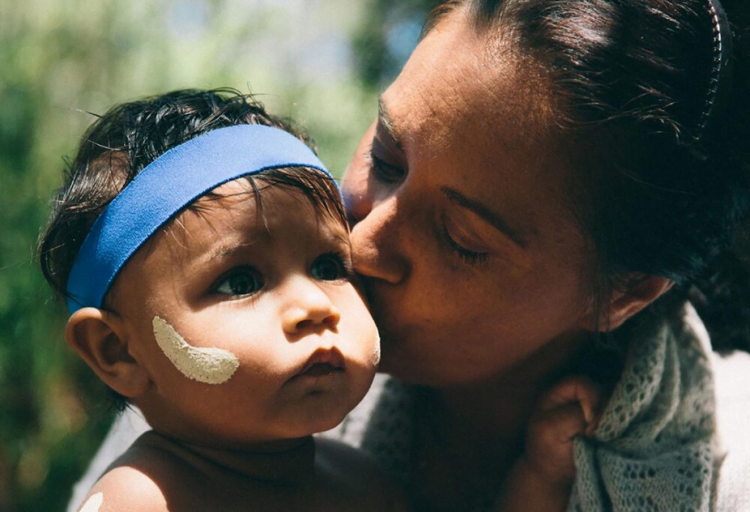 Birthing on Country for the best start in life: Photo supplied by Waminda

Introduction by Croakey: The Congress of Aboriginal and Torres Strait Islander Nurses and Midwives (CATSINaM) #BackToTheFire national conference series went “back to where it all began” recently, with its New South Wales event marking CATSINaM’s origins in Sydney nearly 25 years ago.

The online event heard calls for the decolonisation of research and about the power of Birthing on Country to give children the best start in life, with a big focus on addressing ongoing harms from the prison and health systems for women and their families.

Once a fortnight the Minga Gudjaga (Mother and Baby) team at the Waminda South Coast Women’s Health and Welfare Aboriginal Corporation come together in Nowra, on the south coast of New South Wales, on the lands of the Yuin Nation and its peoples.

The multidisciplinary team that includes midwives, GPs, social workers, drug and alcohol counsellors and mental health workers focus on each of the women they are supporting through pregnancy at Waminda.

But unlike mainstream health service approaches that focus on risks and deficits ahead of a birth, they look at the strengths that each woman brings to a range of issues that might be affecting them, from drug and alcohol use to family violence and past involvement with child protection.

“We ask: ‘What is she good at? What is she strong at? What is she deadly at?’,” says Melanie Briggs, a Dharawal and Gumbaynggirr woman, midwife and director at Waminda, who is leading the service’s Birthing on Country program.

The fortnightly group known as EMBA (Empowering Mothers and Babies Autonomy) not only seeks to “identify the woman’s strengths straight up” but sees the issues through the lens of colonisation, to see how structural and systemic racism have come into play for women and families and where the system’s often automatic response is to remove babies from their families.

It’s among a range of wrap-around-supports and protective interventions offered at Waminda, which is home to one of three major Birthing on Country initiatives in Australia that are seeing better clinical and cultural outcomes for Aboriginal and Torres Strait Islander mothers and babies.

As well as privileging Aboriginal and Torres Strait Islander people’s knowledges of pregnancy, childbirth and early parenting, Birthing on Country understands that care is much broader than just labour and delivery, that it deals also with “socio-cultural and spiritual risk”, often caused by racism or failures to respect cultural needs within the health system.

“The system blames the woman, and we’re trying to reverse that,” says Briggs, who describes Waminda’s work as engaging in “purposeful acts of resistance” to raise the health and wellbeing – physical, mental and spiritual – of the women and families in its care. Briggs was a keynote speaker at this month’s Congress of Aboriginal and Torres Strait Islander Nurses and Midwives (CATSINaM) #BackToTheFire conference in New South Wales – an event which itself showcased ongoing acts of resistance and activism.

That included a powerful Welcome to Country from Dharawal and Gumbaynggirr woman Rowena Welsh, who traces back through her maternal grandmother to the Timbrey family of La Perouse, who were present when Captain Cook and later Captain Arthur Phillip dropped anchor.

“I’m very proud that I come from an unbroken line of Aboriginal people, born here in Sydney, despite being one of the first places impacted by colonisation and invasion,” Welsh told delegates.

Her family were fishermen and shell workers, who continue to live on Country, practise culture, fish in traditional waters “and pass on our cultural knowledge”, she said.

Welsh talked about the protocol of the Welcome to Country, traditionally done to “welcome and acknowledge other mobs travelling through Country for marriage ceremonies or other purposes”.

It was to ensure that “whilst you were on Country, you had a safe passage, and you were able to utilise the abundance of waters, medicines and foods that were on that Country,” she said, honouring the strength and resilience of those attending #BackToTheFire. 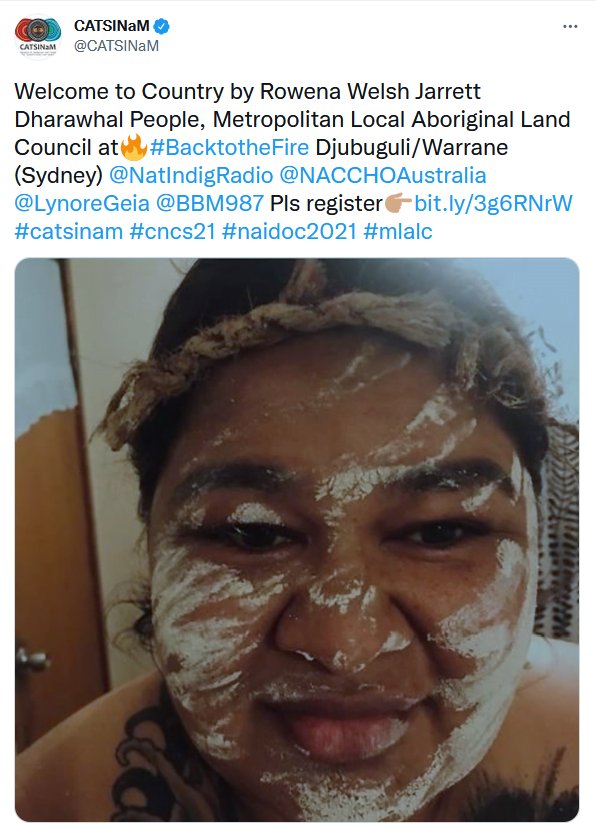 The NSW event was originally planned to be staged face-to-face in Sydney on Gadigal land and to be particularly special for the #BackToTheFire national conference series.

“We were going back to where it all began,” said CEO Dr Roianne West, recalling when 42 Aboriginal and Torres Strait Islander nurses came together in Sydney in 1997 to form CATSINaM.

That celebration will now happen next year with a national conference planned to mark the 25th anniversary of CATSINaM’s founding, but the online NSW event was still able to honour its origins, welcoming four founding members for the day’s discussions.

“The few of us (that there were then) struggled, we had no support, sometimes it was thought that we were ‘reaching above our station in life’,” she said of those days when Aboriginal and Torres Strait Islander women were finally permitted to enter mainstream nursing.

“We had to convince patients, administration, fellow nurses that we were just as capable and were oh so keen to succeed,” she said, admitting that was made even more difficult given they were mostly given “the back end of jobs”.

Since then, she said, Aboriginal and Torres Strait Islander nurses and midwives have made such gains”, adding that she was “blown away” attending the conference to be able to see the numbers now working in nursing and midwifery, and also in leadership roles in research and universities.

Among them is fellow founding CATSINaM member Professor Juanita Sherwood, who has Wiradjuri, Murri, Maori and Anglo-Celtic lineages, and is Pro Vice-Chancellor of Indigenous Engagement at Charles Sturt University in NSW, based in Wagga Wagga.

Inspired by Maori nurse and scholar Dr Irihapeti Ramsden, Sherwood is widely credited with the uptake of Indigenous-centred research and decolonising methods in Australia and recognition of colonisation as a primary determinant of Indigenous health, West said. 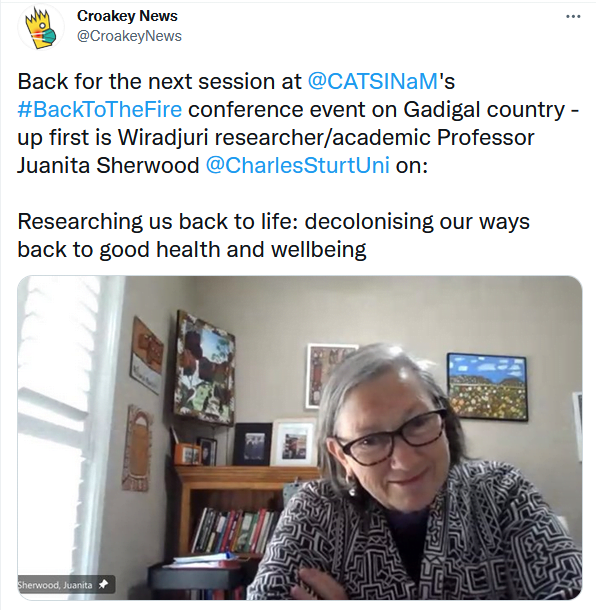 In her keynote address, Sherwood said the subjugation of Western research – “on us, about us, without us” – meant that research had become “one of the dirtiest words” in First Nations’ vocabularies.

Only in the past 10-15 years has that power begun to shift, leading to monumental changes, she said – “we’re influencing health systems” and reminding people that “we do hold power here”.

What makes research led by First Nations important is that “we do it in ways that work for our community”, she said. It takes longer than Western models of research, but “our methods are safer, (and) our focus is about relationships and being accountable to community”.

Sherwood said she had witnessed many Aboriginal and Torres Strait Islander people trying to tell their stories but not being heard by non-Indigenous researchers who were too busy “trying to think of the next question”.

“We’ve been taught to listen, we’ve always been sharing through story so listening and being respectful in that space is a critical part of our methodology,” she said. 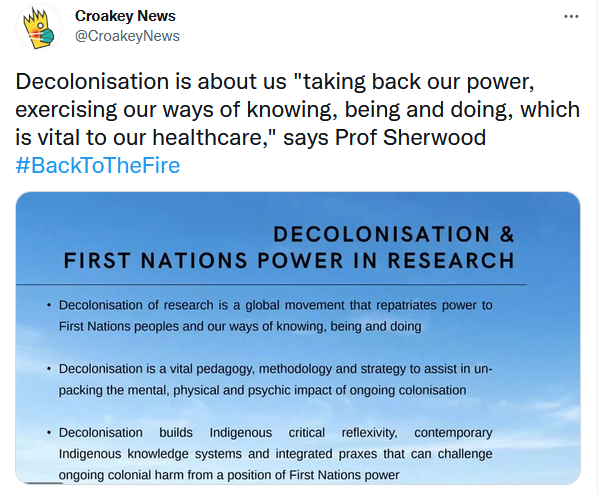 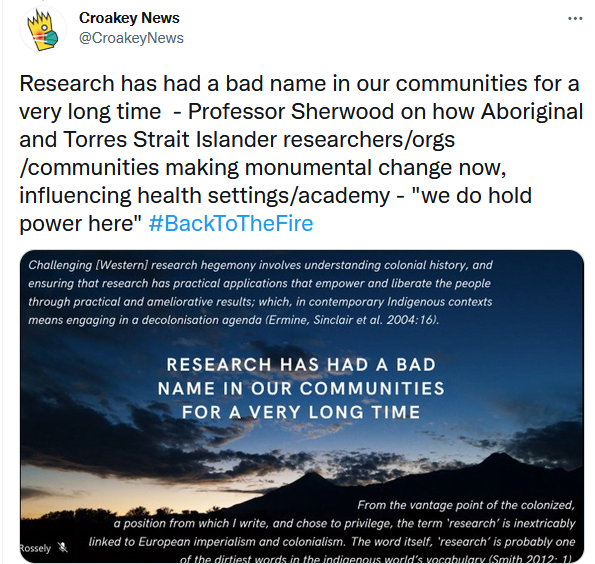 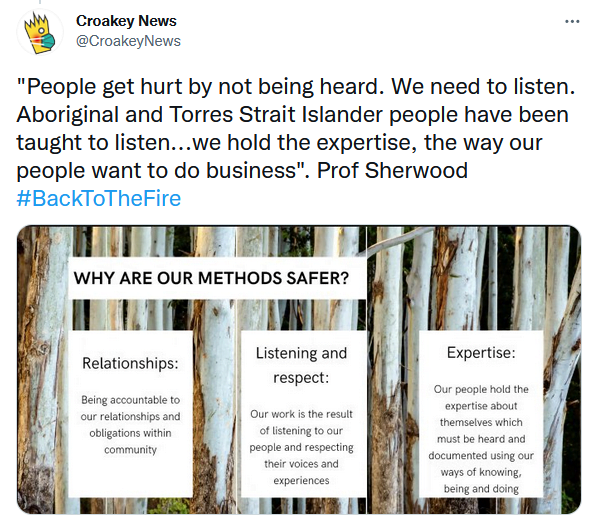 Sherwood talked about the importance of the researcher not assuming they know everything, to be humble, to recognise that “you’re being gifted knowledge”, that it takes time to reflect on knowledge, and to understand that research is not a one-off transaction but part of building a relationship.

And she warned that research that seeks objectivity by maintaining distance “violates Aboriginal ethics of reciprocal relationship”.

“Don’t say ‘I’m being objective’ because that’s not the way we do business,” she said, urging researchers to shift their approach from ‘the coloniser and the colonised’ – “to a more balanced relationship between the knowledge seeker and the knowledge holder expert”.

Sherwood told the conference about a research project she was part of some years ago called SCREAM – Social and cultural resilience and emotional wellbeing of mothers in prison.

Its findings are critical with Aboriginal and Torres Strait Islander people continuing “to be colonised in the justice system” with Indigenous women the fastest growing prison population, incarcerated at rates 20 times that of non-Indigenous women. Most play important roles for their extended families, with 80 percent of women in prison having children aged under 18, she said.

“When you put a mother in prison, you disadvantage a whole extended family,” Sherwood told the conference, recalling visits to prison for the project when she had seen women crying on phones, trying to find out where their children had been taken.

“Days and days and days of women, devastated, trying to find out what the system had done with their children, the most devastating impact of being inside,” she said. 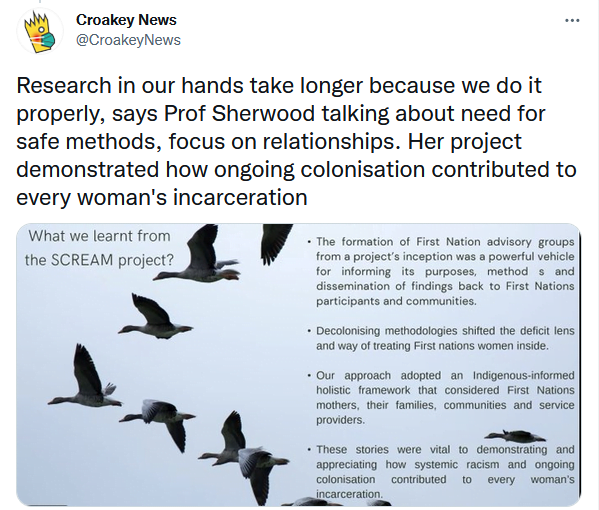 Sherwood’s message on the research process for that project was the importance of establishing a First Nations advisory group “right from the beginning” and for Indigenous-centred methodologies that could produce work that “prioritises, rather than pathologises, Indigenous standpoints”.

It was also critical for researchers to build relationships with Aboriginal community controlled organisations like Waminda, which had played such an important role in the lives of many of the prisoners involved in the SCREAM project, she said.

Birthing on Country as healing

Sherwood has also worked with Waminda and other services across Australia on Birthing on Country principles and initiatives that are seen as critical to Close the Gap priorities for children and families.

​With other leading researchers, Sherwood and Melanie Briggs last year reported on yarning workshops conducted with women in Waminda’s region.

Briggs told Croakey that mainstream health services and agencies “always talk about clinical risks” for Aboriginal and Torres Strait Islander women and babies, but what they miss is the “risk to our culture” and the importance of community led and cultural programs that “circle around the woman”, providing holistic spiritual, cultural and physical support.

When the research team went to women in the community and asked “what risk does the system pose for us?”, they heard terrible stories of fear, trauma and being judged, she said.

“Racism, first and foremost. Women scared to go to the hospital because they’ll be reported to (child protection). The lack of ability to have family on site, while we’re giving birth to our next generation, not being able to have our Elders there to witness it.”

Their stories and concerns were echoed at the conference by CATSINaM founding member Aunty Lynda Holden, who revealed she was taken from her own family because they lived on a riverbank.

“We were healthy, we went to school….but they took us”, she said, highlighting the direct role of nursing and midwifery at the time and in ongoing unjust removals of children from their families.

“The nurses, as soon as mothers come in with a problem, get in touch with child protection authorities…it’s the nurses who are doing it,” she said.

Waminda’s work has led to the establishment of a cultural and clinical governance committee and a proposal now for a $24 million Gudjaga Gunyahlamai Birth Centre and Community Hub, which its business case says would be a “landmark innovation of national and international significance”. 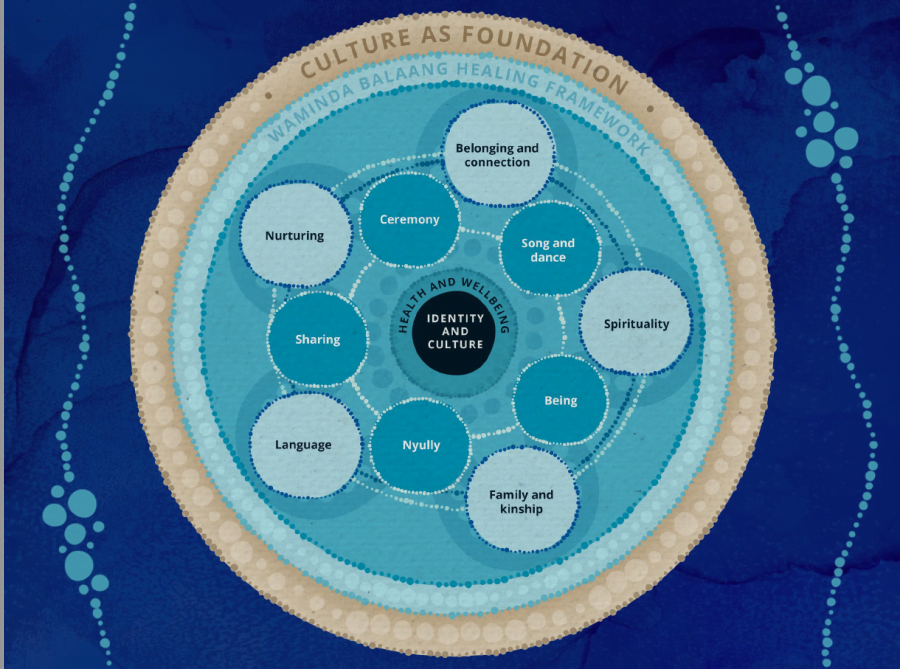 In December, a special celebration will take place. Waminda’s team will take 51 new bubs who were born in the region through the lockdown months out on Country, together with their families and communities.

“It’s a big day,” Briggs says of the regular event. “We all come together, we yarn and we sing and do ceremony, do beautiful photos of the babies and the mums, it’s a lovely grounding day.”

“Being able to practise culture is a big strength for us.”

You can read a Twitter thread on the presentations at #BackToTheFire by Professor Sherwood and Melanie Briggs.