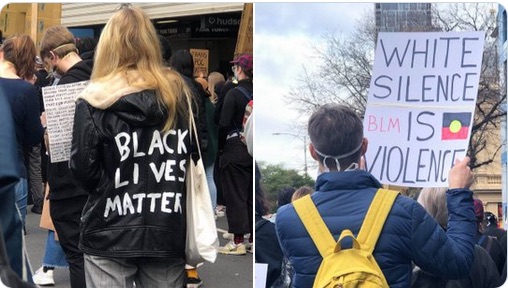 Thursday, 25 June, marks one month since George Floyd died as a result of police brutality in Minneapolis, triggering a global outpouring of support for #BlackLivesMatter and calls to address all forms of systemic racism, including in the health and justice systems.

Dr Tedros Adhanom Ghebreyesus, head of the World Health Organization (WHO), Winnie Byanyima, Executive-Director of UNAIDS, and Natalia Kanem, head of the UN sexual and reproductive health agency (UNFPA), were among more than 20 United Nations leaders who are African or of African descent to sign a joint personal letter urging the UN to act against systemic racism.

We owe it to George Floyd and to all victims of racial discrimination and police brutality to dismantle racist institutions. As leaders in the multilateral system, we believe it is incumbent upon us to speak for those whose voices have been silenced, and advocate for effective responses that would contribute to fight systemic racism, a global scourge that has been perpetuated over centuries.

The shocking killing of George Floyd is rooted in a wider and intractable set of issues that will not disappear if we ignore them. It is time for the United Nations to step up and act decisively to help end systemic racism against people of African descent and other minority groups “in  promoting and encouraging respect for human rights and for fundamental freedoms for all, without distinction as to race, sex, language, or religion” as stipulated in Article 1 of the UN Charter.”

The UN leaders said their “expression of solidarity is well in keeping with our responsibilities and obligations as international civil servants to stand up and speak out against oppression” and that they shared “the core beliefs and the values and principles enshrined in the Charter of the United Nations that do not leave us the option to keep silent”.

In the United States, the United Kingdom and other countries, many health leaders joined their voices to the calls of #BlackLivesMatter. Rather than seeing concerns about infection as a reason to stay silent or criticise mass protests, some drew the connections with the inequalities exposed and exacerbated by the pandemic.

An editorial in The Lancet (13 June) described racism “as a public health emergency of global concern” and urged everybody to engage with the work of anti-racism.

Dr Africa Stewart, President of the Board of Directors for MSF-USA, cited reports that the COVID-19 mortality rate for Black people in the US is more than twice as high as the rate for white people, with estimates that if the mortality rates were equal, some 13,000 Black people would still be alive today. “Silence is violence,” she said.

The American Public Health Association issued a statement urging Americans not to be silent about the public health crisis of racism, saying that as Martin Luther King, Jr. observed, “The ultimate tragedy is not the oppression and cruelty by the bad people but the silence over that by the good people.”

Writing in The Atlantic, Professor Julia Marcus and Professor Gregg Gonsalves said that in the US many protesters and public health experts had weighed the interrelated risks of the coronavirus pandemic, police violence, and centuries of systemic racism – and came “to the conclusion that the health implications of maintaining the status quo of white supremacy are too great to ignore, even with the potential for an increase in coronavirus transmission from the protests”.

“In the midst of both a pandemic and a civil-rights uprising, ordinary Americans are trying to take care of one another in extraordinary ways—by socially distancing to prevent coronavirus transmission and by protesting the deadly legacy of white supremacy.

No one who is truly concerned about the public’s health has the luxury of sitting on the sidelines of either of these fights.”

Assistant Professor Brooke Cunningham, a general internist and a sociologist from the Department of Family Medicine and Community Health at University of Minnesota, wrote in Time that the struggle for racial justice has always required people to put their bodies on the line, and that “protesters are essential workers in a pandemic of police brutality and global racism”.

We would never blame any other type of essential worker for contracting COVID-19. Let’s not start blaming protesters.”

In Australia, many tens of thousands of people have marched, supported and called for action to stop Black deaths in custody and the over-incarceration of Aboriginal and Torres Strait Islander people.

This Friday, UTS’s Jumbunna Institute for Indigenous Education and Research and Centre for Social Justice and Inclusion will host a webinar discussion asking why it’s taken an international uprising to pay attention to the voices of First Nations Australians campaigning for justice for generations?

The webinar will also ask the question: are we seeing the catalyst for real recognition and reform, or will the moment pass?

How those questions are answered will depend, at least in part, upon the actions of those in positions of power to effect change.

To date, there is very little sign that senior health policy makers, from the Chief Medical Officer to Health Minister Greg Hunt, will use their authority to name and address the systemic racism that contributes to poorer healthcare, as it does to overincarceration.

Rather than seizing an opportunity to advocate for meaningful reform, their statements have problematised the protests and the protesters, lending weight to mainstream media narratives that so often have concentrated on critiquing Black Lives Matter protesters, rather than the reasons for protest. 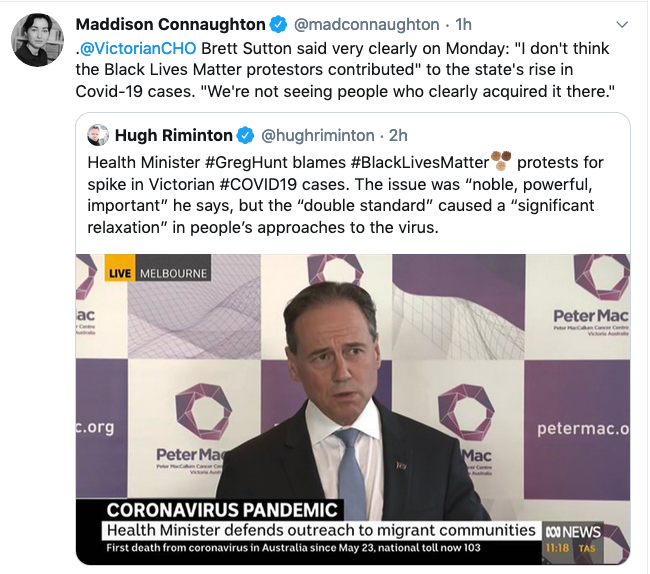 With some exceptions (see below), the mainstream health sector has not been loud in expressing support and solidarity for #BlackLivesMatter.

By contrast, many Aboriginal and Torres Strait Islander health organisations and leaders have urged support for anti-racism, and have supported or joined the marches (as Dr Janine Mohamed described previously at Croakey), with the Victorian Aboriginal Community Controlled Health Organisation (VACCHO) and others urging a harm minimisation approach.

The Australian Indigenous Psychologists Association issued a statement of support for the Black Lives Matter demonstrations across Australia and their “call for reform to our lawmakers and to those who administer the law”. 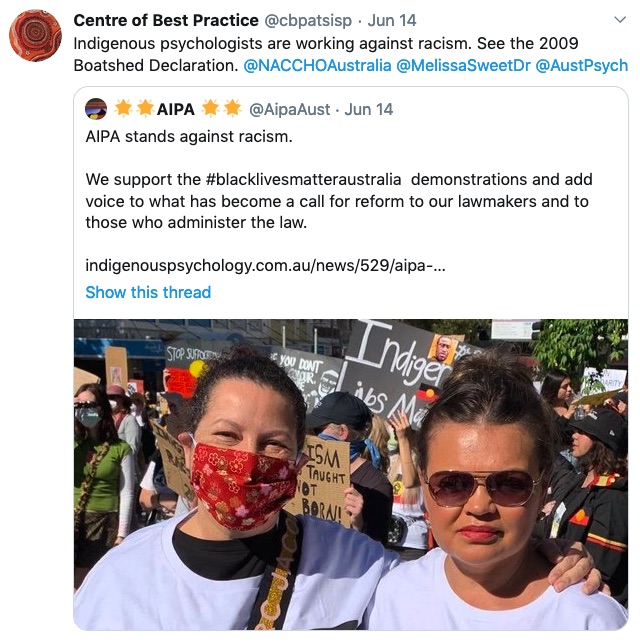 The Centre of Best Practice in Aboriginal and Torres Strait Islander Suicide Prevention (CBPATSISP) at the University of Western Australia said it “stands with those protesting for justice worldwide and are committed to challenging all forms of racism and State violence”.

Pat Anderson, Chair of the Lowitja Institute, released a statement titled, Racism is killing us.

Yet instead of taking urgent action, our government criticises us for our protests. Instead of working to address historic injustice, our Prime Minister diminished it, declaring we should not be “importing the things that are happening overseas to Australia” and that “there was no slavery in Australia”. How can the leader of our country not know our history?

So, as the cries of #BlackLivesMatter continue to ring out across the globe, where do we go from here in Australia?

We need to acknowledge that racism is deeply entrenched in Australia and is a public health emergency for Aboriginal and Torres Strait Islander people.

That terrible reality is there to be read clearly in the current National Aboriginal and Torres Strait Islander Health Plan, which identifies racism as a key driver of ill-health.

It is there to be read in the Uluru Statement to the Heart. In the critiques of the Closing the Gap strategy.

It is in the recommendations of the Royal Commission into Aboriginal Deaths in Custody which has at their heart, as Professor Megan Davis said last week, the need to address “the structural powerlessness that renders Indigenous voices silent” in our nation.

It is time to end that silence. And it is time for governments to hear us.”

Meanwhile, several legal and human rights groups condemned the approach of many Australian governments to the Black Lives Matter and refugee rights protests, stating it is inconsistent with democratic rights and freedoms. A joint statement said:

Right now, the right to protest is vital for minority groups and supporters who continue to rally against state violence and injustice. Historically, overturning injustice of this kind requires incredible public momentum and visibility, which can only be sustained through protest.

Since colonisation, Aboriginal and Torres Strait Islander Peoples have fearlessly fought for an end to police violence, discriminatory laws and the structural racism that locks them out of justice. The pressure is building on governments here in Australia to finally act on what First Nations people have been calling on for decades: an end to Black deaths in custody and an end to police violence.

The statement noted that instead of committing to systemic change to keep Aboriginal and Torres Strait Islander people out of prisons and end Black deaths in custody, the Prime Minister called for Black Lives Matter protesters to be arrested and charged – juxtaposed against an announcement that football stadiums with crowds of 10,000 would be reopening.

Croakey has attempted to document examples of mainstream health and medical organisations issuing public statements on Black Lives Matter. If there are any omissions, please contact us.

Royal Australian and New Zealand College of Obstetricians and Gynaecologists: Racism diminishes all of us 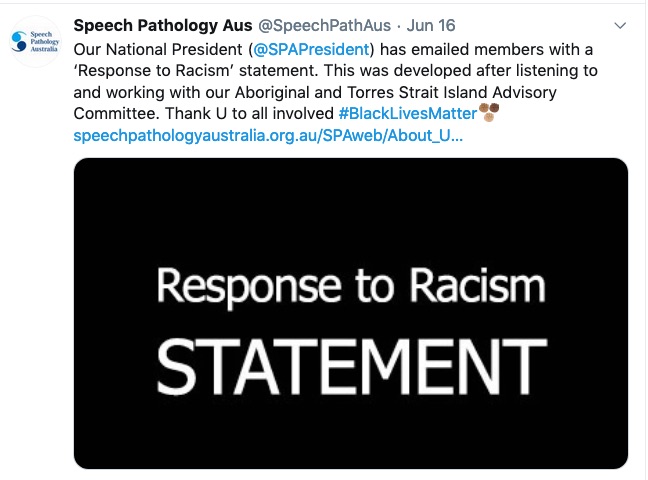 Occupational Therapy Australia: A Message to the Aboriginal and Torres Strait Islander Community

I’ve been working on campaigning for people in prisons (calling for release) in the midst of COVID because of the health risk to people in prison (generally but including now).

Yet so many in the health sector ignored the plight of people in prison. Prisons are a much greater health threat than protests. BLM, including in custody, needs to be on the agenda all the time.”

All Australians have a role to play in fighting injustice.

White peoples, who benefit from a system that privileges them must work alongside Indigenous peoples to make governments accountable for their actions and force the government to properly implement The Royal Commission’s recommendations.

Our education system must teach children about our history of racism, the social and historical determinants that underlie it, how this historical oppression continues, and what each of us can to do stand against racism.”

To learn more about whiteness and anti-racism, the Centre recommended ten actions:

2. Read about the families who have not seen justice for their loved ones killed in custody:

3. Go to other Aboriginal and Torres Strait Islander events throughout the year:

4. Educate yourself about systemic racism, Aboriginal disadvantage and white privilege:

5. Learn about your Country and the First peoples of your local area, Australia’s Indigenous history, culture, and pride:

6. Encourage your workplace, university or school to do Indigenous-led cultural competency or Indigenous cultural awareness training, and support their reconciliation journey:

9. Buy from Indigenous suppliers and businesses. Supply Nation is a large database of Aboriginal and Torres Strait Islander businesses.

10. Teach people around you as you learn – remember silence implies consent.

Dr Megan Williams, a Wiradjuri scholar of health and justice and contributing editor at Croakey Health Media, also recommends this MOOC from The National Centre for Cultural Competence,

While some universities have sought to engage with the Black Lives Matter discussions, Williams says that tertiary institutions have generally been very quiet in response to #BLM, as students who would usually have mobilised and campaigned very visibly and persistently on campuses have been unable to because of studying from home during COVID-19.

Meanwhile, she says: “The work continues, as has occurred for decades, that Black Lives Matter and it’s time to end over-incarceration of Aboriginal and Torres Strait Islander people and put in place solutions that have been identified, such as through #JustJustice.” 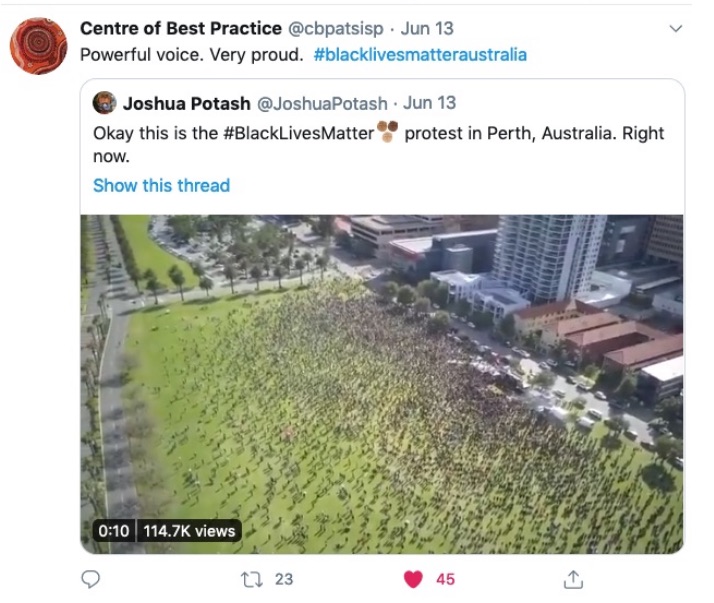 PrevPreviousCOVID-19 wrap: “a new and dangerous phase”, interventions that work, and lessons from Vietnam and Japan
NextHealth and medical experts sound the alarm on university funding changesNext