Australians spend more per person on gambling than any other country in the world. Source: Alliance for Gambling Reform

Introduction by Croakey: A Victorian politician has urged the Royal Commission into Victoria’s Mental Health System to address the harms caused by gambling as a public health issue.

Citing her former husband’s gambling addiction, Michaela Settle, the Member for Buninyong, has reportedly called in a submission to the Commission for an increased focus on early intervention and support services, and better training for health professionals.

Settle’s call comes as new figures show Victorians lost $2.698 billion on poker machines in the state in the 2018-19 financial year, the second highest amount of losses since pokies were introduced to Victoria, and the equivalent to Victorian adults losing $530 each on average.

Meanwhile, Rev Tim Costello AO, spokesman for the Alliance for Gambling Reform, makes several suggestions in the article below for how governments could reduce gambling-related harm – including banning political donations from the gambling industry.

Costello is not able to join the #NavigatingHealth #CroakeyGO in Melbourne this week (1 August), but asks that participants consider engaging in advocacy around gambling-related harm.

Gambling is a scourge in Australia. It not only leads to mental health problems, it also is a symptom of them.

Australia has 0.3 percent of the world’s population and 18 percent of its poker machines. We collectively lost $24 billion last year feeding money into those pokies, and gambling on sports.

When you appreciate there is significant psychological research applied in the design of poker machines, it is easy to understand why such huge sums of money are wasted every year gambling.

Put simply, poker machines are designed to addict people. The machines are programmed by the industry to be riddled with near misses and losses disguised as wins. That means a machine will play happy music and light up about a 20 cent “win” from a $1 bet, when in fact the person has lost 80 cents.

Is it any wonder that people become addicted to poker machines?

Then there are the inducements online gambling companies offer people, drawing the vulnerable back to betting again and again.

It is time governments ended their own addiction to gambling taxes and treated problem gambling as the public health issue it is.

At the Alliance for Gambling Reform we liken where we are at with gambling harm awareness to historical attitudes to smoking.

It’s not that long ago that smoking in bars was pervasive. You couldn’t go out without coming home stinking of cigarette smoke. Now we can socialise and enjoy ourselves without the effects of passive smoking.

Think back to when tobacco advertising was everywhere, when cricket teams played for a cup named after a big tobacco company. Having smoking associated with any sport these days is laughable.

We hope we will reach that stage when it comes to sports gambling, because the ubiquitous ads around football games and the like are literally grooming our children to become gamblers.

Disturbingly, parents report hearing their young children say their team should win because their odds are better. Yet the AFL has a contract with a large gambling company worth $10 million per year. This is at a time when there are an estimated 100 AFL players with gambling problems, two of which are reported to have run up debts of $1 million. How is this not a crisis?

The fact is that problem gambling leads to losses beyond financial ones. At its worst, gambling problems can lead to death from suicide.

I know this first hand, having ministered at funerals for people who have taken their own lives due to problem gambling. Unfortunately the question of whether gambling was a contributor to a suicide is not routinely interrogated by coroners and thus remains unreported.

Gambling harm is also linked to family violence, homelessness and mental illnesses, including depression. We’ve broken down the stigma in discussing many of these issues, but gambling remains a hidden harm.

Whenever I bring it up at a public forum, invariably people will come and tell me about their own experiences, or those of a loved one. We need to overcome this shame so that people can get the help they need.

Much can be done to minimise gambling harm.

Governments can outlaw the predatory and addictive features on poker machines. They can instigate $1 maximum bets. They can ban ATMs from pokies venues and the ability to access funds via EFTPOS in gambling rooms, reducing the amount of money people can lose due to there being extra steps involved in accessing cash.

And if they’re really serious, there will be a ban on political donations from the gambling industry. It’s ludicrous for us to be seeking change to reduce gambling harm when politicians are financially beholden to the industry.

Australia led the way when it came to many aspects of tobacco reform, including plain packaging. I call on governments to take action to knock Australia off the number one spot in gambling losses per capita. That’s not a table we want to head.

I call on Croakey’s readers, and all the participants of the #CroakeyGO on mental health in Melbourne on Thursday 1 August, to contact Premier Daniel Andrews, Treasurer Tim Pallas, Gaming Minister Marlene Kairouz, and your local member to voice your concerns about gambling harm and its impacts on our communities.

Unfortunately I will be interstate for the #CroakeyGO, but I hope many of you will attend, make connections and share your stories. I wish you all well.

• Rev Tim Costello AO is spokesman for the Alliance for Gambling Reform (supporters of the Alliance are listed here). 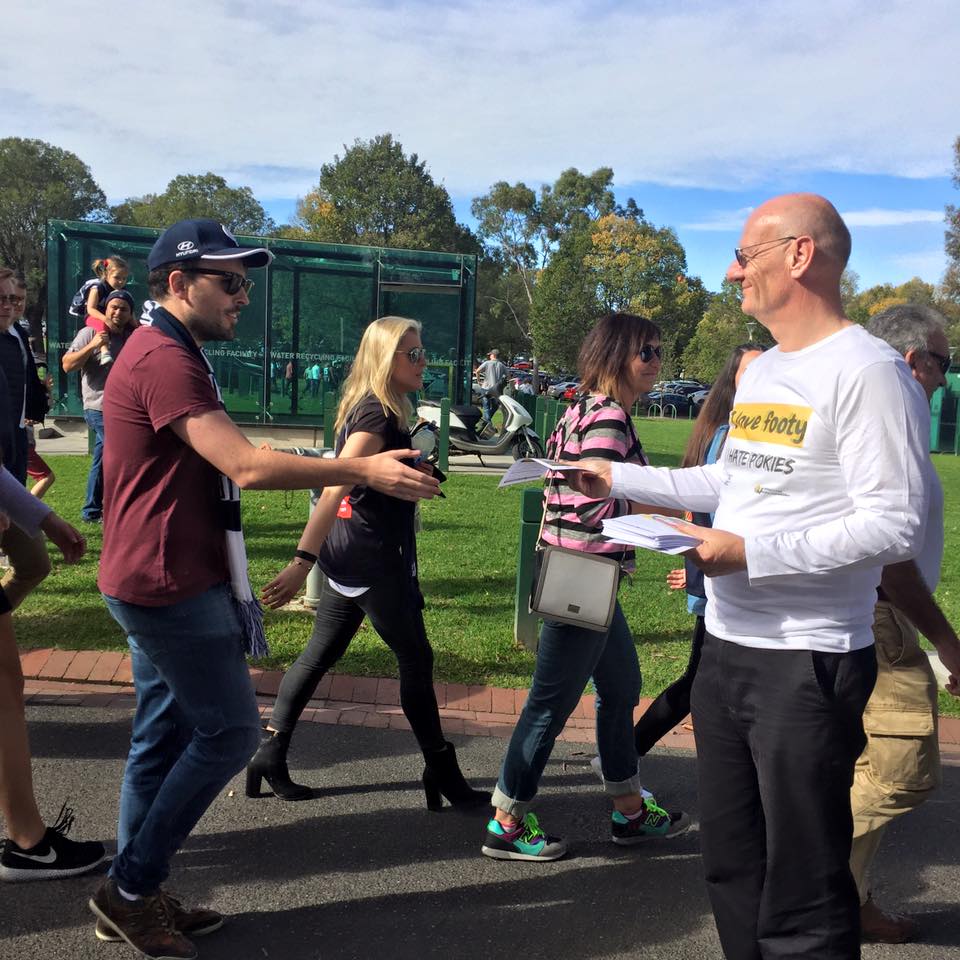 Bookmark this link to follow our coverage of the #NavigatingHealth #CroakeyGO – an act of walking journalism.

The map below gives details of how to join the event. 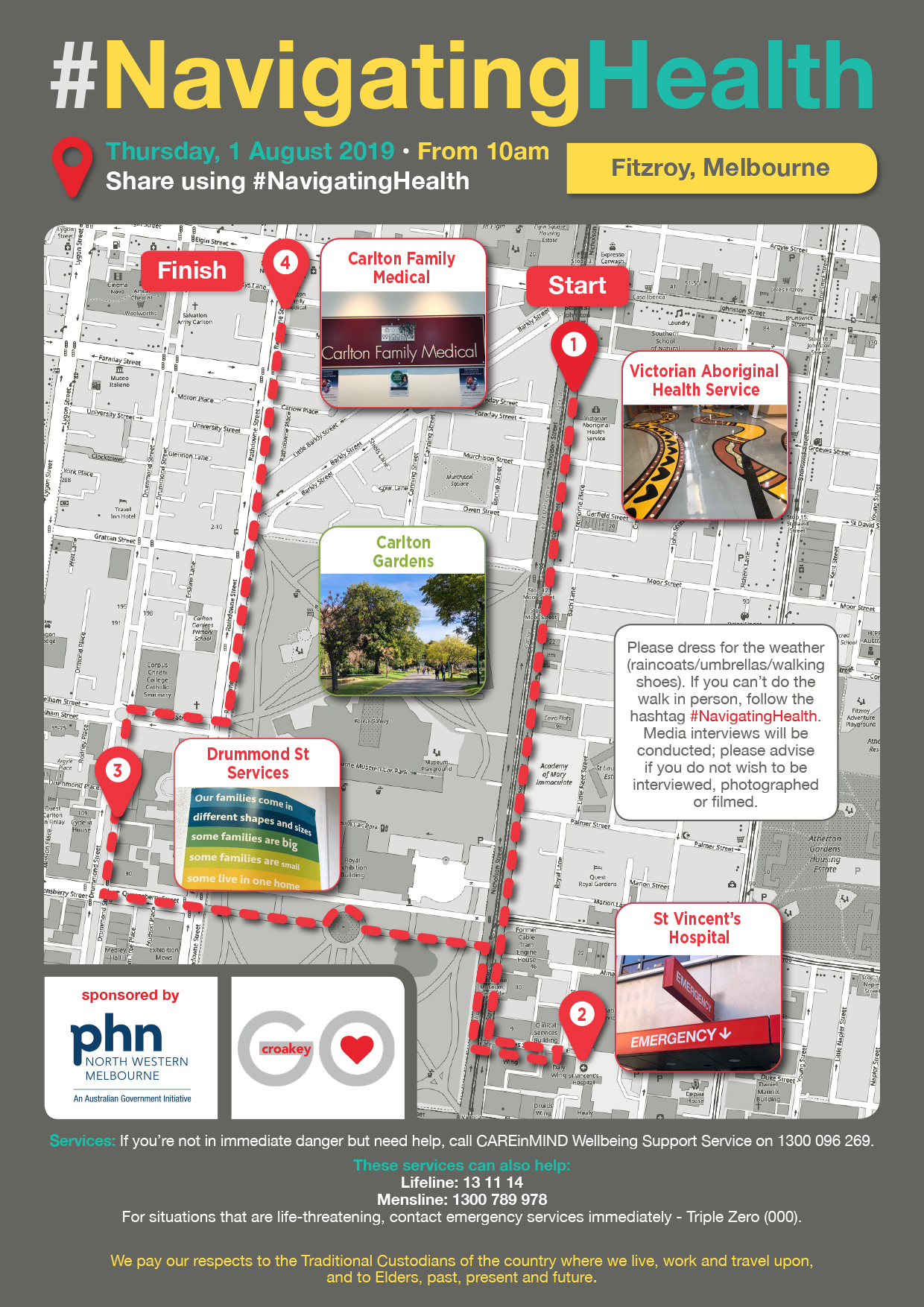 PrevPreviousThe Health Wrap: from a global focus on mental health and oral health to the latest on quality and safety in Australian hospitals
NextFirst Nations solutions for global change – a focus on “thinking” at #LowitjaConf2019Next